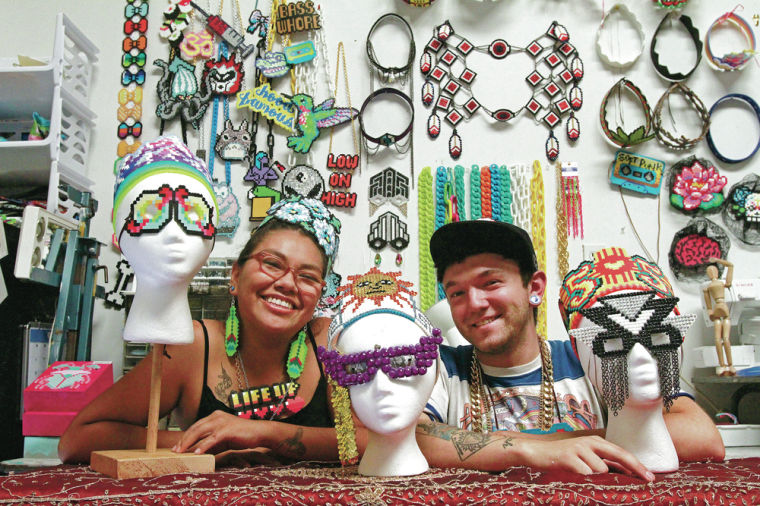 Autumn ‘B. Honey’ Gomez, 26 and Nico Salazar, 25, founded The Soft Museum three years ago. Gomez, a Santa Fe native and graduate of the Institute of American Indian Arts, has been selected as one of four Native American designers who will create a limited-edition collection for the lifestyle brand Paul Frank. Jane Phillips/The New Mexican 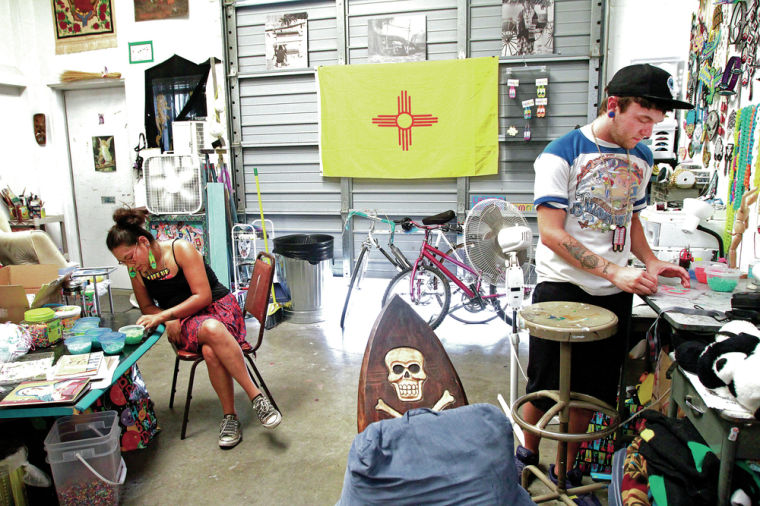 Autumn ‘B. Honey’ Gomez, 26 and Nico Salazar, 25, work in their studio on Thursday. Gomez, who founded The Soft Museum three years ago with Salazar, has been selected as one of four Native American designers who will create a limited-edition collection for the lifestyle brand Paul Frank. Jane Phillips/The New Mexican 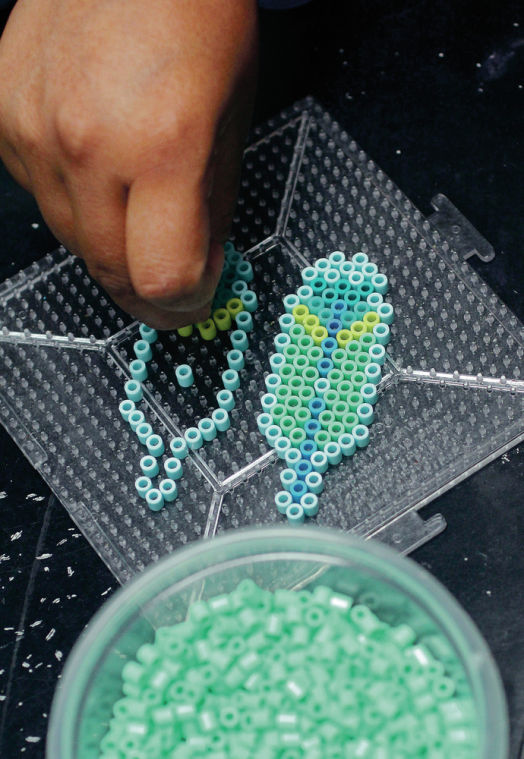 Autumn ‘B. Honey’ Gomez, 26 and Nico Salazar, 25, founded The Soft Museum three years ago. Gomez, a Santa Fe native and graduate of the Institute of American Indian Arts, has been selected as one of four Native American designers who will create a limited-edition collection for the lifestyle brand Paul Frank. Jane Phillips/The New Mexican

Autumn ‘B. Honey’ Gomez, 26 and Nico Salazar, 25, work in their studio on Thursday. Gomez, who founded The Soft Museum three years ago with Salazar, has been selected as one of four Native American designers who will create a limited-edition collection for the lifestyle brand Paul Frank. Jane Phillips/The New Mexican

When the iconic lifestyle brand Paul Frank hosted a pow-wow-themed cocktail party dubbed “Dream Catchin with Paul Frank” last September in Los Angeles — where guests were encouraged to don feathered headbands and day-glow war paint while posing with prop tomahawks and sipping drinks with names like Rain Dance Refresher and Neon Teepee — there was a swift backlash of criticism for cultural insensitivity and promoting stereotypes.

Within 24 hours, the company had removed the photos from its Facebook page and issued an apology, stating that the event “was in no way meant to disrespect the Native American Culture.”

But Jessica Metcalfe, founder of Beyond Buckskin, a blog and online boutique that promotes Native American fashion and education, challenged the company to do more.

As a result, company representatives contacted Metcalfe and Native American blogger Adrienne Keene (who also penned an open letter to the company criticizing the event) about doing just that.

The company has since reached agreements with four Native American artists who will create a limited-edition line of clothing and accessories for the brand — which is well known for items that features the likeness of its signature character, Julius the Monkey.

The launch event for the collection will be held in at the Museum of Contemporary Native Arts in downtown Santa Fe during Indian Market in August.

One of the four designers tapped to participate in the project is native Santa Fean Autumn “B. Honey” Gomez, whose father is from Taos Pueblo and whose mother is Comanche. The other three are Candace Halcro (Plains Cree/Metis tribes), Dustin Martin (Navajo) and Louie Gong (Nooksack).

Gomez and her longtime friend and business partner Nico Salazar live and work in a studio in a south Santa Fe industrial area that is home to their company, The Soft Museum.

The tiny studio features a makeshift kitchen and two “bedrooms” created using tarps and sheets of fabric. Every other spare inch is adorned the brightly colored art created by Gomez and Salazar and their friend “Maximus,” who recently joined the team.

Gomez has a degree in creative writing from the Institute of American Indian Arts, Salazar is pursuing a bachelor’s degree in studio arts at the school now. Both 2o-somethings draw and paint. They’re also interested in fashion, music, video styling and photography.

“We see no limit to our creativity,” Gomez said.

But their current medium of choice is hama beads, plastic brightly colored beads which are assembled on a peg board then heated until they fuse together. Using these simple child-marketed materials, the duo has created a line of jewelry that has a distinctive “8-bit” (pixelated) look, reminiscent of early video-game art.

“We bought a kit one night and after that it was over,” Salazar said. “We were addicted.”

The line features over-sized pendents, earrings and crowns that feature geometric designs as well as pop-culture references, including old-school cartoon characters (Teenage Mutant Ninja Turtles, for example), OM symbols and aliens. Some of the pendents — which are suspended from plastic chains — feature words such as “bass whore,” “hood famous” and “low on high.” Others, such as an angry looking octopus, hummingbird in flight and seated Egyptian figure, have a more fine-art sensibility.

“It’s everybody’s little sister,” Gomez said. “We try to reach out to every flavor.”

As the Native American of the group, Gomez is the one who has been selected to create designs for the Paul Frank project. She has created five motifs — each will be featured on a cuff bracelet, pendent and crown — which all reference landscapes, all but one of them Southwestern.

One set features greens and tree shapes, which Gomez says they represent the Taos and Mora areas and “desert mountain people.” Another is a daytime desert scene. Another depicts “twilight,” one is an ocean scene and one is “the universe.”

The pendents featured in the line are made in the shape of Julius the Monkey’s head, a subtle use of the well-known image.

The arrangement between Paul Frank and the Native designers is basically a licensing deal. The designers have permission to use the Paul Frank name and the likeness of Julius the Monkey for a year. The company will promote the line and host a launch event in Santa Fe in August. The designers get to keep whatever profits they earn from the sales of their products, but they also must bear the cost of producing the line.

For Gomez and her partners in The Soft Museum, which sells pieces mostly online, the collaboration could be a career-changing break — a picture of Gomez was wearing one of her necklaces was featured on CNN this week — and they are determined to make the most of the exposure.

Asked to discuss the issue of creative appropriation of Native images and culture, Gomez said “there is a lot of gray area.”

As an artist, she acknowledges that inspiration can come from a wide variety of sources. But as a Native American, she said, she is annoyed by careless misappropriation and stereotypes of Native people in pop culture.

Anybody can use geometric designs that give a tribal flavor to a design, she said, but using specific symbols taken from indigenous religious ceremonies is a no-no. Both Salazar and Gomez said being inspired by Native images and using them as a jumping-off point for creating unique images of their own is preferable to straight-up reproductions of images associated with Native American culture.

Knowing the significance of the symbols one is using is important, she said, as is the way the work is marketed.

Advertising something as Native or Navajo — as Urban Outfitters did when they advertised their “Navajo Flask” and “Navajo Hipster Panty” last year — is a trespass.

“If you are really inspired by Native stuff, go for it,” she said. “But be aware. It’s cooler to be a person who is worldly and respects other cultures and other people than to say ‘Yeah, I can do whatever I want.’ ”

It’s less about censorship, Salazar and Gomez said, than it is about being truly original and not stealing ideas.

Gomez said even she stays way from using traditional designs and patterns in her own work. “If I can create something new, for everybody it’s better,” she said.