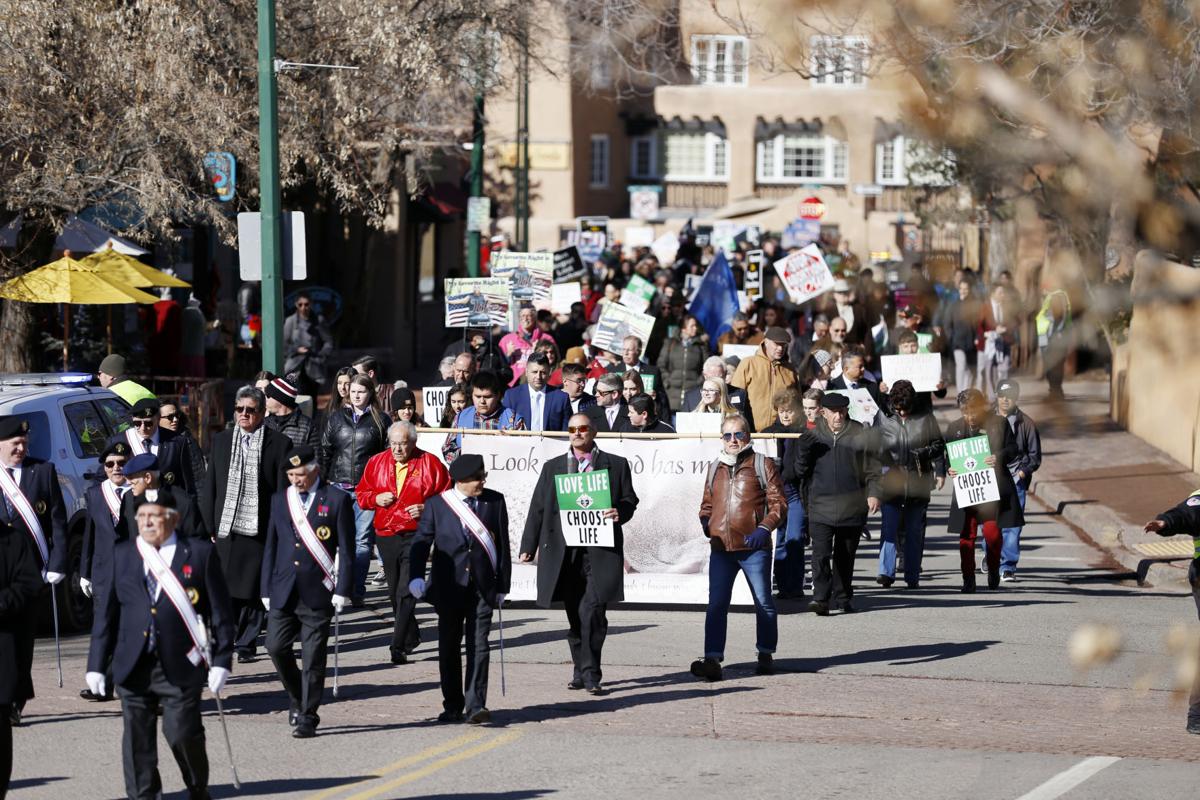 Anti-abortion protesters march to the Capitol on Wednesday. 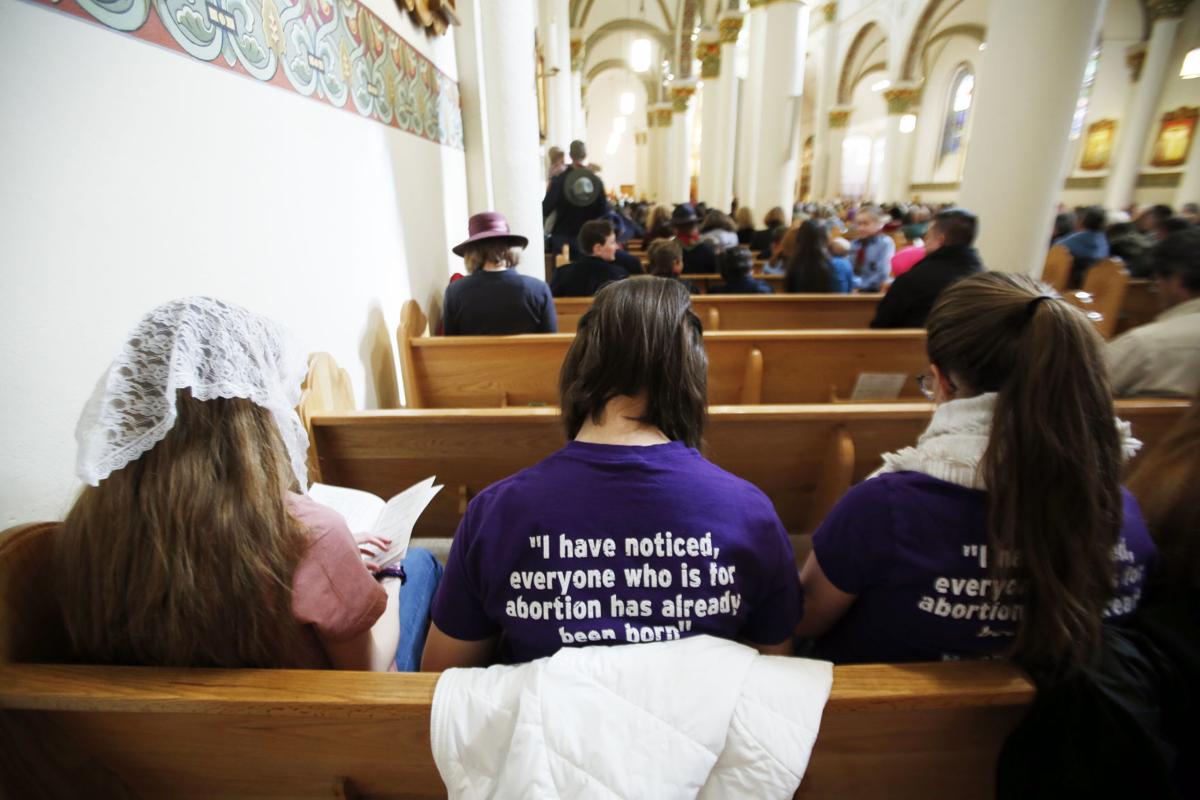 Sixteen-year-old Elizabeth Booton of Los Alamos, center, on Wednesday attends a special Mass at the Cathedral Basilica of St. Francis of Assisi that culminated in a prayer, a march up the street and a rally inside the Roundhouse. 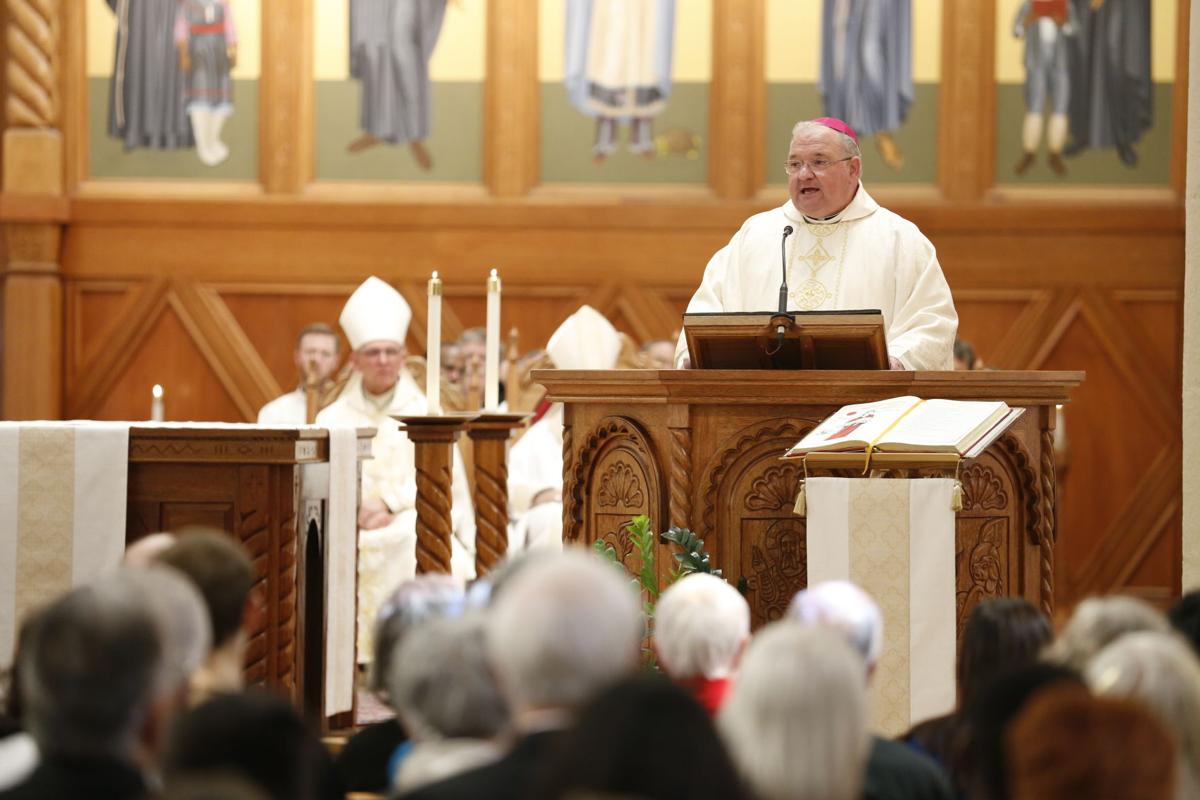 Bishop Peter Baldacchino of the Diocese of Las Cruces delivers the homily Wednesday during a special Mass at the Cathedral Basilica of St. Francis of Assisi. He called for prayers for people who seek abortions and for legislators. 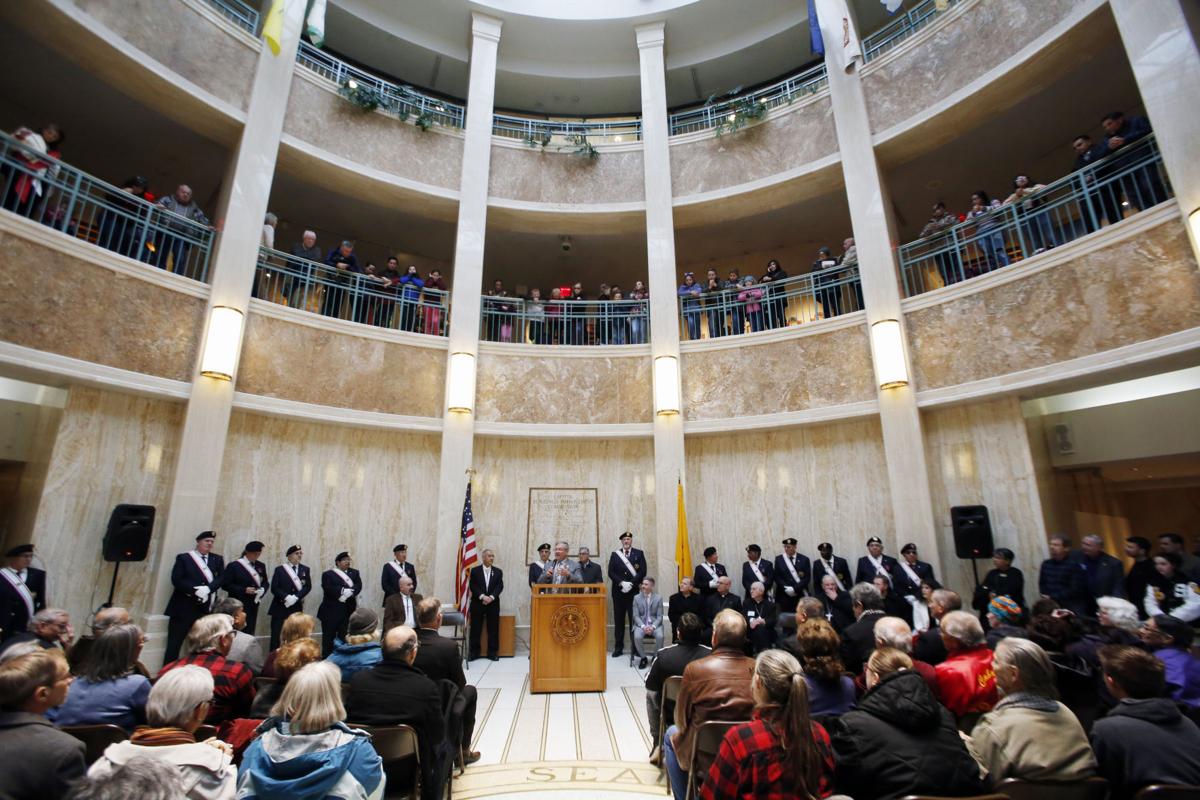 Anti-abortion protesters march to the Capitol on Wednesday.

Sixteen-year-old Elizabeth Booton of Los Alamos, center, on Wednesday attends a special Mass at the Cathedral Basilica of St. Francis of Assisi that culminated in a prayer, a march up the street and a rally inside the Roundhouse.

Bishop Peter Baldacchino of the Diocese of Las Cruces delivers the homily Wednesday during a special Mass at the Cathedral Basilica of St. Francis of Assisi. He called for prayers for people who seek abortions and for legislators.

The Capitol Rotunda was standing room only.

“We want to make the Rotunda tremble,” the Rev. Richard Mansfield said. “The shouts of people of God who love the Lord and stand for the sanctity of life.”

Shouts of “amen” and “hallelujah” echoed back from the 110 or so anti-abortion activists and church leaders who attended a worship service Wednesday morning, protesting abortion on the 47th anniversary of the landmark Supreme Court ruling in Roe v. Wade, which established abortion rights nationwide.

Preachers, nonprofit leaders and legislators told the crowd they would continue to fight legislation that would decriminalize abortion in the state.

Mansfield, a preacher at New Beginnings Church in Albuquerque, asked for forgiveness for those who’ve had abortions and asked for prayers for legislators.

Many of the groups at Wednesday’s prayer service publicly opposed House Bill 51 in the 2019 Legislature, which attempted to repeal an old New Mexico law that makes it a crime to perform an abortion.

“Our hope is to end abortion for good — forever,” said Ethel Maharg, executive director of the Right to Life Committee of New Mexico.

Vince Torres, president of Family Policy Alliance of New Mexico and a pastor at Blaze Christian Fellowship in Santa Fe, helped organize the prayer service in the Rotunda. According to its website, the group advocates for biblical policy. It is against abortion at any stage of pregnancy, does not believe transgender people should be “normalized” and believes that marriage is between a man and a woman.

“In a state with a shortage of rural health care providers, resolutions like these only create confusion and stigma, and have a chilling effect on access to safe and legal abortion,” Rushforth said in a statement.

Between speakers, attendees sang contemporary Christian music that echoed through the halls.

A few blocks away, several bishops celebrated a special Mass at the Cathedral Basilica of St. Francis of Assisi that culminated in a prayer, a march up the street and a rally inside the Roundhouse. Staff at the cathedral estimated around 900 people attended Wednesday’s Mass.

Baldacchino delivered the homily, calling for prayers for people who seek abortions and for legislators.

In the afternoon, more than 200 people gathered at the cathedral and marched to the Capitol, holding signs with slogans like “Shut Down Planned Parenthood” and “Right to Life Right Now.”

Jamie Santillanes, 43, brought her four children — ages 10, 8, 6 and 2 — from Albuquerque to march with her and her husband. She said she stands outside of clinics “to pray for the women inside.”

She said she had lost four pregnancies to miscarriages, with one occurring when she was 10 weeks pregnant.

“I saw my baby at 10 weeks with hands, feet, nose,” Santillanes said. “I’m not going to buy into their lie that life doesn’t begin at conception.”

The governor has not included a repeal of the abortion ban on the agenda for the current session.

"I knew you before you were born," God said to Jeremiah in a context completely irrelevant to birth and sexuality – and a movement within evangelicalism and Roman Catholicism to control women – all women, not just adherents – was born. Women are thought to be of inferior value to the fetuses and zygotes they carry. And, of course, Jesus never said a word about abortion.

Some things are beyond law's reach. Solon and Solomon, Moses and Maimonides, could have put their heads together to write a one-size-fits-all law to govern pregnancy and would've given up. They were wise. Let women make their own decisions. Let all these folks concerned about "the babies" go to the borders and try to look after kids in cages. Let them go to the legislature and insist on a decent education for the babies, and breakfast and lunch, to boot. Or let them insist that men keep it in their pants until they're married and have set aside enough money for the kid's first year in college before being allowed to impregnate a woman. If these folks want fewer abortions, let them make condoms and the pill freely available, and make everyone take sex ed and pass a test on it. I'd be happy to see the incidence of abortion decline. But as long as a woman or girl wants one, it should be available.

I may not share their point of view, but I share their dedication to using their First Amendment rights to promote their own beliefs and bring them to the Roundhouse.

Catholicism is not to be trusted in guiding morality, ethics, logic, or society.

Plenty of non-Catholics are against abortion.

Thank you. You are correct.

Obviously. The point is that the presence and views of catholic leaders (and any religious leaders), like those mentioned in the article, are not deserving of attention or consideration when discussing and determining civil and personal rights, such as abortion. Religion and state are rightly separated because a secular and humanistic approach is far more fair and considerate than antiquated and nonsensical discriminatory religious beliefs.

There is an inherent contradiction in the anti-abortion movement in that it is pro-rape because their position is that abortion is not to be permitted under any circumstances which encourages men to enforce their more powerful position over girls, women, and wives. When you read words of the protestors and look at the sanguinary images and videos, there is only one conclusion they wish the public to make, that there can be no reason to abort a "life" even if that "life" is a relentless rape reminder. It does not matter to these protestors if the rapist is a stranger, a parent, a relative, a husband because that must be what God wanted to happen, so women must give birth and pay the costs because the alliance of Republicans and the Pro-Birth clergy are doing everything they can to destroy the social safety net.

Only a very, very small proportion of abortions are due to rape. What about abortions for convenience?

Stop the slaughter of the most innocent lives!

An abortion is not convenient in any way.