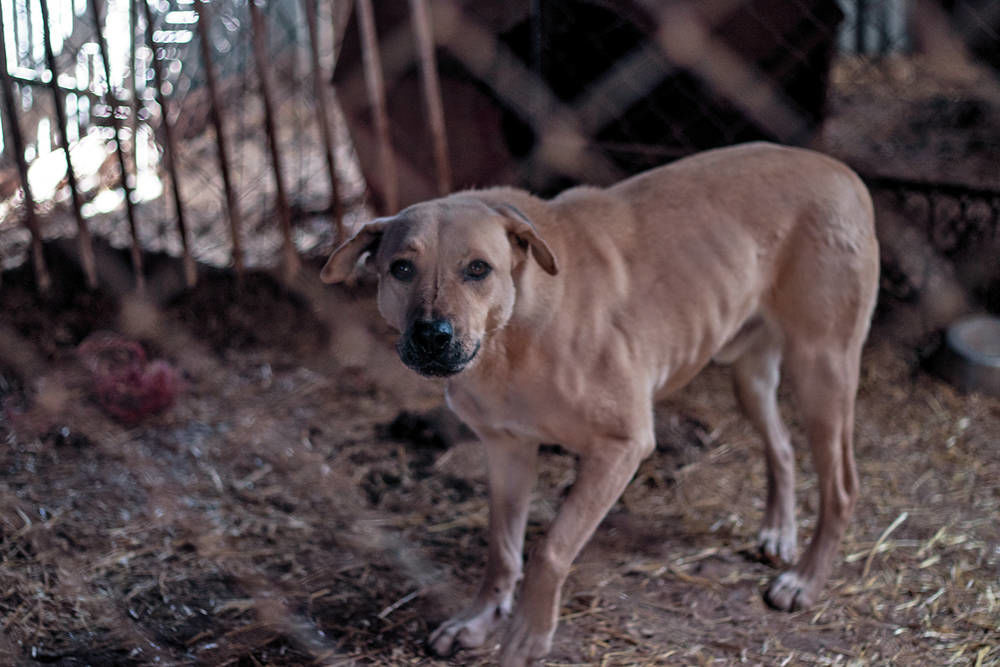 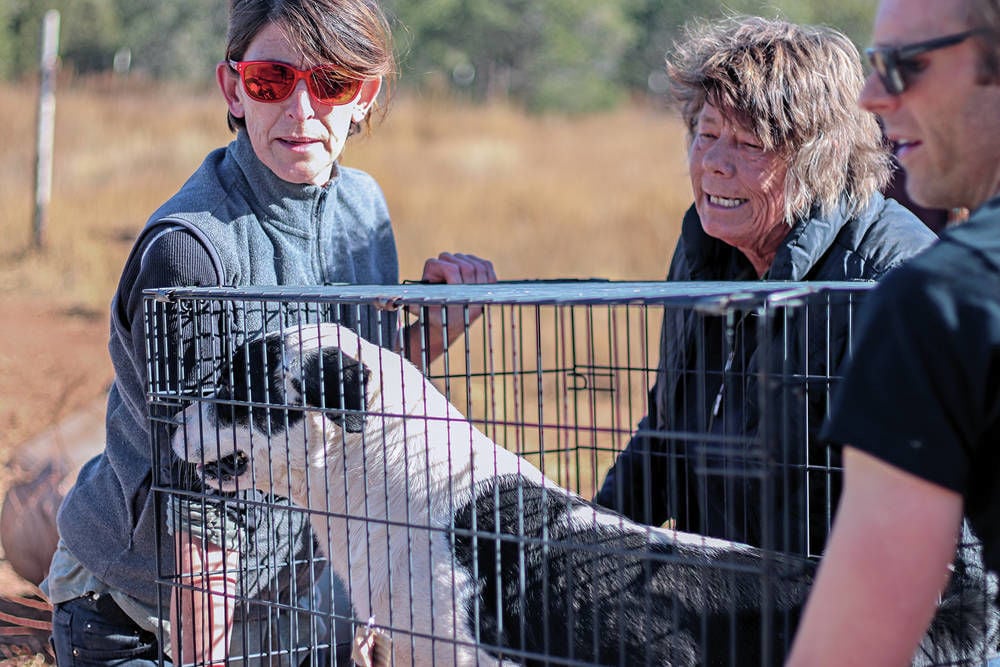 Rachel Hasted, left, and other volunteers carry a dog removed from outdoor kennels on Jessica Taylor’s Rowe property. Hasted has custody of more than 50 of the dogs that were removed and is creating a sanctuary in Madrid, where she plans to provide behavioral services for the dogs so they can be adopted. Danielle Prokop/The New Mexican 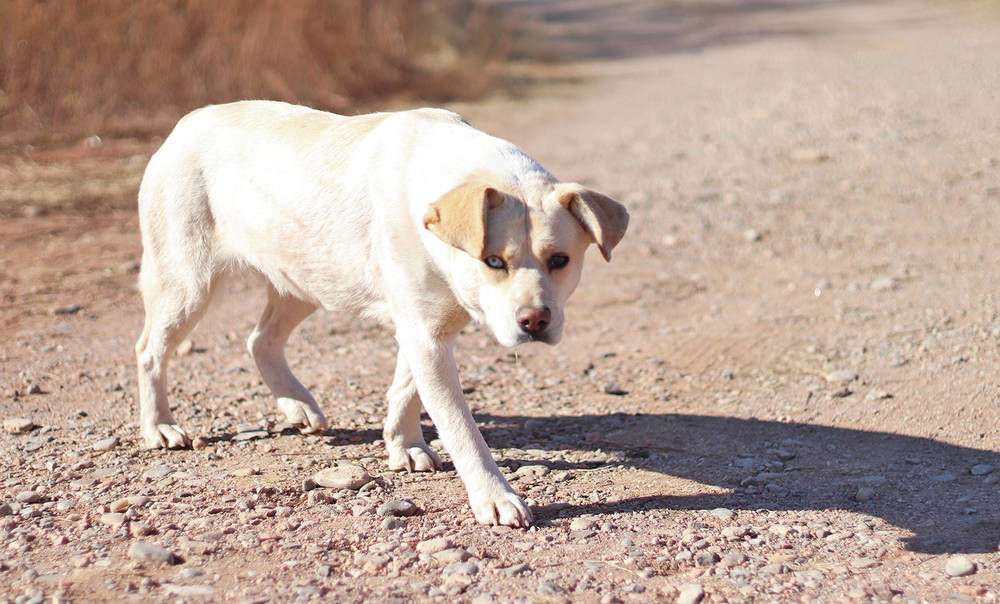 A dog running around the Rowe property looks up after going for a hot dog a volunteer laid as bait to catch her. She’s one of the 60 or so dogs that were kept on the property by Jessica Taylor, who was accused of felony dog abuse in January. Danielle Prokop/The New Mexican

Rachel Hasted, left, and other volunteers carry a dog removed from outdoor kennels on Jessica Taylor’s Rowe property. Hasted has custody of more than 50 of the dogs that were removed and is creating a sanctuary in Madrid, where she plans to provide behavioral services for the dogs so they can be adopted. Danielle Prokop/The New Mexican

A dog running around the Rowe property looks up after going for a hot dog a volunteer laid as bait to catch her. She’s one of the 60 or so dogs that were kept on the property by Jessica Taylor, who was accused of felony dog abuse in January. Danielle Prokop/The New Mexican

ROWE — The odors hit first and then lingered — dog feces and hay.

The stench at the property in Rowe earlier this month didn’t stop a dozen volunteers who were rescuing dogs that had been kept in a series of outdoor kennels and in a barn, or left running loose, by a woman who faces numerous counts of animal abuse.

The 14 dogs rounded up that day were among a total of 29 removed from the site and taken to a kennel in Santa Fe, where most waited nearly two weeks for transport to an animal sanctuary still under construction near Madrid. Many of the dogs were sent to foster homes or other facilities.

It wasn’t the first time accusations of animal neglect had been made against the property owner, 71-year-old Jessica Taylor, who is at the center of a controversy in which animal welfare advocates fear animals have been passed among unregulated sanctuaries in a cycle of neglect.

Authorities in February charged Taylor with 35 counts of abusing animals — including several felony counts — after San Miguel County sheriff’s deputies seized 26 dogs, two goats and four cats from another property she owns in nearby Ilfeld.

Taylor was allowed to remain out of jail until October, when authorities say she refused to allow volunteers onto her Rowe property to help provide food and water to dozens of dogs she continued to keep there against court orders. Deputies arrested her on suspicion of violating terms of her release.

Taylor, who a couple of weeks ago was released again from the San Miguel County jail in Las Vegas, N.M., after posting bond and agreeing not to own any animals except four cats, insists she faces “trumped-up” charges.

She says she was not hoarding pets but operating a refuge, taking in animals after other privately run sanctuaries in the area shut down amid allegations of neglect.

But animal welfare advocates and deputies allege she was mistreating the animals. The dogs weren’t getting enough food and water, deputies wrote in reports, and the premises were filled with feces.

Along with the animals seized during the Ilfeld raid in January, court records said, deputies collected carcasses of four dead dogs and a dead goat, as well as animal bones.

Now volunteers and animal welfare groups fear the scenario of animal abuse and neglect could repeat itself as they struggle find homes for the Rowe dogs.

Some of the dogs have been placed at the Animal Welfare Coalition-operated shelter in Las Vegas, which also had taken in animals seized from Taylor’s Ilfeld property. Others are waiting to be moved to the private sanctuary being built in Madrid. Rachel Hasted, who is creating the new sanctuary as legal guardian of many of the Rowe dogs, says she has spent about $50,000 so far on the rescue effort.

Before Thanksgiving, a chain-link fence at her animal sanctuary was still incomplete and there was no well on the property. Hasted, 47, has been hauling water in barrels.

Two weeks ago, Santa Fe County officials cited Hasted for failing to get a permit before starting construction of the fence and straw-bale housing for dogs.

She said she plans to live in a recreational vehicle on the land with her partner, Jason Jones, while they build kennels and other structures, which she said will take months. She bought a second RV this week for the dogs to sleep in at night while construction continues.

Officials with the Animal Welfare Coalition, which contracts with the city of Las Vegas to operate the shelter there, said they, too, have been overwhelmed by dogs — many of them malnourished and dehydrated — from Taylor’s properties. Their shelter took in all the animals seized in the Ilfeld raid, most of which have since gone to other rescue centers in various states.

“Having those 32 animals in our care from January to September really brought our organization to its knees,” said Executive Director Martina Holguin. “The strain on our financial resources, our staff, everything really was tremendous.”

In September, the shelter took in 18 more dogs from Taylor’s Rowe property. Some were pregnant.

Volunteers have been helping to feed the animals. Veterinarians from the region have examined them, vaccinated them, treated their wounds and illnesses, and assessed their behavior.

Dr. Jennifer Steketee, a veterinarian who is executive director of the Santa Fe Animal Shelter & Humane Society, said she examined the Rowe dogs in mid-August, counting 63 at the time. One big hurdle to finding homes for them, she said, is their unsocialized behavior.

“It’s concerning from an adoption standpoint,” Steketee said. “Most people want dogs that can be companions.”

She said the case illustrates the need for better oversight of animal shelters, sanctuaries and rescues.

“It is too easy for someone to obtain nonprofit status, receive support from well-meaning animal lovers and not actually provide a good quality of life for the animals in their care,” Steketee said.

Holguin said she is frustrated with a problem she believes stems from animal welfare laws that vary from county to county across New Mexico and lax enforcement of spay-and-neuter laws, which leads to unwanted pets.

Marshall Poole, president of the Animal Welfare Coalition in Las Vegas, said that while shelters are usually run by a local government or organization that contracts with a government, and must undergo a state certification process, “a sanctuary can be anything. To be frank, what Jessica Taylor was running was a sanctuary, and the conditions can range from pretty good to horrid.”

Hasted, meanwhile, said she is determined to get some of Taylor’s dogs on the path to a better life through care and behavioral services at her new sanctuary in Madrid.

“We’re just fighting to give them the chance and give them a life,” she said. “… I want to eventually adopt them all out.”

In an interview Nov. 15, just before she was released from jail, Taylor insisted the dogs on her properties — as many as 90 — “had food, they had water, they had access to the open air. They weren’t on concrete. I would say they were happy.”

She denied abusing any animals and said her efforts had been under “duress” for a decade, sabotaged by “a neighbor who wants my property and someone in the animal welfare community.”

Taylor said she had reported more than a dozen incidents to police, including dog poisonings and people cutting open kennels in Ilfeld. But officers did not record her complaints, she said.

In January, she invited San Miguel County Deputy Eric Esquibel onto her Ilfeld property to see a dog she claimed was poisoned by a neighbor. He took photos of the dog, examined the conditions of the property and later initiated an arrest warrant for Taylor.

In an affidavit, Esquibel said there was little water in the kennels and food on the ground was “spread next to feces, urine and other contaminants.” He could see the ribs and hip bones of goats, he wrote, and there were dead rats in water buckets.

Taylor disputed that. “These are police lies I’m up against,” she said in the interview.

“I don’t do things perfect,” Taylor said, “but I don’t see the county stepping in to help out animals. I know what I did, that I did good for them and that they were happy with me.”

How screwed up is this, she 'rescues' these dogs so they are not put down & then slowly allows them to die of starvation and thirst and neglect but in her twisted mind she is saving these animals. What is wrong with law enforcement allowing the situation to continue for as long as it did when they knew that there was a problem? How is she out of jail with several felony charges? If someone wants to have an animal sanctuary they need to be investigated first, where will the money come from to feed the animals? What type of kennels are provided? They also need to be examined and make sure they are playing with a full deck & not some bleeding heart activist who thinks that putting animals down is cruel despite the fact they are suffering. Anyone who is arrested for neglecting animals by letting them starve & be left out in the elements without water and live in their own filth needs to be put in a cell outside naked and fed only enough to slowly starve over months while laying in straw full of feces

"Animal-hoarding cases typified by exploiters are the most serious and difficult to resolve. They involve individuals with sociopathic characteristics who acquire animals to serve their own needs, with little true attachment to them. These individuals appear indifferent to the suffering of their animals, and they lack empathy for humans and animals. They display extreme denial of any problems and flatly reject authority or any outsider’s legitimate concerns. As do the mission-driven animal hoarders, exploiters believe their knowledge is superior to anyone else’s, and they display an extreme need to exert control over their animals. Exploiters display many characteristics of antisocial personality disorder, including superficial charm and charisma; they are manipulative and cunning, narcissistic, and appear to lack guilt or remorse. The absence of emotional attachment to their animals suggests that these individuals may not fit the diagnostic criteria for HD (Hoarding Disorder). https://www.psychiatrictimes.com/obsessive-compulsive-disorder/hoarding-animals-update