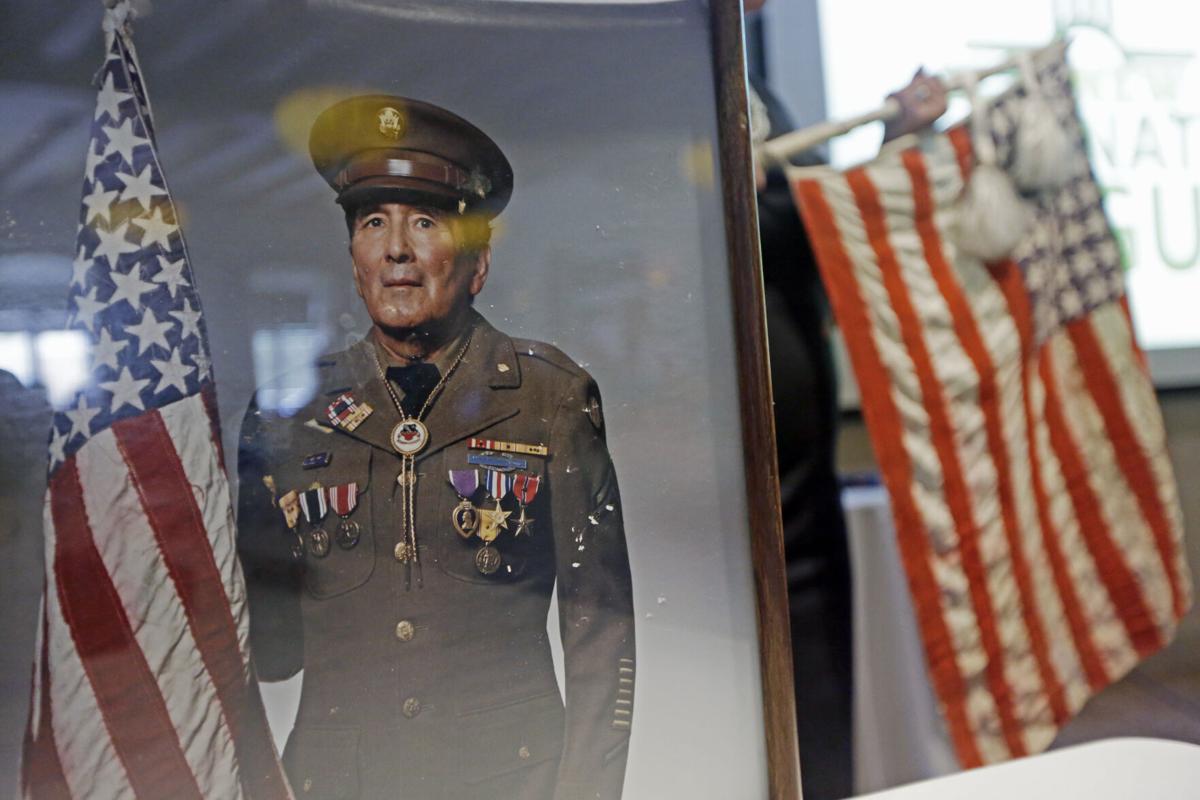 A photo of World War II veteran Jose Quintero of Albuquerque is seen with the American flag he made while in a prisoner-of-war camp in Japan. Quintero, who died in 2000, gave the flag to Lt. Gen. Edward Baca, who died a year ago. Baca’s family handed over the flag to the Smithsonian National Museum of American History during a Wednesday ceremony in Albuquerque. 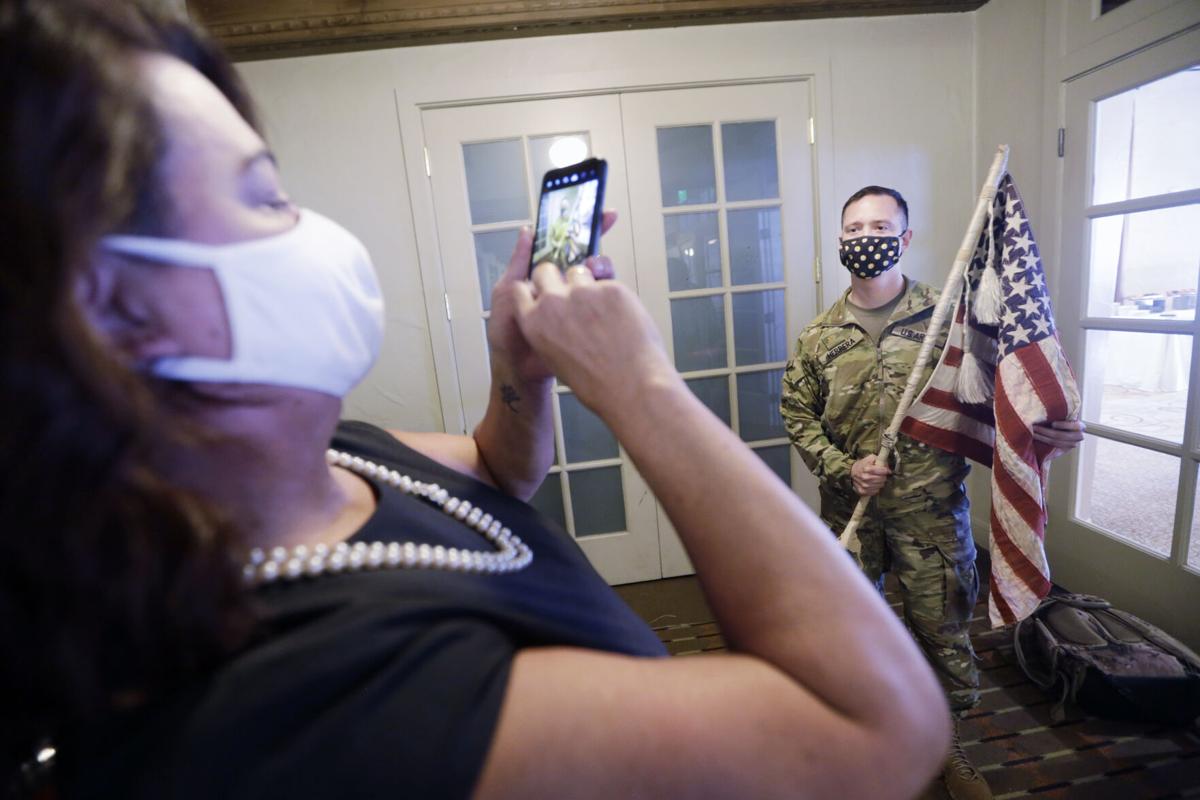 Karen Nielsen takes a photo Wednesday of Army National Guard Maj. Louis Herrera with the flag Jose Quintero made while a prisoner of war in Japan. Nearly 30 years ago, Quintero gave the flag to Nielsen’s father, Lt. Gen. Edward Baca. 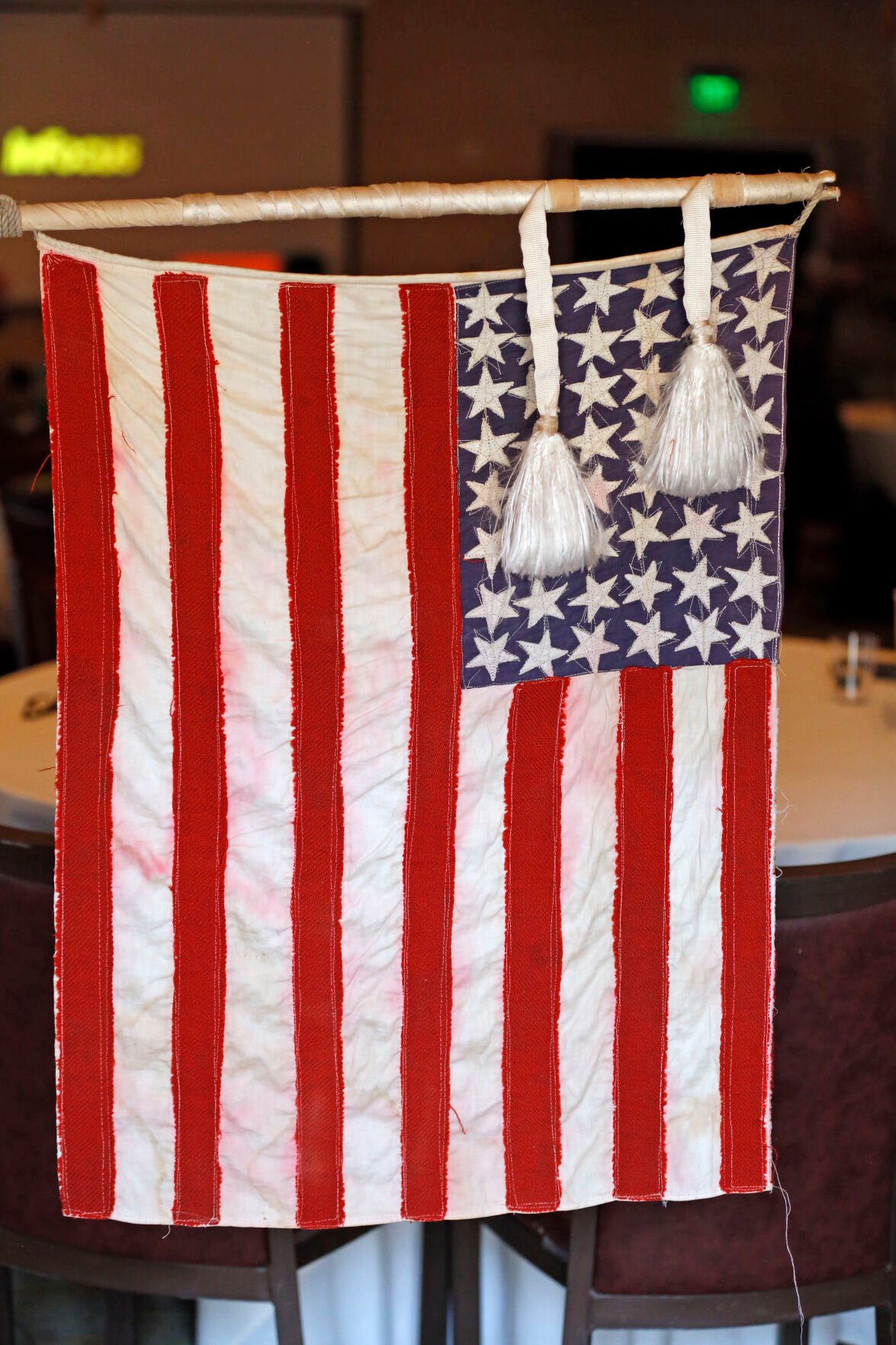 Jose Quintero, who was captured after U.S. forces surrendered on Corregidor Island in the Philippines in 1942, made this American flag out of blankets, bedsheets and dungarees while he was a prisoner of the Japanese for more than three years during World War II. 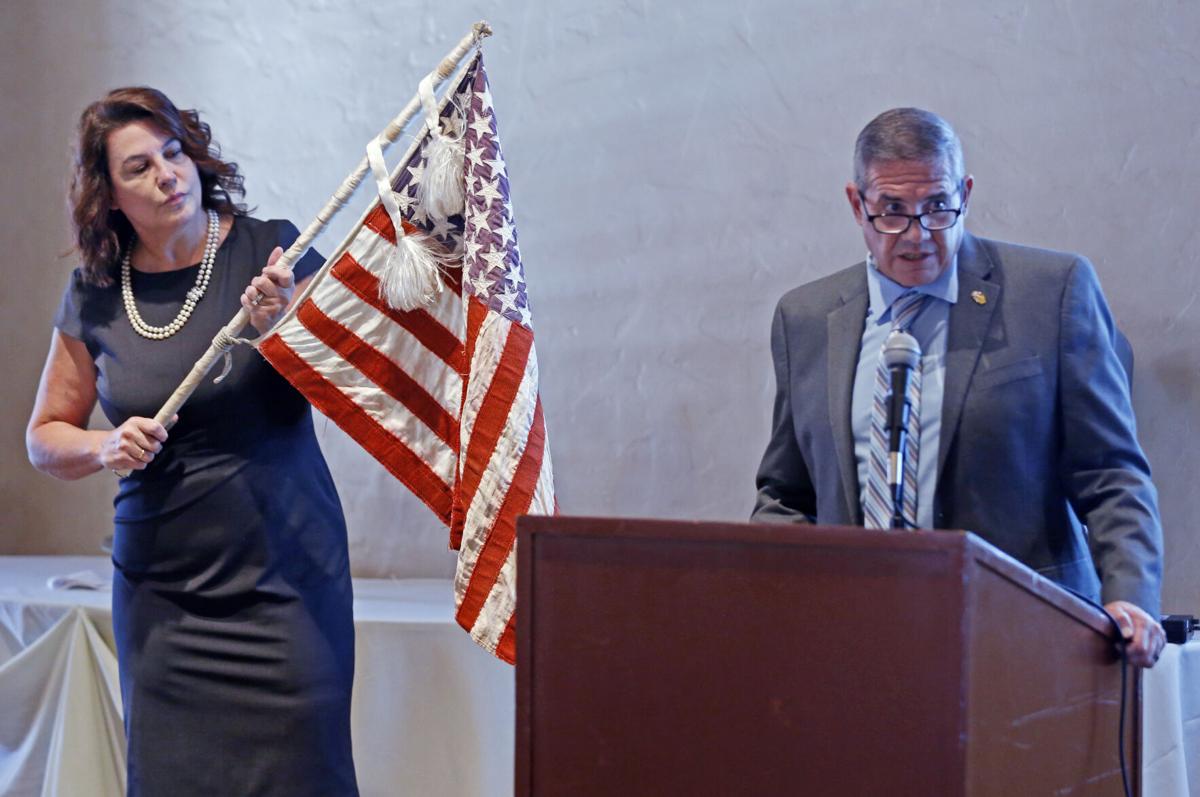 A photo of World War II veteran Jose Quintero of Albuquerque is seen with the American flag he made while in a prisoner-of-war camp in Japan. Quintero, who died in 2000, gave the flag to Lt. Gen. Edward Baca, who died a year ago. Baca’s family handed over the flag to the Smithsonian National Museum of American History during a Wednesday ceremony in Albuquerque.

The American flag Karen Nielsen firmly held in her hands did not look nearly 80 years old.

Still, it was obvious this was a homemade flag. The red material came from a blanket, the white fabric from sheets. And the blue was fashioned from a pair of dungarees worn by a soldier in the Philippines campaign of World War II.

The flagstaff was constructed out of a bamboo prod Japanese soldiers used to herd U.S. prisoners along — and beat them if they disobeyed or lagged behind.

The flag, made by Albuquerque’s Jose Quintero when he was fighting to survive in a Japanese prisoner-of-war camp, has come to symbolize American spirit and patriotism. Quintero gave the banner to the late Lt. Gen. Edward Baca, then the adjutant general of the New Mexico National Guard, nearly 30 years ago.

On Wednesday, Nielsen — Baca’s daughter — held the flag one last time before preparing to turn it over to the Smithsonian National Museum of American History in Washington, D.C., where it will become part of its collection of military artifacts.

“It feels very sad to me,” Nielsen said just minutes after a brief ceremony commemorating the flag’s history and journey at the Hotel Andaluz in Albuquerque. “I’ve held it with so much pride.

“Now,” she added, “letting it go is like letting my father go.”

Baca died a year ago; Quintero in 2000. The two men met in the mid-1990s when Baca was speaking at an Albuquerque-based dinner honoring Bataan campaign veterans. Quintero, who for decades had kept the flag safely sealed in his closet at home, gave it to Baca at that event and told him the story of its background.

Baca, who grew up in Santa Fe, carried the flag with him as he traveled the world, talking about New Mexico’s military history, Hispanics’ role in that history and Quintero’s flag. Baca gave one such presentation at the Smithsonian in the mid-1990s and, according to his children, promised to give the flag to that museum once he died.

Jennifer Jones, curator of the Armed Forces History Division at the Smithsonian, said she is not yet sure when or how the flag will be displayed because of the restrictions brought on by the coronavirus pandemic. But she noted: “We have nothing like this. This flag is unique to us and our collections.”

Quintero’s military story began in January 1941, when the Texas-born son of Mexican immigrants joined the U.S. Army. Within a year, he found himself fighting the Japanese in the Philippines, where, he once recounted, he spent a lot of time avoiding being blown up by bombs.

Quintero’s actions on Corregidor earned him a Silver Star, among other honors. After Corregidor’s surrender, Quintero was first held in a prisoner of war camp in the Philippines before being transported on a “hell ship” to the Niigata prisoner-of-war camp in Japan.

“I so dearly loved watching Old Glory reach for the sky,” Quintero recalled for that book. “I love my country and have much respect for what it stands for and represents. When our flagpole was destroyed, I made a pledge to myself that I would someday wave the Stars and Stripes in the faces of the Japanese.”

He got his chance in Niigata, where he worked with a Canadian POW who had lost both legs in the war to fashion an American flag. Quintero kept it hidden in a hole below the floorboard of his bed.

By Quintero’s account, the Japanese in the camp received word of their nation’s forthcoming surrender on Aug. 14, 1945. He dug up the flag and began running around the camp “like a madman” waving it around. When he heard the sound of an approaching American airplane, he climbed to the roof of the nearest building, where he became a human flagpole, proudly hoisting Old Glory in the wind.

“As the plane approached closer to the camp the bomb bay doors opened,” Quintero recalled. “As the plane passed over the camp the pilot dipped his wings from right to left. After much more celebration I was told by several POWs that the pilot was acknowledging that he had spotted me waving the flag.”

Brian Baca, a retired military officer who is Edward Baca’s son, said during Wednesday’s event that had the Japanese discovered the flag before that day, “It would mean not only instant death to him [Quintero] but his entire squad. They would have been lined up and executed.”

After the war, Quintero moved to New Mexico because he had made so many friends with local soldiers who fought and endured the Bataan and Corregidor campaigns. He got a job as a hospital technician in a veterans’ hospital, where he met his wife, Gladys. The two married in 1952 and had four children. He retired from his job in 1978 and died at age 82.

Reached by phone Wednesday, author McClure said it’s “terrific” the flag is going to the Smithsonian.

“The flag is a nice symbol of a generation that had amazing determination and grit,” he said.

Thank-you SFNM, for another powerful profile on -both- true Patriotism and the Human spirit. For far too-long New Mexico's vast contributions to the U.S. Military have been ignored.

My deepest respects to the families of all U.S. Veterans, past and present.

Incredible bravery, so badly needed in our country today. So good to see it preserved and honored forever.