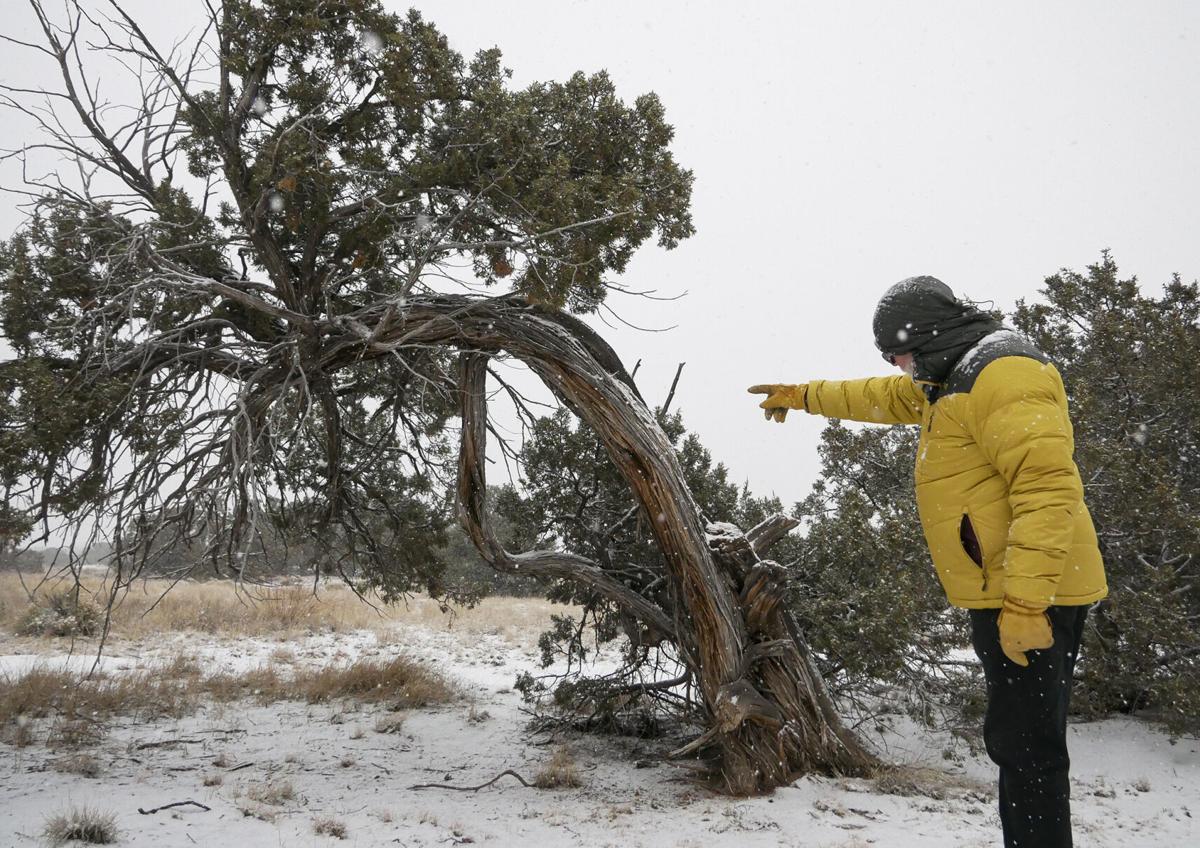 James Mason, left, points to a juniper bent at an unusual angle with a branch turned in a nearly 90-degree angle beneath it, and Stephanie Levy points to intentional scarring on a piñon tree on their property in Eldorado. The couple sought expert guidance on trees that were determined to be culturally significant. 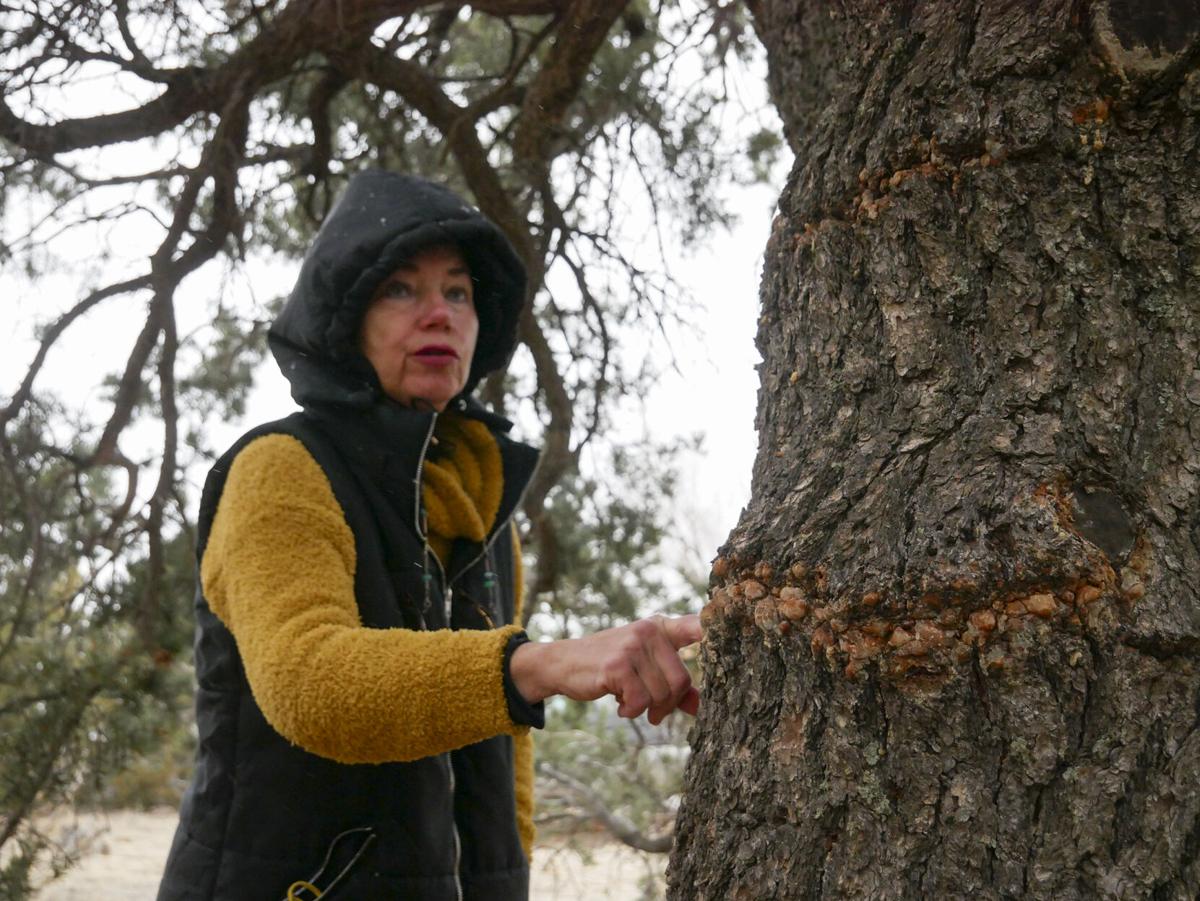 Stephanie Levy points the intentional scarring on a piñon pine tree on her property in Eldorado. She says Native Americans would cut the trees to release resin, which was used for glue. Ute elder  James Jefferson, who visited the site, believes the piñon pine to be a medicine tree. 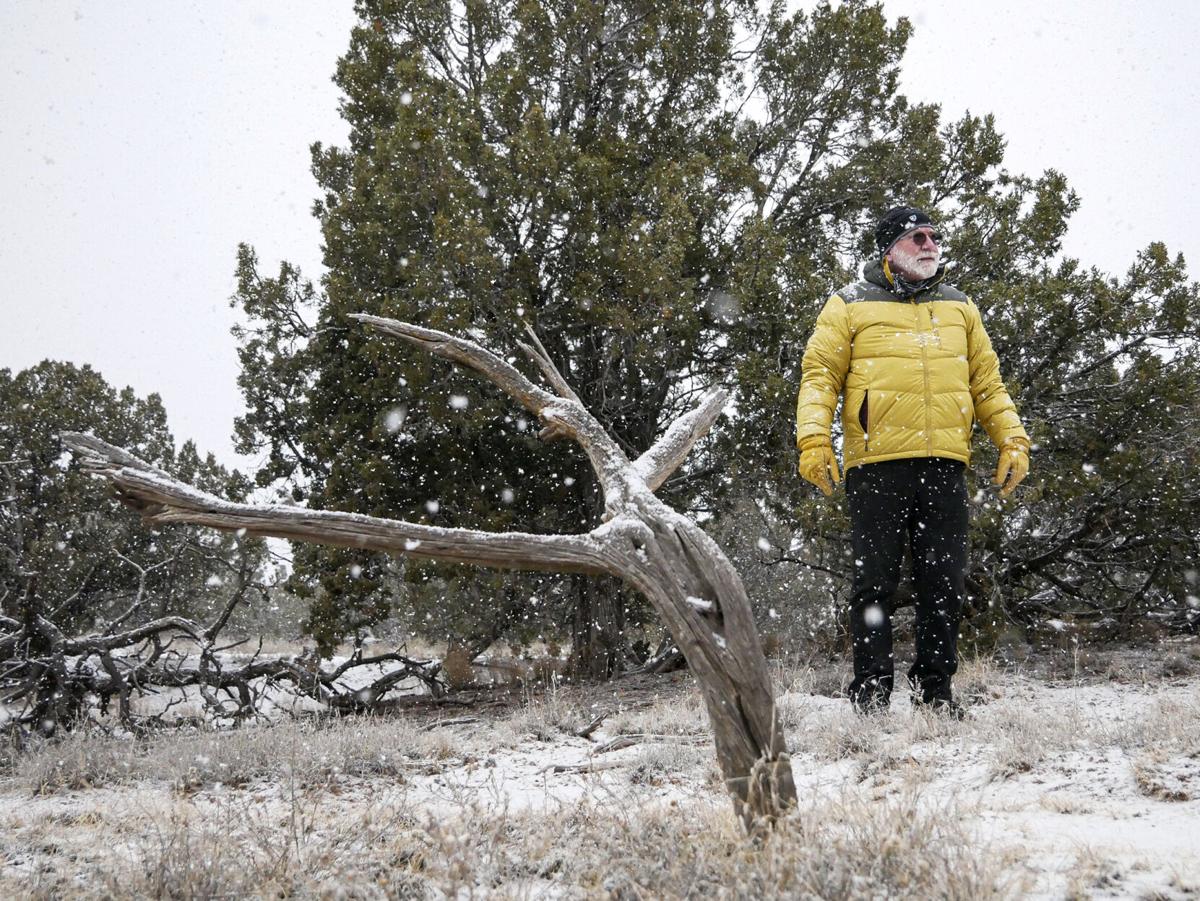 A three-branched stump sticks out of the ground in a clearing on the property of James Mason, pictured, and Stephanie Levy in Eldorado. Mason, who works with the Vanishing Treasures Program for the National Parks Service, found one branch points due north, another due west, and a third is directly in line with the Jemez Mountains and Chaco Canyon. 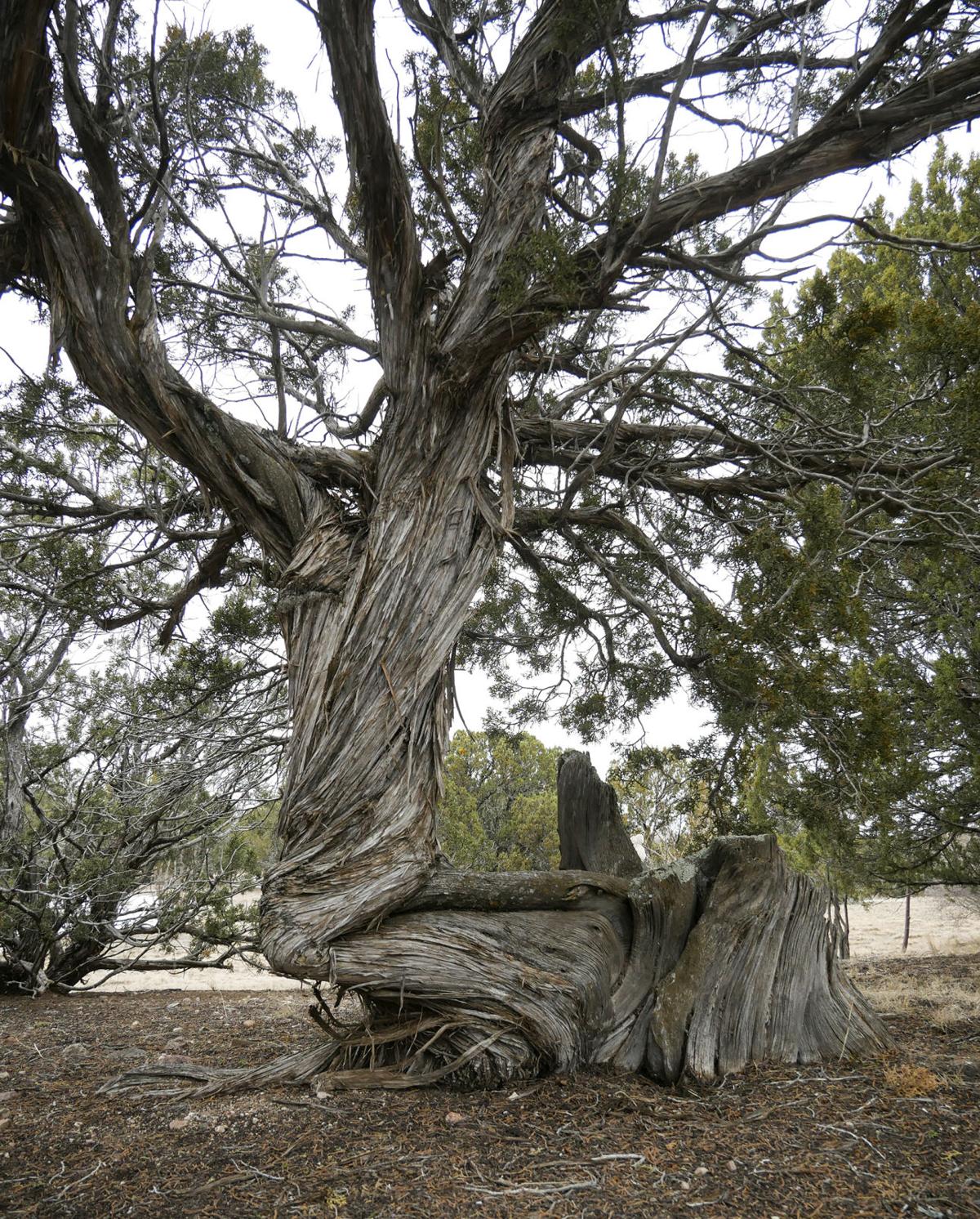 The branch of a juniper tree follows along the ground before making an unnatural 90-degree turn toward the sky on the property of Stephanie Levy and James Mason in Eldorado. The couple says the tree was modified by Native Americans hundreds of years ago.

James Mason, left, points to a juniper bent at an unusual angle with a branch turned in a nearly 90-degree angle beneath it, and Stephanie Levy points to intentional scarring on a piñon tree on their property in Eldorado. The couple sought expert guidance on trees that were determined to be culturally significant.

A three-branched stump sticks out of the ground in a clearing on the property of James Mason, pictured, and Stephanie Levy in Eldorado. Mason, who works with the Vanishing Treasures Program for the National Parks Service, found one branch points due north, another due west, and a third is directly in line with the Jemez Mountains and Chaco Canyon.

Stephanie Levy and James Mason thought something was up almost immediately when they moved to Eldorado — something about the trees.

“We looked at that first tree in front of our house and were like, this is not normal,” Levy said. “Somebody altered these.”

With some help from experts and through their own personal research, Levy and Mason discovered their property is full of signs of an ancient society. The most notable are the culturally modified trees.

Mason, who works with the National Park Service’s Vanishing Treasures Program, which supports the preservation of traditionally built architecture throughout the western U.S., has a trained eye for artifacts. In addition to the trees, he said, he has found turquoise on the grounds around the couple’s home and stones that appeared useful.

“I found tools — hammers and little knives that fit right into your hand,” Mason said. “The two trees in front are so beautifully altered. They’ve been twisted and contorted in this configuration for hundreds of years.”

A male one-seed juniper has a branch pointing skyward. Another grows parallel to the ground from a stump and then takes a 90-degree shift upward.

Elsewhere on their 3-acre property, Levy said, they found circular clearings surrounded by junipers, more tools and one stump with branches pointing north, west and toward the Jemez Mountains and Chaco Canyon.

The couple sent pictures of the culturally modified trees to the Association for Native American Sacred Trees and Places, which sent four group members to visit the property in June. Among them were Ute elder James Jefferson and John Anderson, who wrote the books Native American Prayer Trees of Colorado and Ute Indian Prayer Trees. Anderson says the Ute, Comanche, Cherokee and Jicarilla Apache tribes all modified trees for five reasons: trail marking, medicine, burials, storytelling and ceremonies.

The team determined a piñon on the Eldorado property was a medicine tree over 150 years old. They noted places where bark had been peeled off.

Levy said the portion of the tree where bark was removed may have corresponded to the part of a body that was in need of healing. The medicine tree also appeared to have branches cut for directional purposes, she said.

Since they discovered the sacred trees on their property, the couple said, they’ve also noticed firewood with potentially human-made peels and have encouraged other homeowners to examine their own properties for signs of Indigenous culture.

Mason said he believes the trees in Eldorado are growing along an ancient trade route from the Galisteo Basin to Chaco and Mesa Verde.

“Beyond my normal work with the Park Service, I want to put together some of these trade routes,” Mason said. “I think we should all be looking around a little more carefully because this sort of history is all around us.”

150 year old medicine tree puts it at 1870. Pretty sure that the trade route was history by then. Not saying it's not true, but color me skeptical.

Thank you for this most interesting article. It is fascinating! I highly respect the Native American culture; they have much to teach us about how to value nature.

Living in New Mexico is full of depth and wonder. This landscape has prehistory written all over it. People who have moved here recently might take time to learn about the cultural history of this place. It is unlike any other place in the US and we need to protect the traces of the past.

During the early 1960's students and professors spent a few summers removing both pinions and junipers on my uncle's ranch,what is now Eldorado. The purpose was to increase grazing area. This was, ultimately, considered a failure. Replaced from this deluding were multitudes of cholla.