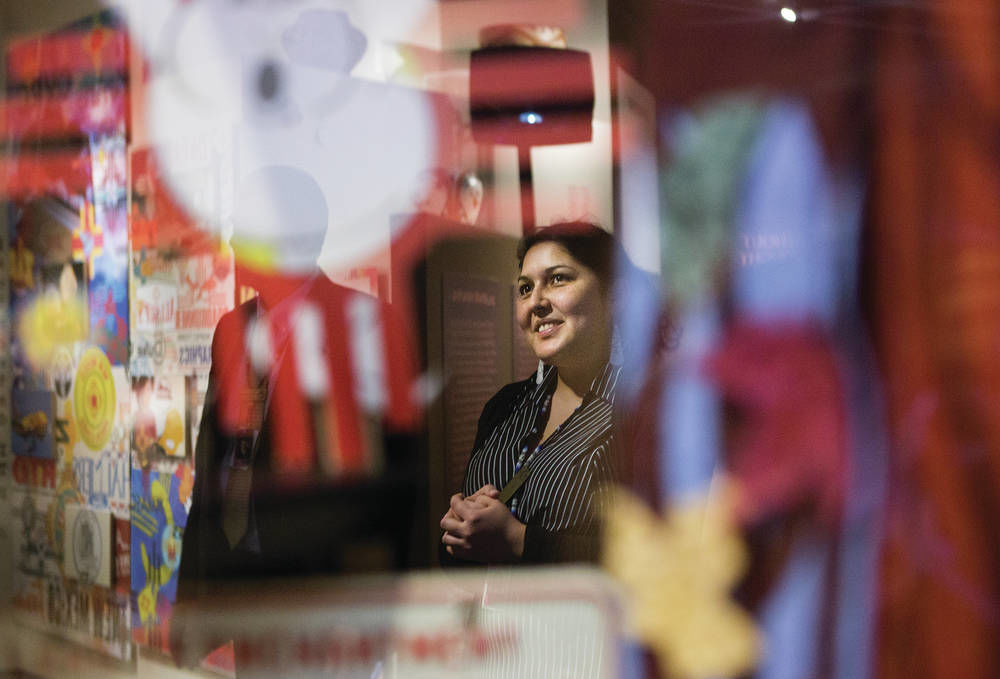 Rachel Moore, who curated Ours: The Zia Sun, an exhibition at the Indian Pueblo Cultural Center in Albuquerque, is reflected in a display of zia symbols on Thursday. Olivia Harlow/The New Mexican 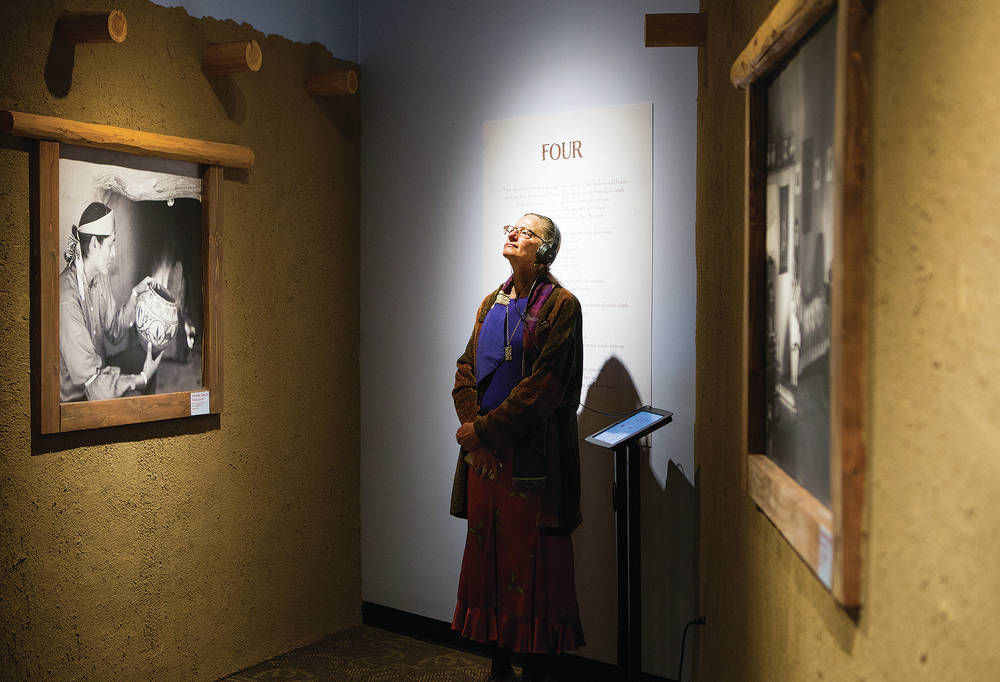 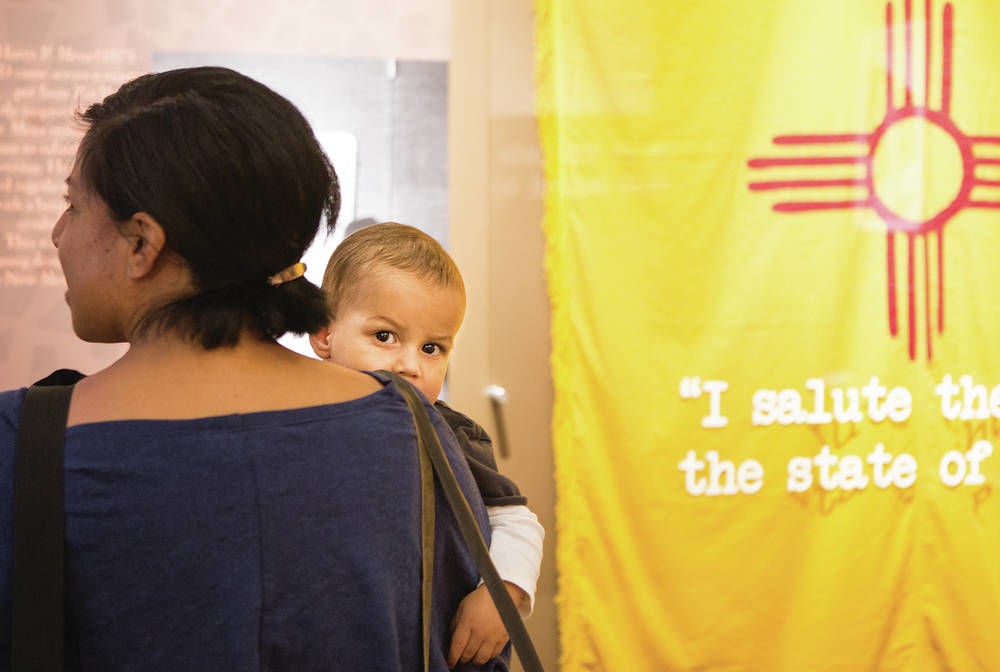 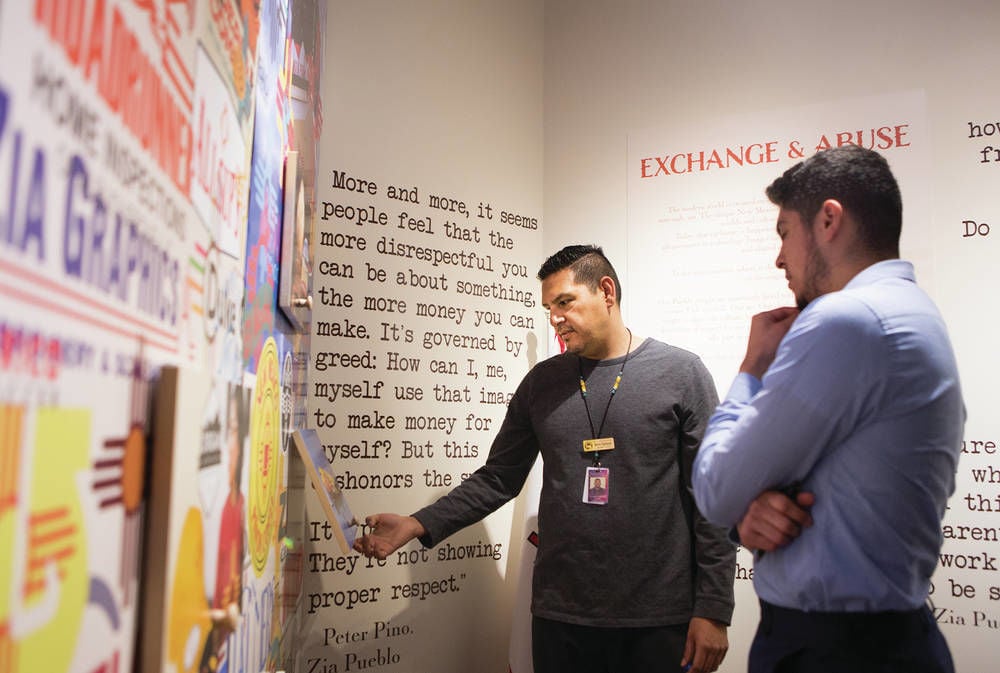 Wayne Gaussoin, assistant curator of Ours: The Zia Sun, shows a visitor elements of the new exhibit during a preview at the Indian Pueblo Cultural Center in Albuquerque on Thursday. Olivia Harlow/The New Mexican 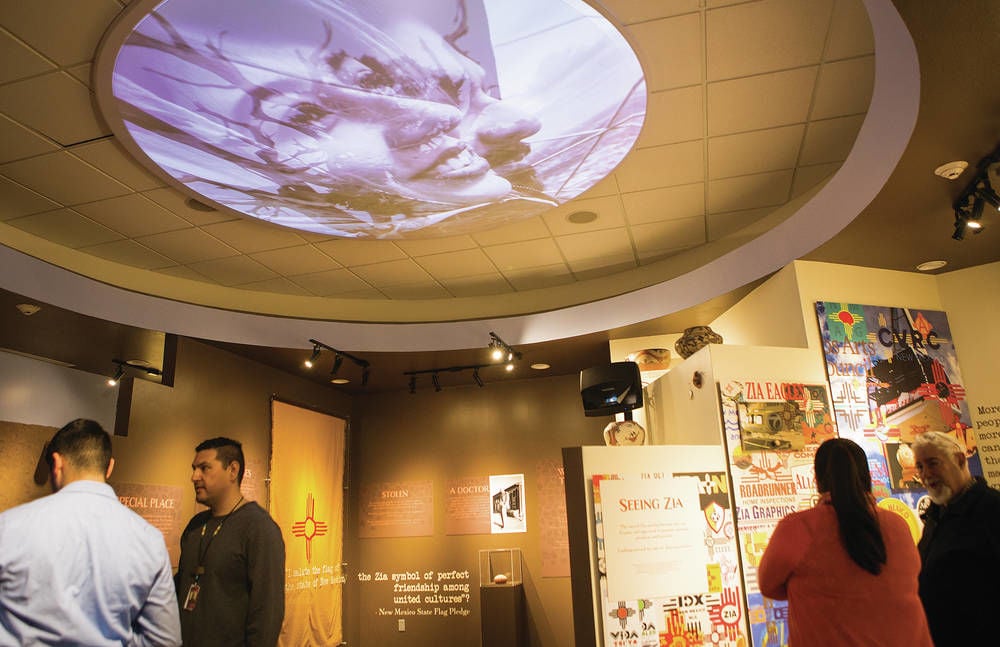 Rachel Moore, who curated Ours: The Zia Sun, an exhibition at the Indian Pueblo Cultural Center in Albuquerque, is reflected in a display of zia symbols on Thursday. Olivia Harlow/The New Mexican

Wayne Gaussoin, assistant curator of Ours: The Zia Sun, shows a visitor elements of the new exhibit during a preview at the Indian Pueblo Cultural Center in Albuquerque on Thursday. Olivia Harlow/The New Mexican

But many who sport the ubiquitous zia are not aware of the icon’s origin or intended meaning.

A new exhibit at the Indian Pueblo Cultural Center in Albuquerque, titled Ours: The Zia Sun, seeks to change all that — in part by tracing the zia’s history and exploring its continuing evolution. Most important, organizers say, the gallery aims to address issues of appropriation and educate visitors about respect for the symbol’s original creator: Zia Pueblo.

The history is fascinating. A wall at the exhibit states that in the late 1800s, a sacred pot with the first known depiction of the iconic sun was stolen from Zia Pueblo, 35 miles northwest of Albuquerque. Years later, the item somehow ended up in the hands of Andrew Dasburg, an art collector and cubist painter from Taos.

When Harry P. Mera — a physician who settled in Santa Fe in 1922 and helped establish the Indian Arts Fund — came across the artwork while browsing Dasburg’s collection, he immediately fell in love with the imagery.

Mera and his wife later participated in a design competition that would determine New Mexico’s state flag in 1925. (Before that time, the unofficial flag was blue, with the words “New Mexico” written diagonally across it and a miniature U.S. flag in the upper left corner.) Referencing the sacred pot, the couple submitted a stitched red zia across a yellow cloth to the judging committee — an action that would transform a sacred Pueblo image into an emblem that defined the Land of Enchantment.

Moore said the goal of the exhibit — which runs through Oct. 20 — is to know the full history of the zia symbol in New Mexico, while also prompting “questions to yourself of what is appropriation.”

Ours: The Zia Sun is composed of about 30 objects and approximately 100 digital submissions. It also features an audio recording that explains the symbol’s meaning, a time-lapse projection on a ceiling of zia themes and a short video that interviews locals about their knowledge — or lack of — surrounding the zia’s background.

While visitors and organizers say the exhibit is small, “It packs it all in,” said Joe Sabatini, a longtime volunteer at the center.

“It presents all the aspects — How many ways [the zia is] used, the legal issues, the cultural appropriation issues. … It’s fair,” he said.

Boyce said she’s used the zia “derivatively” in her artwork over the years — sometimes in unintentionally disrespectful ways. Learning more about any cultural and historic symbol, she said, helps “recognize where life has taken us astray.”

“Whether that’s a lack of education or respect, we have to admit that,” she added. “It’s good for us to make these inquiries.”

One common question the exhibit seeks to answer is: What does the zia mean?

In a short hallway, visitors can listen to a recording of former Zia Pueblo Gov. Peter Pino interpreting the design.

For decades, the Zia people, or Tsi’ya, have tried copyrighting the iconic zia sun — an effort Moore says is “not going to happen for them.”

Despite numerous laws meant to protect original ideas from competition, as well as give rights specifically to Native Americans — the Trademark Act of 1946, Copyright Act of 1976, American Indian Religious Freedom Act of 1978 and the Indian Arts and Crafts Act of 1990 — Moore said commercialization has propelled the zia sun too far into mainstream.

A 2012 memorial in the House of Representatives acknowledges the zia sun as a sacred emblem from the Zia Pueblo, and a 2014 Senate memorial states New Mexico’s state flag represents Zia culture. But Moore said the design remains heavily exploited — in New Mexico and around the world.

“It should be protected, but it’s not,” she said. At the very least, she said New Mexicans should “recognize Zia is an actual living culture.”

In a corner of the exhibition room is a slideshow of colorful tattoo collages, a zia with a ghost emerging from its center, vibrant graphics with zia-shaped eyeballs and beer coasters with the zia logo.

Moore said the use of the symbol for tattoos and alcohol — such as etchings on shot glasses or logos — can be off-putting to the Zia Pueblo people because it “stands against their cultural beliefs.”

She explained that especially when the symbol is altered, “that’s when it becomes hurtful. … It loses its meaning when you’re slapping something else on top of it.”

However, Moore said she’s not sure how to define when personalizing the zia crosses the line. After all, she said, it’s become significant to “every New Mexican. … Everyone uses it in their own way.”

What: Ours: The Zia Sun is a small exhibit dedicated to the history and evolution of the iconic zia symbol, which originated from the Zia Pueblo.

When: The exhibit runs through Oct. 20.