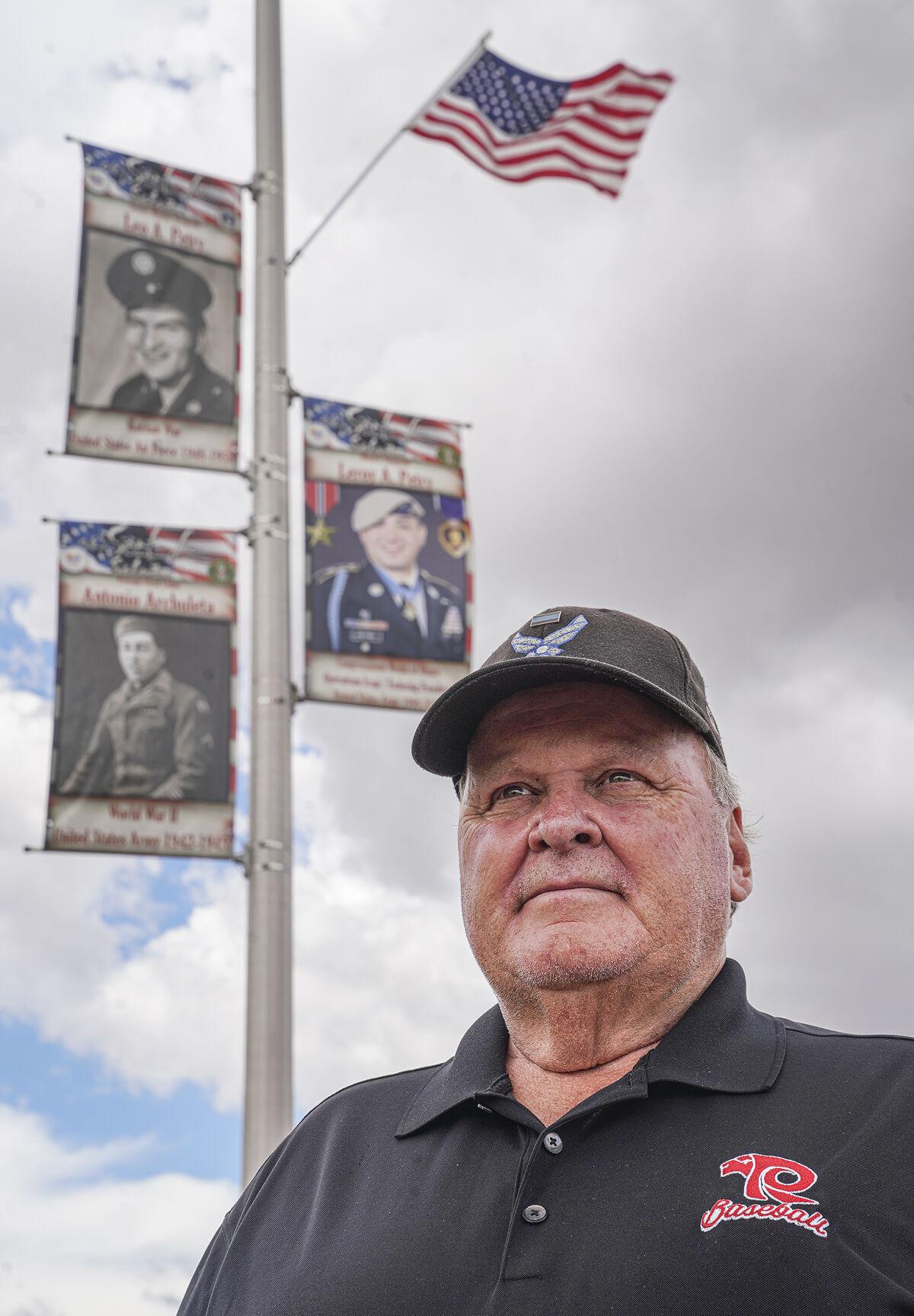 Donald Christy stands beside a light post featuring the banners of three local veterans Thursday afternoon. ‘I know the personal stories behind some of them from talking to the families,’ he said of the Hometown Heroes banners adorning the light poles on Cerrillos Road. 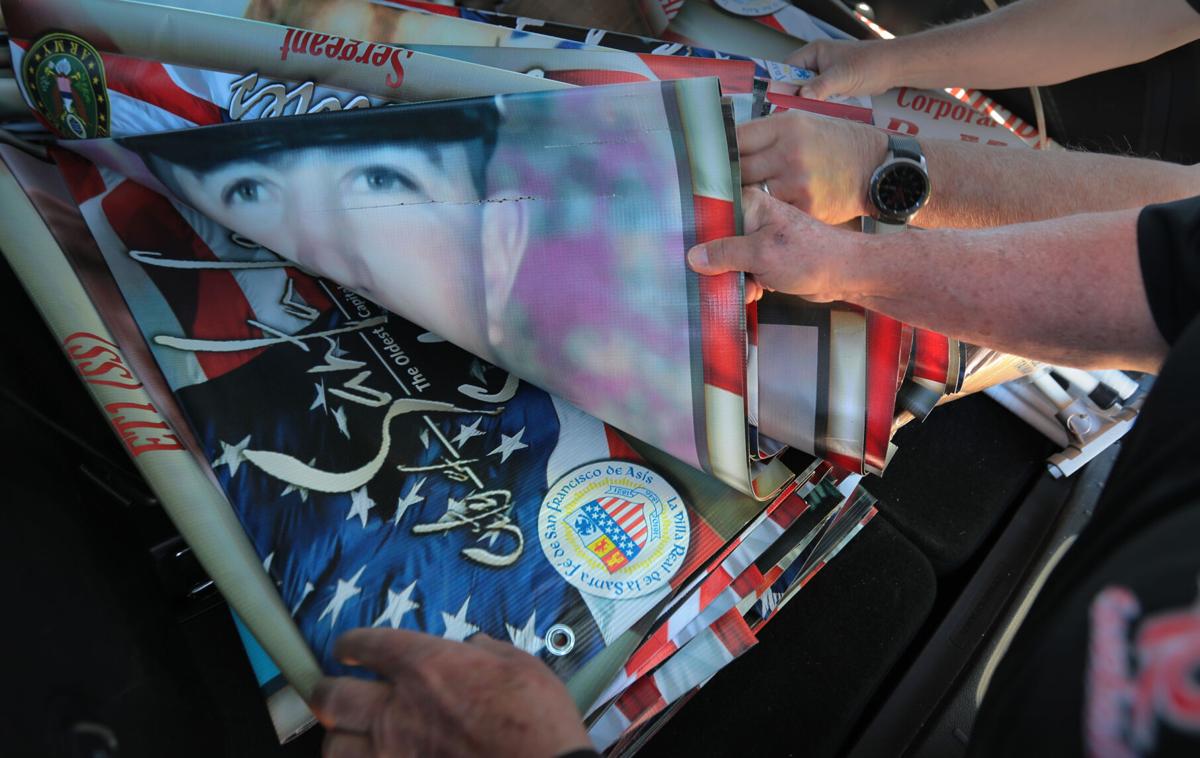 Donald Christy sorts through some of the 200 banners Tuesday that are to be hung on light posts by the city of Santa Fe and the Hometown Heroes project.

Donald Christy stands beside a light post featuring the banners of three local veterans Thursday afternoon. ‘I know the personal stories behind some of them from talking to the families,’ he said of the Hometown Heroes banners adorning the light poles on Cerrillos Road.

Donald Christy sorts through some of the 200 banners Tuesday that are to be hung on light posts by the city of Santa Fe and the Hometown Heroes project.

Each time Donald Christy watches a new banner honoring a military veteran go up on a streetlight pole along a southern stretch of Cerrillos Road, he feels chills.

It makes him proud to be a veteran.

“I know the personal stories behind some of them from talking to the families,” he said of the people honored through the Hometown Heroes banner program.

Christy has spearheaded the effort to honor regional veterans, living and dead, for several years. With the help of the Santa Fe City Council and local veterans groups, the first 20 banners went up in the spring of 2019.

Now, over 200 adorn Cerrillos Road, south of Airport Road, and more than 70 are waiting to go up next year.

But the program is running out of streetlight poles to hold the banners — even after organizers placed up to three banners featuring members of the same family on a shared pole. Christy said he hopes the City Council approves a measure to start placing the banners north of Airport Road.

He envisions a day when all of Cerrillos Road is filled with the banners and wonders if the program could take root downtown, where people strolling through the area can take a moment to look up and learn about a veteran.

Over 100 cities in 11 states have similar Hometown Heroes displays. Christy said Santa Fe is the only city in New Mexico participating in the project.

He pushed for the program in Santa Fe in honor of his father and other relatives who served in the military. A banner honoring his father, Harry Christy, is displayed in his hometown of Piqua, Ohio. Harry Christy, an Army veteran who fought in the Battle of the Bulge during World War II, died quietly June 6 at the age of 99 in his room at an assisted living facility, Donald Christy said.

Six of Christy’s uncles served during World War II, and three of his brothers are veterans — two who served during the Vietnam War and one during Desert Storm.

Donald Christy joined the Air Force in March 1974, signing the enlistment papers before telling his parents. He already had worked for two years at a local Hartzell Industries plant following his graduation from high school.

He didn’t feel pressure from his family to serve, he said. He just had to get out of his small hometown and see the world.

He served as a military police officer, a job that prepared him for a nearly 20-year career with the Santa Fe Police Department. The military taught him life skills, he said — how to work as part of a team and deal with deadlines, discipline and dedication to a task at hand.

“There are certain things you learn in the military that go hand in hand with life,” he said.

He refuses to have his own banner included in the Hometown Heroes display.

“This isn’t about me,” he said. “It’s about those veterans out there.”

Jeff Dieringer, a longtime friend of Christy’s who worked with him in the Santa Fe Police Department, said Christy ran the Pueblo of Pojoaque Boys & Girls Club for several years after he retired from the force. “He’s always been involved in community issues,” Dieringer said. “He’s very civic minded.”

He recalled Christy initiating programs to curb drinking and driving among teens, which earned him a nod as one of the Santa Fe New Mexican‘s 10 Who Made a Difference in 1995.

Christy organized a May 1995 prom for all local high school seniors at what is now the Santa Fe Place mall, which drew some 500 teens.

“We were trying to show teens they could have fun at prom without drugs or alcohol,” Dieringer said.

Retired Santa Fe police officer Gilbert Ulibarri, a U.S. Marine veteran, recalled Christy telling him about his plans to get support for the Hometown Heroes program. Ulibarri wasn’t sure if it would happen, he said, but Christy’s drive for the effort earned the support of city officials and veterans groups.

“If you want something done, Donald is the guy to do it,” Ulibarri said.

Christy was introduced to New Mexico in the 1970s through his military service. His first and last Air Force duty stations were in Roswell and Clovis, and he moved to Santa Fe in the late 1970s after earning an honorable discharge.

He said he hopes Santa Fe’s Hometown Heroes program helps people understand “what sacrifices a veteran makes to serve his or her country.”

“My dad left my mom when she was pregnant to go fight a war, and I’m sure when he left he thought he would never see his wife and unborn baby at the time,” Christy said. “He didn’t see my oldest brother until he came back from the war.

“Even today, there are so many who go off to Afghanistan or Iraq who have no idea if they are coming home or not,” he added. “People who are not veterans or who are not in military families may not understand what they give up to make our country free.”

A great American. But fix the headline. He does not honor only "soldiers" but all service members.

As a US Marine Veteran, I salute my brother, Donald Christy for the honorable and humble service he does for the City of Santa Fe. It is "Men and Women of Valor and Character" that conduct themselves with unselfish motives to get things done in a positive light for others that are not acknowledge by a few. Yet, we, who have served the United State Armed Forces know better. Brotha, Donald, Press On! We got your Six! Gracias por tu apoyo and Semper Fi, ese! Stay well, stand-fast, stand-firm and be in ready-state. Pancho

Thank-you for your brave and meritorious service, Veteran-brother Pancho.

As we celebrate our independence, these are America's true heroes.

Mr. Christy has served his country, his community and his family outstandingly. A powerful example for All Americans.

I urge you to park your car and take a stroll along this stretch of Cerrillos. See banners of those who have served in wars, conflicts, actions, some in same family. See heroes who were MIA, KIA, POW, plus Purple Heart recipients.

Thank you, Donald Christy, for your vision and persistence.

And thanks to Councilor Vigil Coppler for her support of this program.