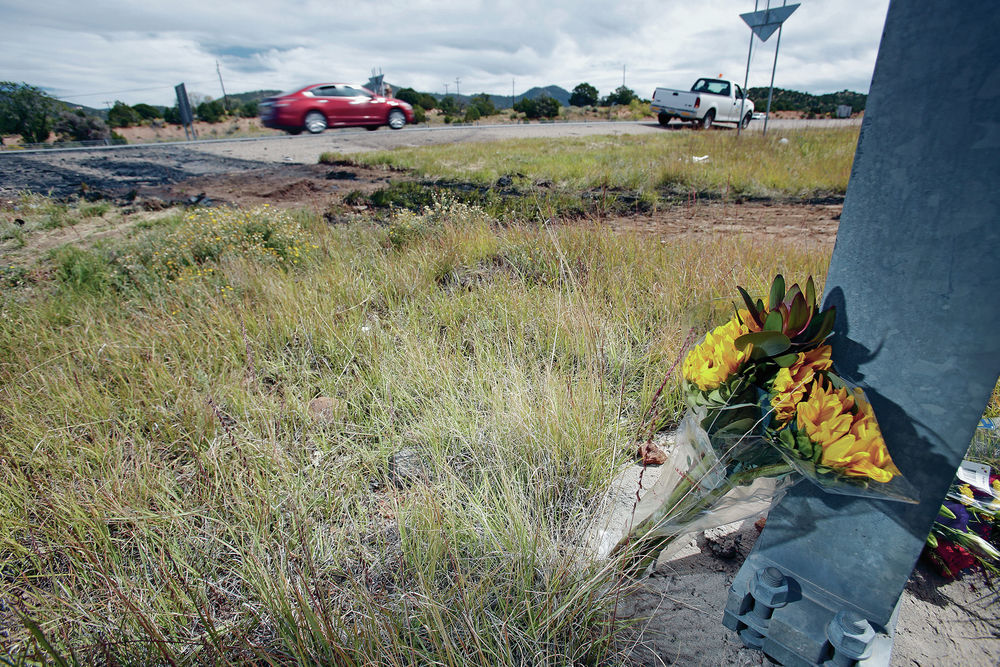 Flowers lean on a post Monday at the site of a crash off Interstate 25. Luis Sánchez Saturno/The New Mexican 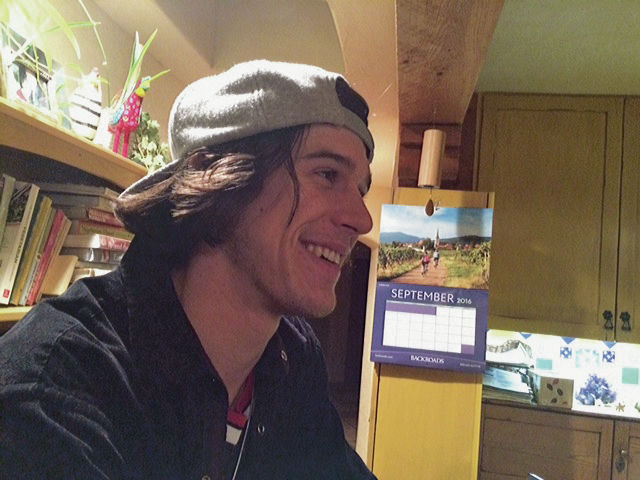 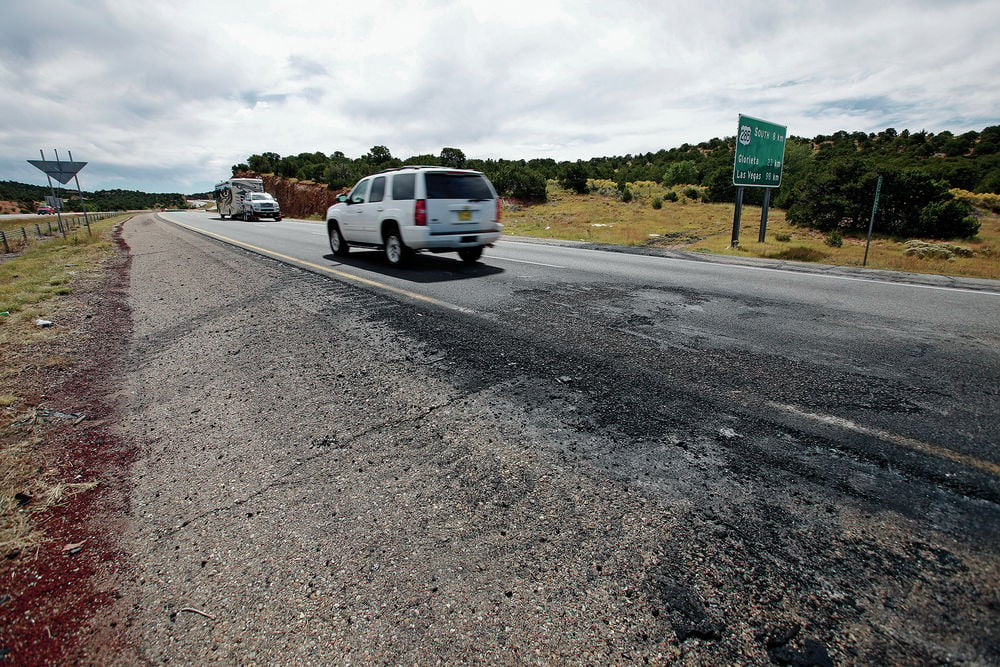 On Monday, scorched pavement marked the site of a two-car crash in the northbound lane of Interstate 25 near the U.S. 285 exit. Luis Sánchez Saturno/The New Mexican 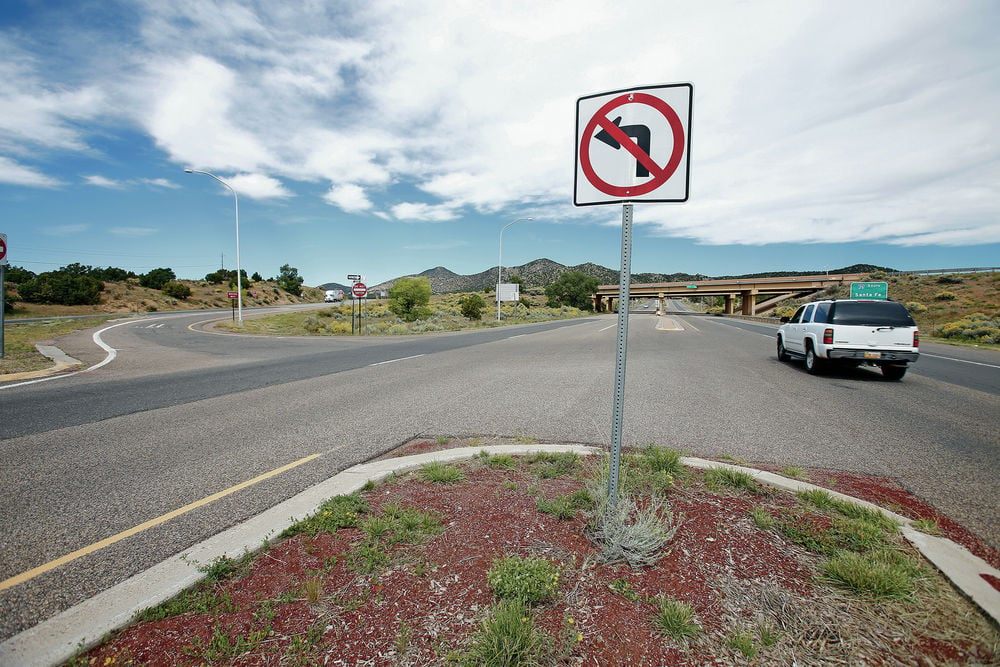 The exit to Eldorado from the northbound lane of Interstate 25. Luis Sánchez Saturno/The New Mexican

Flowers lean on a post Monday at the site of a crash off Interstate 25. Luis Sánchez Saturno/The New Mexican

On Monday, scorched pavement marked the site of a two-car crash in the northbound lane of Interstate 25 near the U.S. 285 exit. Luis Sánchez Saturno/The New Mexican

The exit to Eldorado from the northbound lane of Interstate 25. Luis Sánchez Saturno/The New Mexican

It was a scene of desperation.

One Santa Fe police officer after another risked injury and worse as they tried to free the 23-year-old from his burning car following a two-vehicle collision on Interstate 25 on Saturday night. In the end, they were unable to pull Anton Gress out of his Volkswagen before it exploded into flames.

Santa Fe police reports released Monday paint a picture of police officers, including sheriff’s deputies, repeatedly trying to rescue Gress, who was driving home in the northbound lane near the U.S. 285 exit when a Chevy Tahoe going the wrong way hit him head-on. The Chevy was driven by Clara Avina of Santa Fe, who also died in the crash. Police are investigating whether alcohol played a role in the collision.

The Santa Fe County Sheriff’s Office, the lead investigating agency in the crash, has said that Avina was 44, but an online database says she was 43.

Police say some of Avina’s family members told investigators that she had consumed some alcohol in the hours before the accident. Juan Rios, a sheriff’s office spokesman, said investigators won’t be able to determine if Avina was intoxicated until the state Office of the Medical Investigator concludes a toxicology report.

Friends and former colleagues flooded social media Sunday with remembrances of Gress, who was born in Sacramento, Calif., but grew up in Santa Fe and graduated from Desert Academy. He went on to earn a bachelor’s degree in theater from Chapman University in Orange, Calif., in 2015 and returned to Santa Fe. His father said he wanted to work as a producer in the music and entertainment industry.

“Hands down one of the best people I know. As far as I could tell he didn’t have a single drop of bad blood in his body,” said one friend on Facebook. “This is horrible.”

“I literally cannot process this,” said another on Facebook. “Anton Gress was one of the most positive, joyful spirits I had the pleasure of knowing. I thought for sure that he would change the world.”

Little information was available Monday about Avina. Two phone numbers for her and a possible relative were not in service as of Monday afternoon. A New Mexico State Personnel Office spokesman said she was a records clerk for the office. Online court records showed no criminal history or record of drunken driving.

An 18-page report released by the Santa Fe Police Department says at least eight Santa Fe police officers attempted to save Gress from his burning vehicle, either by trying to pull him out of the Volkswagen or by using a fire extinguisher to put out the flames. One officer was able to enter through the back of the Volkswagen and unbuckle Gress as he pleaded for help but was unable to pull him out because Gress was trapped.

The officers and deputies backed away from the Volkswagen when they heard a couple of “pop” sounds, indicating Gress’ car was about to explode, according to the Santa Fe police report.

Rios said Sunday that Avina’s Chevy was already engulfed in flames before first responders arrived. The impact of the two vehicles knocked Gress’ vehicle back and rolled it over on its roof, Rios said.

Larry Gress, Anton Gress’ father, said in a phone interview that his son had gotten out of work as a bartender at Ten Thousand Waves, a Japanese-style spa, when he began driving to his home Saturday night. The son lived with his father in Los Caballos near Eldorado, the father said.

“He was a beautiful human being. He brought a lot of joy to people,” the father said.

“His passing made me think of Maya Angelou’s quote, ‘At the end of the day people won’t remember what you said or did, they will remember how you made them feel.’ And that’s how Anton will be remembered — how he made us feel.”

Larry Gress said his son had also worked for the Santa Fe-based company Beachtig CTC, a management and executive coaching agency, as a marketing and sales assistant since May, according to the company’s website and the father.

Larry Gress said his son had wanted to work on the production side of the entertainment industry. He said one of his son’s most recent jobs was as a producer at a music festival in Mora. He said his son also played his original music in different venues in Santa Fe and Albuquerque.

A University of New Mexico chart with state Department of Transportation data shows there have been 263 fatal car crashes in the state this year through August, at least 98 involving alcohol.

Of those 263, 13 fatal crashes took place in Santa Fe County, but that chart doesn’t say how many of those involved alcohol.

On Monday afternoon, two Transportation Department employees were at the site of Saturday night’s crash, which happened near exit 285, analyzing the burn areas on the northbound shoulder and on the lane. Various car parts were still on the lane’s shoulder, and someone had left a dozen sunflowers and a dozen roses as a memorial.

In 2007, the state Transportation Department redesigned the interchange at U.S. 285 and Interstate 25 after a fatal car accident raised questions about the intersection’s design. In that accident, Dana Papst, who was driving south in the northbound lane of the interstate, collided with a Las Vegas, N.M., family of six in November 2006. Papst killed five in the family’s minivan and himself near Eldorado.

The New Mexican reporter Robert Nott contributed to this report.