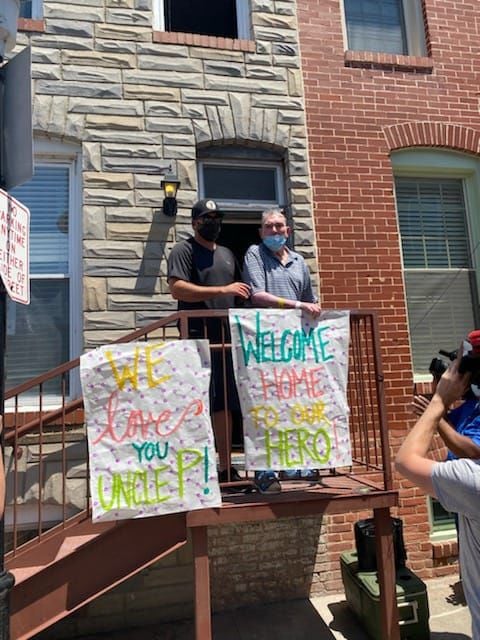 Pierre Gibbons is cheered by a crowd that gathered to welcome him home following an extended hospital stay. Gibbons, a Santa Fe High graduate, had tried to rescue an elderly woman from a burning building in September and suffered severe burns to 70 percent of his body. 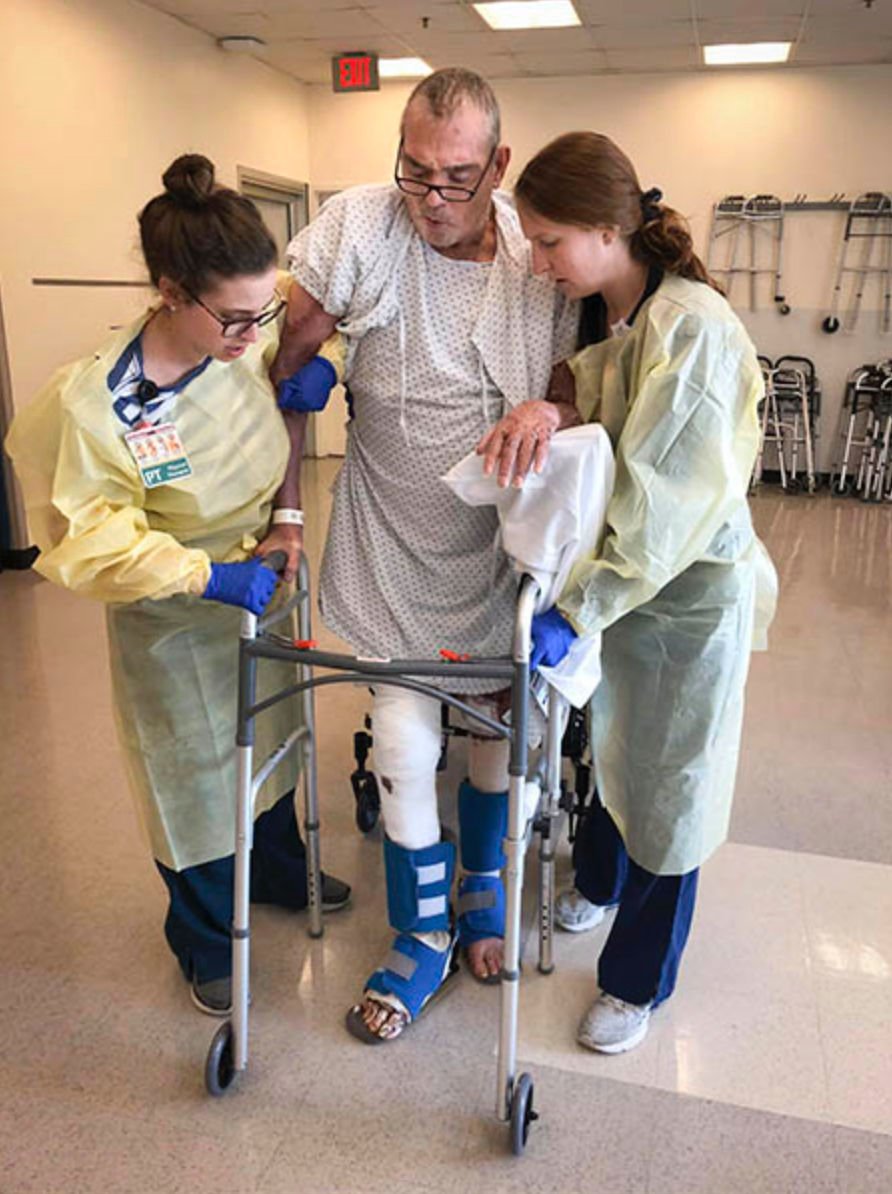 After spending six weeks in a coma and six months in intensive care, Pierre Gibbons underwent three months of physical therapy at Johns Hopkins Bayview Hospital before being released. 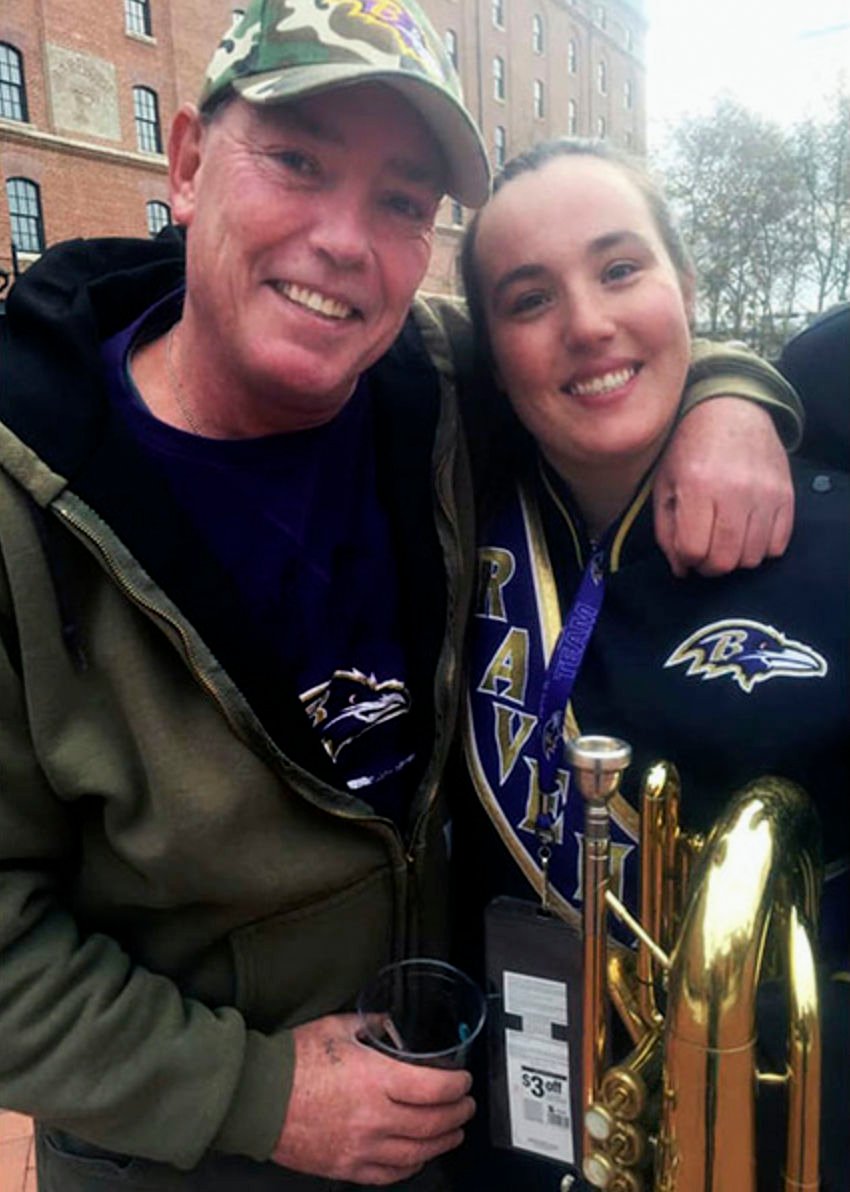 Pierre Gibbons with his daughter, Taylor, in an undated photo.

Pierre Gibbons is cheered by a crowd that gathered to welcome him home following an extended hospital stay. Gibbons, a Santa Fe High graduate, had tried to rescue an elderly woman from a burning building in September and suffered severe burns to 70 percent of his body.

After spending six weeks in a coma and six months in intensive care, Pierre Gibbons underwent three months of physical therapy at Johns Hopkins Bayview Hospital before being released.

Pierre Gibbons with his daughter, Taylor, in an undated photo.

He reserves that word for the firefighters and first responders who lined the street to his house in Patterson Park, a suburb of Baltimore, one week ago. It was the first time Gibbons returned home since Sept. 22 — nine months since he was dubbed a “hero” for running into a burning home to save 77-year-old Mary Sterling, who was trapped in her basement.

Gibbons, a Santa Fe High graduate who played on the school’s 1979 state championship football team, almost rescued Sterling, carrying her within feet of the front door before an explosion trapped them under burning rubble.

Firefighters pulled them out, but Gibbons suffered burns on 80 percent of his body. Sterling survived the fire but died several weeks later.

After six weeks in a coma, six months in the intensive care wing of Johns Hopkins Bayview Hospital and another three in physical therapy, Gibbons, 57, was finally released and sent home. With his son, Jeremiah Gibbons, driving him and broadcasting his arrival on Facebook Live, Pierre Gibbons was greeted by dozens of neighbors, journalists and first responders cheering him.

A sign that read, “Welcome Home Hero,” stretched across the street.

It was hard for the elder Gibbons not to get emotional in the moment.

“It was overwhelming and kind of unexpected,” he said in a phone interview Friday. “I expected a few family members here and maybe a couple of my friends from the neighborhood — not the welcome I received.

“They must have had five or six fire apparatus that you couldn’t see [in the video] that were parked there next door. And all the crews that manned them were here giving me honor. I was like, ‘No, you’re the ones that deserve the respect and honor.’ It’s them that are out there every day doing the work.”

Pierre Gibbons may tend to understate his part in trying to save a person’s life, but what can’t be ignored is his journey that brought him to the precipice of death’s door and back.

He said he suffered two strokes while in a coma, and they left his left arm paralyzed. He uses a wheelchair for the most part, and he continues physical and occupational therapy. Doctors grafted synthetic skin on his arms, which he said feels no different from his regular skin.

While Pierre Gibbons was in the hospital, friends and neighbors pitched in to add a bedroom, an Americans with Disabilities Act-compliant bathroom and a deck to the first floor of his brownstone house to help him get around.

Jeremiah Gibbons said a GoFundMe page that raised more than $50,000 helped pay for the bulk of the additions, which were finished just hours before his dad returned.

“The crews have worked tirelessly on it,” Jeremiah Gibbons said.

An in-house nurse assists him 12 hours a day, while Dave Gibbons, Pierre Gibbons’ father, watches over him the rest of the time.

The nurse “makes sure I wake up and feeds me my lunch and makes sure I can shower and go to the bathroom,” Pierre Gibbons said. “All the things people don’t realize are simple things in life are complicated for me on that front.”

But Pierre Gibbons is still alive, and his friends are thankful for that. Jeff Apodaca, who was a football teammate of Pierre Gibbons at Santa Fe High, said hearing his friend’s voice was one of the best feelings he’s had in a while.

“It’s been great to hear from him,” Apodaca said. “He was just thanking a lot of people for their support. I’m sure he’s pretty overwhelmed right now.”

Pierre Gibbons said he appreciated the outpouring of support he received from community members, former classmates and friends. He was supposed to be part of the festivities as Santa Fe High prepared to celebrate the 40th anniversary of its championship team, which occurred the week of the fire.

Instead, he later saw the video taken of the crowd at a darkened Ivan Head Stadium as people in the stands turned on their cellphones to honor him.

“That just gave me goosebumps,” said Pierre Gibbons, who was in a coma the night of the game. “It was pretty cool.”

Despite his struggles, he has not lost his spirit. His goal is to walk on his own again by the time his 58th birthday rolls around in September. It won’t be easy: Doctors told him it could take five or six years before he is done with rehabilitation.

Then again, he said they told him he would be in the hospital for a year, and he beat that timeline by three months.

Pierre Gibbons, who was the senior facilities manager at Good Samaritan Hospital in Baltimore, doesn’t count out working again, noting, “I got plenty of people who want me to go work for them.” He even mused about the possibility of helping fellow burn victims and perhaps carving out a niche as a motivational speaker.

Jeremiah Gibbons said there will be more challenges ahead for his dad and the family, but he cautioned against betting against him.

“This is a new phase of the unknown, and a new phase of him having to be partially responsible for rehabilitating with the push of such skilled hospital staff,” Jeremiah Gibbons said. “But I don’t doubt him at all.”

The fire also led to other life-altering decisions. Pierre Gibbons said he was a heavy drinker and smoker — he had been doing just that when he ran into the building — but doctors told him his body can no longer handle it.

“My lungs took a major beating in the fire, and my liver and everything else does not need alcohol,” Pierre Gibbons said. “It’s a big change for me. I live alone and I’m single. That was a part of my life, partying, and that’s not me anymore.”

The new Pierre Gibbons sounds like a survivor. In many ways, there’s nothing more heroic than that.