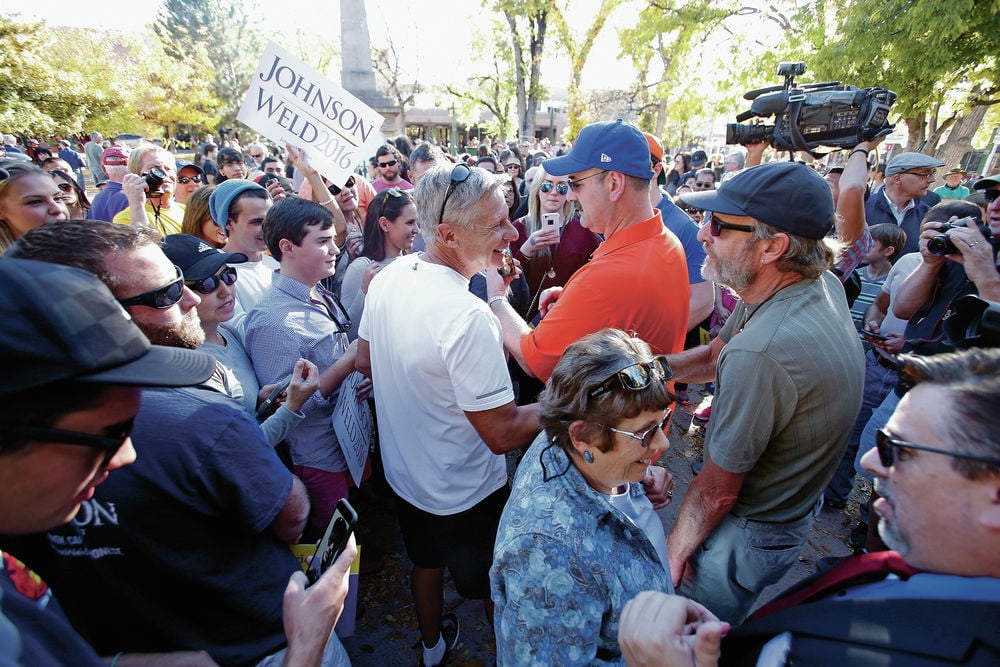 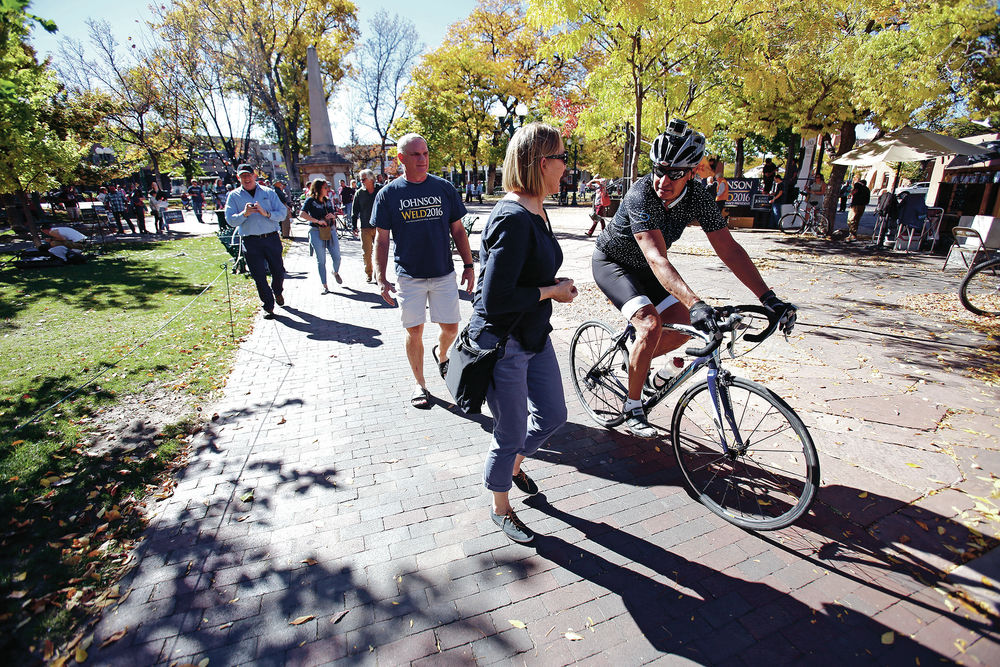 Liz Martin of San Diego, Calif., speaks with presidential candidate Gary Johnson on Saturday after he arrived on the Plaza from a 70-mile bike ride before a political rally. Luis Sánchez Saturno/ The New Mexican 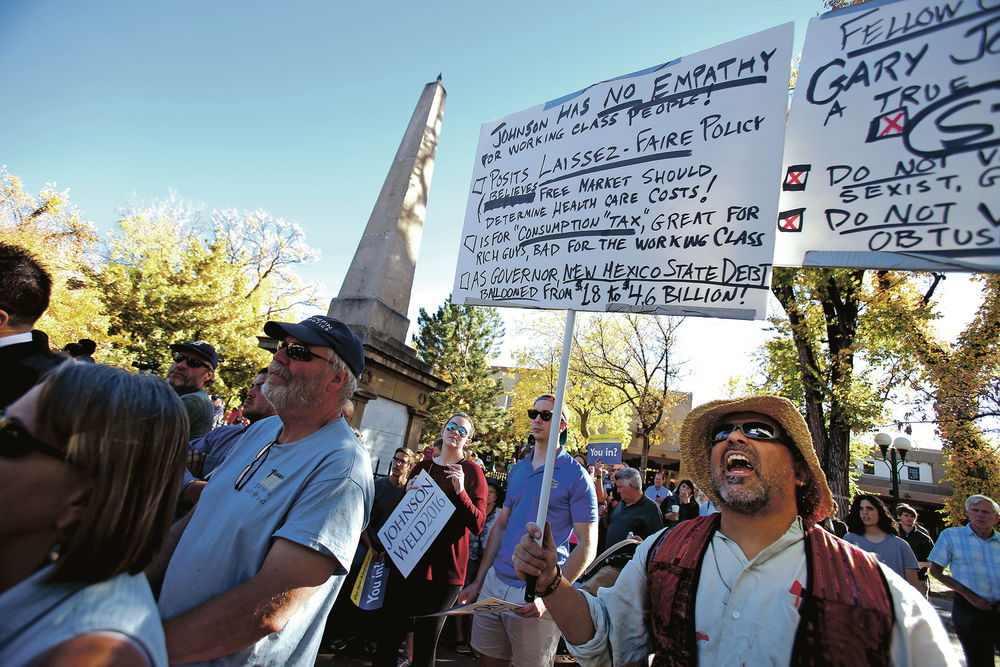 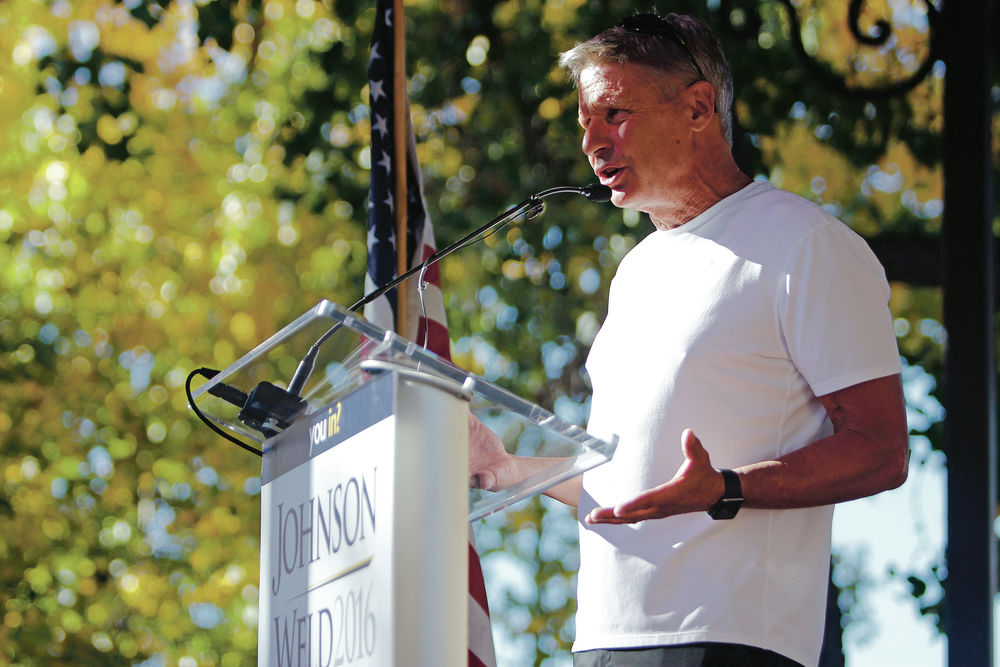 Liz Martin of San Diego, Calif., speaks with presidential candidate Gary Johnson on Saturday after he arrived on the Plaza from a 70-mile bike ride before a political rally. Luis Sánchez Saturno/ The New Mexican

Men’s Health magazine recently said he may be the fittest presidential candidate in recent history. On Saturday, Libertarian hopeful Gary Johnson, perhaps proving that notion, rode his bicycle from Taos to Santa Fe for a rally.

Johnson — a former two-term Republican governor of New Mexico who has been a triathlete, competitive skier, mountain climber and marathoner — completed the 70-mile bike trek in six hours with his fiancée, Kate Prusack, starting at 8:30 a.m. and arriving on the Santa Fe Plaza around 2:30 p.m.

A group of journalists from Germany recorded every move as Johnson made a brief initial appearance, surrounded by an entourage of bicycle riders and dozens of supporters seeking selfies with him.

“Not one president or first lady can ride that in six hours,” Johnson said from the Plaza bandstand a little while later, after taking a quick break to shower and change out of his spandex shorts and polka-dot cycling jersey. Freshly attired in black shorts and a T-shirt, the candidate addressed a couple of hundred excited supporters, local media, the foreign reporters and a few protesters.

Johnson told the crowd that if he wins New Mexico, it will send a message that voters are tired of the nation’s two-party political system.

He dismissed Republican presidential candidate Donald Trump as a person who doesn’t know what he is talking about.

“That guy has no compass whatsoever,” Johnson told the cheering crowd.

He also dismissed some embarrassing moments he’s faced on the campaign trail.

Last month, just as Johnson’s campaign was gaining momentum, he appeared on a cable TV news show, where an interviewer asked him what he would do about the situation in Aleppo, the Syrian city at the center of the nation’s civil war and refugee crisis, which has been bombed by Russian forces.

“What is Aleppo?” Johnson asked, triggering ridicule on social media.

Explaining his foreign policy Saturday, Johnson mentioned Aleppo, prompting some laughter in the crowd. He said he wants to avoid putting the American military in “unwinnable” situations.

“Just because Hillary Clinton can dot the I’s and cross the T’s on the names of foreign leaders and geographical locations, this makes her qualified to put our military in such a situation?” he asked rhetorically, referring to his Democratic opponent in the presidential race.

The Trump and Clinton campaigns both see Johnson as a thorn in their sides because he could peel away a number of young voters from the two major political parties, tilting the election either way.

Jack Cliver, 25, of Santa Fe, who attended Saturday’s rally, said he was a supporter of Bernie Sanders before Sanders lost the Democratic nomination to Clinton. He’s trying to decide whether he will vote for Clinton.

“Those Libertarians, man, I just can’t trust them,” Cliver said. “They just put too much trust in the free market.”

Still, he is considering voting for Johnson as a protest vote.

Michelle Chavez Tapia and her husband came out to support Johnson on Saturday because they believe he was a good governor for the state.

Anthony Tapia said he is a registered Republican but supports same-sex marriage, legalizing marijuana and having the U.S. interfere less in other countries — all issues that Johnson supports.

Chavez Tapia said she doesn’t trust either Trump or Clinton to lead the nation. She said her vote for Johnson is not a protest vote but because she believes he is a good third option. Many of her friends say they are voting for Clinton to avoid a Trump presidency, she said, even though they may not agree with Clinton’s policies.

“Nothing is going to change if people don’t vote for who they believe in,” she said.

Johnson has touted a mix of socially liberal and conservative views.

Since the later 1990s, he has advocated for legalization of the recreational use of marijuana. He also supports same-sex marriage, abortion rights and immigrants’ rights.

On the conservative side, he has said that if he were elected president, he would raise the eligibility age for Social Security benefits, eliminate the federal departments of Commerce, Education, Homeland Security and Housing and Urban Development, and implement a flat tax.