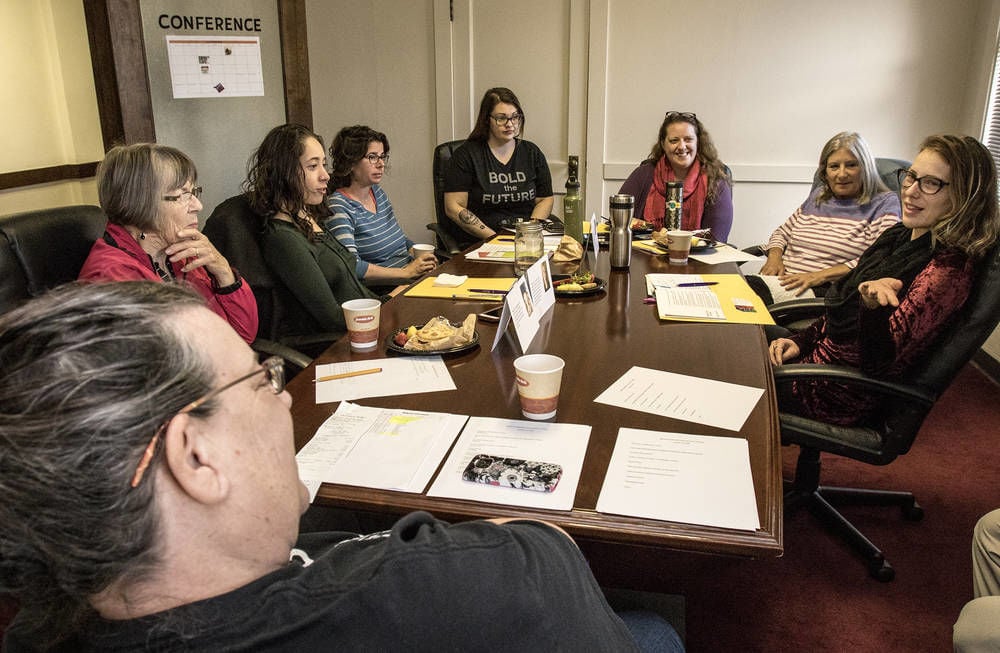 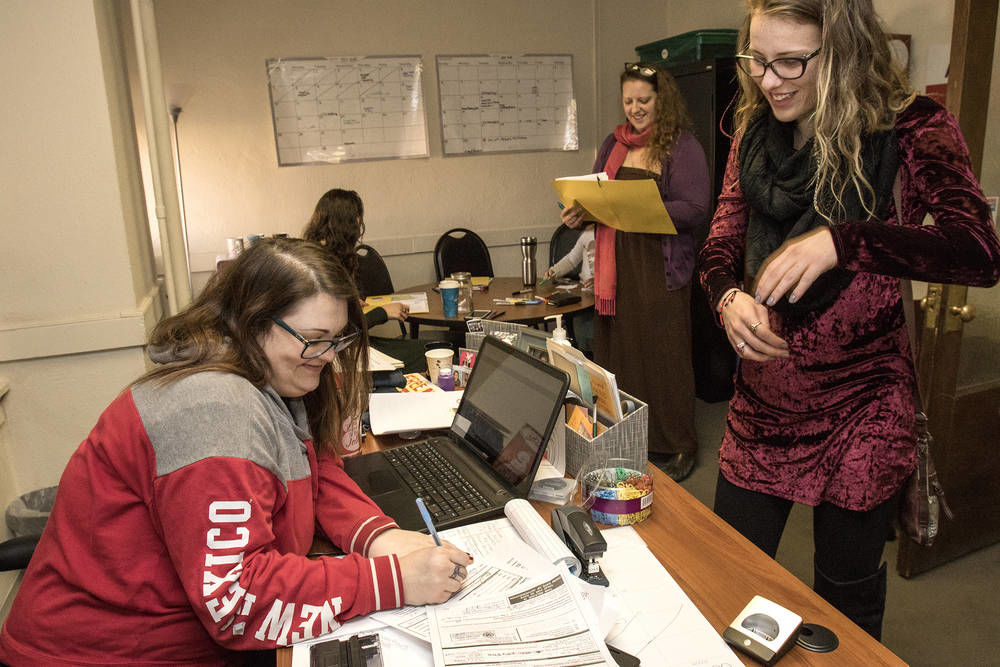 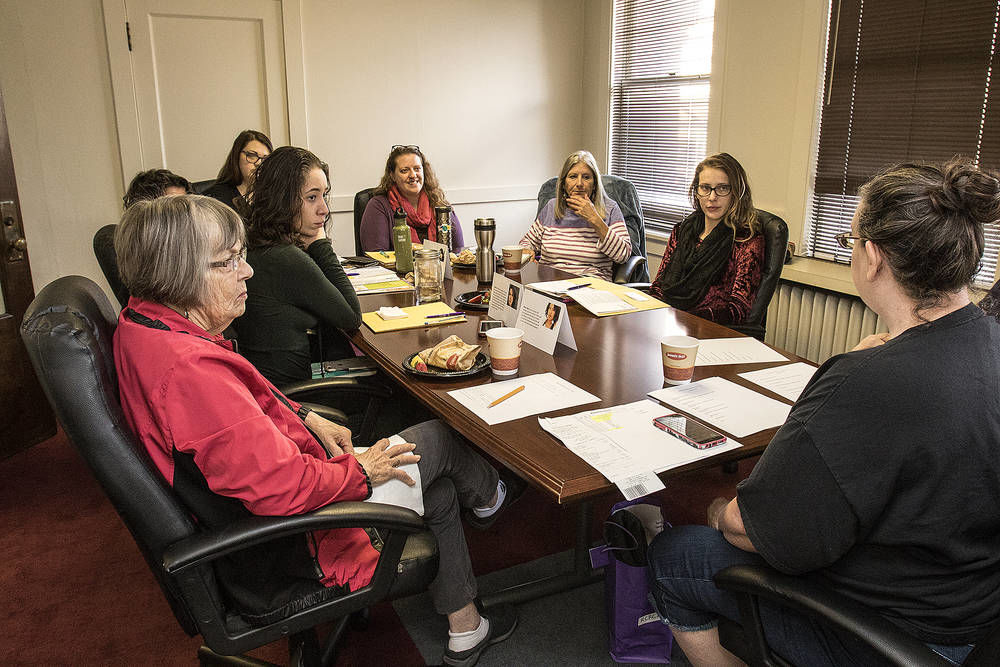 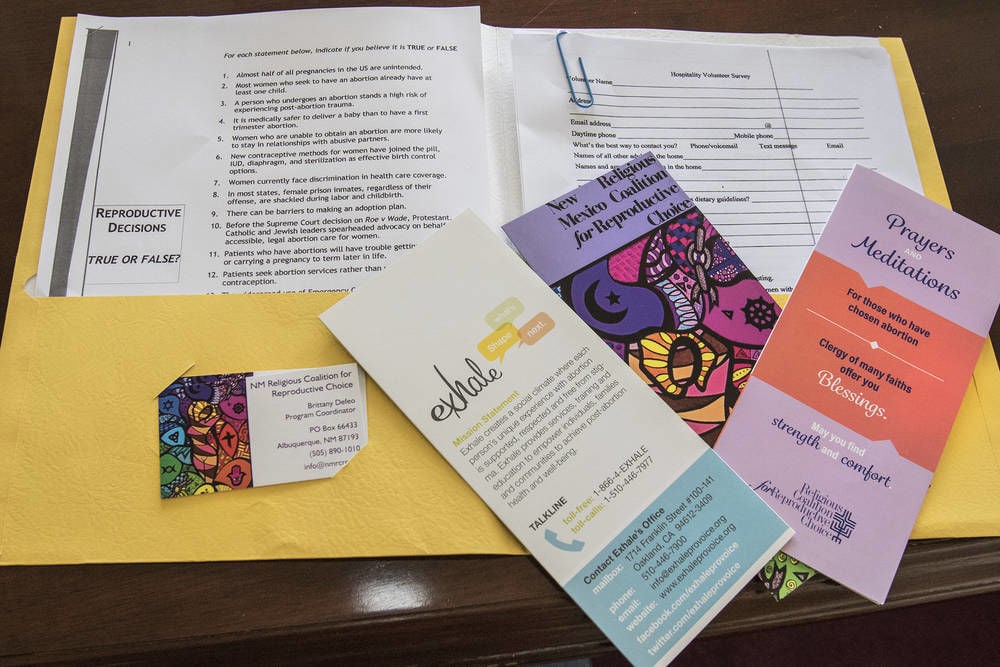 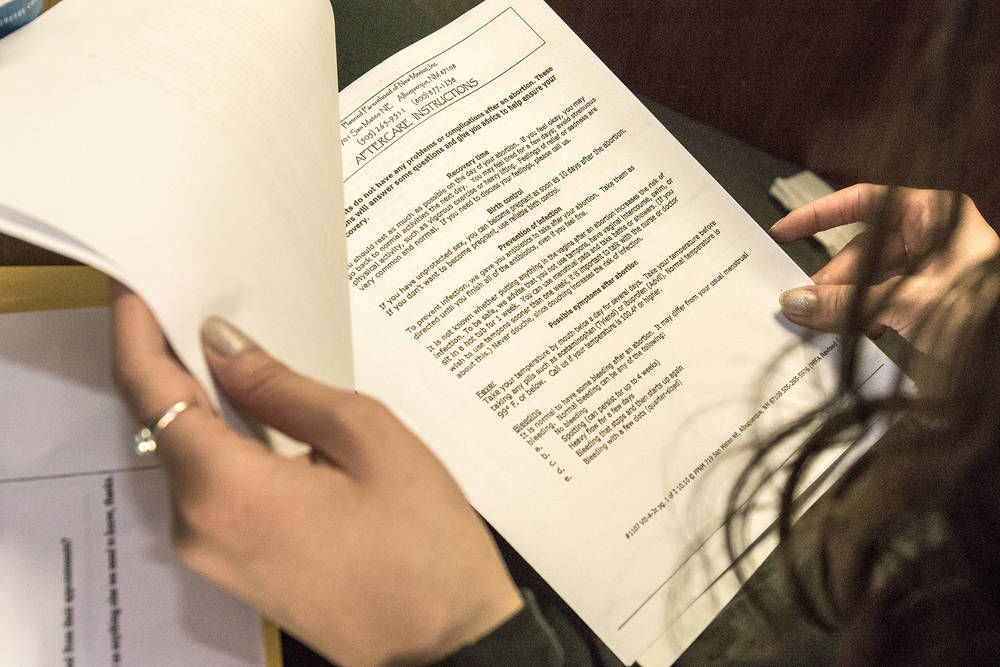 She arrived under cover of darkness, alone, a stranger in an unfamiliar city.

In July 2014, El Paso resident Kasey Sanchez was 27 years old — and 27 weeks pregnant. In the seven weeks since she’d learned she was expecting, Sanchez had told no one, except a few muted voices on the phone — voices of people who promised to help.

The nearly two-month stretch, she said, had been an agonizing whirlwind of hushed planning, isolation, guilt, shame and shock. But the moment Sanchez stepped off the Greyhound bus in Albuquerque, relief swept over her. She knew she wasn’t alone anymore.

Like thousands of women before her, Sanchez had come to New Mexico to have an abortion. And as they had so many times for so many of those women, volunteers for the New Mexico Religious Coalition for Reproductive Choice were waiting at the bus station.

The coalition, a state chapter of a national interfaith nonprofit and one of about 70 so-called abortion funds throughout the United States, provides out-of-state women with home stays, meals, clinic rides — and comfort — during an oft-trying experience.

“Caring for the traveler and comforting the stranger, that’s a traditional value across religions, across faith communities,” said Joan Lamunyon Sanford, the group’s executive director. “If we can do that, then [women] … are in a better mindset. They have healthier outcomes.”

The group’s work, especially its frequent support of women seeking controversial late-term abortions, has inspired anger and confusion among some of New Mexico’s anti-abortion activists.

As abortion rights advocates worry political shifts may jeopardize those rights, staffers and volunteers for the religious coalition say their work is that much more critical.

One-third of the 1,193 state abortion restrictions passed since the U.S. Supreme Court ruled on Roe v. Wade in 1973 were enacted between 2011 and 2017, according to the Guttmacher Institute, a reproductive rights research and policy group.

In that same time period, New Mexico enacted zero major limitations. It remains, to the pride or ire of advocates on opposite sides of the abortion aisle, one of the least restrictive states in the nation.

As bordering states — Texas in particular — have reined in access, women have turned to New Mexico.

In 2010, out-of-state women procured 6 percent of the 4,779 abortions performed here, according to data from the New Mexico Department of Health. By 2016, that number had jumped to 26 percent of 4,573 abortions.

The religious coalition provided services to 102 women from all corners of the United States in 2017. Two more came from Canada, one from Mexico. Lamunyon Sanford said countless other women called the group’s offices but never made it.

“The obstacles are just too much,” she said.

New Mexico is home to one resource those states don’t have: Dr. Curtis Boyd. In the 46 years since he opened his first abortion clinic in New Mexico, Boyd has seen his Albuquerque facility, Southwestern Women’s Options, burned; his life threatened; and his good friend, Kansas late-term abortion specialist Dr. George Tiller, assassinated.

According to the handful of interviews he’s given for newspaper articles, Boyd started performing abortions in Texas before they were legal. After Tiller’s death in 2009, Boyd decided to fill the service void and began offering late-term abortions in Albuquerque.

Today, Boyd is one of only a handful of doctors nationwide — three, by Lamunyon Sanford’s count — performing the controversial procedure.

Through a spokeswoman, Boyd and his wife, Glenna Halvorson-Boyd, declined to be interviewed for this story. Instead, they issued a statement in support for the religious coalition.

Late-term abortion is often, though not always, accepted to mean abortions performed after about 24 weeks, when the fetus is able to survive outside the womb. The procedure is rare — accounting for less than 1.3 percent of all abortions, according to the Centers for Disease Control and Prevention. In many cases, it’s performed to protect the mother’s life or because of fetal abnormality.

On any given day, and especially on days when abortions are performed, protesters gather outside Boyd’s clinic. For years, Albuquerque missionaries Bud and Tara Shaver led the protests.

The Shavers have made campaigning against abortion their life’s work. Albuquerque, they often say, is “the late-term abortion capital of the world.”

“They support the killing of babies, and they’re helping women to kill their babies,” she said. “Being religious doesn’t buffer that at all.”

Lamunyon Sanford said she believes decreased access nationwide is driving the steep increase in callers to the coalition over the past decade. The number of women served has spiked, she said, from 10 in 2008 to 103 so far this year.

Five years ago, Lamunyon Sanford moved the coalition’s headquarters from her home to a two-room office space in downtown Albuquerque.

On the second Saturday in October, nine women and two men crowded into a nearby conference room. Lamunyon Sanford has welcomed a steady stream of new volunteers every few months. Interest kicked up, she said, after President Donald Trump’s election, and then again after the appointment of Brett Kavanaugh to the U.S. Supreme Court.

In the conference room, Lamunyon Sanford and her team of a few seasoned volunteers tried to convey what new recruits should expect when they welcome women into their homes or meet elsewhere.

“The people that need our help are people with pretty complicated lives,” Lamunyon Sanford said. “If they had sick leave from work and a credit card and health insurance, then they wouldn’t be calling us.

“You don’t have to make them feel better or fix it,” she added. “Just listen.”

By the time they arrive in New Mexico, the religious coalition’s patients are likely to have worked with more than one abortion fund. That’s the name given to nonprofit groups that help fund low-income women’s abortions and related support services — travel, child care, housing, etc. One group may pay for the abortion itself, another for travel.

For most low-income women, it takes weeks to work through the funding hodgepodge.

In 2013, Texas’ Republican governor, Rick Perry, signed into law a package of some of the toughest abortion restrictions in the nation. The measure, House Bill 2, banned abortions after 20 weeks — and required that doctors maintain admitting privileges at a hospital. More than half of the state’s 40 abortion clinics shuttered, putting women like El Paso resident Sanchez on the hunt for out-of-state options.

When Sanchez was 22, her mother died of breast cancer, an event that she said triggered a “really bad spiral.” She started using drugs, she said, and fell into an abusive relationship with the man who would have been the baby’s father. Police were called multiple times over domestic violence disputes.

When she found out she was pregnant, Sanchez was still taking drugs. She and her boyfriend had split, and she was sleeping at a friend’s house.

“I knew I wasn’t going to have any means to raise a child in the right environment,” she said. “I just felt like I was contributing to the problem if I said, ‘Well, let’s just see how it goes and hope for the best.’ I had such a great childhood, and I wanted it to be the same [for my child]. I didn’t want it to be under those circumstances.”

An El Paso clinic referred Sanchez to Southwestern Women’s Options and recommended the religious coalition for help with housing and transportation. Then Sanchez had to figure out how to pay for the roughly $2,800 procedure.

She scoured the internet for resources and found partial funding through the National Abortion Federation Hotline. In the seven weeks it took for funding to come through, Sanchez’s 27-week pregnancy had crossed over that oft-legislated 24-week threshold.

For Sanchez, the abortion proved a turning point. Soon after the procedure, she got a job. She said she’s been supporting herself financially since.

Last month, Sanchez started working at a hospital in El Paso — fulfilling a goal she set for herself two years ago. She works there full time while taking college courses online. She said she’s busy and proud of the way she’s turned things around.

“I told myself I cannot ever let something like this happen to me again,” Sanchez said. “… I want to make better choices, so that way I have good consequences, not bad consequences.”

Sanchez expects to graduate in May with a degree in health and human services (she hopes to become a social worker). She will be joined at the ceremony by Sandra Penn, the religious coalition volunteer who was her host in Albuquerque.

“She has been just the most amazing person to me in my lifetime,” Sanchez said. “I really value her friendship, and I really love her so much. I think she’s been a great mom figure for me.”

At the training, Penn, who said she’s housed somewhere between six and 10 women, described her work with the religious coalition as “one of the most important things I’ve done.”

Like Sanchez, most of the women come alone, carrying some combination of anxiety and relief, Penn said. Some seek counsel from volunteers or the small team of clergy the group keeps on call. But for most, knowing they’re supported in their decision is enough.

“I know that in some circles [New Mexico is] considered the worst place in hell for Americans, or something like that,” Penn said. “… But we’ve got to be damn proud that this is a place that women can look to, and where women feel safe.”

10: Number of women served by New Mexico Religious Coalition for Reproductive Rights in 2008