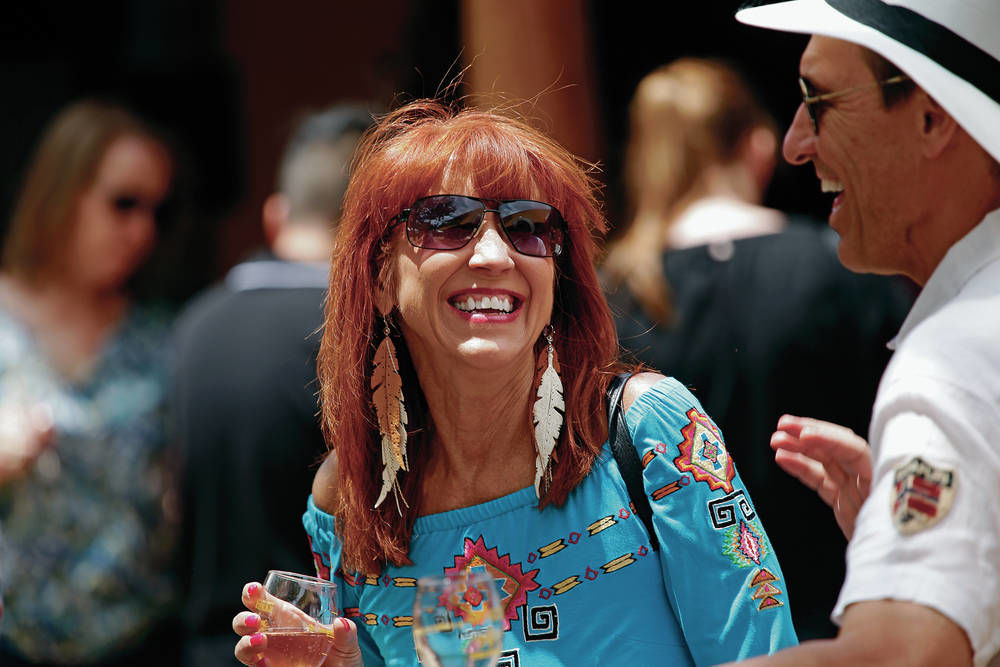 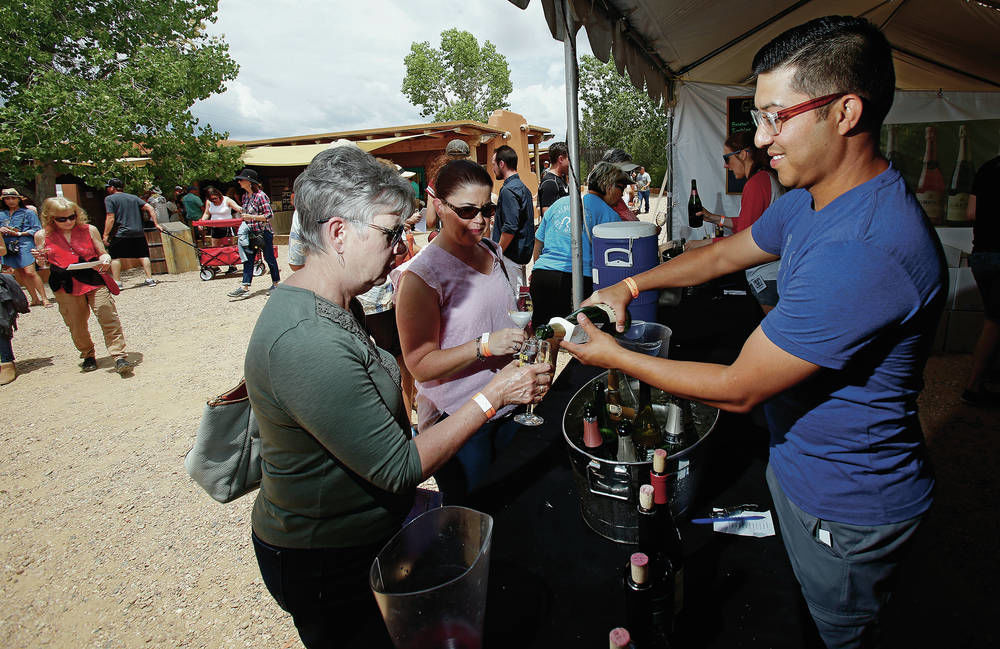 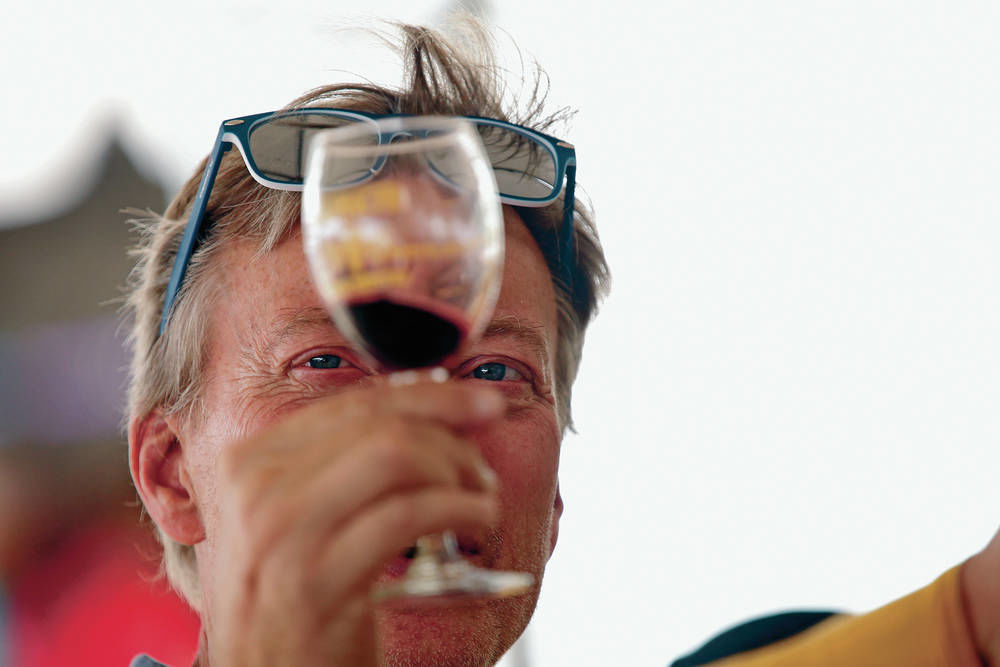 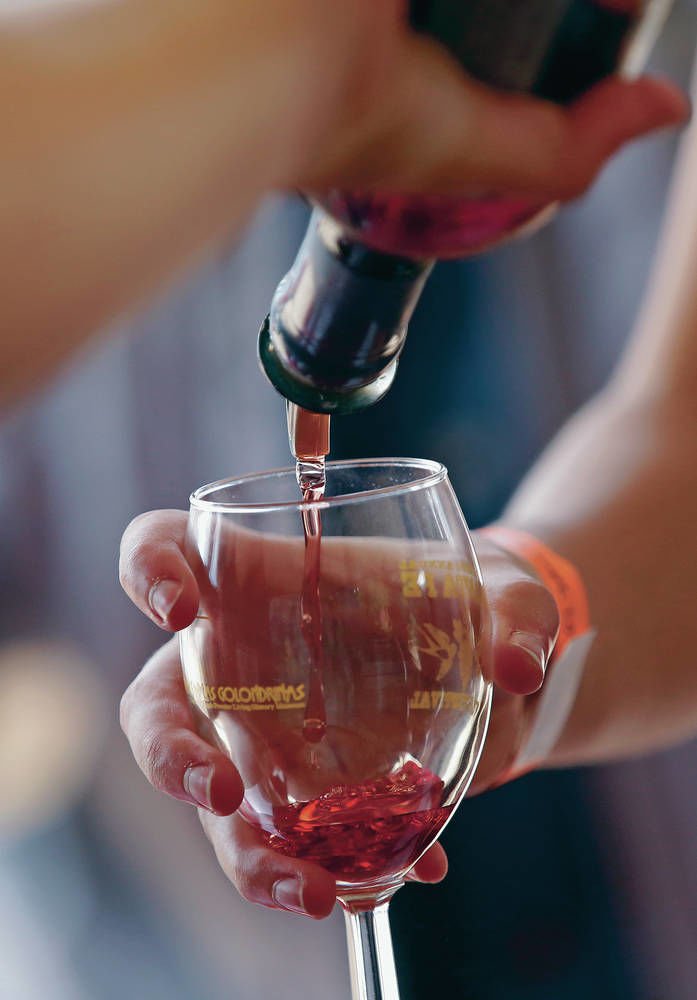 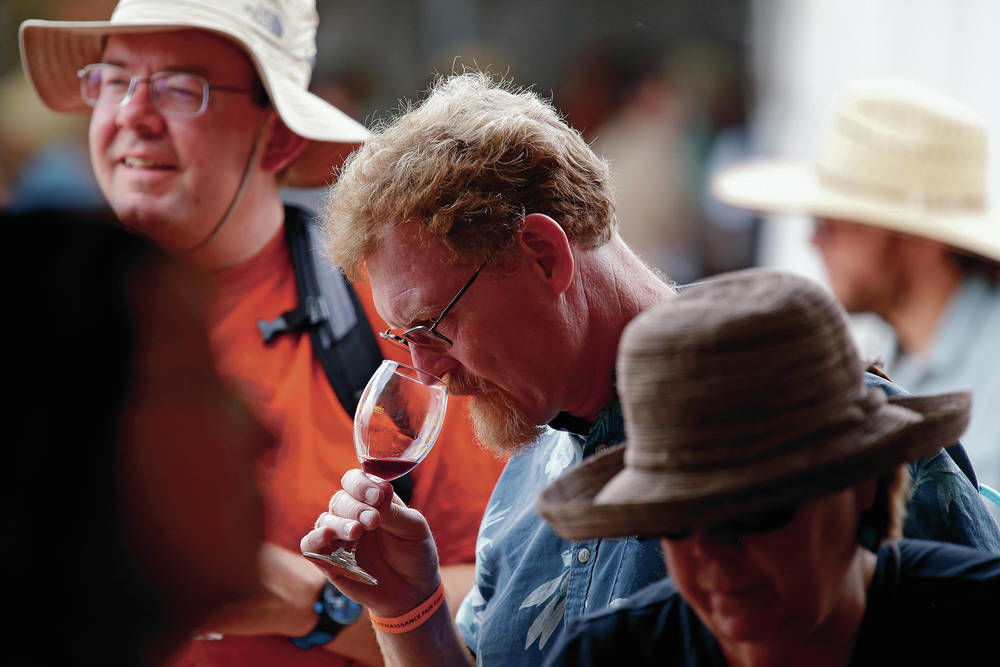 Some of the factors that go into producing a good wine also describe New Mexico’s wine industry more broadly.

Over the past decade or so, a handful of new wineries have sprouted across the state for a total of 55, according to Christopher Goblet, executive director of the New Mexico Wine and Grape Growers Association.

“This isn’t an industry that moves at the speed of beer,” Goblet said. “It’s steadily growing, and we’ve got new players coming in all the time. But we’ve also got families retiring and passing it on to their kids.”

Paolo D’Andrea, owner of Luna Rossa Winery in Deming, may do just that. He and his 23-year-old son, Marco, were running the tasting tent Saturday at the 26th annual Santa Fe Wine Festival.

“Eventually, he’s going to take over,” said D’Andrea, with the hopeful smile of a father, between a steady stream of wine sample pours for eager customers. D’Andrea already had sent his son to Italy to learn to be a winemaker; Marco is now studying for an agricultural business degree.

The elder D’Andrea, who said he comes from four generations of Italian winemakers in northeast Italy, moved to New Mexico more than 30 years ago to teach Mexican laborers to prune vines in the vineyards and decided to put down roots of his own.

“When I moved here in ’86, the vineyards in the Deming area, they looked like a disaster,” he said. “First, I wanted to prove myself.”

D’Andrea said he wanted to show he could grow his own vineyard. Along the way, he married and had four children.

By 2000, D’Andrea had opened Luna Rossa. The vineyard and winery now has an Italian restaurant and tasting room in Las Cruces.

Luna Rossa was one of nearly two dozen wineries throughout the state featured at the wine festival, held each year at El Rancho de las Golondrinas, a historic ranch and museum south of Santa Fe that seeks to educate visitors about New Mexican culture and heritage. The two-day event continues Sunday.

“I think the Santa Fe festival is a great event for us in a market that we feel we need to continue to grow,” Goblet said. “We would love for more restaurants and bar managers to come out to Santa Fe Wine Fest and taste the latest vintages.”

For all its wine history — Franciscan monks in New Mexico are said to have planted the first grape vines in the nation in 1629 — the state is still a fledgling in the industry when it comes to reputation. At least partly due to the state’s high-desert soils, New Mexico wines have a tendency to be on the sweeter side, some bracingly so, which can put off wine aficionados.

“I’m hoping that we figure it out,” said Jon Paul Leos, wine director and sommelier at La Casa Sena Wine Shop in downtown Santa Fe. “A lot of my clients who come in here, they’re not looking for sweet wine.”

Leos carries a few New Mexico wines but admitted that “the good wines that we have in New Mexico are a little expensive.” He noted that while New Mexico winemakers were experimenting with many different varieties, progress in making truly great wines was slow.

One promising small New Mexico winemaker, Milagro, occupies a prominent spot at the wine shop, which sells the Corrales winery and vineyard’s merlot, cabernet and zinfandel.

Milagro “might have found a little microclimate that works,” Leos said. “They’re varietally correct. Their wines taste like each group they’re representing.”

“I would say it’s getting there, and in some cases it’s already there,” Dan Goodman, museum director at El Rancho de las Golondrinas, said of the state’s wine reputation.

“We are doing extraordinarily well, to be perfectly honest,” said Sheehan owner and winemaker Sean Sheehan.

The winery, which produced only 2,000 bottles when it opened in 2015, now makes over 30,000 bottles, he said, and uses only New Mexico grapes from its own vineyards in Bosque Farms and Corrales, as well as from 12 other growers throughout the state, including in Abiquiú and Nambe Pueblo. The winery has received statewide awards for its merlot and chambourcin, a varietal similar to pinot noir, he said.

“We sell out of everything,” Sheehan said. “It’s going better than I thought it would be.”

But while New Mexico wines may have had successes, no one is drawing comparisons to California’s Napa or Sonoma counties, or even wine regions in Oregon and Washington.

“Nothing compares to West Coast,” Goblet acknowledged. “What I see is that we’re consistent. We’ve been around for 390 years.”

The hundreds of attendees at Saturday’s festival didn’t seem to be bothered about New Mexico’s reputation on the national or international wine stage, even as storm clouds darkened the skies by midafternoon.

“We come every year. … We always love this place,” said Mark Thomas of Albuquerque, who was there with his wife. “I’m a sweet wine drinker. I’ll take New Mexico sweet wines over others, any day.”

What: 26th annual Santa Fe Wine Festival, with more than 2o wineries, dozens of other vendors and live music