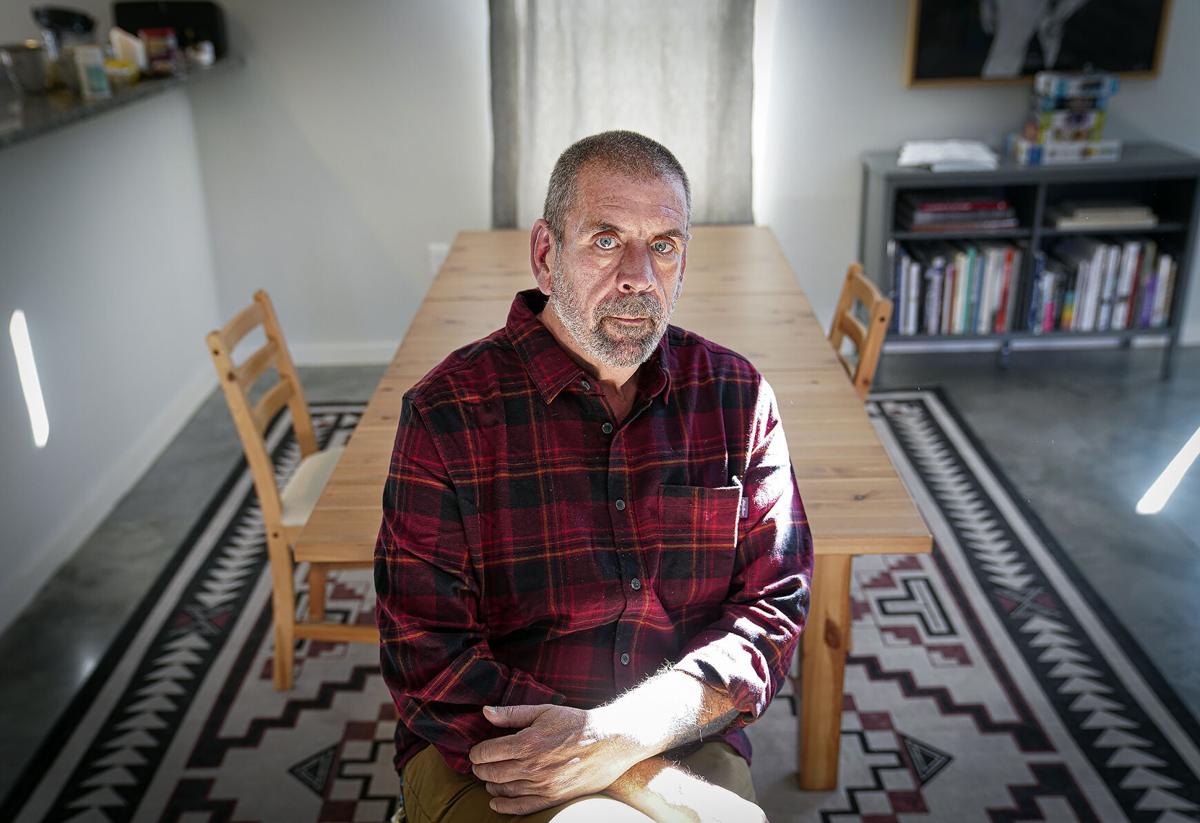 Barry Grubs sits Friday at an empty dining room table at a friend’s home. Grubs has changed his original plans for a large Thanksgiving celebration because of the pandemic. 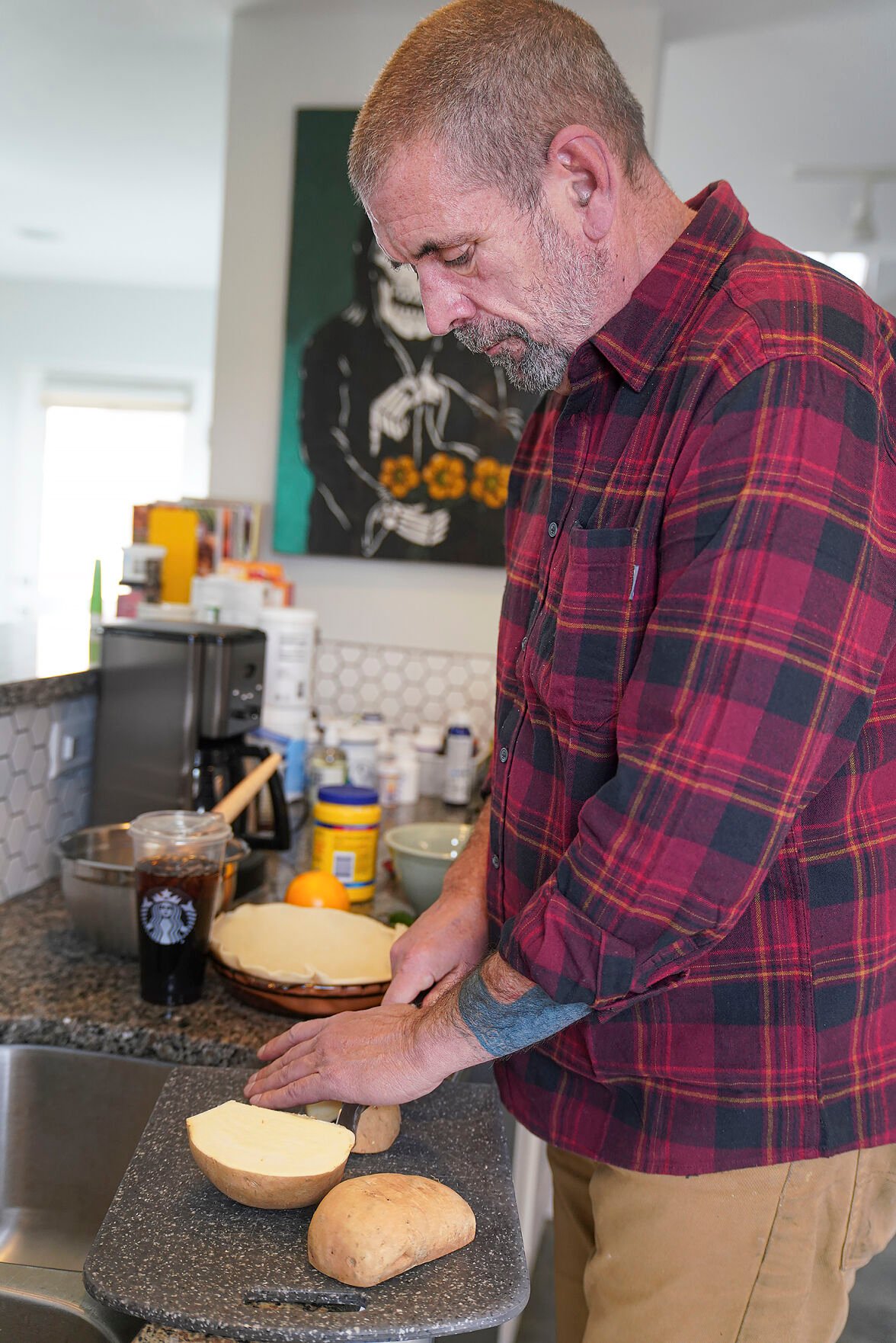 Barry Grubs prepares food Friday in a friend’s home. While he has changed his Thanksgiving plans, Grubs says, ‘I think the pandemic has given me the opportunity to slow down and stay in the moment. I have more of an opportunity to do some of the things I always wanted to do but never seem to have time for.’

Barry Grubs sits Friday at an empty dining room table at a friend’s home. Grubs has changed his original plans for a large Thanksgiving celebration because of the pandemic.

Barry Grubs prepares food Friday in a friend’s home. While he has changed his Thanksgiving plans, Grubs says, ‘I think the pandemic has given me the opportunity to slow down and stay in the moment. I have more of an opportunity to do some of the things I always wanted to do but never seem to have time for.’

Barry Grubs started inviting friends to his home for Thanksgiving dinner about two months ago.

Grubs, who planned to smoke a turkey for his family and guests, is known to spend three days prepping and cooking for the holiday, which provides his favorite meal of the year.

“We had originally planned on having a big dinner and probably invite eight or 10 other people,” said Grubs, 59.

“Slowly, over the course of the last probably three weeks, the more we’ve talked about it, the more we just were feeling uncomfortable with it,” he said. “We thought, ‘Well, maybe we’ll just cut it back and have, you know, a couple of people.’ And then we decided, I don’t know, maybe a week ago, 10 days ago, that we’re just not gonna have anybody.”

Amid an alarming surge in coronavirus infections and a death toll that continues to grow, a holiday known for bringing people from different households together is stuffed with fear, sadness and discomfort as the highly contagious disease shows no signs of relenting.

The Centers for Disease Control and Prevention says gatherings with family and friends who don’t live under the same roof can increase the chances of getting or spreading COVID-19, as well as the flu.

“As cases continue to increase rapidly across the United States, the safest way to celebrate Thanksgiving is to celebrate at home with the people you live with,” according to the CDC.

“I know it’s hard because we’ve had eight months where we can’t be with our friends and families,” she said during a virtual news conference. “Do everything in your power not to mix households. I know that that’s asking a lot because Thanksgiving is exactly how we celebrate, bringing our families from multiple households together. This is ripe for spreading this virus.”

The governor said contact with nonhousehold members, even in a small Thanksgiving gathering outside, could help spread the virus.

“It is really, really high risk and it’s something our modeling team is incredibly concerned about,” she said, referring to the group that tries to forecast coronavirus trends in New Mexico.

The Thanksgiving warning wasn’t new: Lujan Grisham also warned about the deadly consequences of large gatherings in her news conference the week before.

“I want my family to be intact and whole and ready for the Thanksgivings that are coming, and I hope to enjoy a multitude of family holiday traditions,” the governor said. “But far too many families in America, and I hope that’s not going to be true in New Mexico, are going to choose to come together, and they’re going to end up being together again to attend a funeral for one of those family members because they had Thanksgiving together. It’s not worth the risk.”

While some families and friends will undoubtedly ignore such warnings, others are taking the situation seriously.

Lara Barela said she usually has a “full house” for Thanksgiving.

“Our daughter Delani just this [morning] told me she can’t wait to see her whole family,” Barela wrote in an email Wednesday. “I had to break the news and explain we were probably just gonna be us, which is our household of five.”

Barela, who has a “combined family” of seven children with her husband and six grandsons, said it’s going to be difficult for her to “downsize” their Thanksgiving meal.

“I’m used to cooking for an army of family,” she wrote. “But we know what is best as we strive to do our part to making Santa Fe a safe place for us all to live and love in.”

In a telephone interview Friday, Barela said she’s unwilling to put her family at risk. Her father, who is in his 80s, lives with her family.

Nevertheless, Barela said she still bought a 25-pound turkey. She said she’s thinking about making plates of food for her other children who live in town.

“Maybe we’ll do a delivery where everybody gets their plate and they can all be in their home and we’ve shared with them, and they know they’re loved,” she said. “But we’re just not going to be able to sit here and chitchat, hang out and laugh like we normally do because I just feel like we have to do our part.”

Wendy Wolf said she’s celebrated Thanksgiving with friends in the past, which she calls a “Friendsgiving.” But Wolf, 46, who moved from Boston to Santa Fe at the start of the pandemic to join her husband, who got a job in New Mexico, said they didn’t know anyone when they arrived. After volunteering with Felines & Friends New Mexico, though, Wolf said she met new people, and they were planning an outdoor potluck on Thanksgiving.

“We just all got excited sharing recipes and ideas for what we want to make to the point where one of them had to run out to get food because she was so hungry,” she said, laughing.

But when the governor advised New Mexicans to shelter in place, Wolf said the plans for an outdoor potluck were canned.

“To me, even eating together outside is too close,” she said. “Spending time together masked outside [and] talking seems OK, but eating is not because you spend a lot of time talking while you eat.”

Wolf said she doesn’t want to repeat a mistake that has cost others dearly.

“There’s so many reports of, like, weddings where people just take the masks off to eat and that’s it, like everybody gets COVID,” she said. “I know outside, you’re supposed to be safer and distant, but I went out to eat twice in September outside, and both times felt incredibly unsafe.”

Wolf and her friends still plan to celebrate Thanksgiving with a “no-contact” potluck.

Though the logistics haven’t been worked out, Wolf said she figures they’ll either package up portions to trade without contact or take food to one person’s driveway, place the dishes on a table and then take turns filling containers to take back to their own homes.

“If you care about your family and your friends, don’t eat together,” she said. “It’s not worth it. No turkey is that good.”

Victoria Bruneni, who owns a catering/food truck company and also is part-owner of Santa Fe Airport Grill, said she’ll be working on Thanksgiving, delivering meals for The Life Link and people in the film industry. She said she normally has a “fairly large get-together” with family and friends, including people who sometimes fly in from out of state.

“I wouldn’t even have considered having a large get-together right now with COVID — just wouldn’t even cross my mind,” she said. “It also turns out that I’ll be working all day anyway, so it doesn’t quite matter.”

But Bruneni said she still plans to celebrate Thanksgiving with her immediate family.

“My dad lives here and my [13-year-old] daughter lives here, so we’ll probably be doing leftover Thanksgiving because I have so many meals that I’m delivering,” she said.

Santa Fe City Councilor Michael Garcia said he planned to set up a Zoom meeting with his family and encouraged people to check on one another.

“I think it’s critical that we see each other, telling each other how much we care about each other and then just make sure we’re in constant contact because, as we all know, the holidays are one of the biggest times throughout the year where depression is on the rise, folks feel isolated, and that’s only going to be increasing due to everybody having to stay home due to this pandemic,” Garcia said during Wednesday’s City Council meeting.

While large family gatherings may be missing this year, other Thanksgiving customs don’t have to go out the door, he said.

“Eat lots of turkey, lots of pie, watch some football,” Garcia added. “And please be safe out there.”

Grubs, who will spend Thanksgiving with his partner, John Pancake, and Pancake’s brother Larry, who lives with the couple, said he has a lot to be thankful for this year despite the life changes brought on by the pandemic.

Grubs said he’s “incredibly grateful” that none of his close friends or family, with one exception, have gotten sick from COVID-19 so far.

“I think the pandemic has given me the opportunity to slow down and stay in the moment,” he said. “I have more of an opportunity to do some of the things I always wanted to do but never seem to have time for.

“I’m grateful for the new vaccine, and I’m hopeful that things will start to change for the better and that life will return to whatever the new normal is going to be,” he added. “I am most grateful for everything that I have. So many people don’t have the same opportunities that I’ve been given, and I don’t want to take that for granted.”

Biden's right. It's going to be a dark winter...and it will get darker after January 20th.

Take heart New Mexicans! We'll get through this. Make your Thanksgiving Day this year a special one.