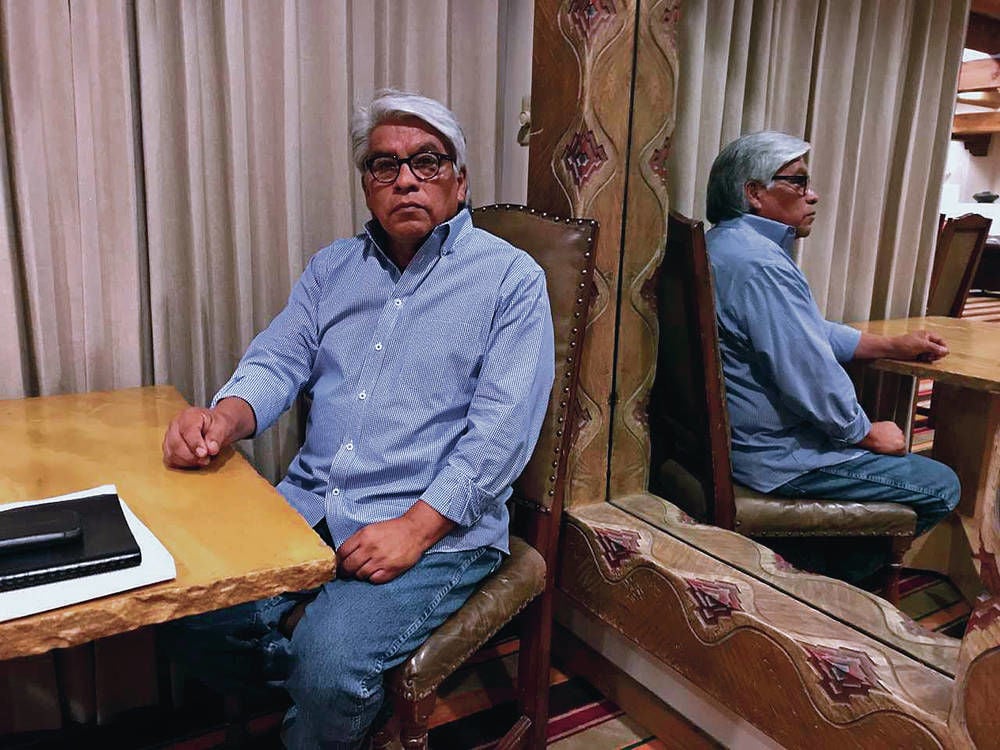 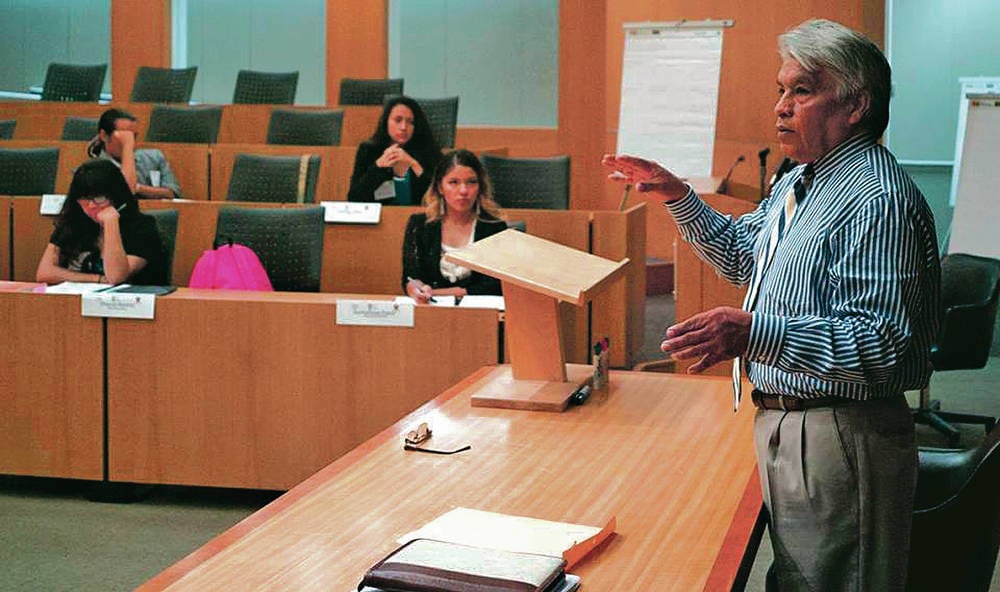 Regis Pecos, a Princeton alumnus and co-director and co-founder of the Summer Policy Academy, in 2016 addresses the program’s 18 participants, who come from 16 pueblos and the Navajo Nation. Courtesy Princeton University

Regis Pecos, a Princeton alumnus and co-director and co-founder of the Summer Policy Academy, in 2016 addresses the program’s 18 participants, who come from 16 pueblos and the Navajo Nation. Courtesy Princeton University

With only 50 bucks in his pocket and four pieces of borrowed and mismatched luggage at his feet, Regis Pecos sat on a street bench some 2,000 miles from Cochiti Pueblo, ready to cry.

“I arrived at Princeton after midnight and everything was closed,” said Pecos, recalling that lonely night in 1972 at the New Jersey university.

Though he had been accepted to one of the nation’s most prestigious higher educational institutions, Pecos felt alone and displaced, questioning whether the self-described “little reservation boy” had made the right decision to leave New Mexico for an education on the East Coast.

Pecos didn’t give up and go home. He graduated in 1977 from Princeton, where he later served on the university’s board of trustees. He is believed to be the first American Indian to serve in that role at any Ivy League school.

He may have cemented his standing in recent weeks by successfully threading a difficult needle: putting together an agreement to retire the Entrada, the controversial re-enactment of Spanish conquistadors reconquering Santa Fe 12 years after the Pueblo Revolt of 1680.

The monthslong private discussions resulted in a historic agreement to end the century-old event, which had ignited raucous protests in recent years and inflamed simmering racial tensions.

Former Isleta Pueblo Gov. Edward Paul Torres, chairman of the All Pueblo Council of Governors, said he asked Pecos to represent the group in the discussions because Pecos is intelligent, articulate and knew the history of the Entrada better than most.

“I think that sums it up right there,” he said. “There’s not anybody that can replace him because he knows so much, has so many connections, and on and on.”

Pecos tried to downplay his role in the negotiations, saying he was “only the facilitator who was blessed with the trust of many.” He credited the Caballeros de Vargas, a religious group that put on the Entrada, as well as the Santa Fe Fiesta Council and Tesuque Pueblo leaders, among others, for the final outcome of the negotiations last month.

While his job was to build consensus “that something needed to be done,” he said it was up to the city of Santa Fe and the Archdiocese of Santa Fe to engage the key players who were responsible for putting on the event.

Only they could decide whether to end it, he said.

“No one person can ever accomplish anything without the collective support of many, and that is how this has evolved,” Pecos said. “It took many people ultimately sharing their core values and allowing those values of love, respect and compassion and the shared faith [of Catholicism] to guide the process.”

That kind of diplomacy may be Pecos’ special gift, but it’s not the only one. People call him a statesman, a charismatic leader, a skilled and experienced negotiator, and a strategist who is passionate about education, culture, language and social justice issues.

“Everybody seeks his advice,” retired New Mexico Supreme Court Justice Patricio Serna said. “I respect him, and I admire him, and I think everybody that knows him does.”

But do that many people really know Regis Pecos? Maybe not.

While Pecos is a familiar figure in New Mexico and state politics, he is also one of those rare people who can fly below and above the radar at the same time.

“Everything I know about him has come from things that happened at the Legislature, so I really don’t know … the untold story of Regis Pecos,” House Speaker Brian Egolf said.

Often the best-dressed person in the room, Pecos comes from humble beginnings. He was born and raised in Cochiti Pueblo, a small but culturally rich reservation along the Rio Grande southwest of Santa Fe.

His name reflects New Mexico’s intertwining of culture and religion, which may have made Pecos, a devout Catholic, the right person to lead the Entrada discussions. (Pecos sought a blessing from his priest before embarking on the negotiations.)

Pecos said the name Regis comes from a Franciscan priest named Father Regis who was close friends with his grandfather. His surname comes from his descendants of Pecos Pueblo. And his middle name is Salvador, after a Hispanic farmer friend of his grandfather’s.

Pecos said his parents were “incredibly loving and nurturing people.” He remembers coming home from school to the smell of fresh tortillas and baling hay alongside his father, Jose Dolores Pecos.

Pecos said his mother, Carolina, was a student at St. Catherine Indian School in Santa Fe.

“My mother’s mother … died when she was a child and so my grandfather sent her to St. Catherine’s,” Pecos said. “My mother remembers when Mother Katharine [Drexel], who founded the school, would come to visit. All the children and students would line up to greet her. When mom was alive, Mother Katharine was canonized as a saint. Isn’t that remarkable?”

“But he would tell stories of running away from boarding school,” Pecos said. “He would say he was a proud runaway.”

Neither his mother nor his father finished high school. His mother was a housewife, raising Pecos and his three brothers, and his father was a bus driver for Bernalillo Public Schools, from which he retired after 30 years.

“My life and core values [of love, respect and compassion] were defined very early,” Pecos said.

Pecos has fond memories of growing up in Cochiti, from racing to the fields after school to help the elders “still harvesting with their wagons” to shooting birds with homemade slingshots and then selling the feathers for a few pennies or a nickel to an old man who used them for religious ceremonies.

“So simple a life, but it was beautiful,” he said.

In the summers, he said, he and the other pueblo children would spend all day swimming in the Rio Grande.

“We used to joke that we were part of the contributors to reducing the quantity of silvery minnows because we used to get our T-shirts and go alongside the river and catch them and fry them right there and eat them with the bones and everything,” he said, smiling.

But “at the end of one of those long, happy days,” tragedy struck when his youngest brother, Jay, suffered cramps while swimming across the river. Pecos said he and his cousin tried to save him.

“I witnessed my little brother’s drowning,” he said, tears welling. “I was in eighth grade and he was a seventh-grader.”

Pecos grew up in a three-room home with a kitchen, a little living room and a big room where they slept.

“When I was much younger, my brothers would study in the kitchen, and they would hang a bedspread because in the next room is where we slept on the floor,” he said. “I never really heard [my parents] pressure them as much as they would be encouraging them to do well.”

Pecos attended a federal day school at the pueblo until sixth grade.

“I grew up in a time that in my own community, the federal government’s policy was to prohibit the speaking of our languages in these day schools situated in our own communities,” he said. “Perhaps the harshest treatment was when you were caught to have your mouth washed out with soap by a member of your own community.”

Despite the prohibition, Pecos maintained the Cochiti language, saying it was “deeply embedded” and spoken at home and in the community.

Starting in seventh grade, Pecos attended Bernalillo public schools. He said he did well in school but that his passion was baseball.

“Baseball was my love,” he said. “My dream was to play Division I baseball.”

Pecos said Bernalillo used to scrimmage against Albuquerque Academy, and a coach there knew him and asked him what he wanted to do after high school. The coach, he said, took him to a bulletin board at Albuquerque Academy containing information “of all the prestigious prep schools around the country.” The coach encouraged him to apply for summer school.

Pecos, then 15, followed his advice and went to Phillips Exeter Academy in New Hampshire. He reached the school in a Greyhound bus because his family couldn’t afford a plane ticket. At the school, kids were already talking about where they were going to apply to go to college.

“It was the first time I had heard about Princeton and Harvard and Cornell and Columbia and Dartmouth,” he said. “I was like a fish out of water.”

Back in New Mexico, he received a general delivery letter from Dr. Alfonso Ortiz, a famous Native American anthropologist who was on the faculty at Princeton, encouraging him to apply.

Pecos remembers receiving a packet from Princeton in the mail.

“I was hesitant to open the package and I waited until everybody was asleep,” he said. “The first words were ‘Dear Regis.’ The first word below ‘Dear Regis’ was ‘Congratulations.’ My heart started beating fast. I don’t know if it was because I was happy or I was afraid.”

Pecos said he put his dreams of playing baseball aside when his grandfather, who was blind most of his life, asked him how playing the sport was going to help his people.

“My grandpa used to talk about how core values guide us in ways that keeps us on track, and that when you make decisions driven by your defined core values, you’ll never make the wrong decision,” he said.

Carmen Lopez, a citizen of the Navajo Nation who is the executive director of College Horizons, a nonprofit organization that supports the higher education of Native American students, said she considers Pecos a mentor.

“He’s the type of person that comes once in a generation,” she said. “You don’t come across many people like him. He’s a real gift and a blessing to me, and I think to the state of New Mexico, because there aren’t many people that can do what he does.”

A man of ‘profound impact’

Regis Pecos has a long and impressive résumé.