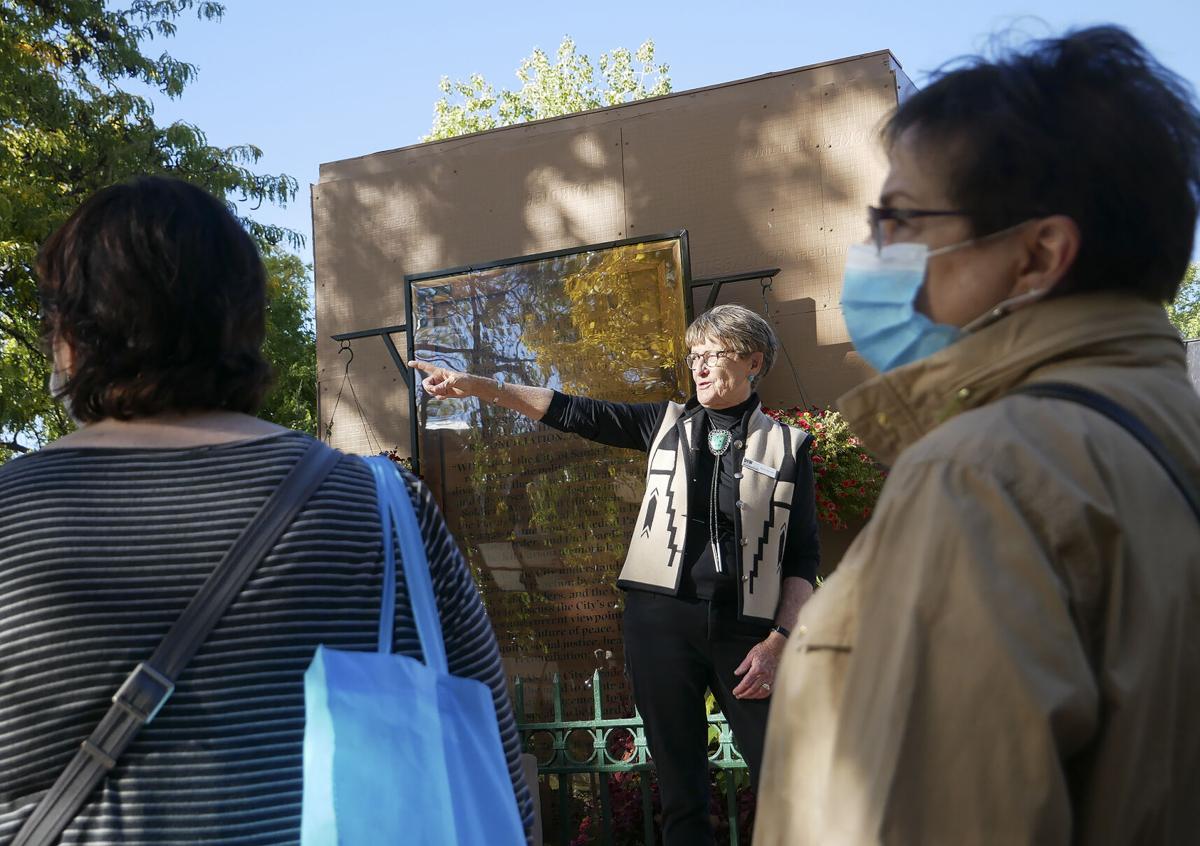 Kathy Swanson, a guide with Destination Southwest in Albuquerque, speaks to tourists Monday in front of the wooden box encasing what remains of the Soldiers Monument, which protesters toppled last year. The Plaza was more subdued this year on Indigenous Peoples Day. 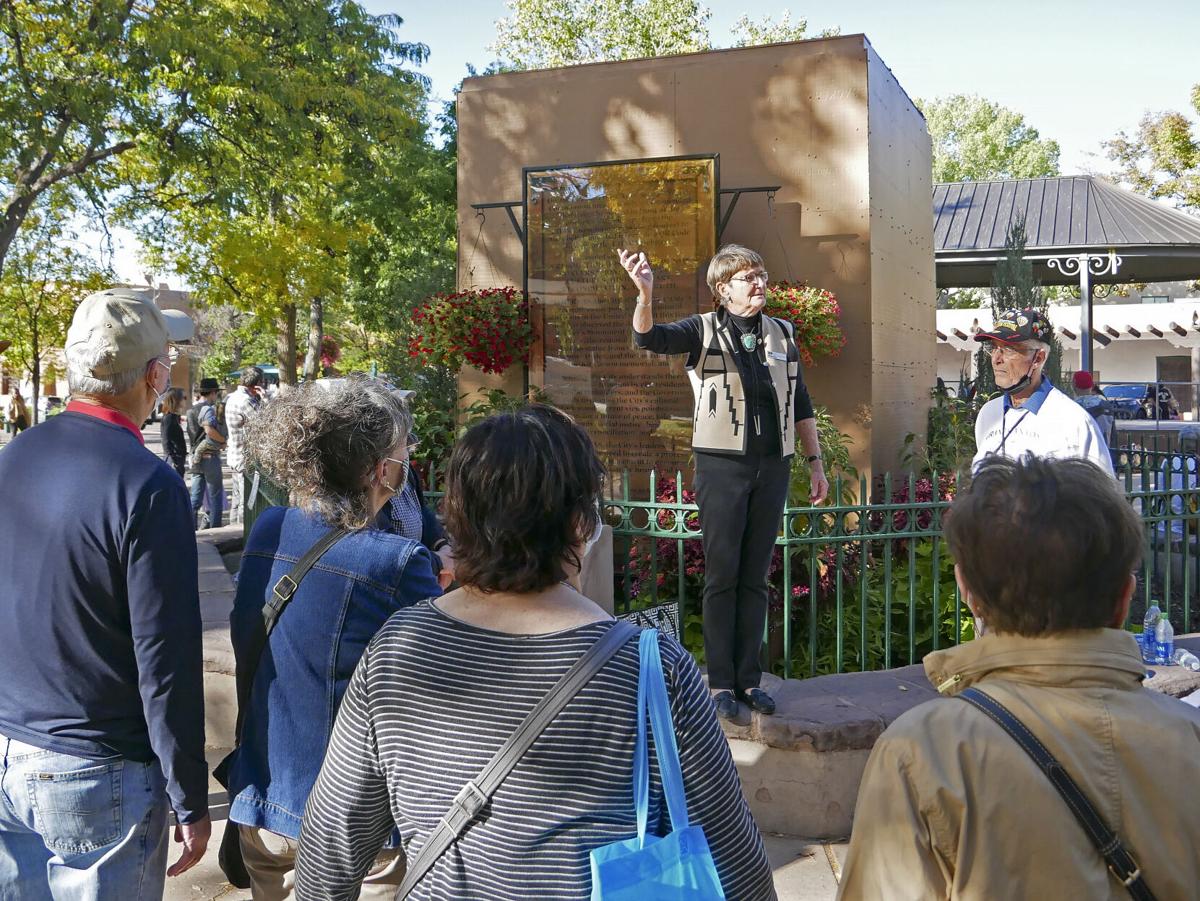 Kathy Swanson, a tour guide with Destination Southwest in Albuquerque, speaks to tourists in front of the stump of the Soldiers' Monument on Monday.

Kathy Swanson, a guide with Destination Southwest in Albuquerque, speaks to tourists Monday in front of the wooden box encasing what remains of the Soldiers Monument, which protesters toppled last year. The Plaza was more subdued this year on Indigenous Peoples Day.

Kathy Swanson, a tour guide with Destination Southwest in Albuquerque, speaks to tourists in front of the stump of the Soldiers' Monument on Monday.

The Plaza on Monday was filled with merchants, tourists, music and the smell of grilled foods from local vendors — an Indigenous Peoples Day that had little of the drama of the previous year.

Unlike the 2020 holiday, when protesters toppled the Soldiers Monument, Santa Fe’s downtown was relatively quiet. Several police officers could be seen monitoring the area and posted at various corners around the Plaza, with patrol safety aides mingling with the public.

Police presence had been noticeable throughout the weekend.

Other sites with monuments, including the U.S. District Courthouse and the Cross of the Martyrs, also were quiet.

Some Indigenous activists and performers came to the Plaza to celebrate the holiday. Michael Garcia of Acoma Pueblo was the first of several to arrive, noting he felt compelled to offer prayer and song.

Garcia, 34, said he has lived in Santa Fe for four years after finding work in the area. Monday was his third time performing at the Plaza, he said.

“I came not only on behalf of Indigenous Peoples Day, but it’s always been a calling and an intuition of mine to come down here no matter what event is going on,” Garcia said.

He said he hopes to have an impact through prayers of healing that’s “long overdue.”

“We often look at our past and look at our present and try to combine the two together,” Garcia said. “Of course, we may have conflict, division — and of course, that tension may be there, but that’s what my purpose is, to pray for that healing.”

His performance in the Plaza was followed by hoop dancers from the Lightning Boy Foundation, a nonprofit that provides hoop dance instruction to youth in Northern New Mexico.

Found this article https://www.nbcnews.com/news/latino/racist-brutal-past-or-hispanic-history-latinos-clash-over-spanish-n1232412 Alan Webber has clearly used to Obleisk as a political move without even understanding the history of the statue. He claimed in his campaign he would "heal and reunite Santa Fe" and has effectively divided the community even more. I'm from Santa Fe, I'm mixed native, hispanic, and white and my family has been in New Mexico for generations on both sides. I celebrate all parts of my unique culture and don't try to rewrite our unique history in this area. I hope Joanne Coppler-Vigil, wins for mayor as she is the strongest candidate to clean up the mess that Webber made and heal the deep wounds in our community.

Save Santa Fe From Alan Webber and his councilors. Vote

What a terribly written article. Only one source was interviewed. It's clear that this paper is biased and slacking on real journalism. I'm sure most of the staff, including the editor in chief, are not from Santa Fe and lack a deep understanding of the culture here. Not surprised since the current mayor also lacks cultural sensitivity as well and seems to have strong anti-mexican sentiment. You can't be racist towards one group of people and scapegoat them. Anyone who is racist towards hispanics or mexicans lacks a deep understanding of the history and culture in this area. You cannot pick and choose which minority group to be racist towards. Please staff at the New Mexican and Alan Webber, learn some New Mexico History! We had to take it in school growing up here and it should be a requirement for any mayor. But hopefully we will learn from the mistakes of the past four years and never elect a mayor like Alan Webber again. http://news.unm.edu/news/hispanics-progress-against-racism-but-have-long-way-to-go

So much for chaos, terror, and “Portland style socialism” in the streets of beautiful Santa Fe. . .

Russell Scanlon – Your reference to “Portland style socialism” its a perfect example of a red herring, i.e. "The red herring fallacy is a logical fallacy where someone presents irrelevant information in an attempt to distract others from a topic that's being discussed, often to avoid a question or shift the discussion in a new direction."

Nice try, no luck guy. What is happening here has no real link to the events in Portland.

You do know that Alt-Right Neo-Fascist punks have been launching violent weekend raids on Portland for some years now. And that 'anti-socialist gang violence' was among the first steps of German Na$i's in their successful efforts to seize state power?

No, you probably don't know that. Would be laughable, except for the real world danger your ignorance of history & process poses to our American Experiment in Democracy.

Actually I was being sarcastic. Sorry that didn’t come across.

Russell Scanlon- thanks for the clarification, that remark did not sound like you!

I’m a relative newcomer to this place so I speak with respect and deference about the entire obelisk incident. But I definitely remember plenty of commentary in these pages about how SF was about to devolve into chaos and left wing cannibalism. And I just keep thinking that given the highly charged and toxic political climate at this time last year, things could have been much much worse.

"A small police presence?" Are you kidding me?

The SF New Mexican has neglected to mention that in addition to the three police cars in front of the Palace of the Governors, and another two around the corner on Lincoln, there were stationed between the post office and convention center another dozen cars, including a large armored S.W.A.T. vehicle.

If only the mayor was as concerned about lawlessness on the Plaza in 2020 when it wasn't an election year.