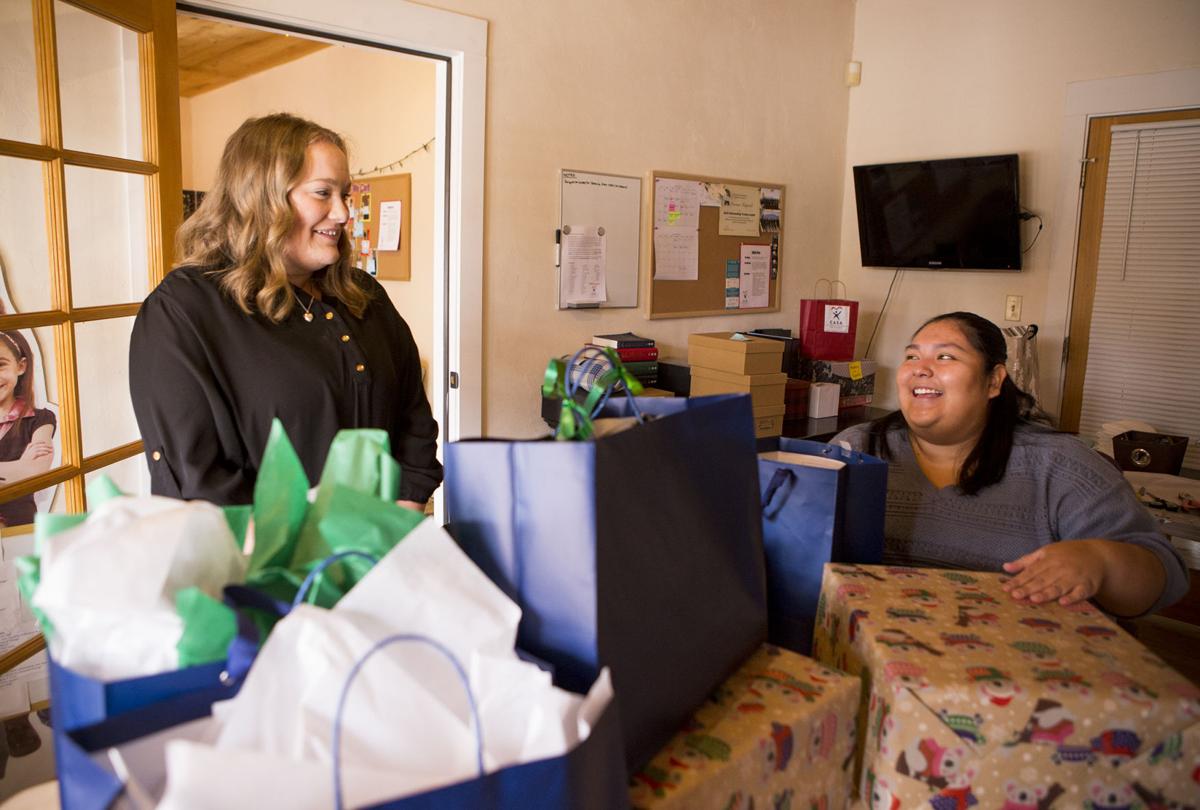 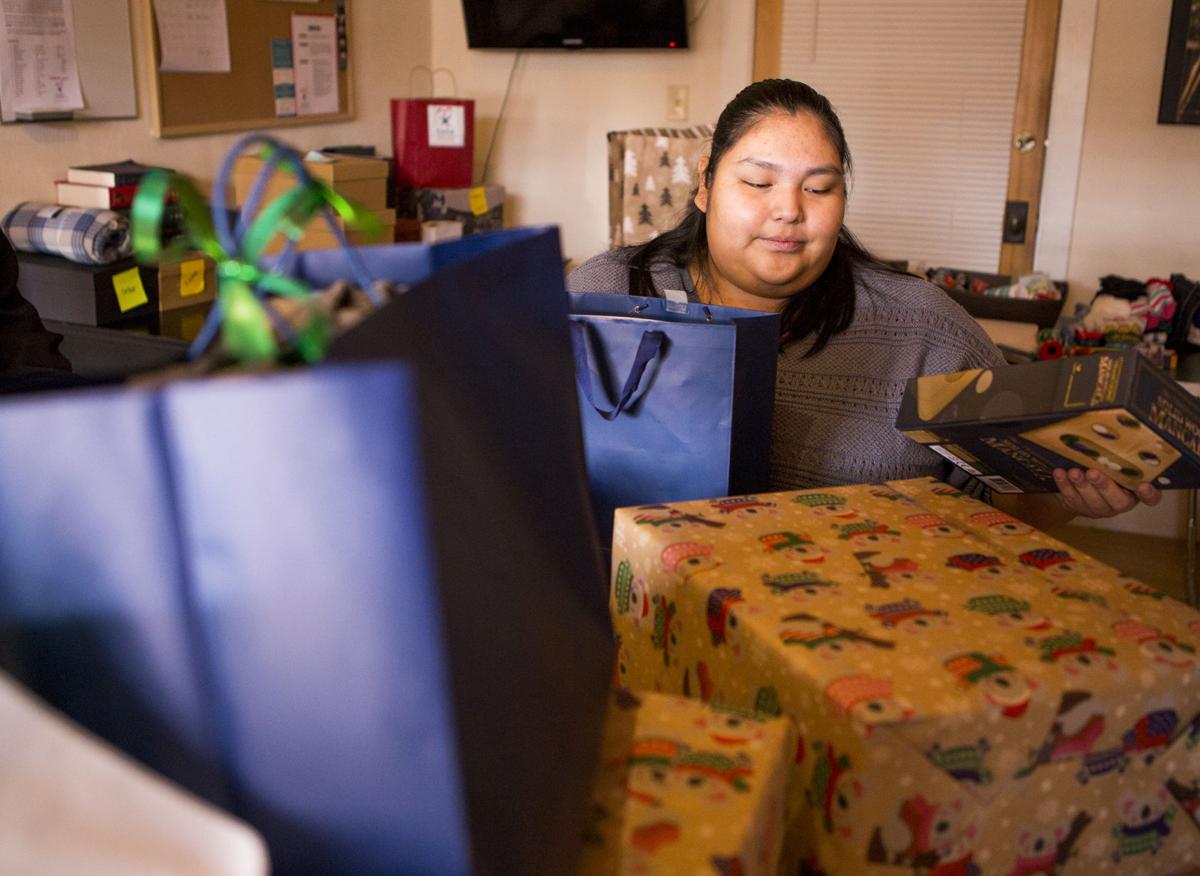 Veronica Krupnick, a foster youth advocate with the state First Judicial District's Court Appointed Special Advocates program — known as CASA First — organizes holiday gifts for foster youth ages 14 to 18. 'I’m healing myself through healing others,' said Krupnick, who was helped by CASA when she was a child. 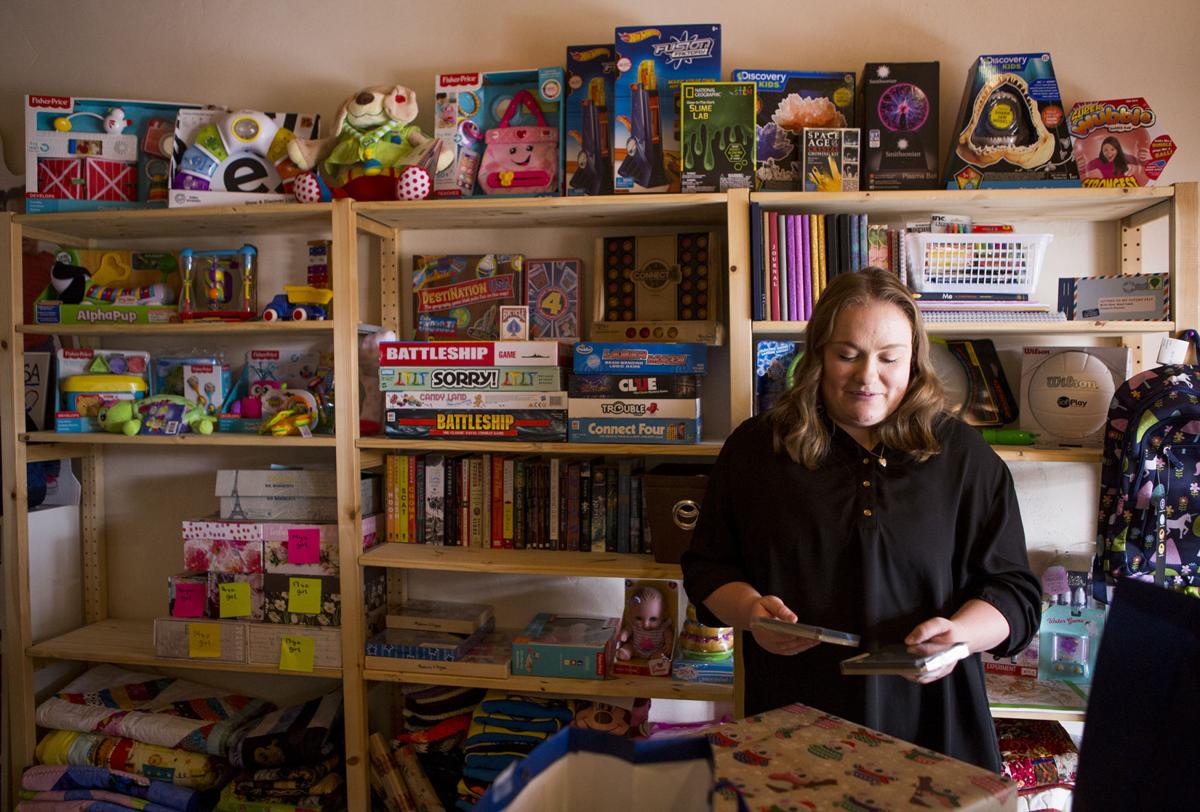 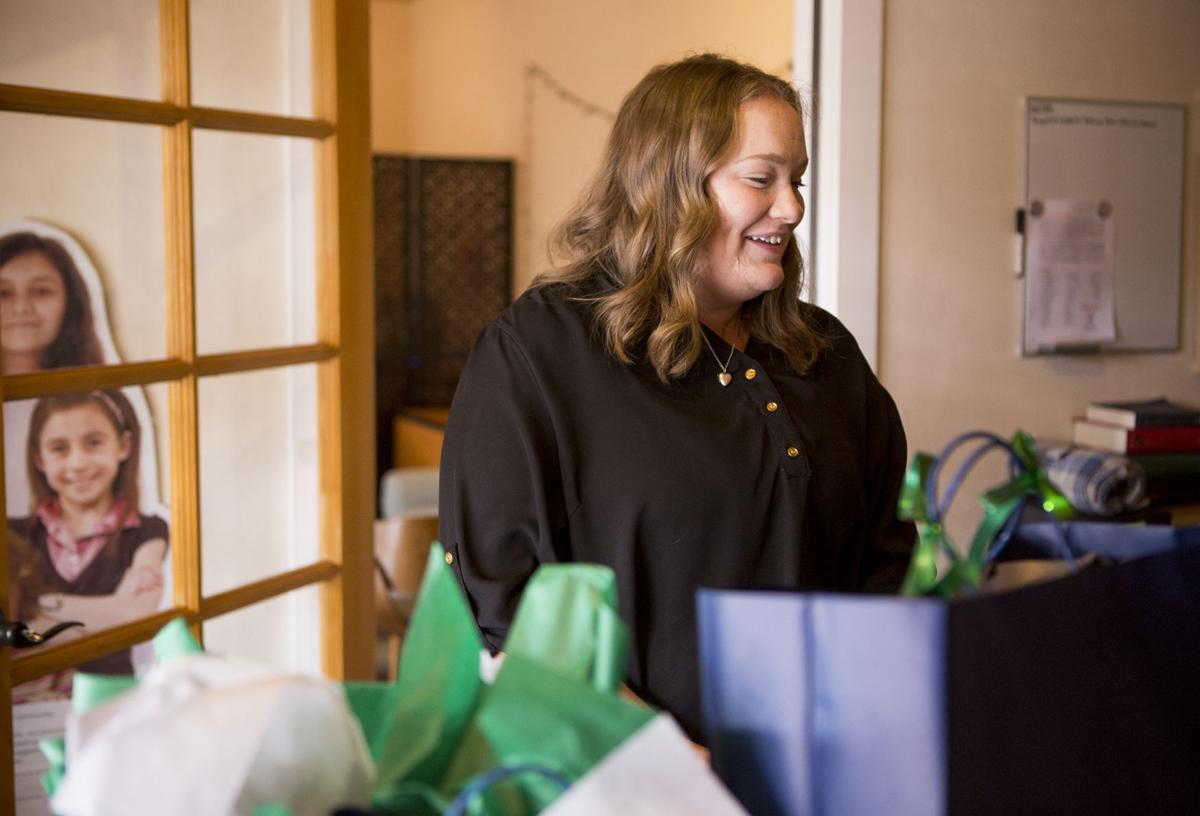 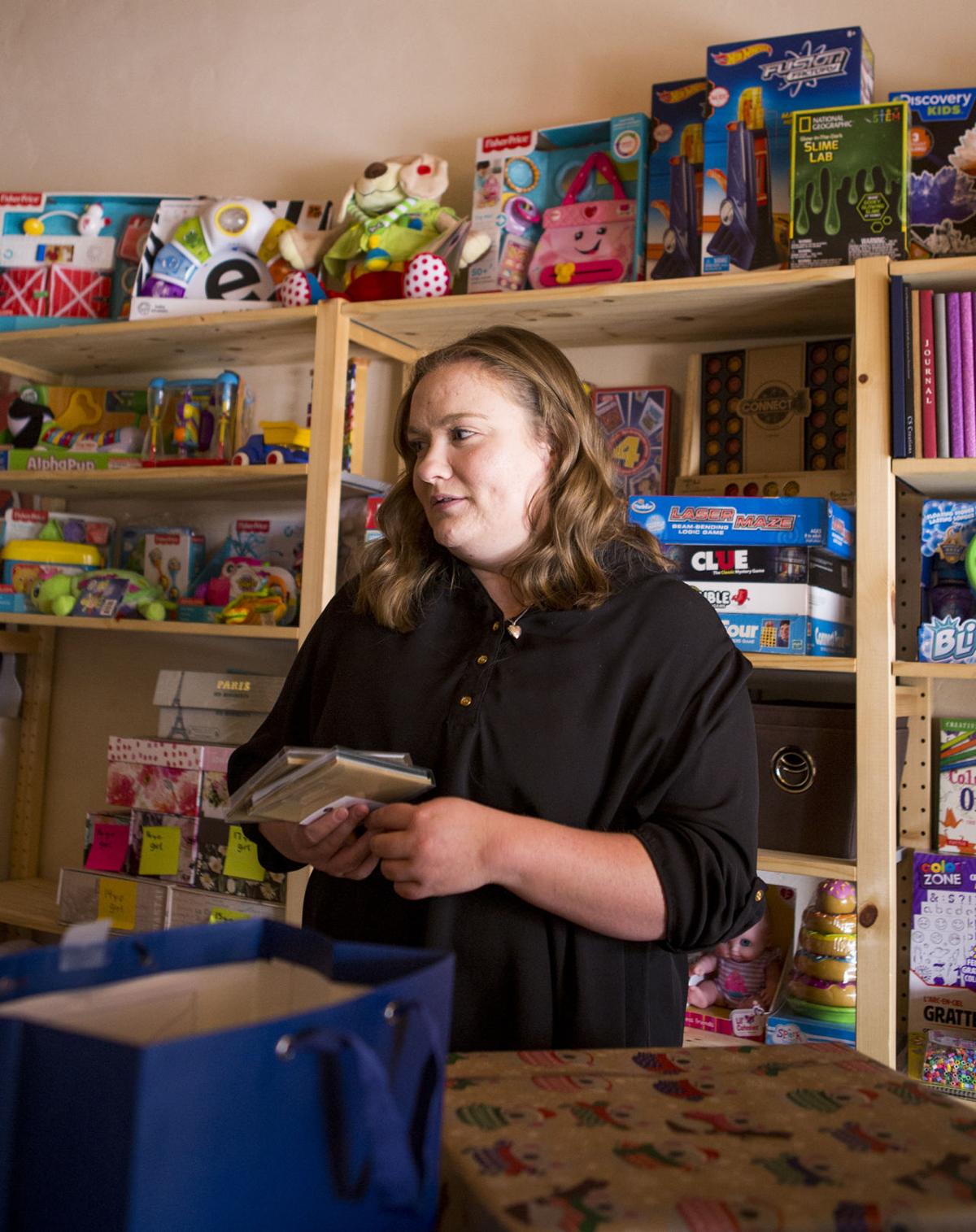 Veronica Krupnick, a foster youth advocate with the state First Judicial District's Court Appointed Special Advocates program — known as CASA First — organizes holiday gifts for foster youth ages 14 to 18. 'I’m healing myself through healing others,' said Krupnick, who was helped by CASA when she was a child.

Organizers with the state First Judicial District’s Court Appointed Special Advocates program — better known as CASA First — say people usually think of 5- and 10-year-old children with toothy grins when it comes to kids in foster care who might need some extra holiday cheer.

But this holiday season, she said, she’s determined to put an end to their invisibility.

For the first time, CASA First is distributing personalized holiday self-care packages this month specifically for youth ages 14 to 18. Organizers said the gifts, most donated by local businesses and nonprofits, serve as reminders to teens in state custody that they are valued during a season when they can feel especially isolated.

“Little kids can get so much [at Christmas], it’s almost like they’re overwhelmed,” said CASA First Executive Director Annie Rasquin. “We want people to be mindful of the older kids, too. A lot of times they aren’t getting attention in that intimate, loving way” that younger kids are.

For CASA First — a nonprofit that recruits volunteers to serve as court-appointed special advocates who help ensure abused and neglected foster kids throughout Northern New Mexico are in safe care — the goal is to show that same kind of attention and care to every child, regardless of age, every day of the year, Rasquin said.

Going into foster care “is really overwhelming for these kids. They’re separated from everyone they know. Some of them were in really treacherous situations,” she said. “It’s important for them to have someone who looks after them … an adult who can really pay attention, who can really get to know them.”

Each time a child is placed in state custody, a judge appoints a trained CASA First volunteer to help guide the judge’s decisions on what is best for the child — from receiving medical care and therapy to helping reunite the child with family members, if appropriate, Rasquin said.

Often, a CASA First volunteer is the only consistent adult in a foster child’s life. Every effort, Rasquin said, is to ensure foster children “don’t get lost” in the system.

Krupnick, 23, knows firsthand the impact a CASA First volunteer can have in a child’s life. When she was 6 years old, her mother was arrested for selling drugs and weapons, she said, and she was placed in foster care in Albuquerque. Over the next four years, she was placed in seven foster care settings, including a group home.

By the time she was adopted with her sister, at age 10, “I had so much trauma and PTSD that adjusting to my adoptive family was difficult.” she said. “… When your only experience with adults is that they hurt you and let you down, and just generally aren’t reliable, it makes it really hard to trust anybody.”

Although Krupnick moved out of her adoptive home at 16 and into a residential treatment center, which was then a transitional living program for youth, she said she will always remember the impact CASA First had in her life prior to her adoption.

The entire time she had been in foster care, she said, her CASA First volunteer was there to advocate for her. The volunteer was someone “I didn’t have to tell my story to over and over again.”

“CASA made such an impact for me,” Krupnick said, noting that because the volunteer who worked with her had documented all of her negative experiences, they were able to advocate for Krupnick in court and ensure she was not put back in foster care again.

Landing a job with CASA First in October 2018 “did feel like fate, like a full circle,” said Krupnick, who also serves as a volunteer advocate, working with a 14-year-old boy.

“I’m healing myself through healing others,” she said.

Krupnick was recognized for her efforts by the national nonprofit FosterClub as an Outstanding Youth Leader in New Mexico this year.

Part of what she does, Rasquin said, is notice any gaps in which CASA First can do more to help those it serves.

While Rasquin said the organization has given out holiday gifts to kids in the past — Santa hats and pajamas, for example — this is the first year it has given personalized gifts focused on teens.

Krupnick said when she first started brainstorming the holiday packages, she envisioned small bags with candy and maybe a journal.

In addition to donated items from Hotel Santa Fe and Tewa Women United, many people in the community gave money to the nonprofit to buy hand-selected gifts. Krupnick and CASA First’s volunteer coordinator, Jessica Henderson, said they reached out to volunteers to get a better understanding of each teen’s interests and then shopped accordingly.

For one boy interested in reading the Eragon series of fantasy books, Krupnick and Henderson bought all four books in the collection. For a girl interested in art, they purchased a watercolor kit.

“We want these to be personal and delivered by someone they know,” Krupnick said, noting each CASA First volunteer will hand-deliver gifts to the foster youth they represent between now and Christmas.

Around the holidays, Krupnick said, many teens are “more aware of their situation — that they’re not with their families, that they don’t have a family.” For older teens, those age 16 or 17, she said, they realize this might be their last Christmas in a family-oriented home because they will be aging out of the foster care system.

“As a society, we put a lot of pressure on Christmas,” Henderson said. “For kids in foster care, there’s that elephant in the room, this feeling that, ‘Well, this isn’t really my family.’ ”

On Monday morning, Krupnick and Henderson sifted through numerous boxes decorated with Christmas-themed wrapping paper, stacked high atop a table in the CASA First office. Nearby, craft supplies and an overflow of small gifts sprawled across a counter.

“They’re all packed like this,” Krupnick said as she struggled to fit everything inside. “There’s not an inch in here that doesn’t have stuff.”

“If I received one of these boxes, I’d be stoked,” she added with a laugh.

Following the holidays, however, it’s critical that the generosity and care continues — not just in gift giving, but through unconditional love, Rasquin said.

“It’s long term,” she said of a Casa First volunteer’s relationship with a foster child. “Consistency and reliability is really important.”

“Having just one positive person in your life who you can count on can make a huge difference,” Henderson added.

For more information on how to volunteer with CASA First, the state First Judicial District's Court Appointed Special Advocate program, or to donate funding or goods for foster children and youth served by the program, visit casafirst.org.

Thank you for this reminder about the real meaning of Christmas and the power of love. It's the kids.