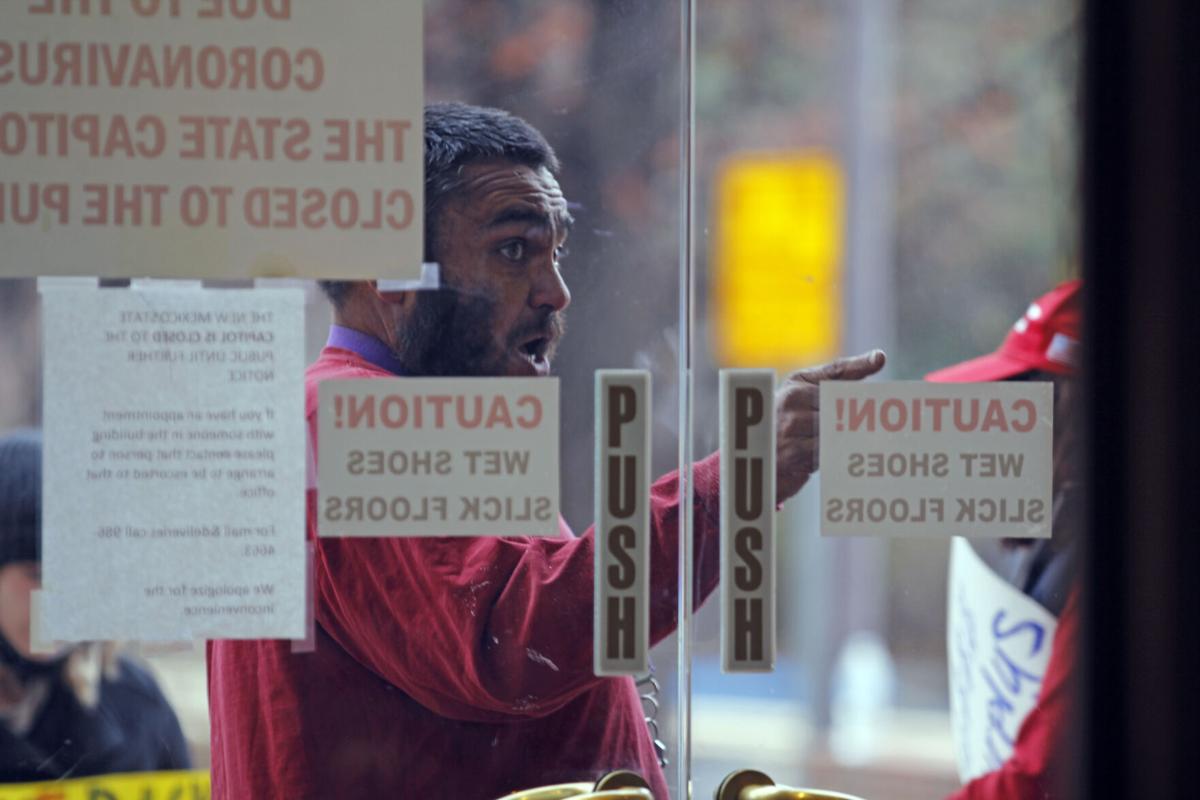 A protester yells at state police Tuesday after he was refused entrance to the state Capitol during the special legislative session. 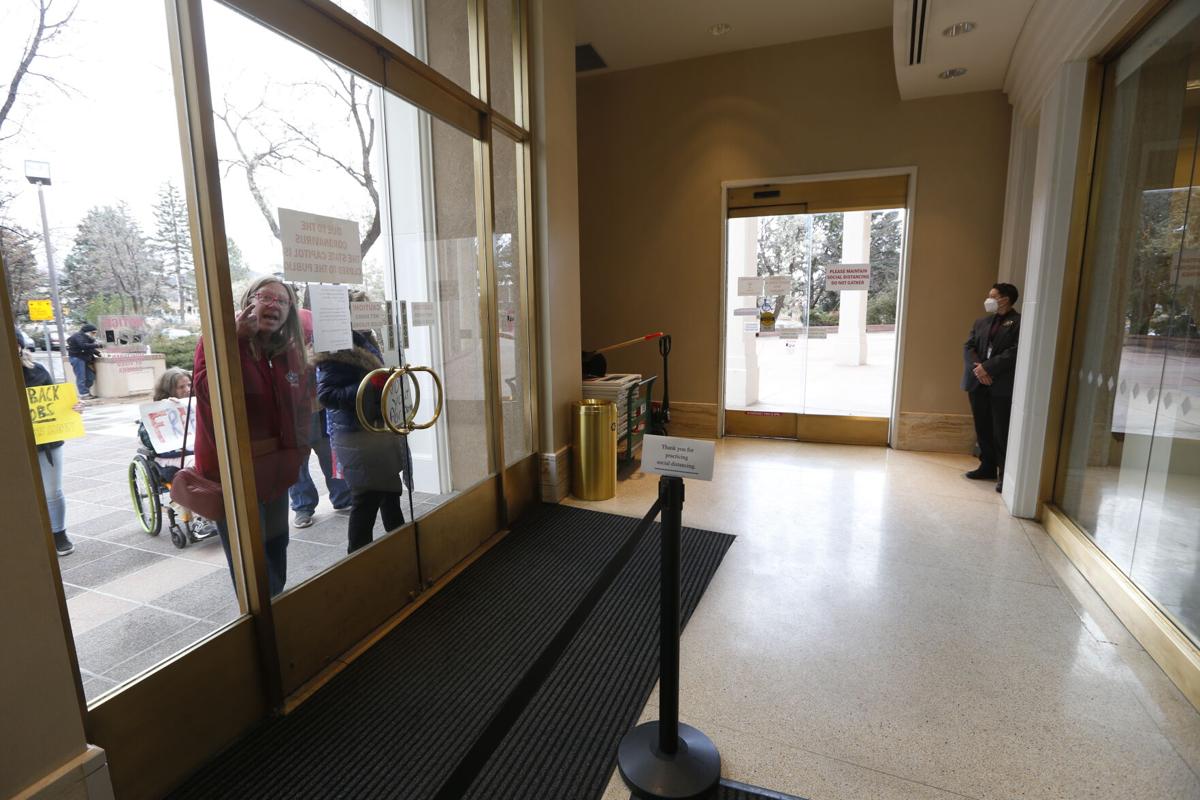 Protesters yell at security and state police Tuesday after one of them was refused entrance to the state Capitol during the special legislative session.

A protester yells at state police Tuesday after he was refused entrance to the state Capitol during the special legislative session.

Protesters yell at security and state police Tuesday after one of them was refused entrance to the state Capitol during the special legislative session.

The Santa Fe lawmaker said eight members of her immediate and extended family had contracted the coronavirus. One was on a ventilator, fighting for life, she said Tuesday.

“This is a harrowing time for a lot of people,” said Romero, D-Santa Fe.

It’s one reason she chose to participate online via Zoom during Tuesday’s special legislative session. The virtual alternative, she said, is the best way to keep her family members and fellow legislators safe.

Romero wasn’t alone in working from home. The rules set by the House of Representatives allowed members to participate live at the Capitol or virtually from their homes or offices. Several House legislators joined online. Meanwhile, Senate rules allowed members to participate live on the chamber floor or virtually from their offices in the Roundhouse — but not from home.

This mix-and-match approach to legislating — annoying to some, simple common sense to others — may offer a roadmap for the 60-day regular session scheduled to begin in mid-January. Though legislators experimented with a virtual setting during a special session in June, most hoped their days of Zoom would be over, or at least alleviated, by the time they arrived at the Roundhouse early next year.

But with COVID-19 continuing to envelop the state, and case counts expected to remain high for the next few months, lawmakers are bracing to do their work in that new world from January through March.

Tuesday’s session, they said was somewhere between a refresher course from June and a tutorial for January.

“This is an ongoing learning curve for all of us,” said Sen. Bill O’Neill, D-Albuquerque, who bounced back and forth from the Senate floor to his office Tuesday.

He gestured outside his office, where the third floor hallways of the Capitol, so often teeming with visitors, advocates, lobbyists, vendors and members of the public who can easily access the Roundhouse during normal times, were mostly empty.

Down the hallway, some lawmakers sat alone at their desks, taking part in the proceedings online.

One of them was Rep. Elizabeth “Liz” Thomson, D-Albuquerque. She saw Tuesday’s hybrid of live-and-virtual legislation as “definitely a harbinger” of things to come in the regular session.

“Whatever we do is gonna be mostly if not totally virtual,” she said. “We all like to be together, but if doing it this way saves one life, it’s worth it.”

While some lawmakers in both parties have publicly bemoaned the lack of public access to both of this year’s special sessions, Thomson said she believes going virtual can only increase public participation.

“I don’t think we see the majority of New Mexicans at the Roundhouse during the regular sessions,” she said. “This makes it easier for someone who lives in Weed [a tiny village in Southern New Mexico] to watch and make comments virtually than it would be for them to get in their vehicle and drive to Santa Fe.”

Legislators in both chambers who did attend the session in person wore protective masks and, for the most part, maintained social distancing — though some House Republicans sat side-by-side at their desks at a distance of perhaps 3 to 4 feet apart.

Others in both parties took part via Zoom, their faces magnified on a video screen displayed on one wall of both chambers.

As of late afternoon Tuesday, there were no known technical challenges, said Raúl Burciaga, director of the Legislative Council Service, which coordinates the technical and support functions of Capitol business.

“Everything seems to be working fine,” he said. “We haven’t had any technical problems, knock on wood.”

He said it’s too soon to say whether the 60-day legislative session will be run the same way. But, he said “at the very least it is a minor test run of how things may be able to work.”

Only late in the day, as legislators debated a proposed amendment to the economic relief bill, did a technical challenge pop up, as the amendment did not immediately show up on the legislative website for legislators, the public and media to review.

House Speaker Brian Egolf, D-Santa Fe, paused the debate to explain the amendment had shown up in another section of the website. After the session ended, he said, “It was in a different place than normal, we don’t know why.”

Technology did not always work so well during June’s special session, when some members of the public said they could not access the proceedings online. At times, floor session and committee debates were put on hold when lawmakers got word there were technical challenges preventing the public from viewing the discussions.

Senate floor Leader Peter Wirth, D-Santa Fe, said one problem was the use of different virtual platforms in June. The Legislature moved fully to Zoom as a venue for Tuesday’s event in an effort to smooth things out.

Senators — not all of whom wore masks during June’s session — were mandated to wear them this time around, he said. That, and the freedom senators had to work from their offices “will give us an indication of how we can do this in a hybrid method” for a 60-day session.

Several other lawmakers said they believe they can make a full 60-day session work the same way, particularly if a COVID-19 vaccine is approved and rolled out quickly.

Burciaga said “anything can happen” in the next two months before the January session but “technologically we are proving we can do it this way” if need be.

Earlier this month legislators approved a measure to allow Burciaga to engage in a rental agreement with the Santa Fe Community Convention Center to use as an alternative legislative space where committee hearings could be held with expansive social distancing measures in place.

The public conceivably could come to those hearings in limited groups. O’Neill said he hopes that’s the case so the public can take part in person. On Tuesday, some protested outside the Roundhouse because they weren’t allowed to watch the session.

Romero agreed the lack of “public weigh-in is a challenge,” adding the creative environment of a floor chamber changes when all the members are not in the same room debating and arguing about bills.

“We as social creatures like to be in the same room,” she said. “You can’t recreate that virtually.”

Based on the photos, the public who wanted to enter the Capitol were not even wearing masks. I wouldn't let them in either.