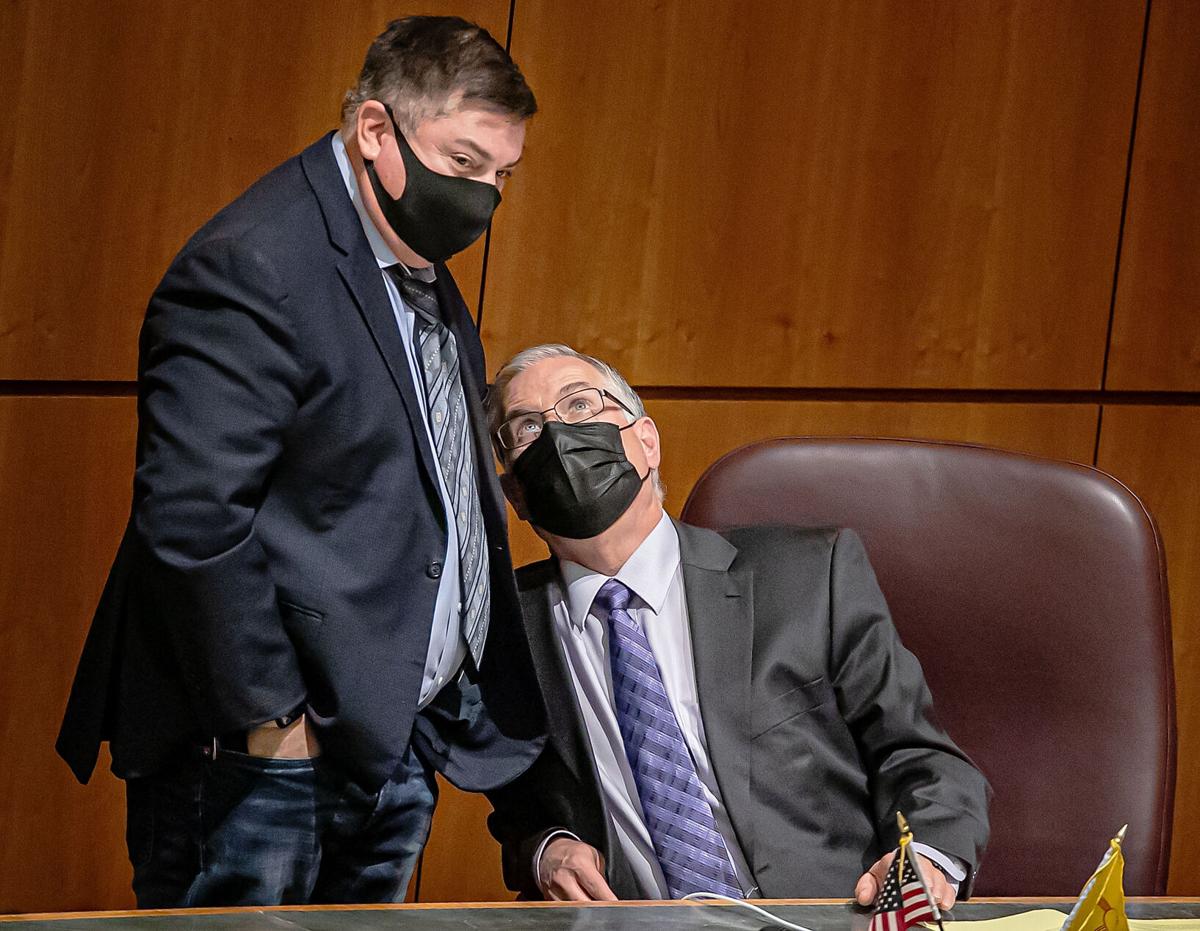 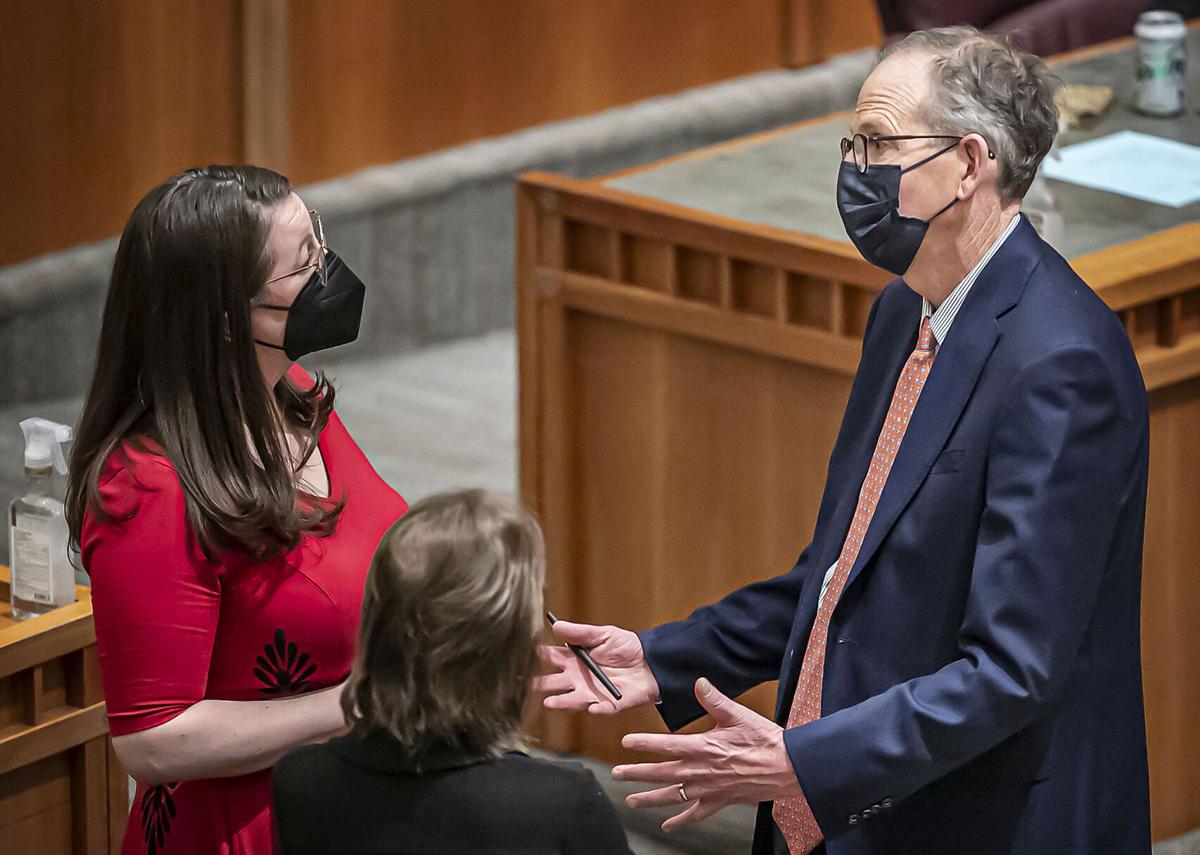 Senate Majority Leader Peter Wirth, right, talks with Senator Katy M. Duhig, left, and President Pro Tempore Mimi Stewart during December's special legislative session. The Legislature will convene for its regular session Tuesday. 'It's a 30-day budget session in an election year in the middle of a COVID spike,' Wirth said. 'It's challenging on all fronts.' 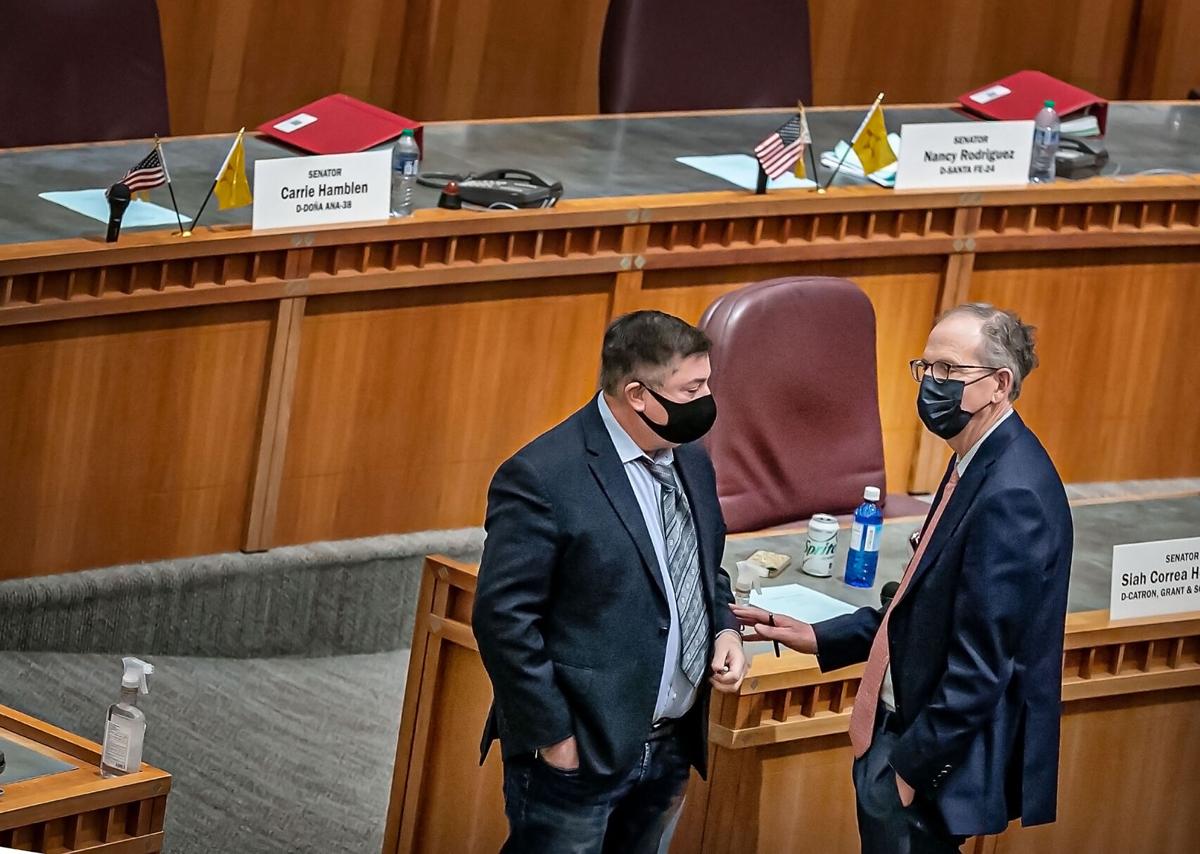 Senate Majority Leader Peter Wirth, right, talks with Senator Katy M. Duhig, left, and President Pro Tempore Mimi Stewart during December's special legislative session. The Legislature will convene for its regular session Tuesday. 'It's a 30-day budget session in an election year in the middle of a COVID spike,' Wirth said. 'It's challenging on all fronts.'

The state Senate voted Tuesday to approve a bill appropriating $478 million in federal funds to a number of infrastructure projects — including broadband expansion, road and bridge repairs, park upgrades and housing for the homeless.

But the battle over a new map for the Senate — a controversy that has stalled movement on legislation and frustrated Native activists determined to push through a redistricting blueprint they favored — continued into a third day, with legislators in negotiations over how to break the logjam and bring the special session to a close.

Leading Democratic lawmakers said Tuesday evening they are moving toward a resolution, but acknowledged it may take more time.

Senate President Pro Tem Mimi Stewart, D-Albuquerque, said the two sides continued talking Tuesday and are “much closer. We are doing what they asked us to do, which is to pause and talk to them. We are pausing and doing lots of negotiations and trying to move forward.”

“We are definitely trying to come to an agreement,” she added. “We will come to a solution within a couple of days.”

Senate Majority Peter Wirth, D-Santa Fe, said he met for about seven hours with Native leaders Monday to “push toward a productive resolution that leads to an ultimate compromise — that’s what we are trying to do.”

Wirth said House of Representatives leaders’ decision to adjourn for two days while the Senate deals with redistricting “has given us the time to have the conversations we need to have about the issue.”

As the Senate dealt with redistricting, it also pushed to funnel about a one-third of $1.1 billion in American Rescue Plan Act funds as well as another $130 million in federal funds into a state hard-hit by the COVID-19 pandemic.

Though the House already voted to approve the funding bill, the Senate Judiciary Committee’s decision to amend it by pulling $26 million in funds designed for broadband over the weekend means it has to return to the House for a vote of concurrence. That will not happen until noon Thursday when the House is scheduled to return.

The Senate still must deal with other matters, including cleaning up language in the recently approved state Medical Malpractice Act.

Wirth said that “has to get done” before the Legislature adjourns. He said he is encouraged by the movement on the infrastructure legislation as “things are beginning to narrow in on the finish line.”

Sen. George Muñoz, D-Gallup, who introduced the infrastructure bill on the Senate floor, said its impact will be “transformative” as it provides much-needed services to residents in both urban and rural communities.

But while the Senate passed the bill 36-4, not everyone was convinced. Sen. Joseph Cervantes, D-Las Cruces, said the legislation did not do enough to help the state’s health care system deal with the coronavirus crisis, which, he said, is not going to go away anytime soon.

“Or is it really about health care?”

Cervantes said one of his best friends from high school is dying of the coronavirus and probably would not live another 24 hours. Cervantes voted against the legislation along with three Republican senators.

Still, the debate over federal funding was merely a sidelight to what has become the drama of the special session: the struggle to find a way to accommodate Native American leaders who are opposed to a proposed redistricting map for New Mexico’s 42 Senate districts.

Native leaders protested the introduction of a substitute bill by Stewart, complaining the move upended a consensus plan developed by all of the state’s tribes after eight months of work.

Among other measures, the bill altered the boundaries of the consensus map to allow for an unpairing of two Republican incumbent senators, Senate Minority Leader Greg Baca of Belen and Sen. Joshua Sanchez of Bosque, who would otherwise have had to run against one another in the same district in the next election.

Some lawmakers and Indigenous leaders spent much of Monday in a closed-door meeting in which representatives from Native American communities around the state made a case for their map and asked lawmakers to explain why they wanted to deviate from it.

Though there were no follow-up meetings Tuesday, the All Pueblo Council of Governors sent a letter to Wirth, in which they wrote it is “unfortunate” the proposed changes were “made primarily to protect incumbency.”

Regis Pecos, a former governor of Cochiti Pueblo who has been involved in the discussion with Senate leaders, said Tuesday he hopes lawmakers withdraw the amendment and approve the bill as it was originally drawn.

Otherwise, he said, if the bill is approved as amended it will move forward to Gov. Michelle Lujan Grisham and put her “in an untenable situation to approve something the tribes object to, or veto it and bring everybody back” to the table.

Keegan King of Acoma Pueblo, co-chairman of the All Pueblo Council of Governors’ Ad Hoc Redistricting Committee, said Native leaders are not planning to back down.

“We stand by the [consensus] map,” he said, adding he hopes the Senate will “revert to that.”

Both chambers already have sent a new congressional map to the governor. Meanwhile, the Senate Judiciary Committee is planning to discuss and vote on a House-approved Public Education Commission bill Wednesday morning.

If lawmakers finish all their work Thursday, the session will have lasted 11 days. Over the past three decades, special sessions focused on redistricting have run between 10 and 19 days.

The average estimated daily cost of special sessions over the past 10 to 20 years has been $50,000, Raúl Burciaga, director of the Legislative Council Service, wrote in an email Tuesday.

Sen. Candelaria may be off Finance Committee

The move still requires a full vote of the Senate, which will happen Wednesday.

I keep trying to sign in to see the committee meeting on redistricting, and it keeps being adjourned.

So do they want ANY citizen input?

If the Indigenous managed to get it together, why can't the incumbent-friendly in-group realize that their map should be honored, along with the CDC map?

Fiddling by those in power is so undemocratic. We are watching.