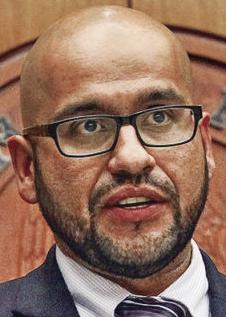 New Mexico lawmakers who favor using a multibillion-dollar state investment fund as a long-term source of revenue for early childhood programs believe they might have a shot in 2021 at passing a resolution allowing voters to make the decision.

Despite economic turmoil in the state from the coronavirus pandemic, Democratic lawmakers on a tax and revenue committee said Thursday the Land Grant Permanent Fund actually has grown during the year to about $20 billion from $19 billion a year ago.

That growth, combined with plans for austerity in other areas of state government and the pending departure of longtime budget hawk Sen. John Arthur Smith — a Deming Democrat ousted from his seat in the June primary election — is spurring optimism among supporters of a proposal that has failed in the state Senate for years.

“The three main opponents of this are not returning to the Legislature,” said state Rep. Moe Maestas, D-Albuquerque. “Those that do return … are much more confident in ourselves as New Mexicans to utilize this money in a prudent manner.”

The top concern for those who oppose using money from the endowment, largely fed by revenues from oil and gas extraction, to boost early childhood education has been that additional withdrawals could deplete it — and deprive future generations of a “rainy day fund.”

The amount of the fund distributed annually to public schools and other beneficiaries is around 5 percent, Maestas said.

Measures have stalled in Senate committees, never making it to the full Senate for a vote.

Maestas and several other supporters, such as Rep. Javier Martínez, D-Albuquerque, and State Land Commissioner Stephanie Garcia Richard, also a Democrat, have argued the amount distributed from the endowment each year should be higher than 5 percent. Maestas said it could be closer to 7.5 percent. In prior years, proposals have called for a 6 percent distribution.

Education experts have pointed out that early learning has a significant effect on children’s academic achievement in later years and career prospects. For a state that has been sued for not meeting a constitutional requirement to provide an adequate education for minority students and other at-risk children, the issue is particularly salient.

“Children of color in this state have really been left behind, and I don’t blame any political party or any individual,” Martínez told other members of the interim legislative Revenue Stabilization and Tax Policy Committee during the meeting Thursday. “I think it’s just been a failure as a state.

“And sadly because of the fact that … the federal government tied our hands behind our back when we became a state and that we have been unwilling to untie our hands, we are still dealing with a lot of these issues,” he added.

Maestas was referring to the fact that an amendment to the state constitution is required to change the amount of money withdrawn from the Land Grant Permanent Fund and how that money can be spent.

Martínez said he believes ensuring a long-term funding source for expanded early childhood education is one of the best ways lawmakers can fight generational social inequities.

Republicans likely will oppose the measure. But the GOP does not have control of either chamber.

The bigger battle for Maestas and Martínez could be convincing more moderate Democrats to support it.

State Sen. George Muñoz, D-Gallup, has in voted in committees in favor of a constitutional amendment to tap the endowment for early childhood education. But he’s also voted against it at times.

His concern, he said, is that the resources will not actually be distributed in an equitable way to kids in rural districts. His hometown of Gallup and surrounding McKinley County include many Hispanic and Native American children who often lag behind their white peers in educational achievement.

The state does not have any early childhood education programs in Gallup, Muñoz said, noting that kids have to go to Farmington or teachers from Farmington have to drive to Gallup.

“A person in Albuquerque can drive 10 minutes … and 10 minutes for us gets you five miles out of town. And there’s still 45 to go,” Muñoz said. “Tell me how you’re gonna provide for the kids in McKinley, Cibola and San Juan counties.”

The League of Women Voters of New Mexico supports the investment of significant funds to achieve the outcomes required by the Yazzie/Martinez educational insufficiency decision to support the students and families who are most vulnerable. In the Yazzie/Martinez “Decision and Order” filed with the District Court Clerk on July 20, 2018, the following suggestions were made (page 57):

5. pass a tax on all internet sales;

8. slow down or reverse the corporate income tax reductions;

We have $20 billion in the Permanent Fund. We are in a severe drought, and we need to get some rain from our rainy day fund. Meredith Machen, Education Chair

Big Oil could and should do a lot more for humanity, considering the catastrophic damage fossil fuel is causing globally ... I seriously doubt that any industry profits more from the Trump administration’s loosening of environmental protections than the U.S. fossil fuel industry, which greatly contributes to global warming thus stronger hurricanes and a drier, more fire-susceptible climate.

With the unprecedented U.S. Westcoast wildfires and off-the-chart poor-air advisories, I wonder how many fossil fuel industry CEOs and/or their young families may also be caught in harm’s way.

Assuming the CEOs are not sufficiently foolish to believe their descendants will somehow always evade the health repercussions related to their industry’s environmentally reckless decisions, I wonder whether the profit objective of a CEO’s job-description nature is somehow irresistible to him or her?

Does anyone else recall the allegorical fox stung by the instinct-abiding scorpion while ferrying it across the river, leaving both to drown?

Fund early childhood education from the funds created by the "austerity measures". Do not tap the land and per6fund

anything to get pork and kill the golden goose...