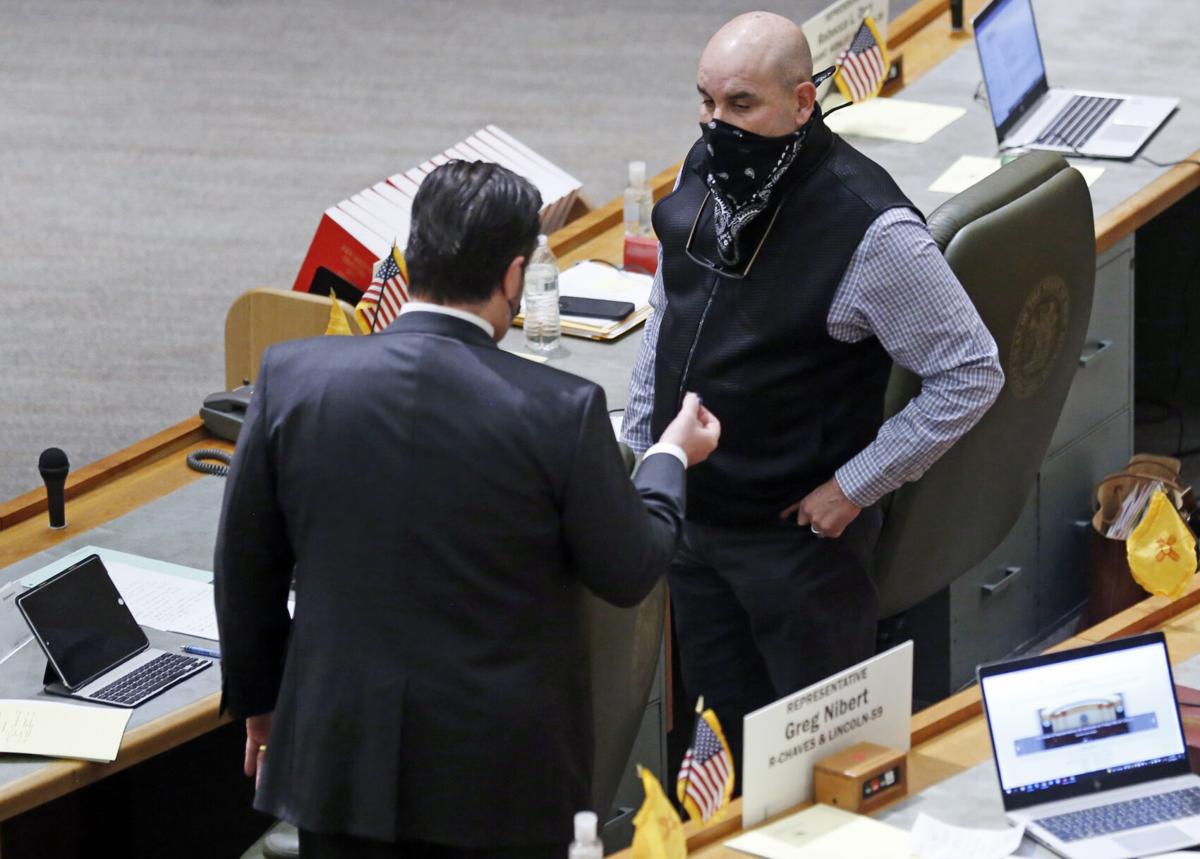 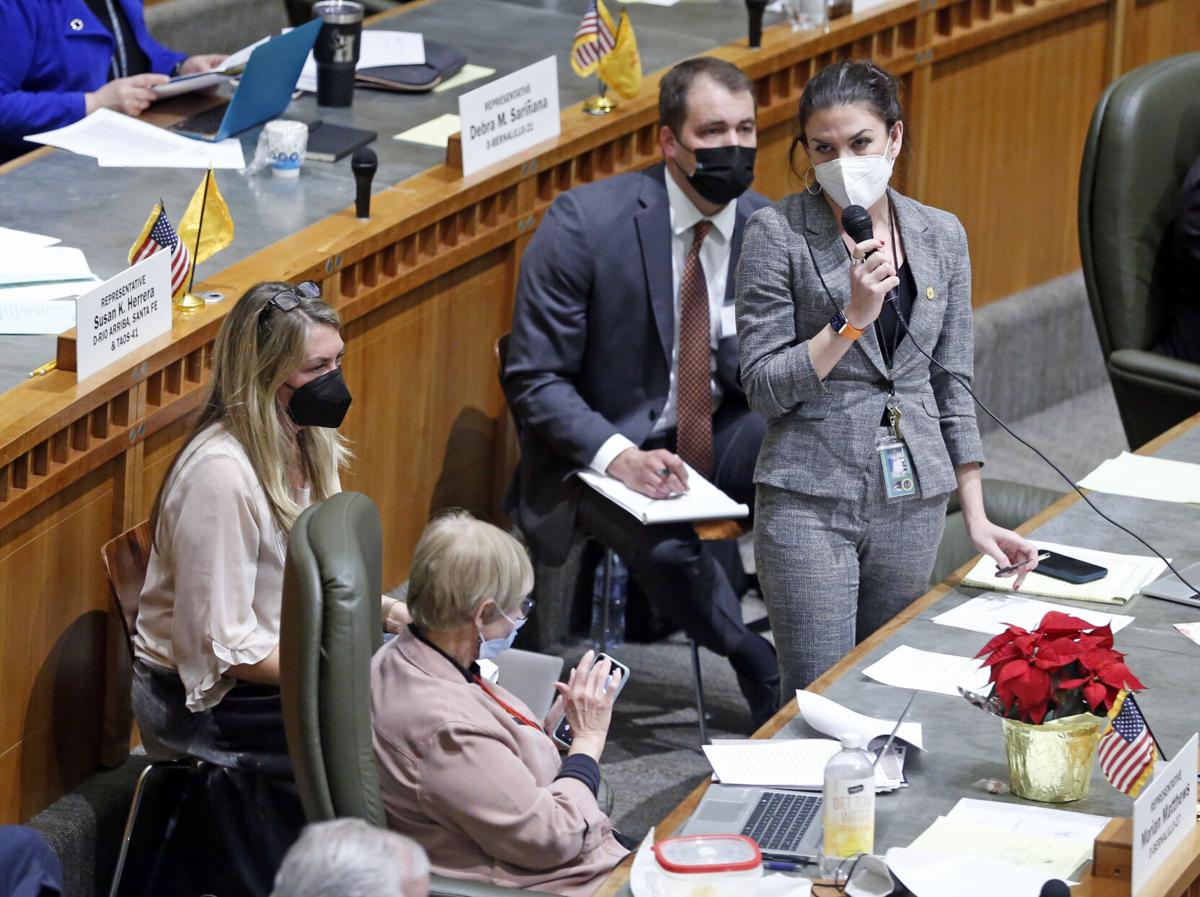 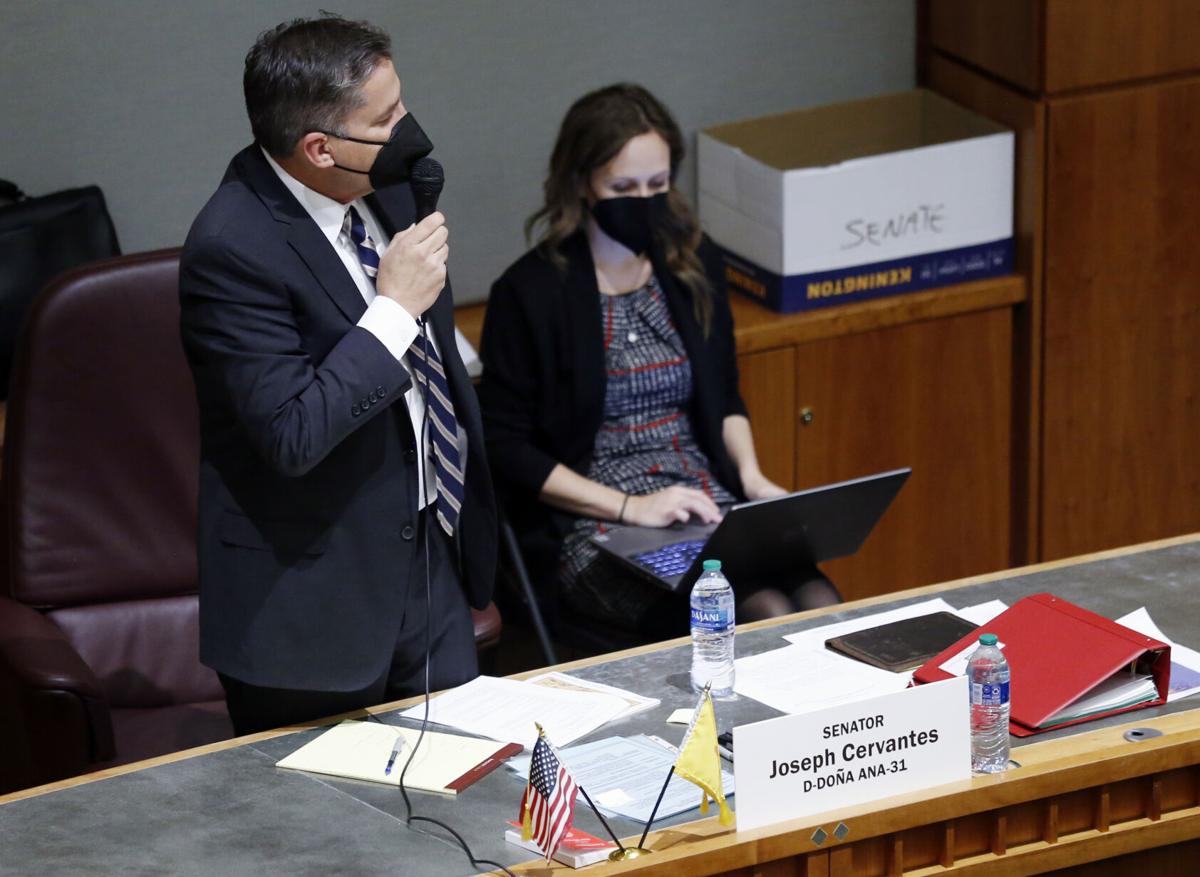 Sen. Joseph Cervantes, D-Las Cruces, speaks about a proposed congressional redistricting map Friday on the Senate floor. Cervantes said his map ‘recognizes and honors and values’ the work of the redistricting committee.

Sen. Joseph Cervantes, D-Las Cruces, speaks about a proposed congressional redistricting map Friday on the Senate floor. Cervantes said his map ‘recognizes and honors and values’ the work of the redistricting committee.

The House of Representatives approved a redistricting map that would push a veteran Republican lawmaker into new and heavily Democratic District 23 — putting her chances of winning her next election in question.

House Republicans who dislike the idea fought to win over Democrats in protecting that lawmaker, Rep. Jane Powdrell-Culbert, R-Corrales, who represents House District 44, by altering the map to add four precincts to that new territory.

That would have made both District 44 and neighboring District 23 — represented by Rep. Daymon Ely, D-Corrales, who is not running for reelection — majority Republican districts, said Rep. Rod Montoya, R-Farmington.

Republicans lost the battle by a vote of 43-23.

The failed Republican battle to save one seat highlights the minority party’s challenge in the House in pushing its own policies and programs.

Democrats outnumber Republicans in that chamber, 45-24. There is also one independent in the House. Gov. Michelle Lujan Grisham is a Democrat, and the Senate is also controlled by Democrats.

The Republicans’ actions also speak to the desire to hold on to known territory and constituents, as was evident when other representatives spoke of the changes affecting their districts with the passage of the legislation, known as House Bill 8.

In the proposed map, which next goes to the Senate for consideration, Rep. Dayan Hochman-Vigil, D-Albuquerque, would be paired with another incumbent, Rep. Bill Rehm, R-Albuquerque, which means they would run against each other in a mixed-party district in 2022.

“We can’t always get what we want,” Hochman-Vigil said. “Sometimes we have hard races in front of us, but we shouldn’t be looking at maps in a protectionistic manner.”

The back-and-forth debate, which lasted over three hours Friday evening, highlighted both parties’ fears about gerrymandering — mapmaking efforts that favor one party or the other.

Earlier this week, when the Legislature began a special session primarily focused on redistricting, House Republicans said Democrats were rigging the map to make Powdrell-Culbert vulnerable to a Democratic win, which would cost Republicans a valued seat.

During Friday’s debate, Rep. Daymon Ely, D-Corrales and sponsor of HB 8, said the proposed Republican substitute for the map, introduced by Rep. Jim Townsend, R-Artesia, was an example of gerrymandering in that it would bring more Republicans into her district on the new map.

Ely said the House map he introduced as HB 8 is a slight variation of one of three House redistricting maps proposed by the Citizens Redistricting Committee, which was charged with submitting three proposals for the state House and Senate, Congress and Public Education Commission.

Some Republicans questioned that, saying Democrats had considerably altered the map.

Republicans were not alone in opposing HB 8. Rep. Miguel García, D-Albuquerque, said the map, which includes 27 Hispanic-majority voting districts, did not do enough to protect or grow those districts.

Noting the map provides for six Native American-majority voting districts, he said, “We have moved the needle 1,000 degrees in this body in ensuring Native American power, political strength in New Mexico, is a must.

“But we’ve fallen short in doing the same for our Hispanic communities,” he said before joining Republicans in voting against the bill.

Powdrell-Culbert was not present for the debate.

I think that if New Mexico Republicans could convince their Republican friends in Texas, Arizona, Georgia, and Florida to do what they're wanting Democrats to do here, then things could change.

Not only would they be unable to, but they also wouldn't want to if they could.

Sorry, but what other states and their dominate parties do is not relevant to NM. We can't influence or even credibly critique other states, and pointing to another wrong does not make this right. We can and should focus on what is going on right here, right now. It will set things in stone for 10 years with no chance of appeal or improvements. Those of us who will be disenfranchised and diluted need to speak up, it will probably do no good, but we must try. My state rep district is an example of previous gerrymandering that resulted in disenfranchisement through dilution, I would not like to see more of that happen to other people.

Just take your response and apply it here, in this case, the Democrats are the dominant party. You can't influence or even credibly critique New Mexican Democrats for the same thing you won't critique Republicans for in other states.

Not at all, I have not researched and do not understand what the GOP is doing in all the other states, or what the Ds are doing either. I see headlines and assertions, all partisan of course, that is not facts, thus I cannot credibly critique those, I can NM's. Simple.

Dottie, Democrats have wailed endlessly about Republican gerrymandering in other States, so the fact that they are doing exactly that here in New Mexico is the double standard....get it?

CORRECTION Twenty seven Hispanic districts to six Native American districts is about proportional to their respective population percentages in the state.

Cry me a river, Rep Garcia. About time the state allowed Native Americans districts that would give them better representation. Twenty-seven Hispanic districts is about proportional to the percentage of Native Americans to Hispanics in this state.

Another partisan, racist gerrymandering map. The sole intent is to deny a Black woman conservative a voice at the table, for obvious reasons, disgusting.

It's pretty silly for a right-winger to try and play the race card. Democrats may want that Republican seat but they certainly aren't acting on the basis of race.

Well, except hyper-partisan conservatives do love them those Clarence Thomases. Then they can claim all kinds of race-based junk, as in claiming the conservative Black woman is disliked by Dems because of her race, which is contrary to the record.

It's not just her race, but her political views too. But remember, the left wing thinks they own a monolithic coalition of minorities that are reliable voters and allies. When any minority has the temerity to reject their left wing agendas it is doubly bad for them. And like Justice Thomas, or any of the many minority heads of government that are conservatives, they are very motivated to discredit ( call them Uncle Toms, etc.) and remove them ASAP. That is a fact.

Why didn't you just come out and say "Aunt Jemima" Emily? You know you wanted to. You libs can't STAND black conservatives. It totally spoils your belief that you "own" the minorites.

Ms. Koyama. Please don't attempt to speak for me, thank you.