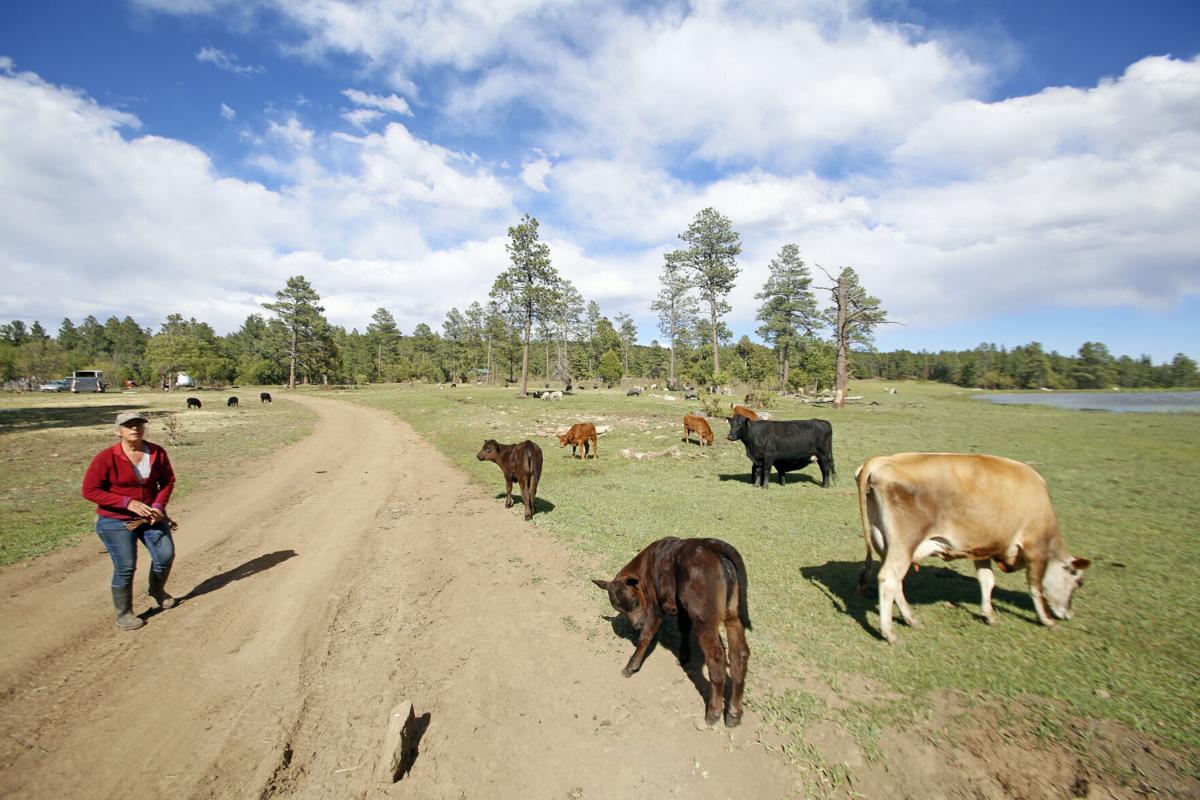 Carla Gomez, owner of Los Vallecitos, a beef and lamb ranch in Mora County is shown at her ranch in 2020. Gomez said Tuesday, ‘Here in Mora, a lot of people who have had cattle in the past don’t anymore because of this continual drought cycle.’ 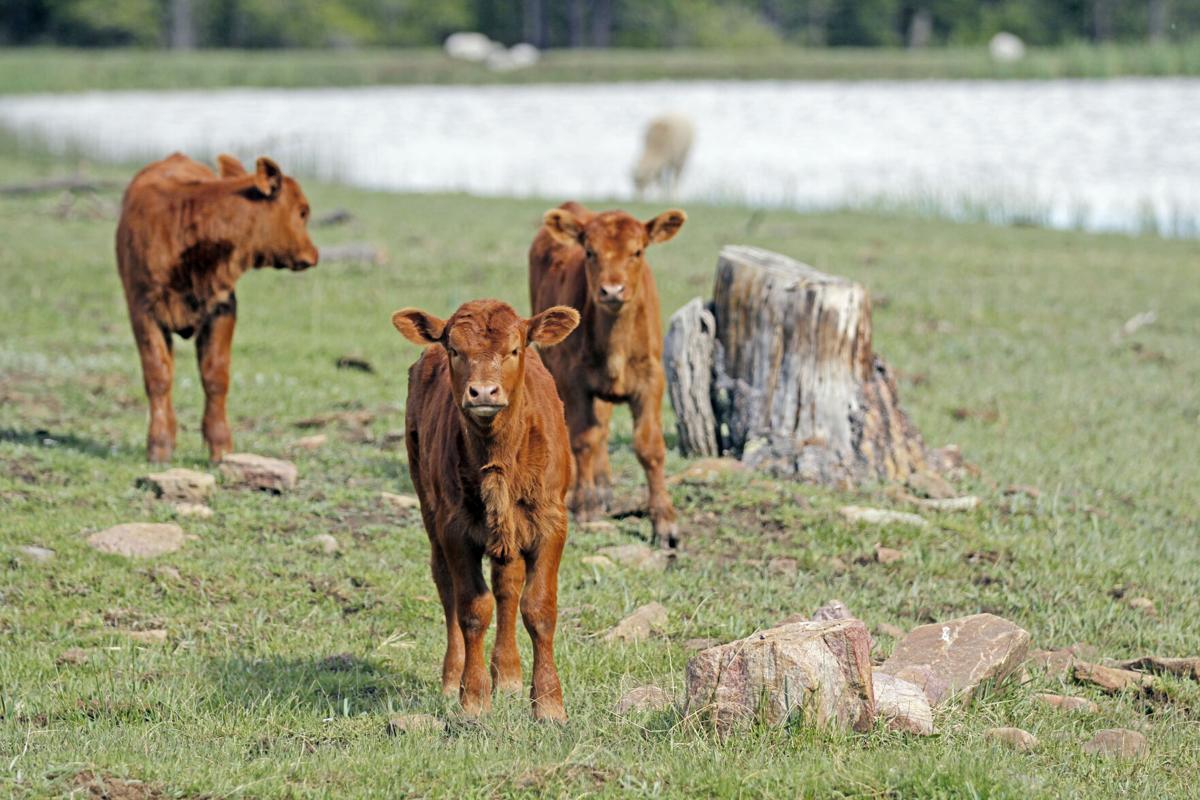 Economically speaking, the cattle industry is a meaty, if not mighty, force. A 2019 report, from the environmental publication Sustainability, said its role in the state economy is 'substantial.'

State Sen. Pat Woods saw a lot of it over this past year — cows culled from a herd and sent to the slaughterhouse because their owners couldn’t afford to feed them anymore.

“It was awfully dry,” said the longtime rancher and Republican lawmaker from Broadview, a ranching community about 30 miles north of Clovis. “They were forecasting it would never rain again and it was going to be such a tough year that a lot of ranchers didn’t want to put their money into the cow.”

The drought strikes again — and its effects are having a significant impact on the state’s cattle ranching industry, according to a new report from the New Mexico State University Department of Animal and Range Sciences.

The report, which was presented to Woods and other members of the interim Water and Natural Resources Committee on Tuesday, laid out in stark terms how drought conditions are hurting ranchers.

Some climate experts have called the drought enveloping the southwestern part of the country one of the worst in centuries. As of last Thursday, when the last U.S. Drought Monitor report for New Mexico was updated, about two-thirds of the state was experiencing moderate to extreme drought conditions. And that was after a healthy monsoon season in many areas.

That in turn leads to extra costs when it comes to restocking herds that have been thinned out.

Calling the situation “the perfect storm of drought and pandemic,” Loren Patterson, president-elect of the New Mexico Cattle Growers Association, said the industry is reeling under “all of the above” pointed out in the study.

“It has a pretty big impact on us economically,” he said by phone following the presentation of the report. “It raises our cost of production. Not only do we have to reduce cow numbers, we have to supplement more for the cows we keep.”

Economically speaking, the cattle industry is a meaty, if not mighty, force. A 2019 report, from the environmental publication Sustainability, said its role in the state economy is “substantial.” Using 2012 data, it said about 44 percent of revenue from the state’s agricultural industry is derived from cattle.

Patterson said while those who work in agriculture are accustomed to dealing with problems brought on by longterm drought, “it’s always a little tougher than you prepare for.”

Ultimately, consumers will feel the brunt of the impacts at meat markets, grocery stores and restaurants, Patterson said.

The U.S. Bureau of Labor Statistics’ Consumer Price Index reports the price of beef and veal went up 6.5 percent between July 2020 and July 2021 — though it does not provide an explanation for the increase.

And there may be less beef to go around. Patterson said ranchers who have thinned herds are now trying to restock them by keeping female cows so they birth calves. Those cows are not headed into the food supply chain anytime soon. That can affect the beef supply for up to three years, he said.

Restocking is expensive, the report says.

Rep. Candy Spence Ezzell, R-Roswell, who is a rancher and a member of the interim committee, said she has experienced that cost firsthand — noting in an interview she had to sell off more than 100 of her herd at the end of 2019 because of the effects drought had on her operation.

Now, trying to restock, she finds cows once worth $700 going for nearly twice that price as demand outpaces supply.

“That’s a scarcity of a commodity that we as ranchers need,” Ezzell said.

Carla Gomez, a small cattle rancher in Mora County, said the drought has had a “devastating” impact on fellow ranchers in her area, despite a season of really good rainfall.

“Here in Mora, a lot of people who have had cattle in the past don’t anymore because of this continual drought cycle,” she said. “People sell their cattle … some people build the herd back up and some don’t.”

The report offers a number of recommendations for easing the drought’s effects, such as weaning and selling offspring early to reduce grazing fees; providing supplements to replace milk and grass for feed purposes; culling both old and young “low productivity” animals out of herds; keeping animals in a pen to feed them stored-up food products.

Some of these options are expensive, the report noted.

While Patterson said these options will “absolutely” help, selling off livestock or sending them to the slaughterhouse is “economically devastating” for cattle ranchers.

And, he said, it will cost the state and local counties in tax revenue because cattle ranchers “pay taxes on every head of livestock, so obviously the counties and state will realize less taxes.”

I'd have more sympathy if cattle weren't pummeling public land that their not supposed to be on. Seriously, let's just end ranching. I love a good burger or steak but not enough to let it destroy our environment. Id even be fine with paying the ranchers into early retirement. A golden parachute would still cost less than the subsidies and environmental degradation.

Maybe it's about time we reevaluate public policy that has propped up these socialist ranching operations for the past century. Given the drought, cattle focused on the scarce water resources and grasses, pushing out the wildlife and further destroying the riparian areas alongside the trucks, atvs, and fences found all across the American West. It would be nice to drink our natural waters without fear of parasites introduced by cattle and to rid our pastures and open forest land of cow feces. Removing the cattle from our public lands would increase the value of cattle on private ranches, helping those struggling increase their pricing and maximize their operations. Seems like a win for all involved (well, except those who run cattle for below market value on our public lands with little or no oversight).

Well said Kit. My property abuts State Trust Land that has a grazing permit attached. There is very little grass, lots of cholla and severe erosion but the cattle keep tearing up what little is left. Time to rest the land. I say give it at least 100 years.