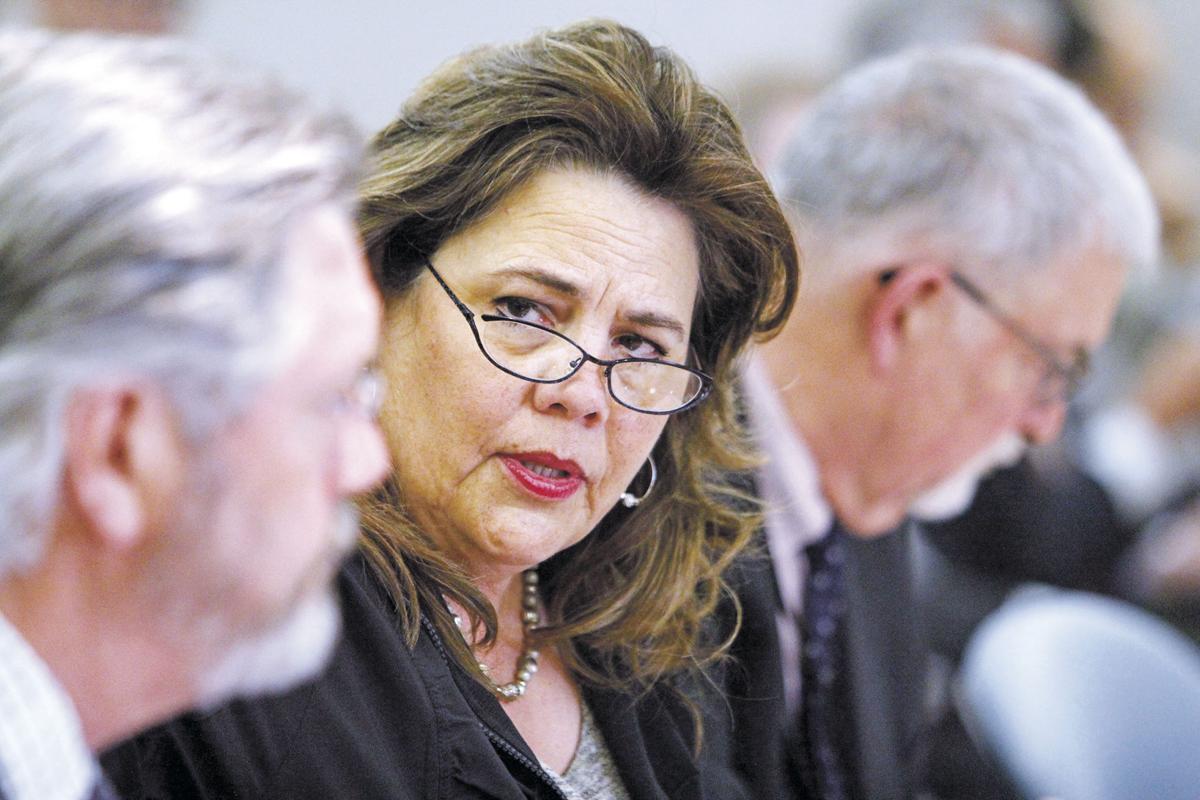 Rep. Patty Lundstrom, D-Gallup, wants to take a closer look at the tax breaks the state allows as the coronavirus pandemic threatens to hammer its budget. 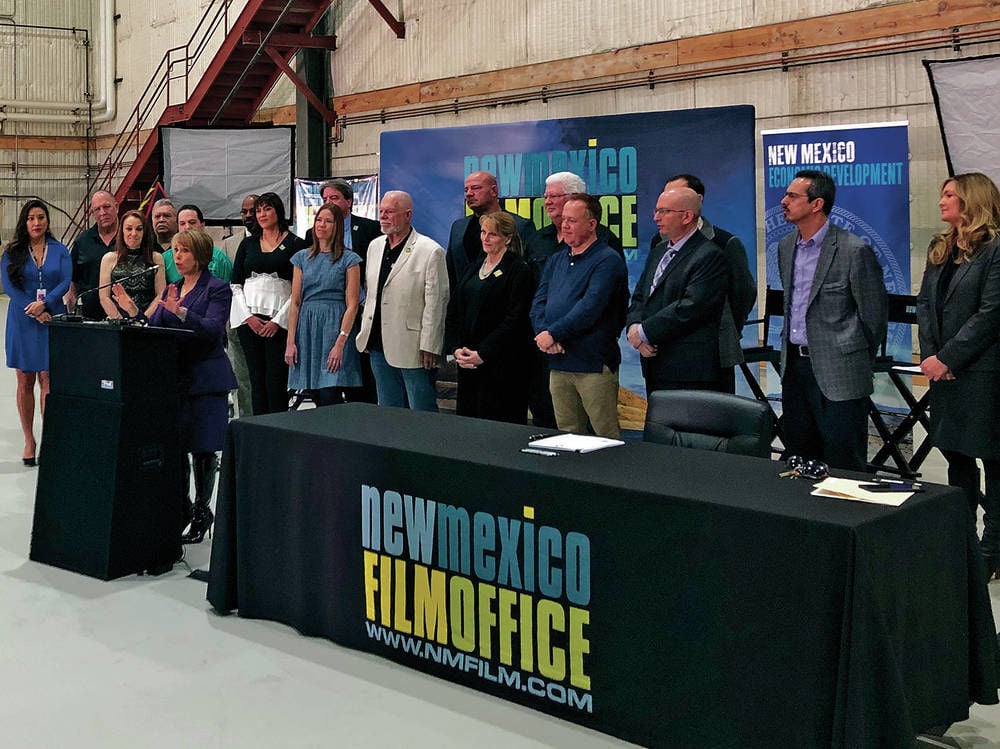 Gov. Michelle Lujan Grisham speaks in March 2019 at Albuquerque Studios before signing a bill to expand tax credits for the film industry. Those credits, among others, may be on the chopping block in the coming legislative session after the pandemic’s hit to the state budget.

Rep. Patty Lundstrom, D-Gallup, wants to take a closer look at the tax breaks the state allows as the coronavirus pandemic threatens to hammer its budget.

Gov. Michelle Lujan Grisham speaks in March 2019 at Albuquerque Studios before signing a bill to expand tax credits for the film industry. Those credits, among others, may be on the chopping block in the coming legislative session after the pandemic’s hit to the state budget.

House Appropriations and Finance Chairwoman Patricia Lundstrom says she isn’t targeting specific credits or tax breaks for the chopping block as the Legislature prepares for the 2021 session, but she also notes she’s not ruling anything out — including businesses’ ability to stack multiple tax credits and even tax exemptions for necessities such as groceries, medical expenses and prescription drugs.

“Does it make sense at the level that it’s still been set up?” Lundstrom, D-Gallup, said late last week. “It’s just amazing to me that we have absolutely no control over that. If we needed money, say, to help plug holes in education, we’re not going to have it because we’re paying out all these tax expenditures. And I don’t think we’re taking a hard enough look at it when these things are going through.”

Lundstrom hinted at the problem during a daylong Legislative Finance Committee meeting last week, in which economists detailed the list of credits, exemptions and deductions and told lawmakers that despite their hefty price tag, New Mexico has little information on whether some tax incentives benefit the state.

As the state grapples with the economic effects of COVID-19, allowing multiple tax credits for businesses may get a close look as legislators work on what could be an exceptionally tight budget.

Others include film credits, which totaled about $83 million for fiscal year 2021, plus a $51.5 million tax break for working families, capital gains tax deductions worth $39.4 million and $36.8 million in tax credits for companies that create high-wage jobs, according to the Legislative Finance Committee.

The film industry’s tax credits, which have been a sore point for Republicans and some Democrats from rural parts of the state for years, may once again become a flashpoint in the tax debate. Lundstrom said nothing will be spared from the conversation.

“I’m very skeptical anymore if we don’t have a sunset on something,” Lundstrom said. “The economy shifts and changes too much for us to not be aware that we may not have to change something.”

Lundstrom said she expects substantial debate on whether film credits are really worth the cost to the state.

Film production has led to about $2.4 billion spent in New Mexico over the past seven years, according to a presentation by Jon Clark, deputy Cabinet secretary for the state Economic Development Department, to the Legislative Finance Committee from

Netflix has committed to filming for 10 years in New Mexico, a promise that included the purchase of a studio in Albuquerque and 1,000 jobs in the film and television industry.

Overall, the industry paid close to $20 million in salaries for New Mexico residents, including crews, cast and set development.

“I hope that lawmakers would recognize that [cutting film incentives] would be really problematic for two reasons: This is a significant industry that creates over 9,000 jobs,” Clark said in a telephone interview. “Doing something that could potentially devastate the industry at a time that we desperately need jobs would be really detrimental to regaining our economic growth and providing people with the security and income that people need to pull out of this economic crisis.”

Lundstrom’s comments also sent shockwaves of concern through the business community and others who advocate for progressive policies meant to help the working class and poor families.

“While they’re considering exemptions and deductions, they should also be considering some of the poor tax policy decisions the Legislature has made in the past,” said James Jimenez, executive director of New Mexico Voices for Children, referring to cuts in personal and corporate income taxes more than a decade ago.

Rob Black, president and CEO of the New Mexico Association of Commerce and Industry, said incentives help drive development crucial to diversifying the state’s economy so its public budget isn’t decimated by the vicissitudes of the oil and gas industry.

He said he’s concerned that in dealing with the pandemic’s effects on the budget, the Legislature may try to “raise significant revenue on the backs of the business community, which has already borne the financial cost of this pandemic.”

That would make economic recovery all the more difficult, Black said.

Bill Lee, president and CEO of the Gallup-McKinley County Chamber of Commerce, agreed that cutting business incentives likely would hurt the economy.

Lee has advocated for an approach that would offer New Mexico small businesses the kinds of credits industries like film receive.

“How can we actually help small businesses find better footing and even give them some tax breaks that’ll help them keep their doors open?” he said.

Although detailed reporting and analysis of tax incentives can be costly, lawmakers and budget executives with the state often have little information about how tax incentives, deductions and exemptions help the state, Anklam said.

Though companies report some data to the state, often missing from annual reports are the number of jobs created by specific incentives and other details that could help lawmakers make a more informed decision on whether to keep them.

Sadly, politicians always underestimate the mobility of capital. Perhaps those big old numbers are just too complex for them!

NM has invested over $250 million in to the Spaceport. A total loss...

its the good old pay to play and that's how politicians become wealthy on their salaries..

the socialist at work driving industries out of the state , so welcome to the new state of california

It should be the reality of the legislature as to how these film credits benefit the general public not just businesses!! Because the money that is collected to give these credits comes from the pockets of the majority of the public!! So you are creating this welfare for this industry at the expense of the public!! Had to repeat myself so that it would be clearly understood to those that make the decisions that go contrary to public benefit!! How shameful it is to hear the hyperbole of the industry when it fact it is simply self-interest!! and an avenue that is available to the state for additional income is if and when recreational pot is passed is that the state be involved in the sale and not leave the profits on the table for private institutions!!

"if we needed money.....we're not going to have it because we're paying out all these tax expenditures" . Spoken like a true tax and spend Democrat. Government only has money to spend because they collect it from individuals and businesses in the first place! Government does not EARN any money. EVER.

The film tax credits are just a giveaway to a rich, profitable industry to try and keep them here. That industry provides less benefits to our economy than we pay out in tax giveaways,, and are thus a waste of our money.

Just like Biden they say there giving you a tax break when really it will be a tax increase.