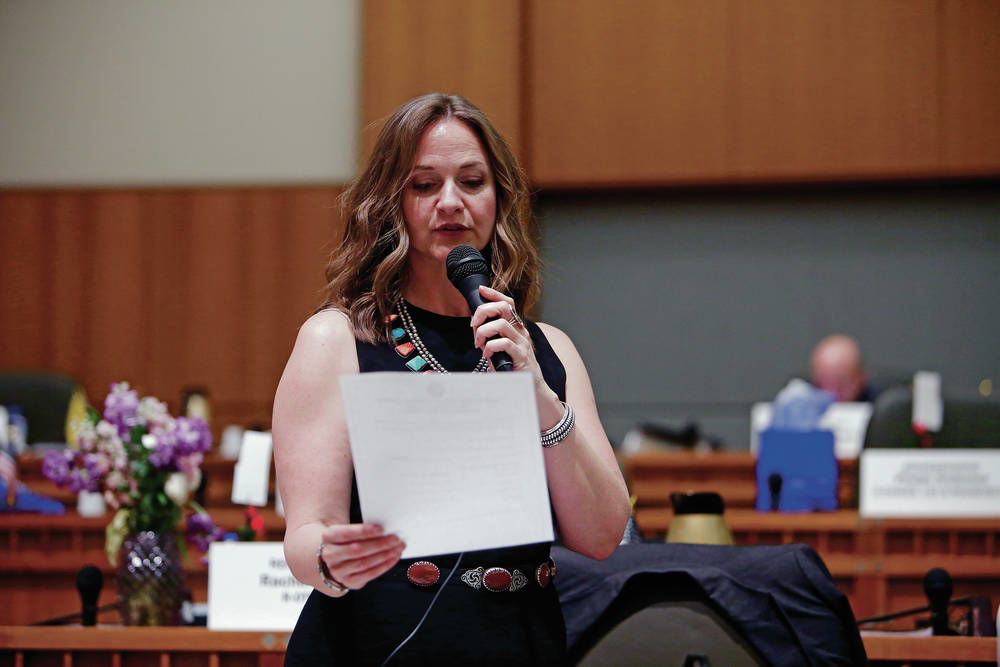 State Rep. Rebecca Dow, R-Truth or Consequences, speaks on the House floor Thursday. With far fewer Republicans in the House this year and little chance of getting measures passed on their own, Dow says, ‘I’m encouraging folks on those things they feel are really important to call the Democrat representatives and ask them to vote according to New Mexico constituents, not just a party platform.’ Luis Sánchez Saturno/The New Mexican 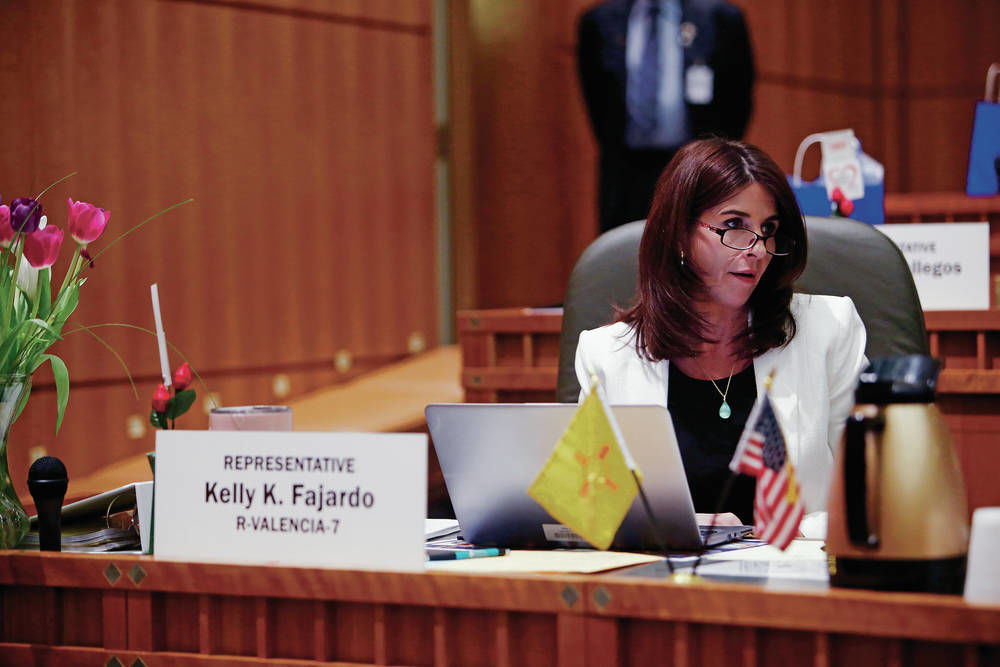 State Rep. Kelly K. Fajardo, R-Los Lunas, present Thursday on the House floor, said she feels Republicans’ voices aren’t being heard this year in the Legislature. Following a major defeat at the polls in November, she said, ‘It just feels like we don’t matter.’ Luis Sánchez Saturno/The New Mexican 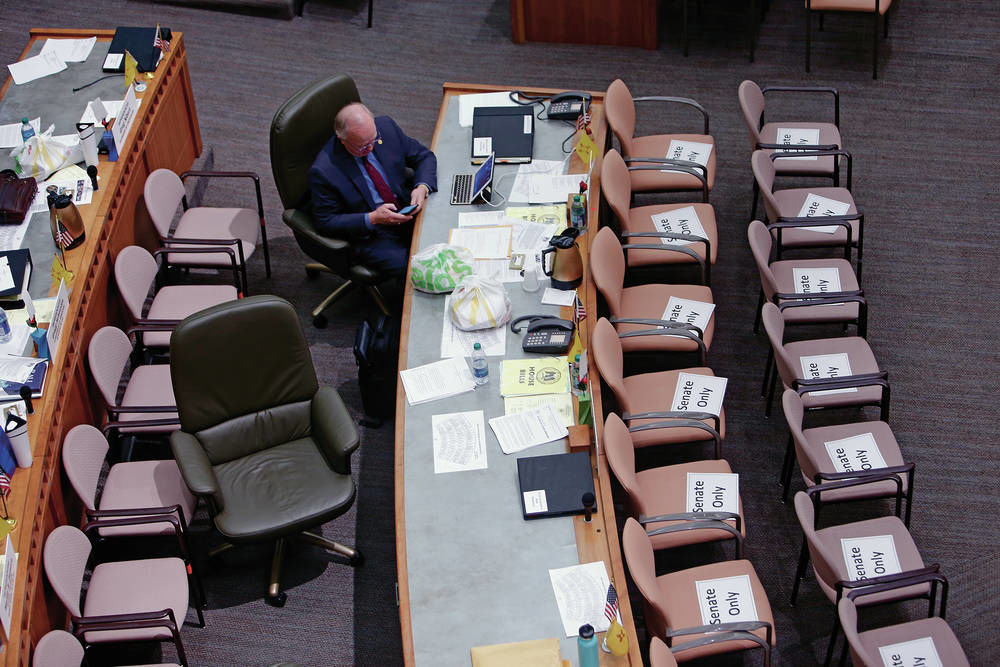 State Rep. Jim Townsend, R-Artesia, sitting Friday on the House floor, says it’s frustrating to be a Republican in the House this year and accuses Democrats of overreaching and being fiscally irresponsible. Luis Sánchez Saturno/The New Mexican 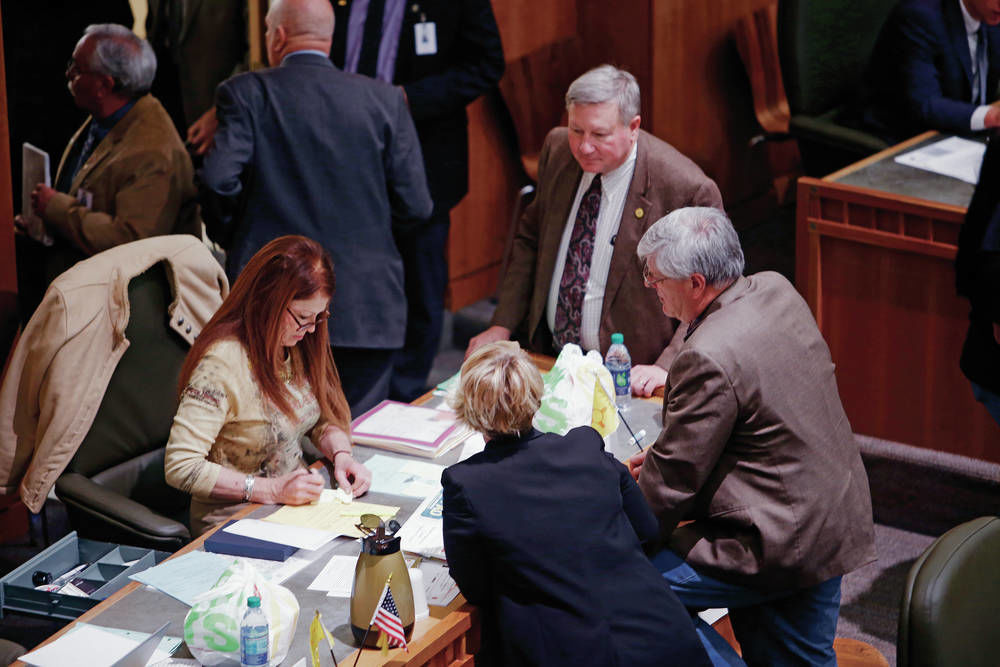 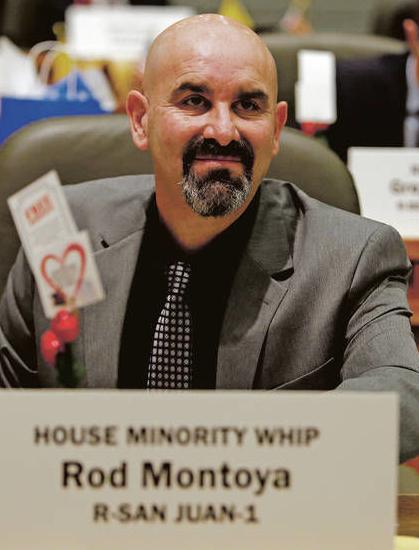 State Rep. Rebecca Dow, R-Truth or Consequences, speaks on the House floor Thursday. With far fewer Republicans in the House this year and little chance of getting measures passed on their own, Dow says, ‘I’m encouraging folks on those things they feel are really important to call the Democrat representatives and ask them to vote according to New Mexico constituents, not just a party platform.’ Luis Sánchez Saturno/The New Mexican

State Rep. Kelly K. Fajardo, R-Los Lunas, present Thursday on the House floor, said she feels Republicans’ voices aren’t being heard this year in the Legislature. Following a major defeat at the polls in November, she said, ‘It just feels like we don’t matter.’ Luis Sánchez Saturno/The New Mexican

State Rep. Jim Townsend, R-Artesia, sitting Friday on the House floor, says it’s frustrating to be a Republican in the House this year and accuses Democrats of overreaching and being fiscally irresponsible. Luis Sánchez Saturno/The New Mexican

After a midterm election in which Democrats wrested back control of the Governor’s Office and expanded their majority in the state House of Representatives, Kelly Fajardo feels almost invisible at the Roundhouse this year.

Fajardo, you see, is a Republican representative in a Democrat-dominated House, where members of the GOP are now outnumbered by the largest margin in two decades.

“Our job is to create good policy, and when you’re going, ‘I don’t need you. I don’t need to listen to you,’ that creates a problem,” she said. “I’m feeling that we’re not being listened to.”

Other Republicans say New Mexico Democrats, emboldened by big gains in November, are pushing through contentious and liberal-leaning legislation, including bills on abortion and guns, and completely ignoring their GOP counterparts.

The frustration boiled over late Friday night as Republicans accused Democrats of breaking House rules to stifle debate and ram through a bill that would make it a crime to sell virtually any firearm in New Mexico without a background check. A vast majority of the state’s sheriffs oppose the bill, saying it would be nearly impossible to enforce, and Republicans view the bill as an assault on the Second Amendment.

“You all clearly have the majority you want, and all we get is three hours of debate,” Rep. Jason Harper, R-Rio Rancho, told his Democratic colleagues.

In an interview earlier in the day, Harper said he believes the best legislation is “when left and right come to the middle.”

“But we’re in a situation now where the majority doesn’t even have to talk to us and get our opinion,” he said. “There are still some good folks, some of my good friends on the other side of the aisle, that do want to be bipartisan and try to work together with us. But this new makeup makes it so that many times we’re irrelevant.”

Worse for Republicans, they have a thin bench heading into the 2020 presidential year, and they’re grappling with the likelihood that President Donald Trump, who is unpopular in New Mexico, will seek re-election. In New Mexico, Democratic turnout is typically larger in years of a presidential race.

Steve Pearce, a former congressman who ran unsuccessfully for governor last year, said his message to Republicans as chairman of the state Republican Party is to keep their chins up and continue to express their views.

“It’s the same thing our folks did in the Revolution,” he said. “George Washington had to keep the hope up when nobody else had hope. It’s what we do, and it’s what minorities are supposed to do.”

As party chairman, Pearce likened himself to a commanding general “who has to find the resources and keep the heart of the people up.”

“They may have beat me in the election but they didn’t defeat me,” he said. “As leadership, I have to keep the mindset … that yes, we got beat. But we didn’t get defeated. You can take everything from us, but you can’t take our voice from us.”

Pearce said the only way Republicans will bounce back in 2020 is to not get discouraged and “keep your message stable and strong.” He said he also believes Democrats will hurt themselves in the long run by pushing such a progressive agenda that more conservative and moderate Democrats don’t support.

“Suddenly, the voters can react like this,” Pearce said, snapping his fingers.

Democrats know what it’s like to be in the minority.

But two years later, they won it back. And last year, when Democrats won control of every branch of New Mexico government for the first time in nine years, the Democratic majority in the House swelled from 38-32 to 46-24.

“We just had a big debate removing the felony abortion statute from the books,” he said. “The Republicans actually had a majority of the input on the floor debate on that bill when they represent a little more than a third of the House. They got almost 53 percent of the time of the debate. I thought that was important, so they did feel like they were being listened to and heard.”

Still, Egolf acknowledged that “there’s definitely a big change” in the House. He said New Mexico voters “spoke very clearly to give a mandate” to Gov. Michelle Lujan Grisham and House Democrats in November.

“Our win was substantial, and we feel that with the limited 60-day session, that gives us 60 days to implement an agenda of change that we’ve been waiting on for eight years,” he said. “Our majority is the largest in the House since ’95. It didn’t happen because of anything other than the voters’ will was expressed very clearly.”

“It’s frustrating being a Republican this year,” he said. “We have lost our fiscal responsible posture to budgeting, and we’re just spending wildly.”

Like Pearce, Townsend also believes Democrats will regret some of their votes, such as repealing the decades-old law that makes it a fourth-degree felony to perform an abortion in New Mexico.

“I am convinced that when the pendulum swings one way, it causes a reaction,” Townsend said. “Going forward in next election cycles, it won’t be what you tell me you support. I’ll be able to show you what they supported.”

“We want to get results to deliver to the people that gave us the mandate to govern and the mandate for change,” he said. “But as we do it, we are seeking every opportunity to get input and to take good ideas, regardless of party, and put them into law.”

Egolf said Democrats “extend our hand on every issue” and ask Republicans for their input and support. He said what Republicans call overreach, the governor and Democrats in the Legislature “call delivering positive change for New Mexico.”

“Instead of being constructive, they’re being critical,” he said. “If they want to be simply a party that says no and criticizes, that’s their prerogative. But I think if there’s anyone who should be concerned about the next election, it should be the party in the House that’s not providing a positive agenda for the future of New Mexico.”

In the state Senate, Democrats and Republicans are less confrontational.

Currently, there are 26 Democrats and 16 Republicans in the Senate. Unlike state representatives, who run for office every two years, state senators run every four. Their elections are held when other state offices, such as governor and attorney general, aren’t up for election.

“The Democrats have had the numbers all 11 years I’ve been in this chamber, but that hasn’t really changed the dynamic as far as I’m concerned,” said Senate Majority Leader Peter Wirth, D-Santa Fe.

“We don’t have the same kind of blowups that often happen on the other side, and a lot of that is out of respect that both sides have,” Wirth added. “They know where the votes are at the end of the day, so it’s how you handle all that, and that’s what sets the tone and allows us to function as a very collaborative chamber.”

In the House, Republicans also know where the votes are. The numbers are so stacked against them they know they don’t have a shot.

“The Republican Party does not have the votes to get an amendment, a substitute or to kill a bill, and so I’m encouraging folks on those things they feel are really important to call the Democrat representatives and ask them to vote according to New Mexico constituents, not just a party platform,” said Rep. Rebecca Dow, R-Truth or Consequences. “What am I supposed to do?”

But being in the minority doesn’t necessarily feel strange for Dow.

“I’ve never been a Republican in the majority,” she said.

Harper, who is serving his fourth term, said being in the minority can be a struggle.

“Going back now to being in the smallest minority we’ve had since like 2008, it’s challenging,” he said. “We don’t have the Republican governor as a backstop for bad bills.”

Still, Harper said he’s optimistic, so far anyway, that Lujan Grisham is “willing to talk with everyone and listen.”

“The previous governor and her administration did not communicate very well with the Legislature, and there was often friction with her, even with folks in the same party,” he said.

“Many times, we would pass bills not knowing that she had objections to content, and of course we would’ve worked with her on that if had we known,” Harper added. “This governor — I don’t know if it’s the honeymoon period — but this governor has been very responsive to talking to all of us and working with us. That’s a nice change.”