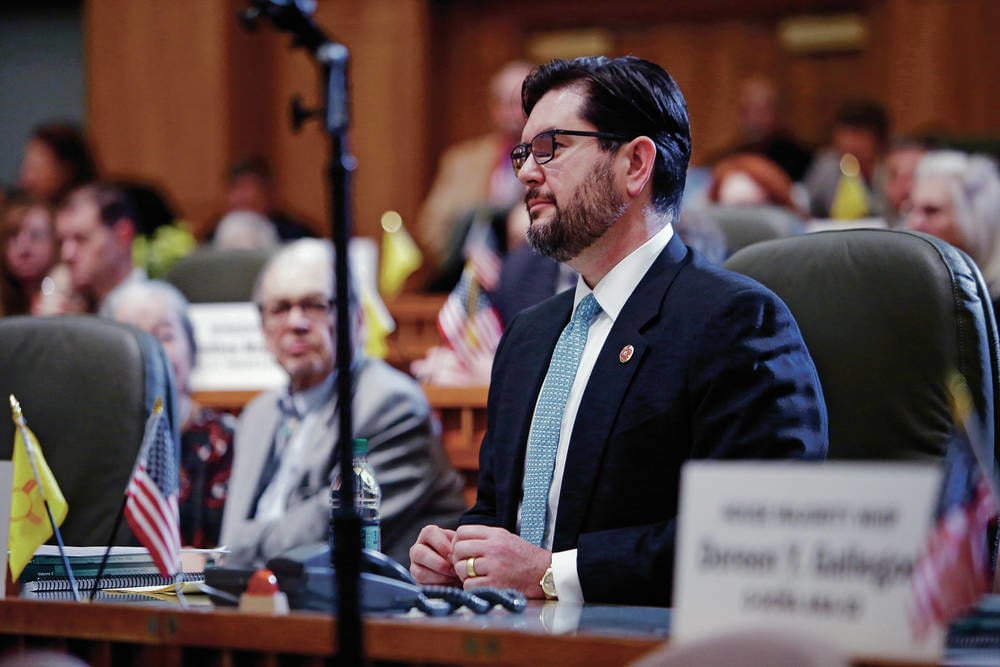 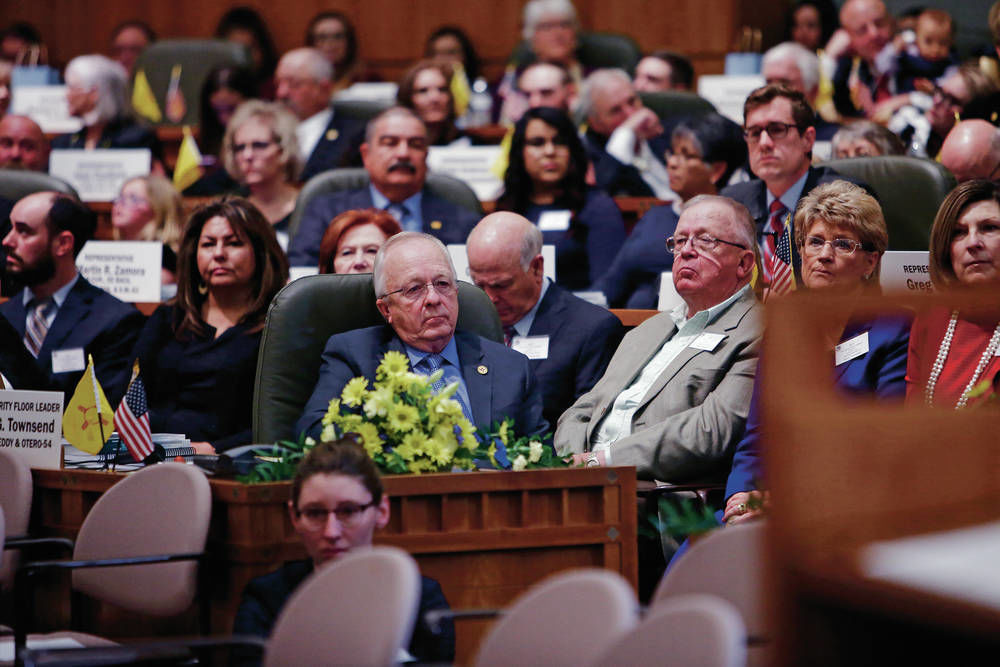 Rep. James Townsend, R-Artesia, is the House minority leader. ‘If you want good legislation, it requires more vetting than that,’ he said of Democrats putting bills on the fast track. Luis Sánchez Saturno/New Mexican file photo 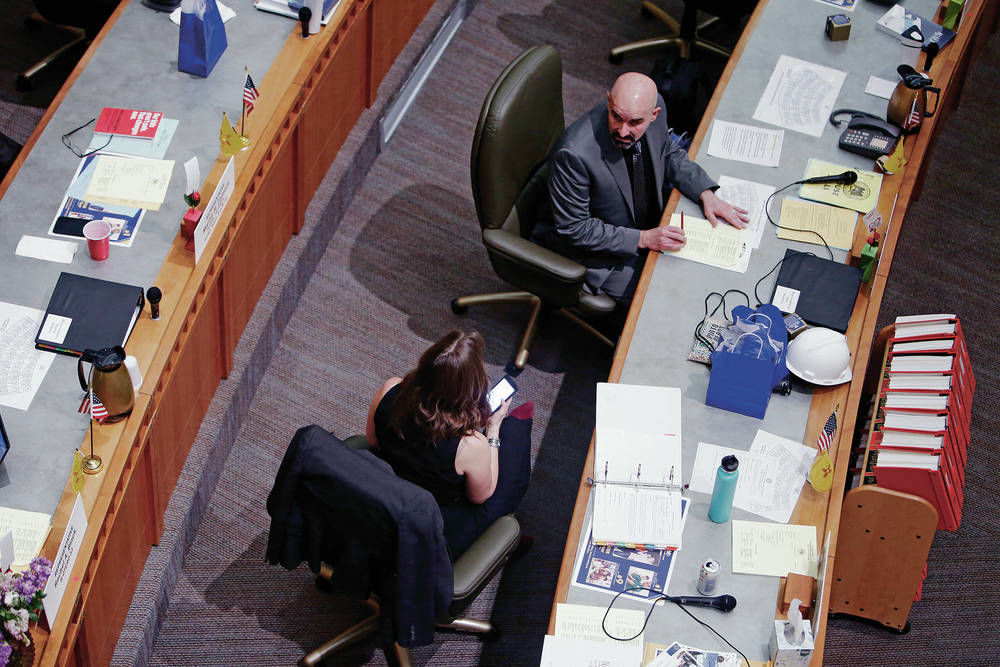 Rep. James Townsend, R-Artesia, is the House minority leader. ‘If you want good legislation, it requires more vetting than that,’ he said of Democrats putting bills on the fast track. Luis Sánchez Saturno/New Mexican file photo

Brian Egolf, speaker of the Democrat-controlled state House of Representatives, says the body is moving legislation faster than ever, clearing the way for reform of every level of state government.

Welcome to the halfway point of this year’s 60-day legislative session. Proceedings in the House often are angry and combative, as outnumbered Republicans bristle at being ignored or steamrolled.

If legislators felt like they were in a holding pattern last year, unsure both financially and politically how far their policies could go, the Capitol is imbued with a very different energy this winter.

Part of the quicker pace is having a new governor — a Democrat to go with Democratic majorities in both chambers of the Legislature. Part of it is having a budget surplus. But much of it, Alcon said, is having 19 new House members, mostly Democrats who have embraced Egolf’s rapid clip.

Fast-tracking of bills began even before this year’s session. Democrats leading the House of Representatives and Senate agreed to launch a “rocket docket” of bills that, in previous years, won unanimous or near-unanimous support from lawmakers of both parties but died because of inaction or vetoes when they landed on then-Gov. Susana Martinez’s desk.

Martinez’s successor, Gov. Michelle Lujan Grisham, made a display of signing 42 of those bills into law just last week. Lujan Grisham said it was proof that gridlock no longer bogs down state government.

“It’s smart,” Egolf said of the speed with which lawmakers are moving legislation forward.

He said Republican lawmakers have told him they support the faster style, even if party leaders do not.

Townsend voted for some bills on the rocket docket. But he said that, in many cases, bills that might have been reviewed by two or three committees are being heard by just one before going to a vote of the full 70-member House.

This fast-forward process might not serve the state well, Townsend said.

“If you want good legislation, it requires more vetting than that,” he said. The methodical process of making laws is in danger when legislators rush bills “just to get their way,” Townsend said.

Just the day before, Rep. Kelly Fajardo, R-Belen, said too many bills were being approved by legislative committees without the details being decided.

The fast track isn’t just in place in committee hearings.

Friday night, during a lengthy and contentious House floor debate on a measure to implement background checks for nearly anyone buying or selling a gun, Townsend and other Republicans accused Egolf of overstepping his authority when he called an abrupt end to the debate about 30 minutes before the traditional three-hour limit.

Egolf said Tuesday the Republicans were pulling a “stunt” Friday when Townsend requested a “call of the House,” a maneuver requiring all members, except for those formally excused in advance, to be at their desk for debate and votes.

House aides go so far as to lock the doors to force lawmakers to stay in the House chamber.

One member missing without permission was Rep. David Gallegos, R-Eunice. When he did not return after 15 minutes or so, Majority Leader Sheryl Williams Stapleton, D-Albuquerque, asked Egolf to excuse Gallegos so debate could continue.

Egolf agreed. This led House Republicans to demand a roll call vote on the move, which Democrats easily won. They control the chamber 46-24.

Townsend had the floor at the time, but Egolf ignored him and the bill requiring background checks in most firearms transactions went to a vote. It passed 45-21.

Townsend and other Republicans then confronted Egolf, but he decided to continue the floor session, rather than let one absent Republican stop the night’s work.

Egolf said Republicans also have tried to hogtie proceedings with tardiness or absenteeism.

One recent day, Rep. Jim Trujillo, D-Santa Fe, delayed the start of hearings before his 13-member Taxation and Revenue Committee because all five Republican members were absent. Trujillo could have started without them because he had a quorum. But, he said, he wanted the rival party to be represented, so he sent aides searching for Republicans while the committee and the public waited.

Republicans began arriving soon after, and Trujillo put the panel to work.

As these conflicts swirl, some of the biggest issues of this 60-day session remain unresolved.

For instance, 75 percent of voters last year supported creation of a state ethics commission, but lawmakers only proposed a bill this week to start putting it in place. That leaves what will likely be a messy round of deal-making for the final half of the session.

Other debates remain on the state budget and high-profile bills, such as medical aid in dying, tax policies and Medicaid buy-in.

When it comes to the legislation that could have the most profound effects on the lives of New Mexicans, it is too early to tell what will happen this session — and what won’t.