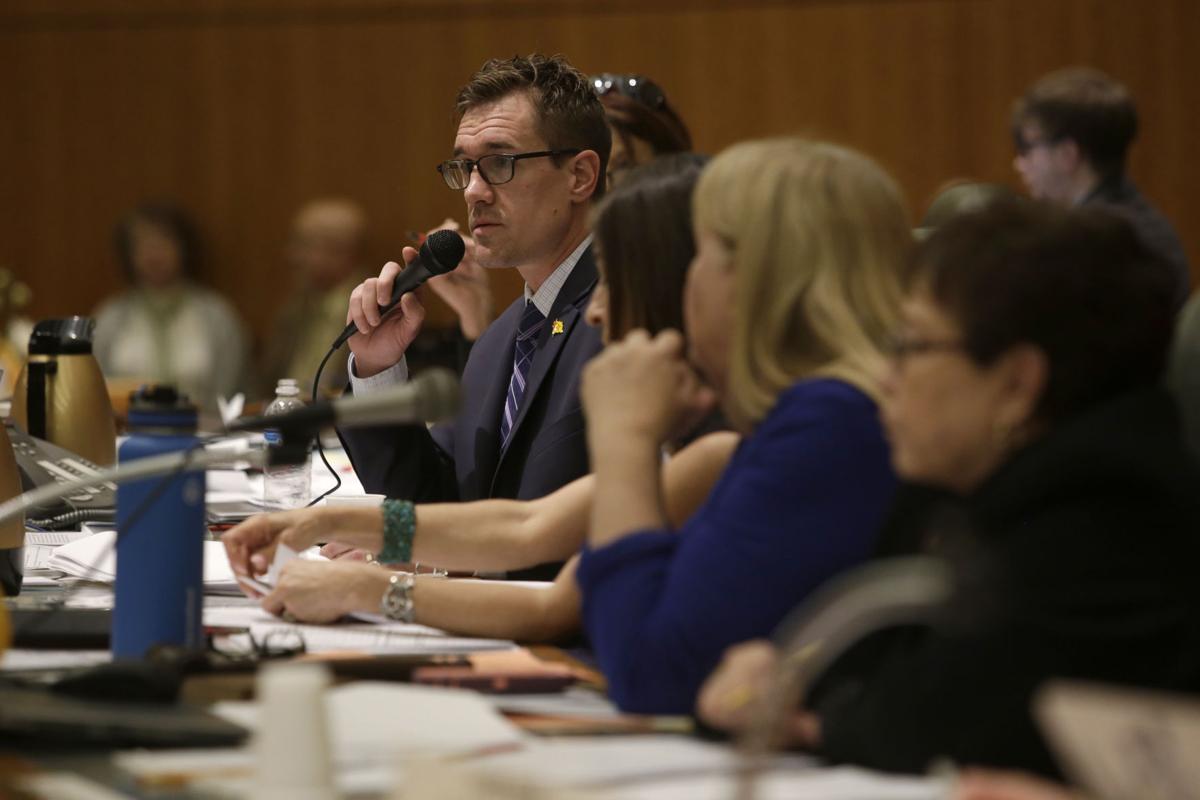 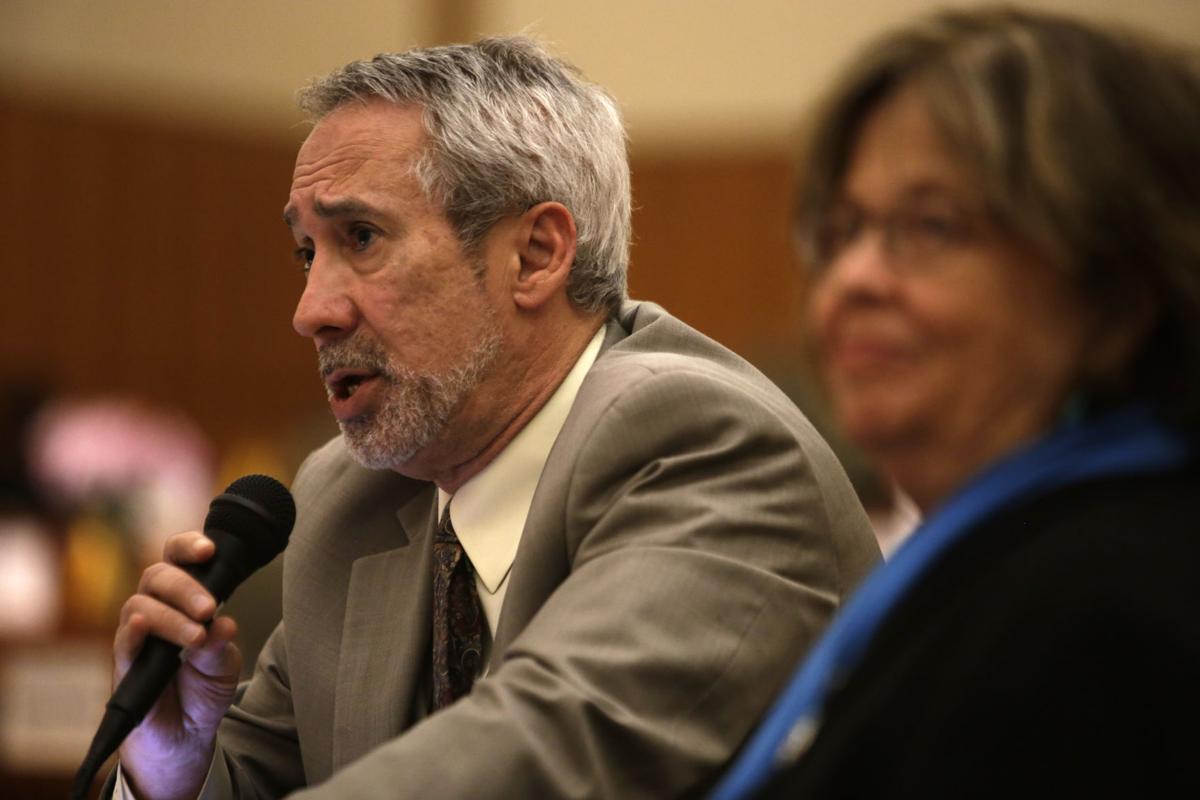 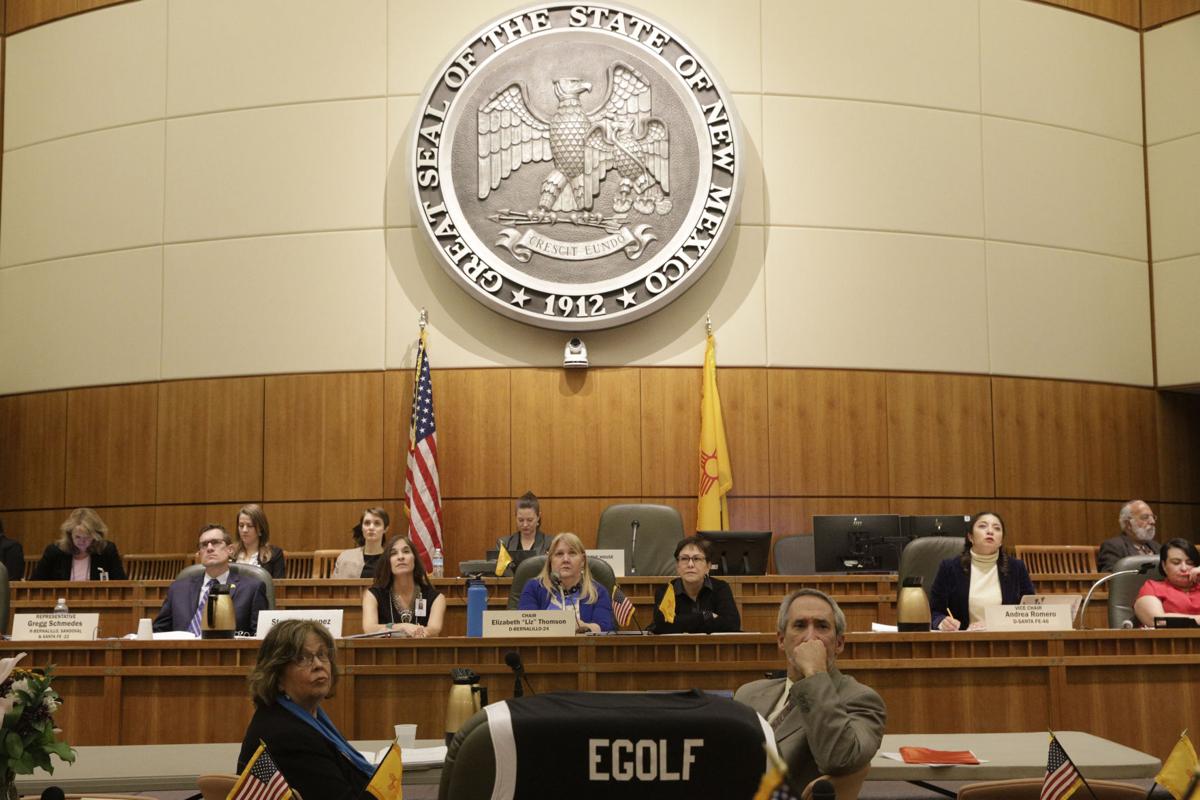 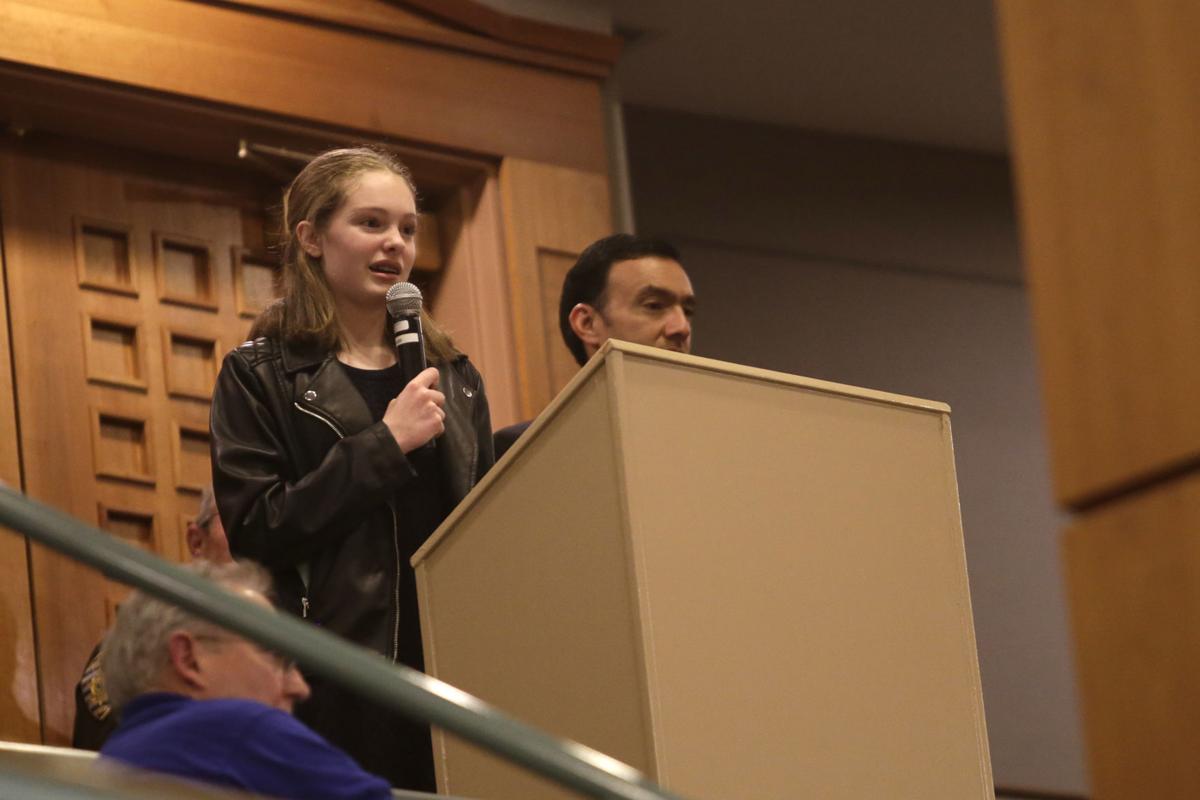 Virginia Moore, an eighth grader at Santa Fe Girls School, speaks in favor of the ‘red-flag’ gun bill Tuesday before a House committee. 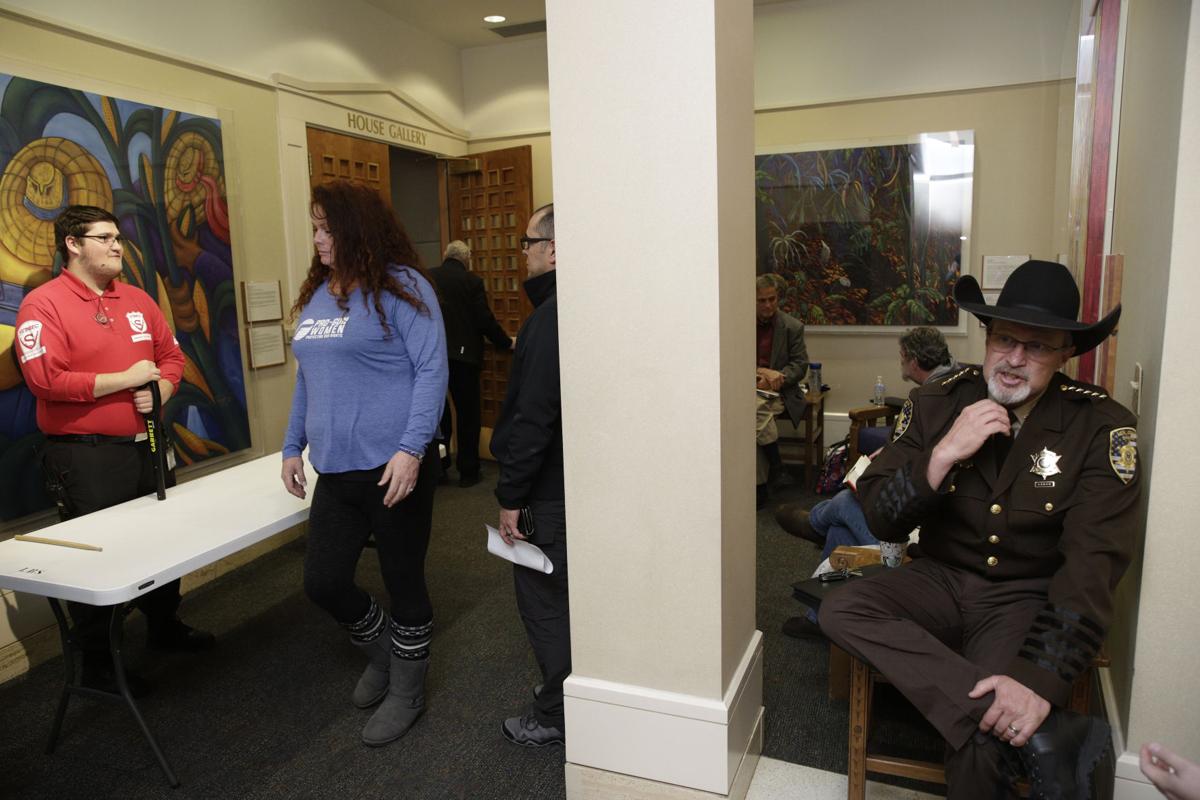 Opponents of the 'red-flag' gun bill wait outside the House gallery before a committee hearing Tuesday.

Virginia Moore, an eighth grader at Santa Fe Girls School, speaks in favor of the ‘red-flag’ gun bill Tuesday before a House committee.

Opponents of the 'red-flag' gun bill wait outside the House gallery before a committee hearing Tuesday.

Despite the freezing cold, Stefani Lord wore a T-shirt that read “Pro-Gun Women” as she waited in line to speak against gun control legislation known as a “red-flag” bill.

“Rural people feel differently from those who live in urban cities,” said Lord, who lives in a rural part of Bernalillo County. “We feel disenfranchised ... like Santa Fe is not listening.”

Opponents of Senate Bill 5, perhaps the most controversial piece of legislation in this year’s session, made what may have been their last stand Tuesday during a House Consumer and Public Affairs Committee hearing. Though the outcome was not unexpected — the Democrat-controlled committee moved it to the House floor by a 3-2 vote along party lines — the frustration felt by the bill’s detractors remained as palpable as it was last week, when it passed the Senate by a narrow 22-20 vote.

If the House approves SB 5 — which is likely, since Democrats who favor the bill outnumber Republicans by a ratio of almost 2-to-1 — it will then go to the desk of Gov. Michelle Lujan Grisham, who has been pushing for the bill over the past year.

Many people came to the Capitol to speak about the bill, but their mood, and perhaps words, were more about lifestyle than mere votes.

Nathan Dial, the mayor of Estancia and holder of an open-carry permit, said that when he traveled to Santa Fe last year to argue against some gun control bills that he said violated Second Amendment rights, he thought the battle was one of Republican versus Democrat.

Not anymore, he said Tuesday.

He spoke of a community full of people like him who grew up learning how to use and respect guns; who used them for their jobs (law enforcement, security guard and active duty military); who left them locked up in their trucks “just in case we saw a rabbit” that could become dinner.

So far, the bill’s progress this year has mostly played out against a background of gun violence statistics, political conflict and concerns that its provisions violate an individual’s constitutional right to bear arms and receive due process in the courts.

House Republicans have championed the argument over the past two legislative sessions, arguing Democrats — who outnumber them in the Senate as well — don’t listen to constituents who live in the more distant, rural areas of the state.

House Minority Leader Jim Townsend, R-Artesia, said New Mexicans living in urban areas don’t know what it’s like to reside in an isolated rural community, where, in times of emergency, help is not always on the way.

“Most people who live in urban areas of the state do not understand how long it takes for emergency responders in those areas,” he said, suggesting residents in those locales may have no one to rely on but themselves — and possibly their guns — in such situations.

He said he has received hundreds of emails from SB 5 opponents — both Democrats and Republicans — who say “their constitutional rights have been negated to no benefit” by lawmakers who don’t understand or care about their concerns over the bill.

Those who spoke for and against the bill during Tuesday’s hearing made arguments that, for the most part, had been heard in previous public forums about the legislation.

There was the Santa Fe Prep student who recalled looking for places to play “hide and seek” on campus as a child, but who now looks for those places as a place of refuge from a possible shooter.

There was the man who said more attention should be put into mental, physical and emotional health programs rather than creating a bill that will do little or nothing when it comes to preventing violence — a point echoed by Republican lawmakers on the committee.

And there was Miranda Viscoli, co-president of New Mexicans to Prevent Gun Violence and a supporter of the legislation, who said the bill is about saving lives, including in rural communities, where suicide rates are high.

She cited New Mexico Department of Health statistics from 2018, which reported that of 230 suicides by gun that year, more than 100 were in a rural or a mixed rural-urban region of the state.

“We are listening to them,” she said of those living in rural New Mexico. “Look at the suicide rate in those areas.”

Dial said the conflict may be over the difference in those who grew up in a gun culture and those who did not.

“Somewhere along the line, these values were not passed down in urban cities,” he said.

Others at Tuesday’s hearing spoke to the need to depoliticize the argument.

Lea County Sheriff Corey Helton said he wishes everyone would take the “R [Republican], D [Democrat], I [Independent] and Green [Party]” out of the debate.

Helton, who spoke in opposition to the bill because he said it removes due process from the equation and won’t work as well as existing statutes that allow law enforcement personnel to immediately respond to someone who is armed, said the issue goes beyond where someone lives or how they vote.

“This affects everybody,” he said of the issue of gun violence. But the bill “legislates emotion” and doesn’t follow commonsense procedures for dealing with such threats.

“Are we gonna red flag baseball bats or opioids?” he asked, suggesting those are equally deadly weapons when it comes to harming others or taking one’s own life.

SB 5 is likely to be heard on the House floor by the end of the week.

Townsend said though he knows it may be a losing battle, he’s going to do everything he can to stop or slow it down.

“I’m not ready to give up,” he said. “I still think we’re on the right side of the argument.”

I think ERPO bills, at some point, need a day in Federal court to define acceptable due process so that all the state ERPO laws can be held to a common standard. The State Senate took out even the language saying you have the right to an attorney. Its the 14A stuff that bothers me. In the realm of life, liberty, and property rights, where do Constitutional rights fall as far as due process? Any ConLaw profs out there?

Here is one opinion.

Miranda Viscoli, co-president of New Mexicans to Prevent Gun Violence is an operative of and supported by the Bloomberg Anti Gun organization. She and her following of chattering old white women in red T shirts represent New York money pushing the New York agenda. Sadly our governor and many of her democrat minions are bought and paid for with Bloomberg money.

Nope, not with Moms Demands Action or Everytown and we don't take any money from Bloomberg.

I have a bone to pick with Bloomberg, Everytown, and Moms from my experience at being run over by the Bloomberg bus in 2017 with the UBC bill. But from everything I know, NMTPGV is a true NM grassroots organization. Give it up, Charles.

Not a chance, Khal. She pushes the Bloomberg agenda and in my opinion they receive well washed Bloomberg funds. And one thing I know for a fact, her group does not support the people of NM. You hang with here if you want, I will continue to hammer her with the truth at every opportunity.

Show me the data. You can look up the 501c3 reports. Where are your numbers?

I'll criticize anyone about anything, but if I say someone is on the take, I better have data.

For some reason your last two post do not give me the option of responding.

All I am saying is that if you accuse someone of taking Bloomberg money, its important to back it up. Plenty of reasons to disagree on policy, but if you make a factual statement, its gotta have teeth.

So, you are addressing statement and questions to me but not giving me the option of answering ?

Answer all you want. I am not stopping you.

I can't answer. Your last four posts do not have a reply option.

If in acted into law, it will be challenged in court. Some aspects of it violate the 1st amendment ( freedom of speech), 2nd amendment (right to bear arms) and 14th amendment (the right to due process). It will also violate an act passed unanimously in 2015 HB56 against civil confiscation of assets. This act was designed to prevent the government from seizing assets before being charged with a crime.

anything to follow the mantra of the controlling Bloomberg and Soros for the perks they can provide for the democrats. Hiding under the veil of public safety and abusing the power, MLG