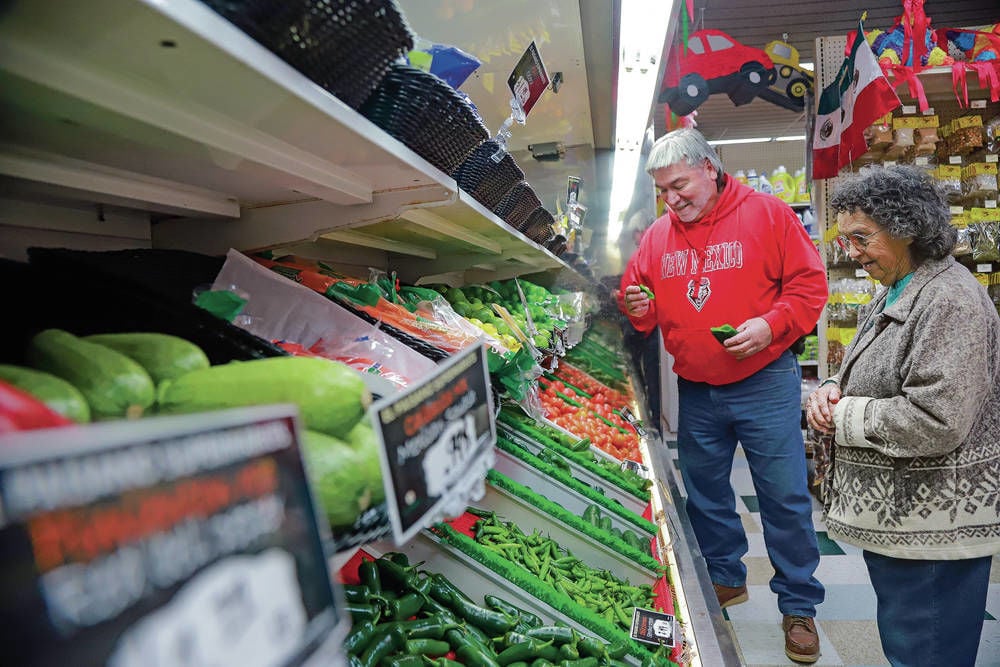 Demetrio Martinez and Aurora Hentzen shop for poblano peppers in the produce section of of El Paisano Supermarket on Tuesday. Two bills in the Legislature again seek to tax food in New Mexico. A sponsor says the revenue would benefit rural communities. Gabriela Campos/The New Mexican 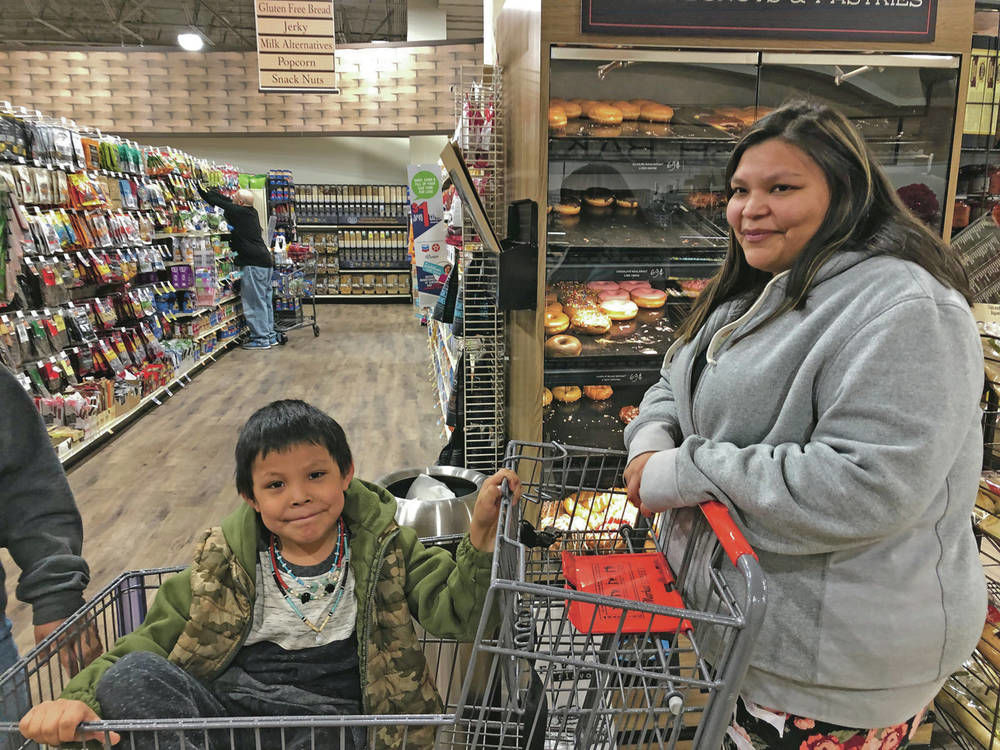 Mariah Peña and her family shop for groceries in a Santa Fe supermarket Tuesday. ‘Why should food be taxed?’ Peña said. ‘Just trying to make it as a single mom is hard enough.’ Rebecca Moss/The New Mexican

On a frigid Tuesday morning, Mariah Peña drove from her home at San Ildefonso Pueblo to go grocery shopping in Santa Fe with her son and little sister. Inside the Market Street supermarket, 7-year-old Damian settled onto his back in Peña’s empty shopping cart, kicking his legs up in the air in front of a case of donuts.

“Why should food be taxed?” Peña said. “Just trying to make it as a single mom is hard enough.”

But two bill introduced at the Legislature seek to do just that.

Bipartisan-sponsored Senate Bills 585 and 584 would reinstate food taxes while reducing the baseline gross receipts taxes from 5.125 percent to 5 percent. In Santa Fe, grocery items such as produce, meat and baby formula would incur an additional 8.4375 percent, the rate of the state and city’s combined gross receipts tax. (Additional taxes on top of the 5.125 base vary statewide.)

The bills also could amend or limit payments the state makes to cities and counties to compensate for money lost in food sales taxes.

Sen. John Arthur Smith, D-Deming, a co-sponsor for the bills, says without taxing food, rural communities do not have enough of a tax base to support community services, like competitive pay for police officers.

“Their source of revenue is gross receipts tax,” Smith said of rural areas and smaller cities.

Retail has all but disappeared in these communities, Smith said, with little more than McDonald’s and Love’s Travel Stops gas stations to fill the revenue gap. In the meantime, the state is paying communities roughly $150 million each year to make up for revenue lost from not imposing a food tax.

These costs are far higher than what the state anticipated, said Smith, chairman of the powerful Senate Finance Committee.

Reinstating a food tax would help to broaden New Mexico’s tax base and stabilize the state’s revenue stream, he said.

“We have a situation where, from a moral standpoint, we can’t charge tax to poor people. But when we removed the food tax, we went up a half percent on everything else. So we really made our tax system more regressive on the poor,” Smith said. “The bills are trying to mitigate some of the damage that’s been done.”

Smith also said lower-income communities rely on the federal Supplemental Nutrition Assistance Program and would see less of the impact from the state tax than the higher-income Santa Fe shopper at Whole Foods and Trader Joe’s.

But detractors of the bills point out that SNAP benefits are supplemental, and lower-income households would still feel the burden of increased food costs.

The legislation has not proved popular among grocery shoppers, some state Democrats or Gov. Michelle Lujan Grisham. While campaigning last year, Lujan Grisham said she would not support a food tax, and spokesman Tripp Stelnicki said the governor “has not budged there.”

New Mexico was the second state in the nation to impose food taxes, enacted in 1933 during the Great Depression. But such taxes were meant to be temporary, emergency provisions.

Instead, New Mexico continued to tax food for decades, until 2004, when years of lobbying resulted in a repeal under Gov. Bill Richardson. Removing a food tax also implemented “hold harmless” payments to cities, filling in for the lost tax revenue.

In 2013, last-minute legislation was passed to phase out these payments over a 15-year period beginning in 2015.

New Mexico, with hundreds of tax loopholes, is in dire need of tax reform, said Fred Nathan, executive director of Think New Mexico, a local think tank. But that reform should not focus on fundamental human needs, like food and medicine, he said.

“It is puzzling that these bills, rather than focusing on overall tax reform, instead go after the food tax exemption,” Nathan said, “The one exemption that benefits hundred of thousands of low and middle income New Mexico families and that enjoys wide public support.”

The majority of states — 34 — do not impose food taxes.

At Santa Fe grocery stores, most shoppers said the tax was a bad idea. Many were unclear how the state would benefit from increasing their grocery bills.

“It’s a bad idea to tax food and medicine because the people who can least afford it get taxed, and you can’t really do without either one of those things,” said Dr. Jim Webster, 87, shopping in the dairy aisle. “Tax gasoline.”

Edmundo Mendoza, 28, a bar manager at Bar Alto, said the cost of living in Santa Fe already is high enough.

“Honestly, I like it where it’s at right now, where it’s not taxed at all. You pay for what you are getting,” he said. “Santa Fe is already expensive as is. Why should food costs go up too?”

A 2017 Legislature-funded tax study by the consultant group Ernst & Young found residents earning between $15,000 and $39,000 annually would see the largest impact on their total income as a result of a food tax.

Smith is realistic that gaining traction for his bills is “going to be a tough hill to climb.”

“I see these bills as being message bills,” he said. “It is probably going to be later than sooner, but it is going to happen someday.”