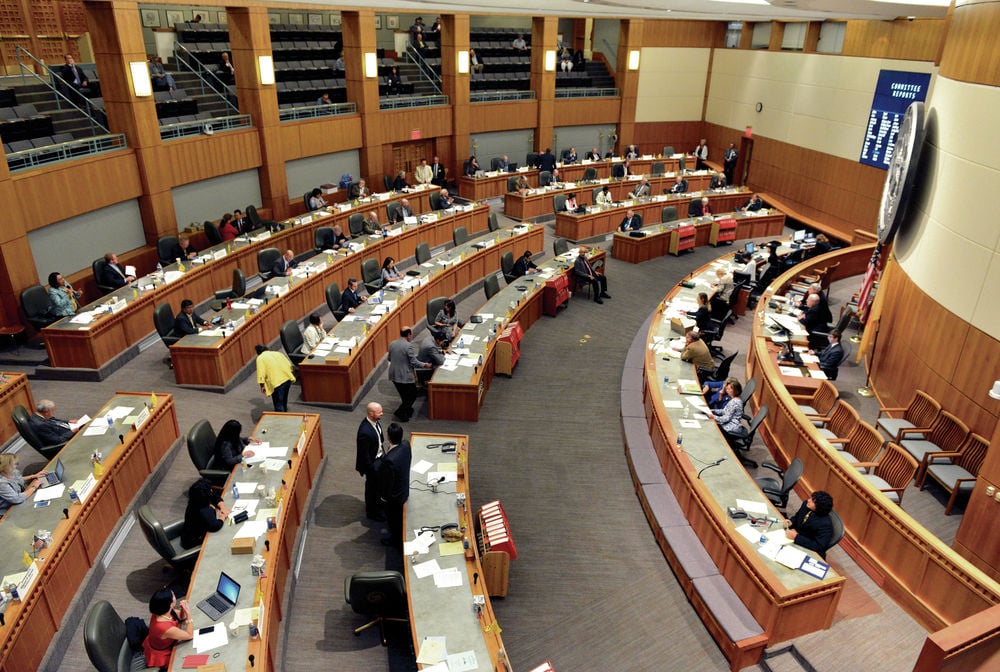 Members of the New Mexico House of Representatives work Saturday during the second day of the special session. Clyde Mueller/The New Mexican 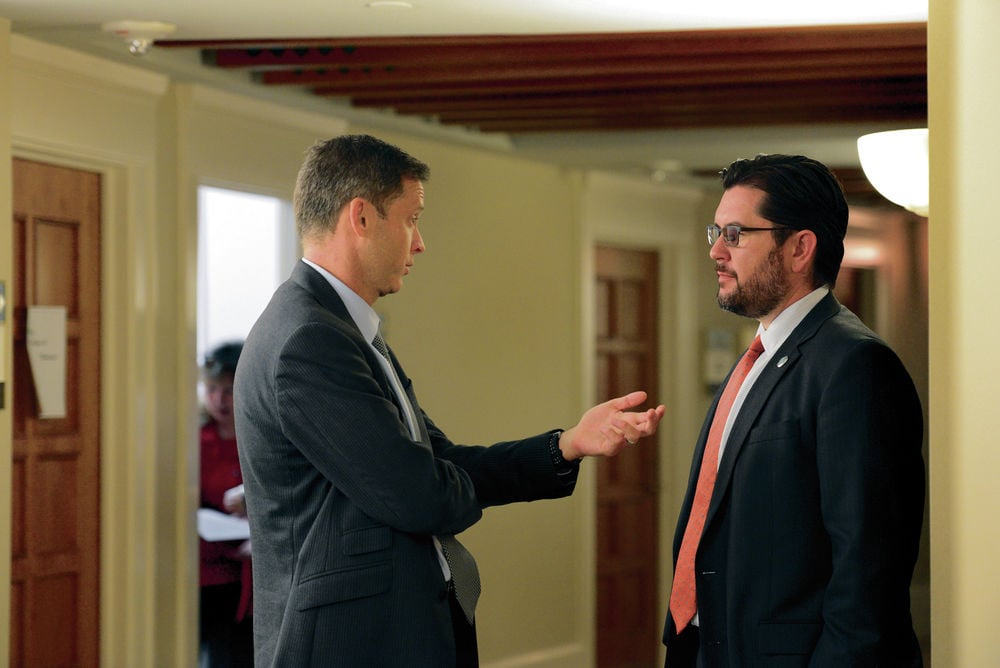 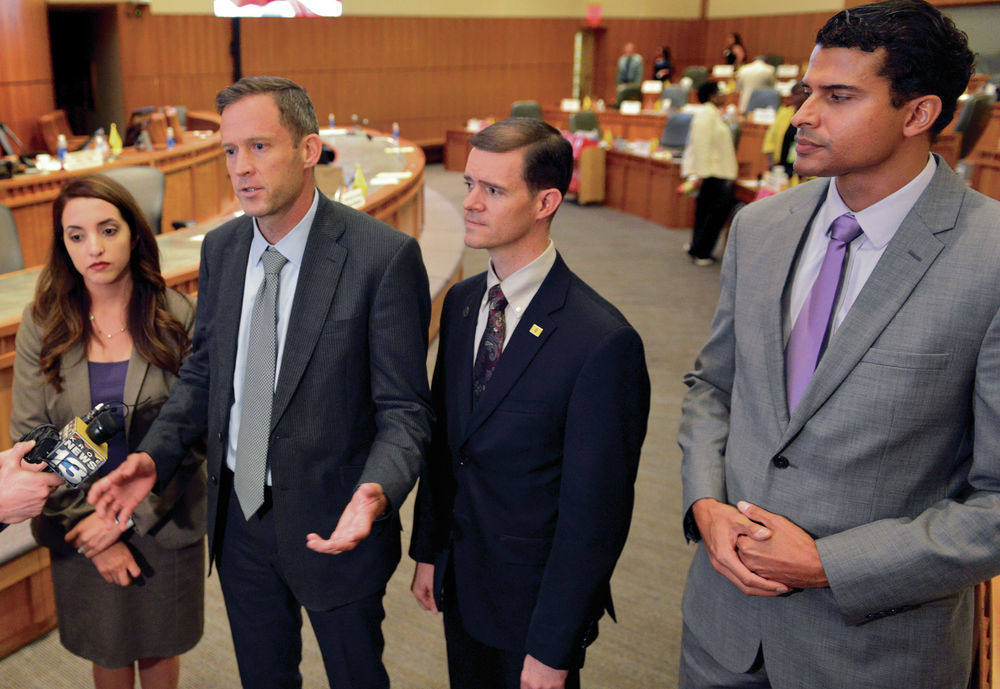 From left, Republican state Reps. Sarah Maestas Barnes of Albuquerque, Nate Gentry of Albuquerque, Jason Harper of Rio Rancho and Conrad James of Albuquerque hold a news conference Saturday on the House floor to express their dissatisfaction and frustration that the Senate adjourned Saturday after midnight. Clyde Mueller/The New Mexican 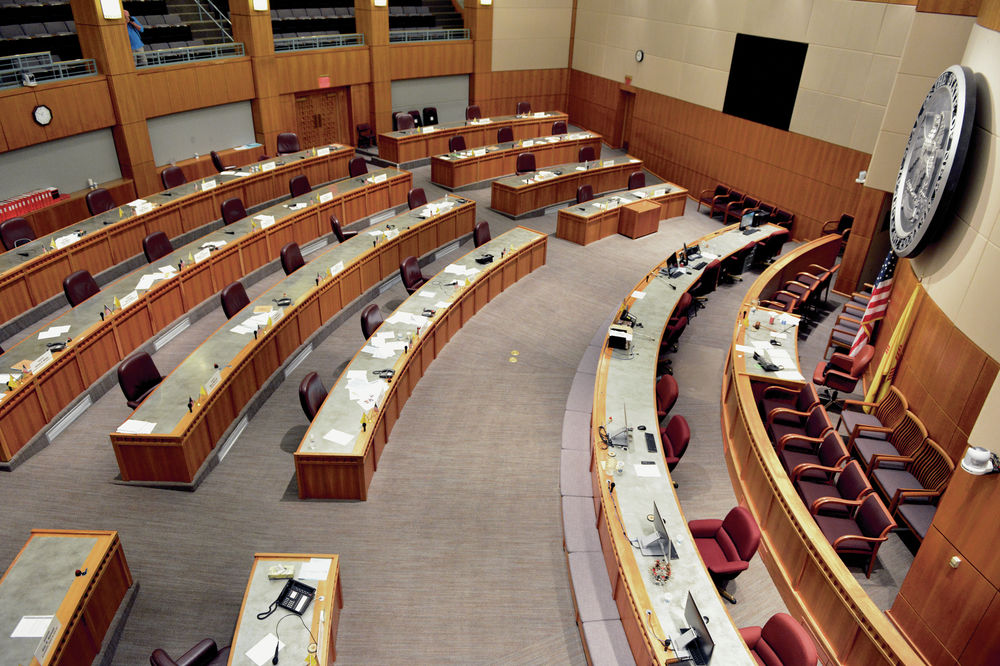 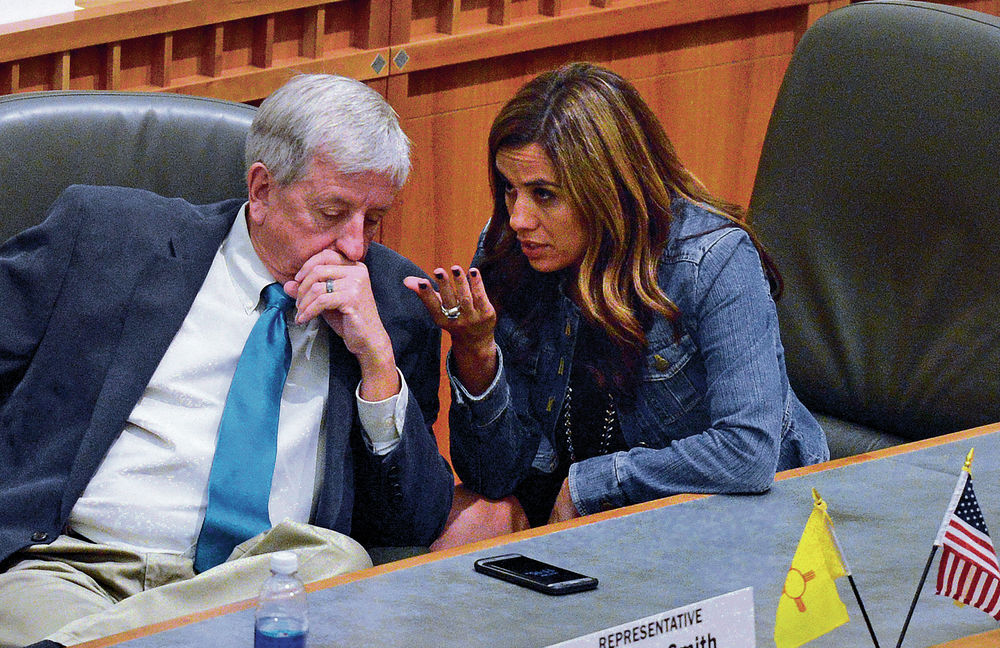 Members of the New Mexico House of Representatives work Saturday during the second day of the special session. Clyde Mueller/The New Mexican

From left, Republican state Reps. Sarah Maestas Barnes of Albuquerque, Nate Gentry of Albuquerque, Jason Harper of Rio Rancho and Conrad James of Albuquerque hold a news conference Saturday on the House floor to express their dissatisfaction and frustration that the Senate adjourned Saturday after midnight. Clyde Mueller/The New Mexican

The New Mexico House of Representatives passed a bill Saturday allowing judges to sentence anyone convicted of intentional child abuse resulting in death to life in prison.

Despite bipartisan support for expanding what is known as Baby Brianna’s Law, the proposal touched off what at times was heated debate over the very purpose of a special session, which was called to address the state’s budget deficit but which the House so far has steered mostly toward criminal sentencing bills.

And by the time House members recessed Saturday evening, they had yet to take up legislation reinstating the death penalty or a bill broadening New Mexico’s “three strikes” sentencing law, leaving for another day what will likely be the most partisan, emotional debates of the session.

As they began the special session’s second day, Democrats continued to accuse Republicans of trying to distract from New Mexico’s financial woes by stacking the agenda with tough-on-crime proposals.

But the sponsors of expanding Baby Brianna’s Law, Reps. Sarah Maestas Barnes and Conrad James, both Republicans from Albuquerque, argued that the focus on crime is a necessary response to the outcry over recent killings that have shocked the state.

Baby Brianna’s Law was named for Brianna Lopez, a 5-month-old baby in Las Cruces who died at the hands of her father and uncle in 2003 while her mother did nothing to stop it. The case re-emerged in the headlines last month when Brianna’s mother, Stephanie Lopez, was released from prison after serving 13 years of a 27-year sentence, though the modification of the law being proposed would have had no bearing on the mother’s release.

Originally passed in 2005, the law classified abuse resulting in the death a child under the age of 12 as a first-degree felony punishable with life in prison. The version representatives approved Saturday would expand the law to include abuse cases involving children up to the age of 18.

Democrats, however, accused Republicans of using the proposal to play politics.

When Maestas Barnes referenced the death of Victoria Martens, the 10-year-old Albuquerque girl who was drugged, sexually assaulted and dismembered in August, and called on legislators to “stand up for the victims instead of advocating for the offenders,” Rep. Antonio “Moe” Maestas, D-Albuquerque, called on Republicans to “save that for the commercial in two weeks.”

Maestas accused Republicans of focusing on crime to score political points ahead of the November election, in which both sides are vying for control of the Legislature.

“If your presidential candidate is going to get smoked by 10 points and you’re running in competitive House districts, bang away at crime,” Maestas said, accusing Republicans of “trying to provide political cover as Baby Brianna’s mother walks from prison and Victoria Martens rests in heaven.”

A fiscal analysis of the bill by legislative staffers noted that no children between the ages of 12 and 18 are reported to have died from abuse or neglect in New Mexico during the last three years. The state reported 28 such fatalities involving younger children during that same period.

Democrats nonetheless supported the measure, which Rep. Stephanie Garcia Richard, D-Los Alamos, amended to also eliminate the time limits on prosecuting cases of criminal sexual contact of a minor and enticement of a child. The amendment allows prosecutors to pursue such cases years after the crime.

Rep. Christine Trujillo, D-Albuquerque, cast the only vote against the bill, saying later she agreed with the point of the legislation but disagreed “with the whole process that we’ve gone through,” referring to the House leadership’s focus on criminal justice legislation.

The bill will not go far, however, with the state Senate having adjourned the previous night following a marathon session on budget legislation.

The decision to go home seemed to be Senate Democrats’ way of snubbing calls by Gov. Susana Martinez to take up controversial criminal sentencing bills weeks before the election.

James, the bill’s co-sponsor, chided Senators after the legislation passed.

“We saw a lot of bipartisan support for it. Now we need to get the Senate back up here to act on it,” he said.

House leaders appear poised to drag out debate on their agenda of criminal sentencing legislation.

The House did not act Saturday on a proposal to impose life sentences on some repeat violent criminals or on a bill to reinstate the death penalty in cases involving the murders of children and law enforcement officers.

Debate over capital punishment dragged into the night during a meeting of the House Judiciary Committee on Friday. Democrats railed against the proposal, arguing that it is too important to take up in a short special session when lawmakers are also grappling with a $750 million budget shortfall.

The committee passed the bill 7-6, voting on party lines to send it to the House Appropriations and Finance Committee.

Egolf argued the death penalty legislation is “chock-full of antiquated language,” citing provisions exempting the “mentally retarded” and the “insane.”

Youngblood said Saturday her bill incorporates much of the same language from New Mexico’s old death penalty statute, which lawmakers repealed in 2009. Wording about “mental retardation,” she added, can be found throughout New Mexico’s statutes.

“This law has been tried and tested,” she said, arguing that drafting a radically different statute could present a different set of legal problems during appeals and court challenges.

The bill is narrowly tailored to apply only in cases involving the murder of children or law enforcement officers.

“Would I like it expanded? Of course, because everyone’s life matters,” Youngblood said.

But she added that the bill is more likely to pass than broader legislation and argued lawmakers must push for some kind of death penalty law following recent high-profile killings.

“We’re seeing our children and police killed,” she said. “We need to do something.”