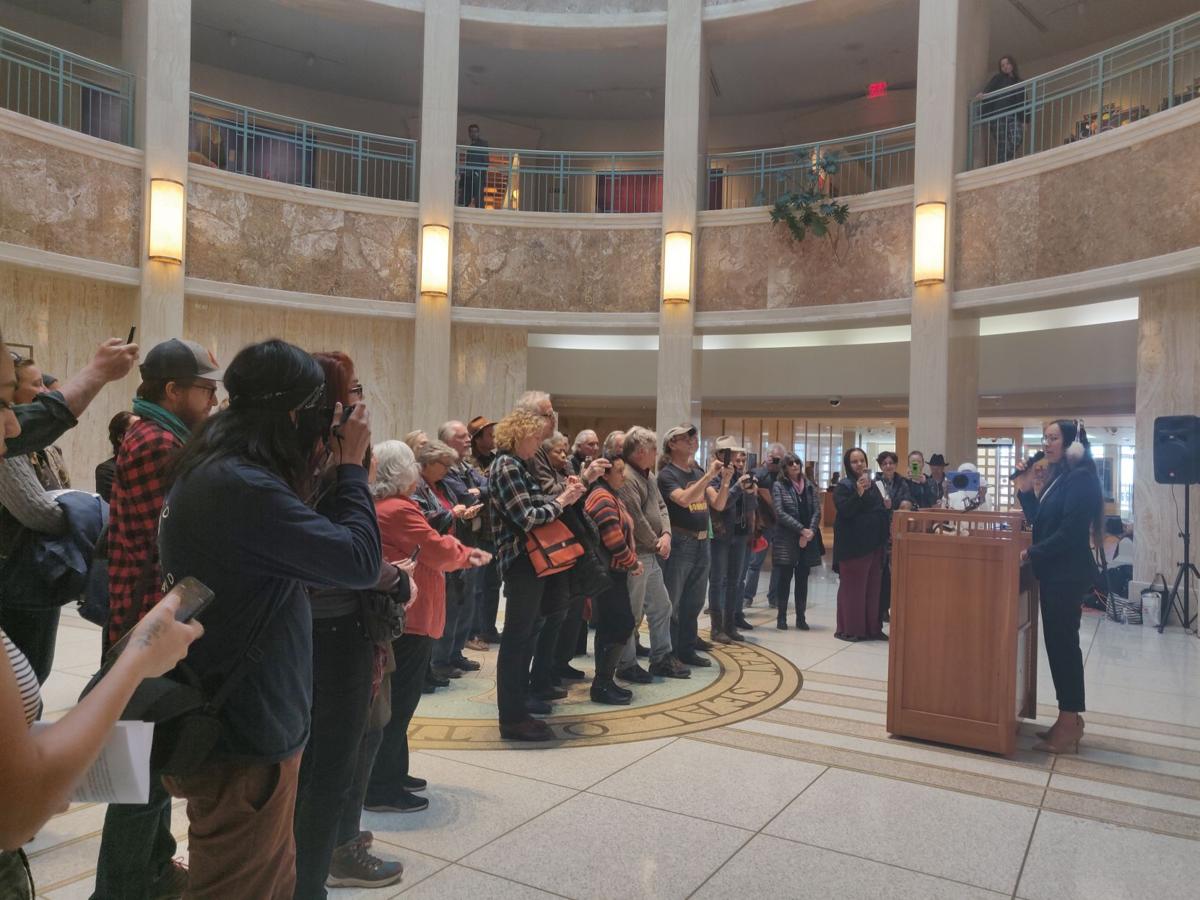 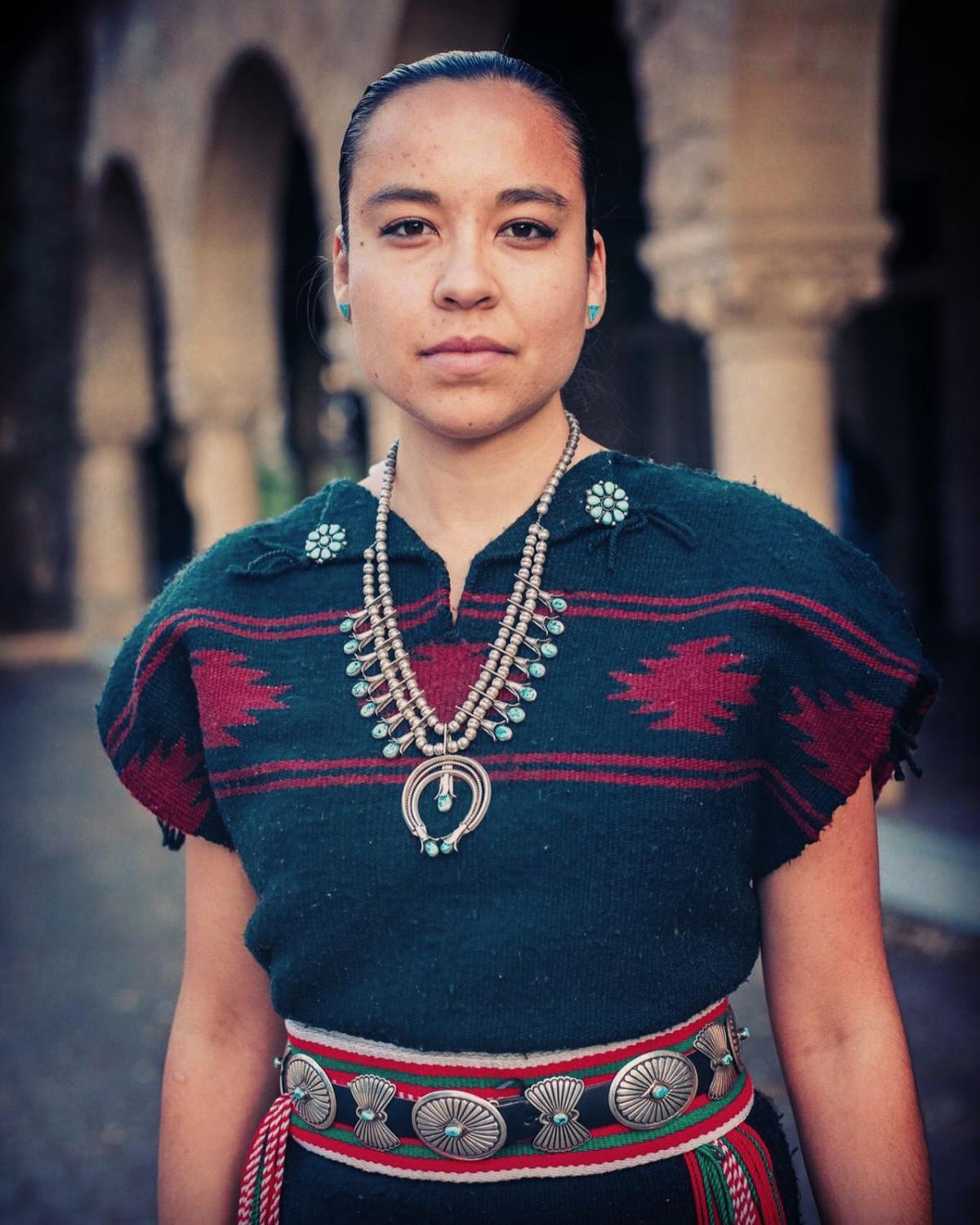 Climate activist, musician, spoken word artist and community organizer Lyla June Johnston, 30, delivered an impassioned speech Thursday at the Capitol about what she said is a dire need to shift the state away from its economic reliance on the oil and gas industry.

Nearly 50 supporters gathered in the Roundhouse Rotunda for the formal announcement of her challenge to state House Speaker Brian Egolf in the 2020 Democratic primary election.

Johnston, who earned her bachelor’s degree from Stanford University and her master’s degree in education from the University of New Mexico and is currently pursuing a doctorate, told The New Mexican on Tuesday about her candidacy for state House District 47.

On Thursday, she criticized Egolf on his own turf for legally representing the largest medical marijuana company in the state and for not doing enough to fight oil and gas interests, which account for roughly 45 percent of the state’s income.

Johnston is the first challenger for Egolf’s seat in years.

“He’s been here for nine years, and he’s done a lot of great things,” Johnston said of Egolf.

“But we live in a system that is very hard to maintain your integrity in,” she told supporters. “And I can understand that the vast temptations that come the way of our politicians are hard to resist.

“And so I honor the fact that he is not a problem, actually. He’s rather a symptom of a deeper problem, which is that this government is very prone to corporate interest. And so I have a lot of respect for him, but we need someone who can stand up to those temptations.”

The Democratic machine does worry me, esp. after the hatchet job they did on Carl Trujillo while rooting for, and being blind, deaf, and dumb to Andrea Romero's dismal record as head of the Regional Coalition of LANL Communities. Mr Egolf is a bigshot in that machine and has to be held accountable for its actions.

But meanwhile, we have someone who wants to chop away at 45 percent of the state's income although it will do scant little to alter any global climate issues. What will alter our attempts at climate management is advancing technology to replace fossil fuels. Meanwhile, we need to keep the lights on.

Ms. Johnston worries about Mr. Egolf being around too long and symptom of a problem? I think the underlying problem is the lack of a two party system to keep the Roundhouse honest. We can replace Mr. Egolf, but we have not restored balance to New Mexican politics. We need an adversarial system again rather than a Democratic juggernaut swinging to the left and an inept and irrelevant GOP flapping its toothless mouth on the right.

No mention of Egolf helping himself to $18 million municipal bond to finance his business interests in Sfe. That'a about as corrupt as it gets.

I had no idea Egolf represented the largest cannibis company in the state, or that he made millions off a taxpayer lawsuit. How nice it must be to have a political position that also brings you an endless client base and income not for your legal skills, but for who you know and how to maneuver it through the political machine. WOW, if this doesn’t bother us as voters, I guess nothing will. And how is his wife’s application going for the state (taxpayer) grant for free taxpayer money to open their business. I wonder if Egolf thinks what Hunter Biden did was corrupt?

We need a state constitutional amendment to prohibit lawmakers from taking bribes, er, I mean campaign contributions, and in return, paying them a salary. As far as those other conflicts of interest? I can't imagine, in the words of Capt. Renault, that anyone thinks there is a quid pro quo going on in the Roundhouse.

Just when you think Fanta Se can't get any weirder or more socialist......

Egolf is actually a problem. He has Self Enriched himself. He made millions with a lawsuit against the State of New Mexico Office of the Superintendent of Insurance, dealing with Insurance Premiums. He had the inside track as Speaker, looked at it as a money opportunity and his influence...Yes... he is the 1%. He is conflicted voting on laws, then solicits those Companies to represent them.