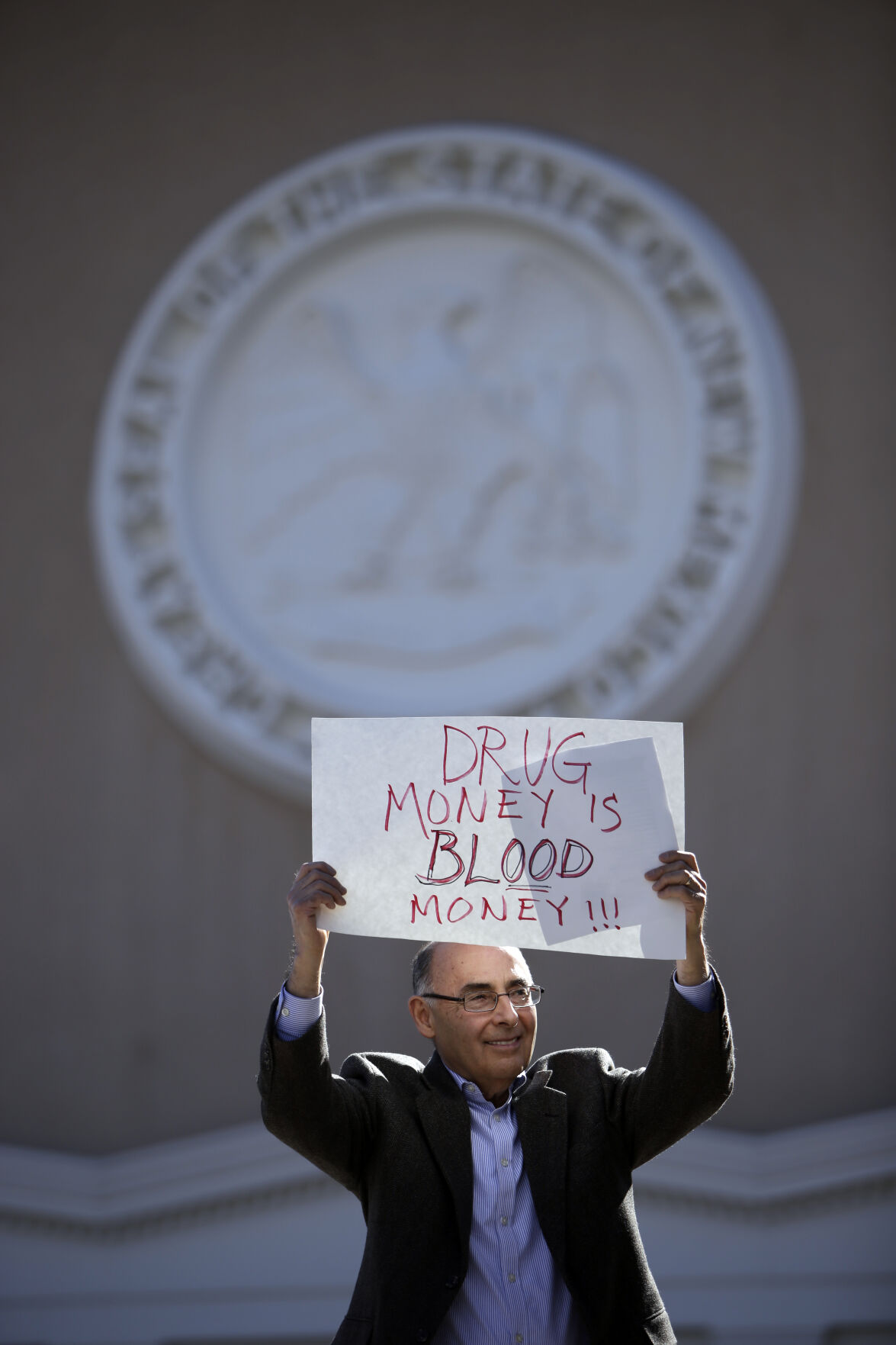 J.D. Vasquez, with the New Mexico Watchman, holds up a sign outside the state Capitol on Tuesday during a protest against legalizing cannabis. 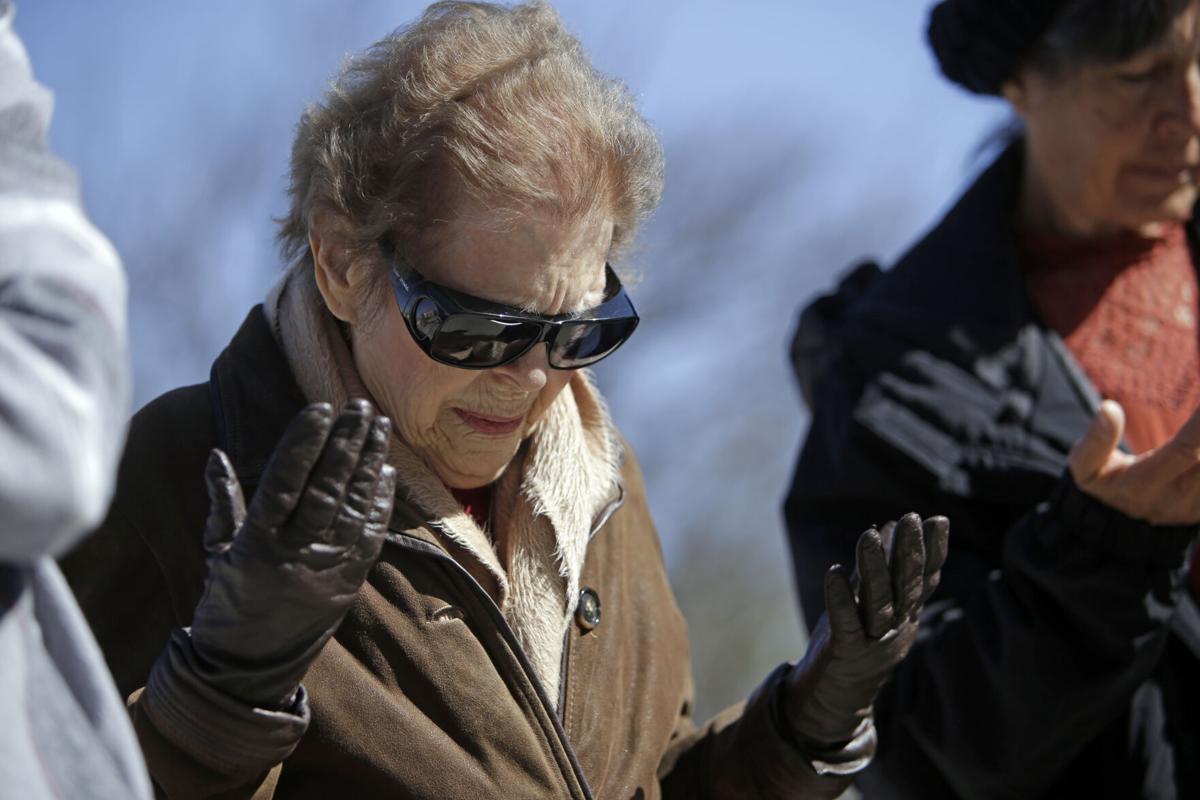 Miki Vasquez, with the New Mexico Watchman, prays during a cannabis bill protest outside the state Capitol on Tuesday. 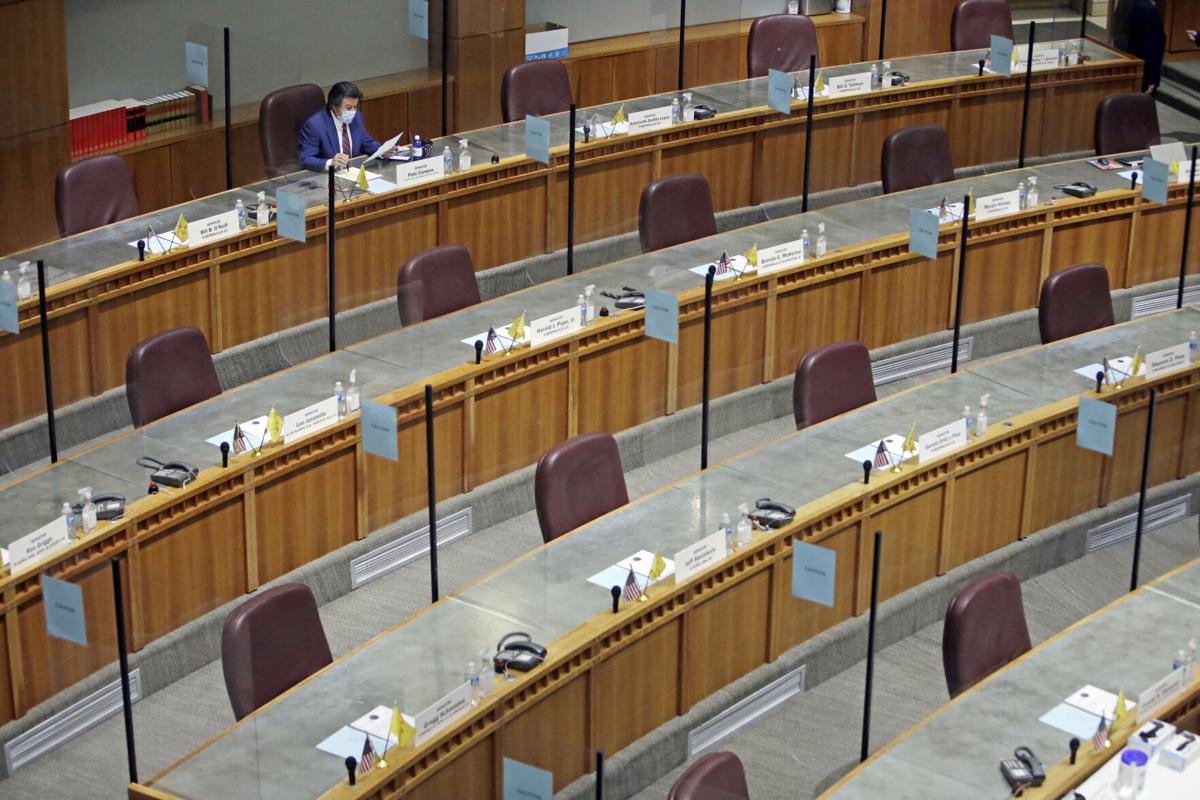 Sen. Pete Campos, D-Las Vegas, sits alone Tuesday on the Senate floor as he waits for the special session to start. 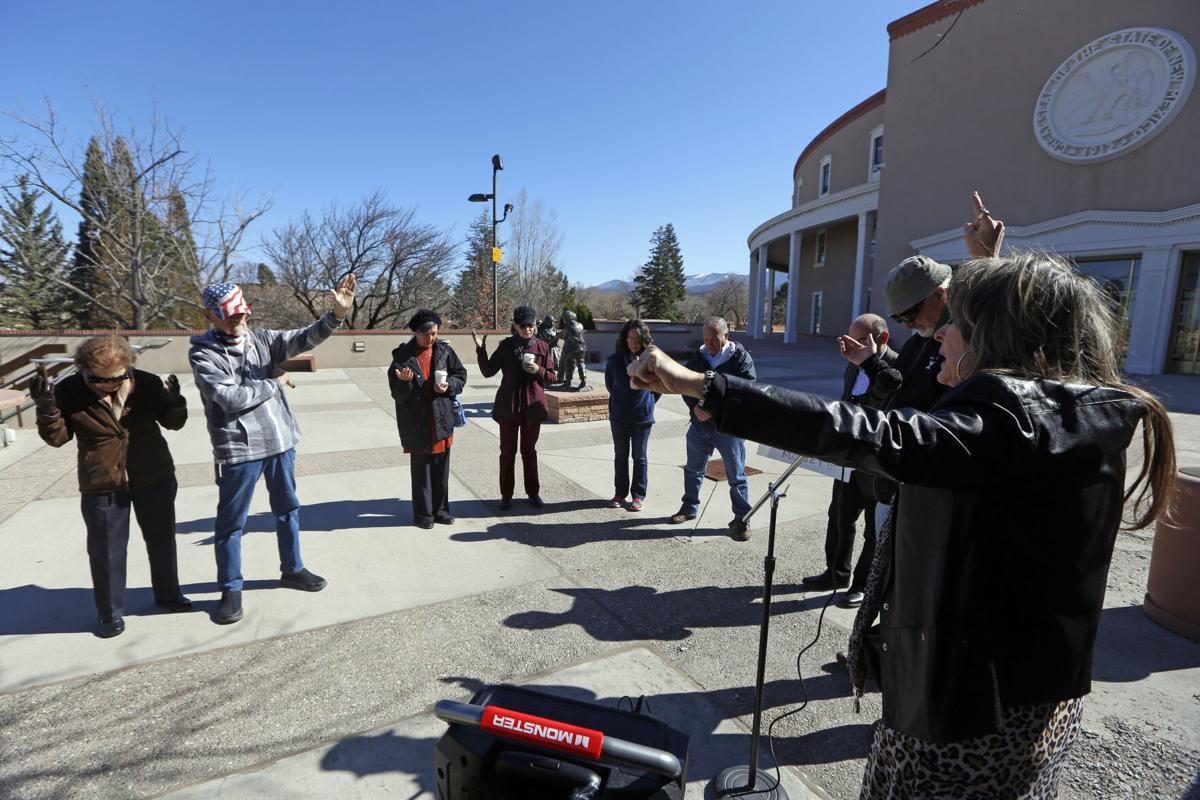 Karen Setters, with the New Mexico Watchman, prays during a cannabis bill protest outside the state Capitol on Tuesday.

J.D. Vasquez, with the New Mexico Watchman, holds up a sign outside the state Capitol on Tuesday during a protest against legalizing cannabis.

Miki Vasquez, with the New Mexico Watchman, prays during a cannabis bill protest outside the state Capitol on Tuesday.

Sen. Pete Campos, D-Las Vegas, sits alone Tuesday on the Senate floor as he waits for the special session to start.

Karen Setters, with the New Mexico Watchman, prays during a cannabis bill protest outside the state Capitol on Tuesday.

High noon is nearing for the legalization of recreational marijuana.

Lawmakers spent the first day of a special session getting two pieces of cannabis-related legislation moving toward the path to approval, and one of those bills was being discussed on the Senate floor late into the evening Tuesday.

The centerpiece of the special session, a bill that would legalize the use of cannabis for adults 21 and over, likely will hit the floor of the House of Representatives for a debate and vote Wednesday morning.

The legislation, now known as House Bill 2, underwent a number of changes in the days and hours leading up to the special session.

Rep. Javier Martínez, D-Albuquerque, said such changes were necessary to appease state leaders, critics and those concerned about whether legalizing recreational cannabis will hurt the state’s Medical Cannabis Program, which is legal.

“Politics is the art of compromise,” Martínez told members of the House Taxation and Revenue Committee on Tuesday.

Martínez was the co-sponsor of a legalization bill during the just-completed regular session that had the best chance of making it to Gov. Michelle Lujan Grisham’s desk. It’s the template on which the revised House Bill 2 is based.

Among the changes in the most recent bill is a yet-to-be-determined cap on plant production through at least 2025. The original bill had no cap.

The revised bill also includes provisions giving the state the right to require at least 25 percent of recreational cannabis be sold to medical cannabis patients if supplies run short, which was not in the original bill.

HB 2 also has more detailed language on the various licensing fees — up to $2,500 for a cannabis producer license; although a micro-business can get one for up to $1,000 — and new guidelines to ensure cannabis is not marketed to those under 21.

Assuming the bill clears the House on Wednesday — which is likely — it will head to at least one Senate committee before it goes to the Senate floor, perhaps as soon as Wednesday.

Earlier in the week, some senators said it’s possible revised legalization legislation will not earn enough votes in the Senate to ensure its success. If just seven Democrats join with the 15 Republicans likely to vote against it, it will fail.

At least two Democratic senators have said they will not vote for the bill.

The cannabis debate carried over into the House when lawmakers debated House Bill 1 to provide about $243,000 to fund the special session.

That bill also makes allowances for nearly $7 million in contingency funds in the coming fiscal year to finance the cannabis legalization bill — assuming it passes.

House Republicans questioned the reasoning for including that money in HB 1.

Rep. Sheryl Williams Stapleton, D-Albuquerque and sponsor of HB 1, said the state needs to ensure it has that money on hand if the cannabis bill passes.

The House voted 42-24 to approve that bill following an hour or so of debate. Later in the evening, the Senate voted 25-12 to also approve it.

Lujan Grisham, a Democrat, called lawmakers back into a special session this week after efforts to legalize recreational cannabis stalled before the end of this year’s 60-day legislative session on March 20.

Even some Democratic lawmakers who have concerns about legalizing cannabis in a state that has struggled with drug and alcohol addition for years believe it will probably happen this year.

Sen. Joe Cervantes, D-Las Cruces and chairman of the Senate Judiciary Committee, has said he is reluctant to support a bill. Still, he told other lawmakers Tuesday he thinks some form of a bill legalizing cannabis will pass.

But even supportive Republicans have shown displeasure with HB 2, preferring instead to back a competitive effort by Sen. Cliff Pirtle, R-Roswell. Pirtle introduced that bill in the Senate on Tuesday. It is likely to be heard in a Senate committee Wednesday.

Earlier Tuesday, members of the House Taxation and Revenue Committee voted along party lines to move HB 2 on to the House Judiciary Committee, which was still debating that bill late Tuesday night. Democrats, who for the most part favor the legislation, hold a majority in that committee.

The Senate is slated to start debating Senate Bill 2, allowing for the expungement of criminal records related to cannabis offenses, on Wednesday morning. On Tuesday, members of the Senate Judiciary Committee debated and vetted that bill for more than four hours before voting 6-3 to approve it.

That expungement legislation was pulled out of the HB 2 bill to address concerns some lawmakers had about tying a plan to expunge those records to a larger bill to legalize cannabis.

On a separate issue, the Senate voted 28-10 to approve Senate Bill 1. That legislation would allow 50 percent of some state and local gross receipts tax from large Local Economic Development Act projects of $350 million or more to be placed in a fund to help draw more of those large projects to the state.

cannabis only involves "blood money" when it remains illicit. Recreational marijuana in CO doesn't circulate any blood money where a person was killed in order to grow and sell it.

Also this line is amusing:

> “Politics is the art of compromise,” Martínez told members of the House Taxation and Revenue Committee on Tuesday.

Funny how "compromise" never means the voters get a better bill; it only ever means politicians make legislation worse for their corporate campaign sponsors.

Well said, and if you don't think big money and powerful political forces are behind wanting smoking dope legalized, you need to wake up. There are huge amounts of money at stake for the growers, distributors (aka "pushers"), and others around pot. If it were not so, it wouldn't have been such a successful "illicit" business all these decades......ask El Chapo....

I will remind people that one of the sponsors of HB12 is #ResistRomero, a well known and experienced " entertainer" and grifter who knows how to waste and take taxpayer monies......

Weird, Mike. No matter what the topic, you always find a way to attack women in power.

I guess neither of you are aware of her record, or you choose to ignore it since she is a left wing liberal woman? How objective and intelligent of you two....https://www.santafenewmexican.com/news/local_news/nonprofit-asks-for-criminal-probe-into-coalition-reimbursements/article_321d404a-6982-52b6-b836-4386c2fabb47.html