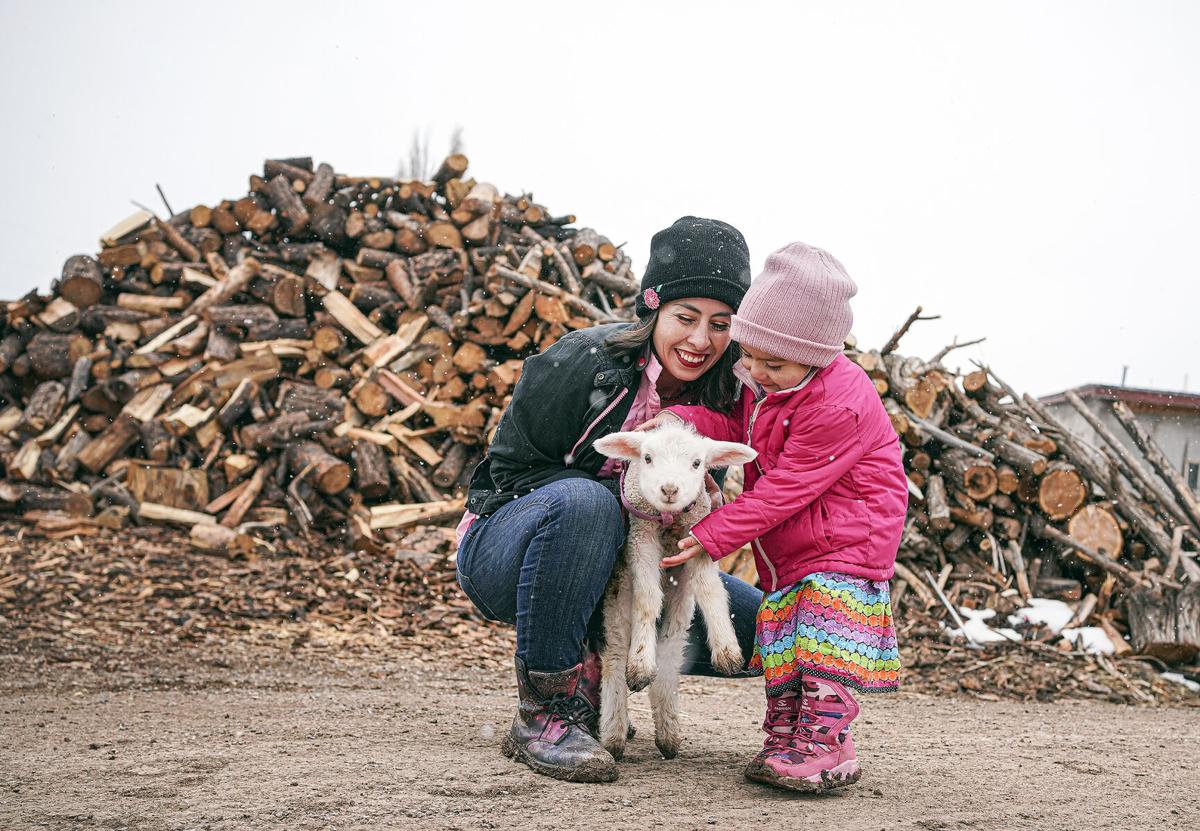 Donne Gonzales and her daughter Lorencita pet Rufus the lamb last month at Chicoyole Farm in Chamisal. Gonzales, 26, supports the Food, Hunger and Farm Act, which calls for the creation of a commission to lay out a plan to reduce hunger in New Mexico and help farmers like her increase their in-state production for residents facing food insecurity. 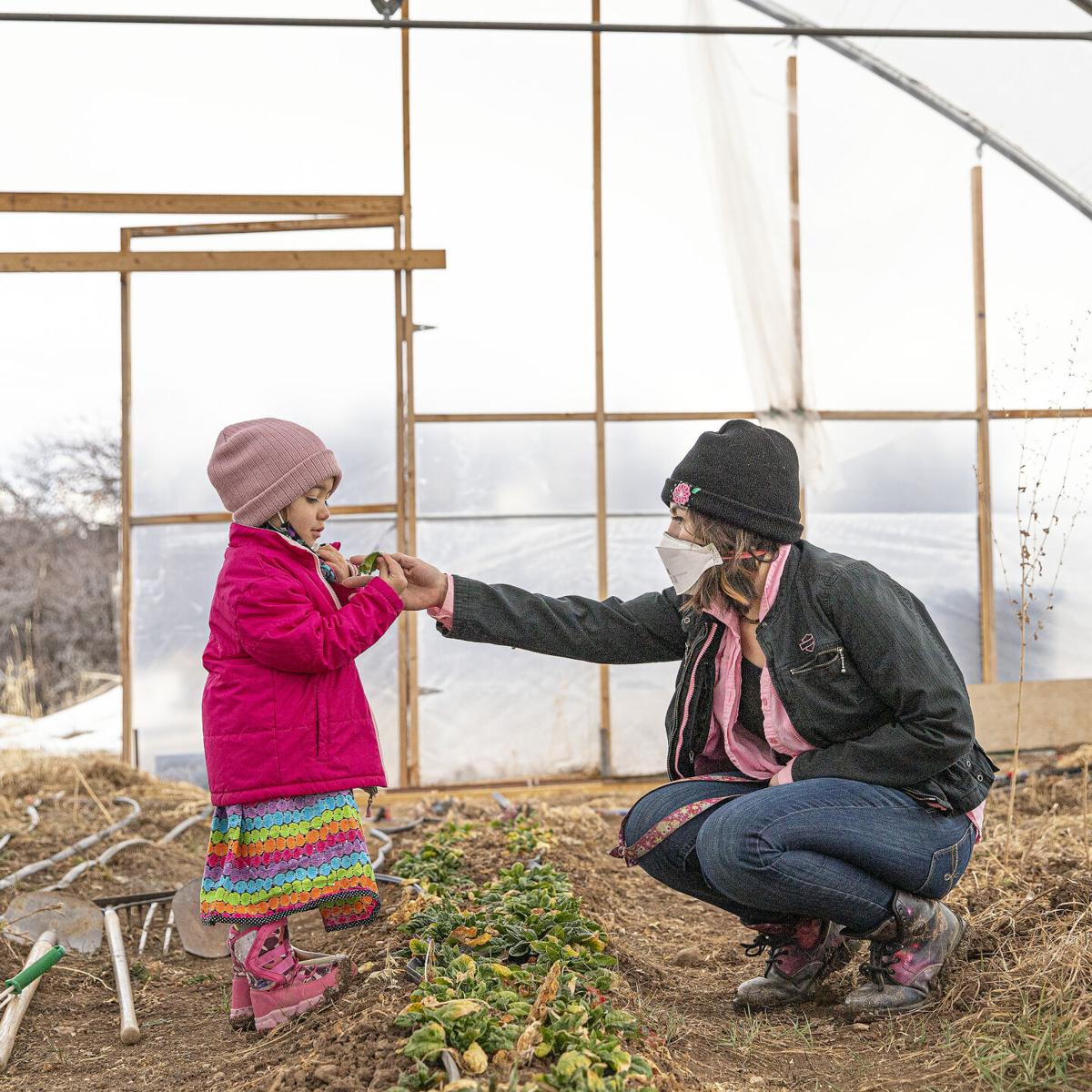 Donne Gonzales and her daughter Lorencita look Feb. 25 at spinach remaining from the previous season in one of the greenhouses at Chicoyole Farm in Chamisal. ‘One in four children in this state goes hungry,’ says Gonzales, who works with a program training new farmers and is a supporter of House Bill 207. 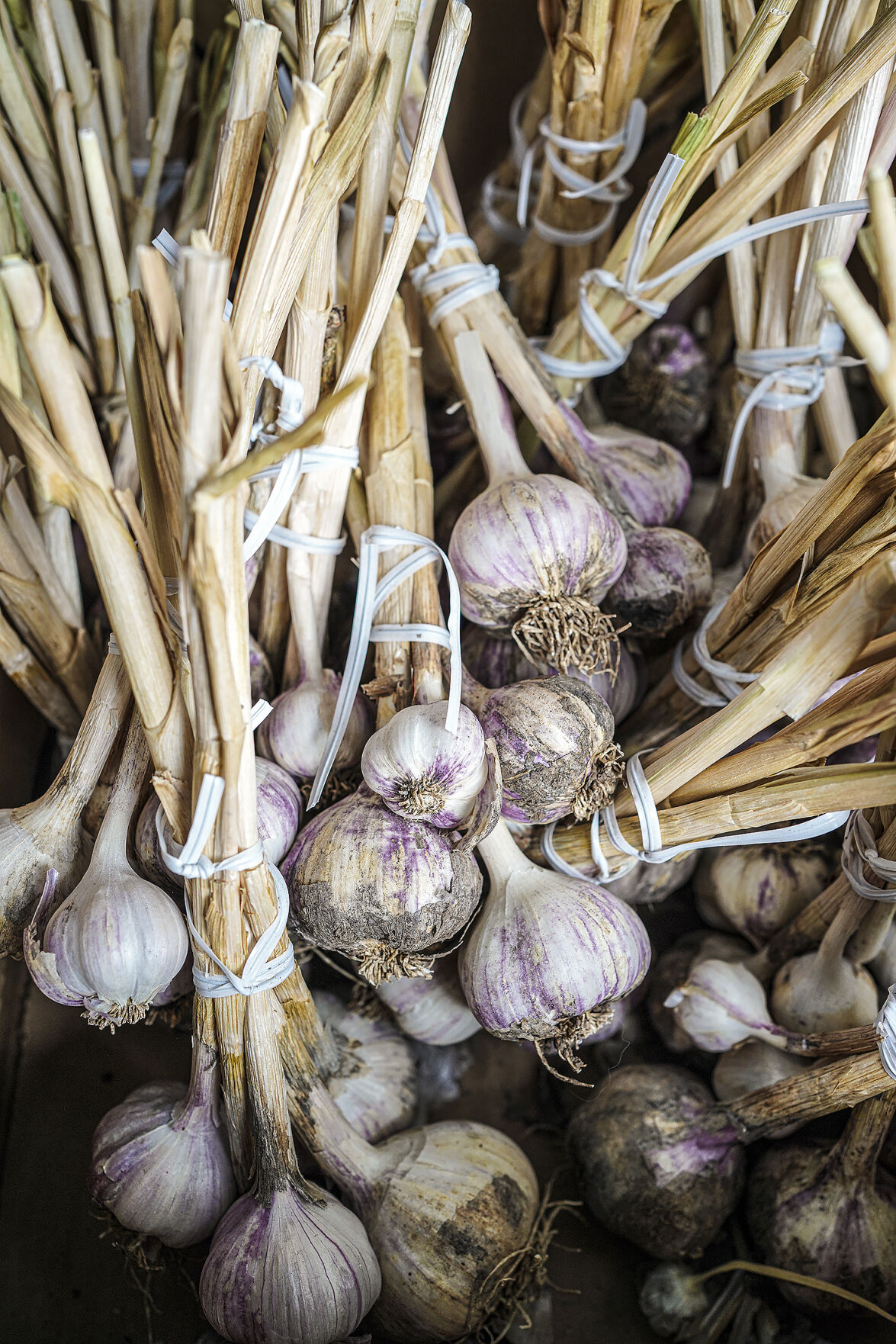 Bunches of garlic from Chicoyole Farm in Chamisal. 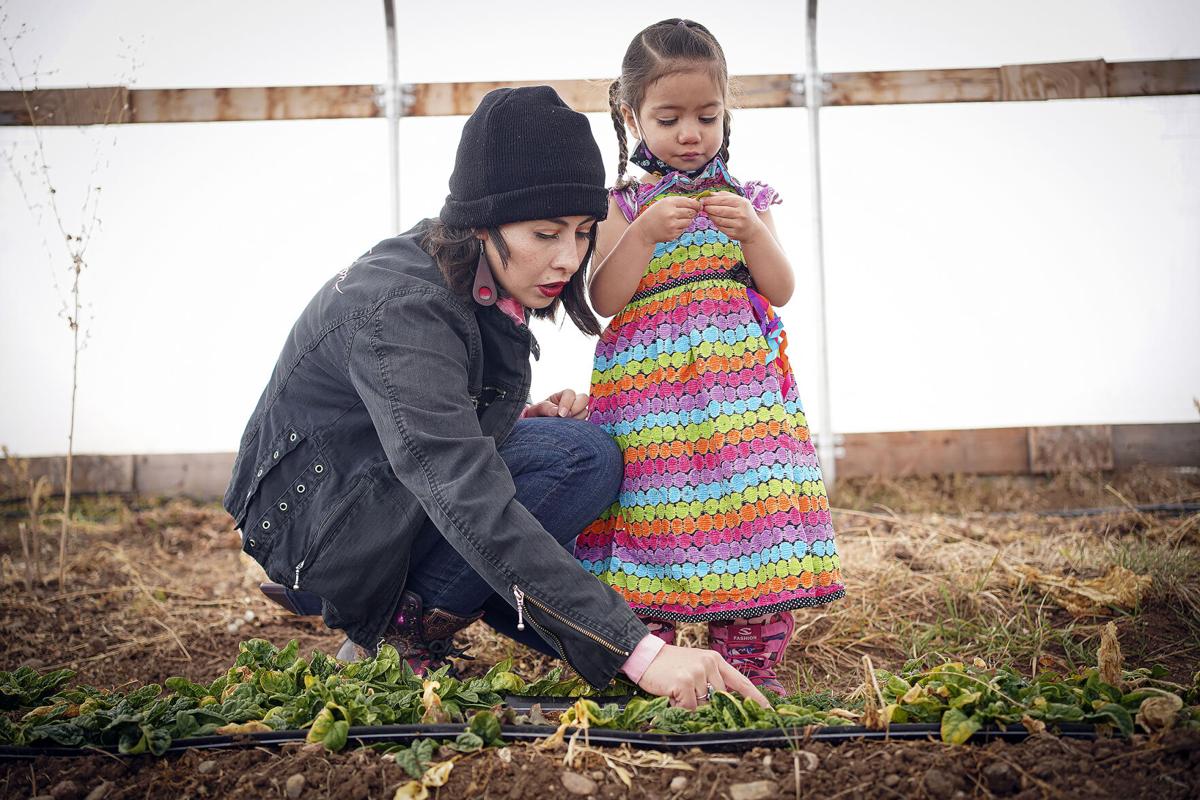 Donne Gonzales and her daughter Lorencita look Feb. 25 at spinach remaining from the previous season in one of the greenhouses at Chicoyole Farm in Chamisal. ‘One in 4 children in this state goes hungry,’ says Gonzales, who works with a program training new farmers and is a supporter of House Bill 207.

Donne Gonzales and her daughter Lorencita pet Rufus the lamb last month at Chicoyole Farm in Chamisal. Gonzales, 26, supports the Food, Hunger and Farm Act, which calls for the creation of a commission to lay out a plan to reduce hunger in New Mexico and help farmers like her increase their in-state production for residents facing food insecurity.

Donne Gonzales and her daughter Lorencita look Feb. 25 at spinach remaining from the previous season in one of the greenhouses at Chicoyole Farm in Chamisal. ‘One in four children in this state goes hungry,’ says Gonzales, who works with a program training new farmers and is a supporter of House Bill 207.

Bunches of garlic from Chicoyole Farm in Chamisal.

Donne Gonzales and her daughter Lorencita look Feb. 25 at spinach remaining from the previous season in one of the greenhouses at Chicoyole Farm in Chamisal. ‘One in 4 children in this state goes hungry,’ says Gonzales, who works with a program training new farmers and is a supporter of House Bill 207.

The best thing about being a farmer, said Donne Gonzales of Chamisal, is rising every morning to hear the world wake up.

The 26-year-old New Mexico native loves the morning songs of birds and the rush of water in the acequias. To her, these sounds speak to the land’s power to provide and to a hope that someday no one will lack for food.

“One in 4 children in this state goes hungry,” said Gonzales, who also works with a program training new farmers.

“They are not getting the nutritional value, which leads to deficiencies and health issues and weight problems,” she added. “Then they are not healthy, not feeling good, and they cannot be paying attention in our educational system while their tummies are growling.”

Gonzales is throwing her support behind the Food, Hunger and Farm Act, ambitious legislation that calls for the creation of a commission to lay out a plan to reduce hunger in New Mexico and help farmers like her increase their in-state production for residents facing food insecurity.

House Bill 207 would require state agencies to work with community and agricultural leaders on a commission tasked with creating an annual plan to decrease food needs.

The commission also would develop an emergency food aid plan to address crises like the coronavirus pandemic, find ways to increase state agencies’ food purchases from New Mexico producers, and identify and assess the quality of public and private meal and nutrition assistance programs.

In New Mexico, some 316,000 people struggle with hunger — 1 in 7 people, and, as Gonzales noted, 1 in 4 children, according to the nonprofit Feeding America.

No one who supports the bill believes it will eradicate hunger. But, they say, the bill could accomplish something that has not been done in New Mexico: create an entity to work on the problem through state law.

“I believe we have one of the best chances of strengthening food security in New Mexico through a process like this bill suggests,” said Pam Roy, executive director of the nonprofit Farm to Table, which works to improve access to locally grown food.

She said pushing cooperation among various agencies — many already engaged in some parts of the bill’s mission — would lead to a better understanding of the barriers to farmers becoming a bigger part of the solution.

The work would include identifying foods sources; setting up necessary infrastructure, such as cold storage facilities for an emergency food bank and produce washing stations; and finding a way to get local farmers’ products to people in need.

The initiative could double the amount of food available to New Mexicans enrolled in the federal Supplemental Nutrition Assistance Program, which would give recipients twice the bang for their buck if they buy local.

When the bill was first introduced in a virtual news conference in February, Rep. Melanie Stansbury, D-Albuquerque, said its sweeping approach was necessary to effectively address New Mexico’s hunger problem.

“We have to fix the entire system,” she said at the time. “From the roots [of the problem] to our food distribution system to the way food is made available in our communities to actually accessing food for individuals and families.”

In a follow-up phone interview, Stansbury, a co-sponsor of the measure, said, “Without having everyone at the table, trying to problem-solve the issue will always be piecemeal.”

She said she believes HB 207 would create a framework for hunger-prevention initiatives that would lead to policy recommendations and budget requests to combat food insecurity.

Stansbury said she experienced food insecurity at times as she was growing up in Albuquerque.

“The economic reality of New Mexicans is when they are struggling, hard decisions like paying the rent or being able to buy groceries come up a lot — that’s food insecurity,” she said.

The bill already has undergone some changes since it was introduced, Stansbury said, and more are coming.

On Tuesday, the House Appropriations and Finance Committee voted to table HB 207 and several other bills requiring funding that could be wrapped into the supplemental appropriations legislation. Rep. Patty Lundstrom, D-Gallup, chairwoman of the committee, said the action doesn’t mean HB 207 has reached its end.

Stansbury said she is confident the initiative will kick off this year.

Nora Meyers Sackett, a spokeswoman for Gov. Michelle Lujan Grisham, wrote in an email the bill’s concept is “one we would welcome as it aligns with the multi-agency work the administration has done over the last two years in collaboration with community partners to address hunger in our state.”

But, she added, “Whether there is an appropriation made to adequately fund the proposal will be the key.”

Several Republican lawmakers on the House Agriculture and Water Resources Committee, which advanced HB 207 last week, said they like its intent, but they expressed concern that its goals are too broad and vague.

“I don’t want anybody to be hungry,” said Rep. Candy Spence Ezzell, R-Roswell, a rancher who recalled times when she could not provide milk for her children. “I’ve been down that road.”

But, she said, pulling in so many people from so many different places — the legislation calls for representatives from at least nine state agencies, the Governor’s Office, tribal governments, nonprofit food groups and the New Mexico Livestock Board, among others — can lead to a situation of “too many people” and “not enough action.”

Cathrynn N. Brown, R-Carlsbad, agreed and said she felt most local communities would prefer to tackle the problem themselves without state government interference.

She called the legislation “the kitchen sink of all kitchen sink bills” because of its sweeping scope. “It’s pointing to more and more government control.”

Lily Irvin Vitela, president and executive director of the public policy group New Mexico First, countered that government agencies working with those in the community struggling with food insecurity would make a difference.

“You fix it [the hunger problem] with political will, with commitment, and with buy-in and an allocation of resources and bringing the brightest and most committed to the table,” she said.

The fact that New Mexico ranks at or near the top of most national rankings when it comes to food insecurity is not a case of “whoops, what an accident,” she said, but a “direct result of public policy. We have to do it better.”

Gonzales said she understands that. She’s known too many people in her community who have gone without food, and she believes the commission that would be created under HB 207 would find there are a lot of small farmers in the state who want to make a difference.

If we could reopen the state and let people go back to work that would help. This is why our state is last in every list except crime. Work on bringing in jobs and educating the kids not indoctrinateing them . Minimum wage was never intended to be a living wage . Wake up and realize that this state is being left behind.

In a recent national report names NM with LA and MS as the states with the greatest child hunger. If you are working and at $7.25 an hour , you are going to run out of money quickly and the kids end up eating cheap, empty protein foods. For those out of a job, are in even worse positions. It is time for the state, (us) lend a hand and feed kids. Hungry kids now are affected the rest of their lives often, creating more social problems. Let's go.

Is it really the purview of the state (or fed for that matter) govt to make sure people have enough food? I certainly dont want anyone to starve, especially kids that have no choice BUT, could we focus just a bit on personal responsibility??

How many parents who cant afford to feed their kids have a $1200 I phone with an monthly plan in excess of $200? How many drive brand new high end SUVs or cars? Cable or Sat tv with all the fixins? How many don't realize that life is all about priorities, whether at $8/hour or $80/hr. Live below your means and learn how to be fiscally respinsuble and then you would find, feeding your kids and yourself is priority #1 behind shelter....Has always been difficult for many since govt provides a crutch and a very bad example of fiscal management....

These people are gonna eat that baby lamb they are sick.