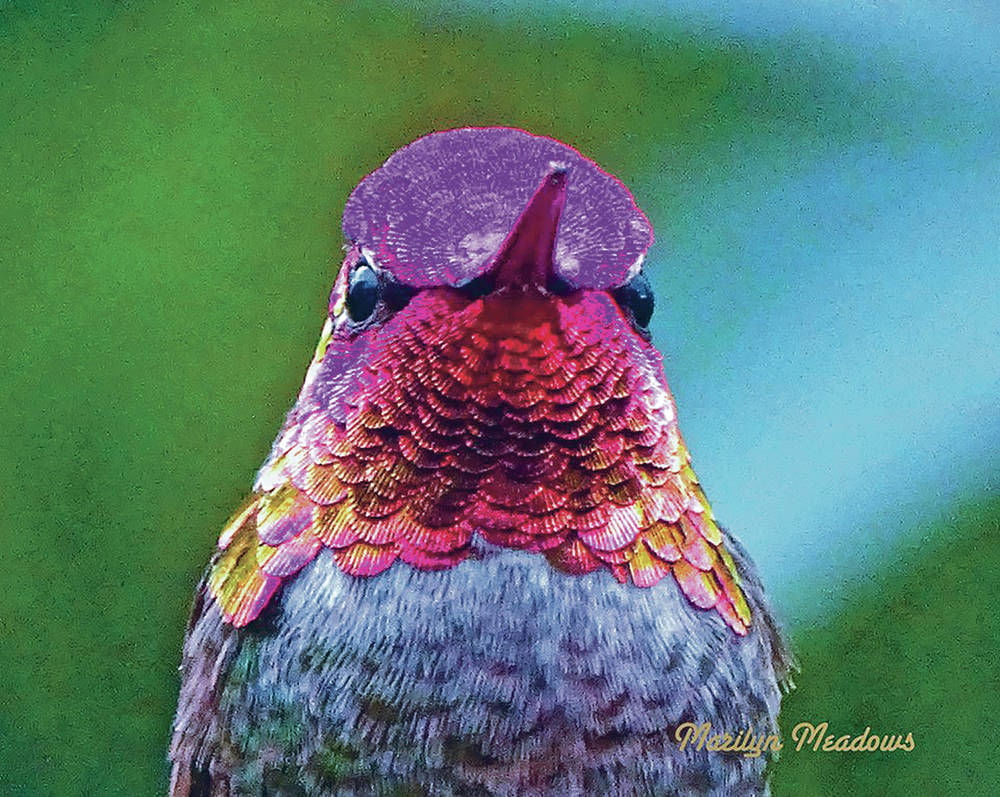 Anna’s hummingbird, found in New Mexico, is one of the first 14 species worldwide whose genome, or its entire hereditary information, has been documented under the new Vertebrate Genomes Project. Courtesy photo

Anna’s hummingbird, found in New Mexico, is one of the first 14 species worldwide whose genome, or its entire hereditary information, has been documented under the new Vertebrate Genomes Project. Courtesy photo

Anna’s hummingbird, a unique creature that can be found in the Land of Enchantment and is named for an Italian duchess, was among the first species whose genomes — or whole hereditary background — were mapped by the Vertebrate Genome Project.

Though Anna’s hummingbird is not in danger of extinction, many other species are, and Jon Hayes, executive director of Audubon New Mexico, says the project is valuable as the issue of biodiversity becomes more important.

“I see a huge value in pure science for the sake of science,” Hayes said of the project.

Anna’s hummingbird was named by René Primevére Lesson in 1829, based on specimens owned by the Duke and Duchess of Rivoli and named for Duchess Anna de Belle Masséna Gould, according to the Birds of North America website.

Anna’s hummingbird, which has been expanding its range since the 1950s, can be found in parts of southwestern, south-central and north-central New Mexico, according to the Cornell Lab of Ornithology.

“It’s definitely one that folks look for,” said Hayes of the hummingbird, most often found in New Mexico during the fall and winter.

Anna’s hummingbird is distinctive: Males have “elaborate dive displays” to attract attention, ascending more than 100 feet at times before plummeting toward their targets, whether it’s a female Anna’s hummingbird or another bird, according to the Birds of North America website.

The project is important, Hayes said, because understanding the genetic makeup of a species may help scientists understand why some survive and others don’t.

The project — part of another effort called Genome 10K, a consortium of more than 200 genome scientists and biologists from 101 institutions and 20 countries — allows scientists to build a baseline understanding of the hummingbird genome so it can be compared with other species.

Genome 10K is chaired by Erich Jarvis, whose interest in genomes evolved from his research on vocal learning, said spokeswoman Sadye Paez. Only eight vertebrate orders, or biological classifications of organisms, have vocal learning, and three of those are birds: songbirds, hummingbirds and parrots. “The Anna’s hummingbird is the most studied hummingbird for vocal learning,” Paez said.

Eventually, the aim of the Vertebrate Genome Project is to create a map for all “66,000 vertebrate species on the Earth to address fundamental questions in biology, conservation and disease,” Paez said.

“For conservation,” Paez added, “one of the goals is to identify species most genetically at risk for extinction and to preserve genetic information of life.”

It takes about one to three months to sequence each genome, and the methods used for the first genomes released “will now be scaled up” and new technologies will assessed for all phases of the project. In comparison, “the first human genome took 13 years to complete,” Paez said.

It’s estimated it will take about 10 years to complete the genomes for all 66,000 species. Prior scientific efforts to map genomes resulted in errors, but a combination of newer technologies, including the use of algorithms, has minimized mistakes, Paez said.

“The Anna’s hummingbird was one of the species that we tested all of the technologies on during the three-year period that the [Genome 10K] community worked with industry partners to identify the best approach to generate the VGP genomes,” Paez said.

The project points to how genomes were used to try to keep the endangered California condor from extinction. The condor, the largest land bird in North America, was close to being wiped out in the last century. At one point, only 22 were thought to exist worldwide.