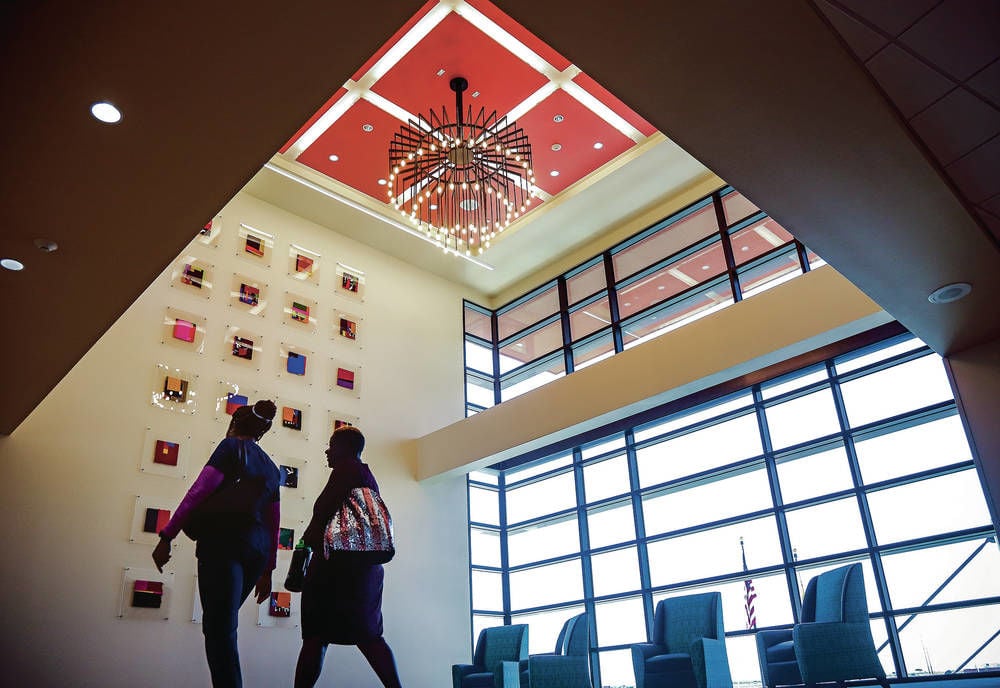 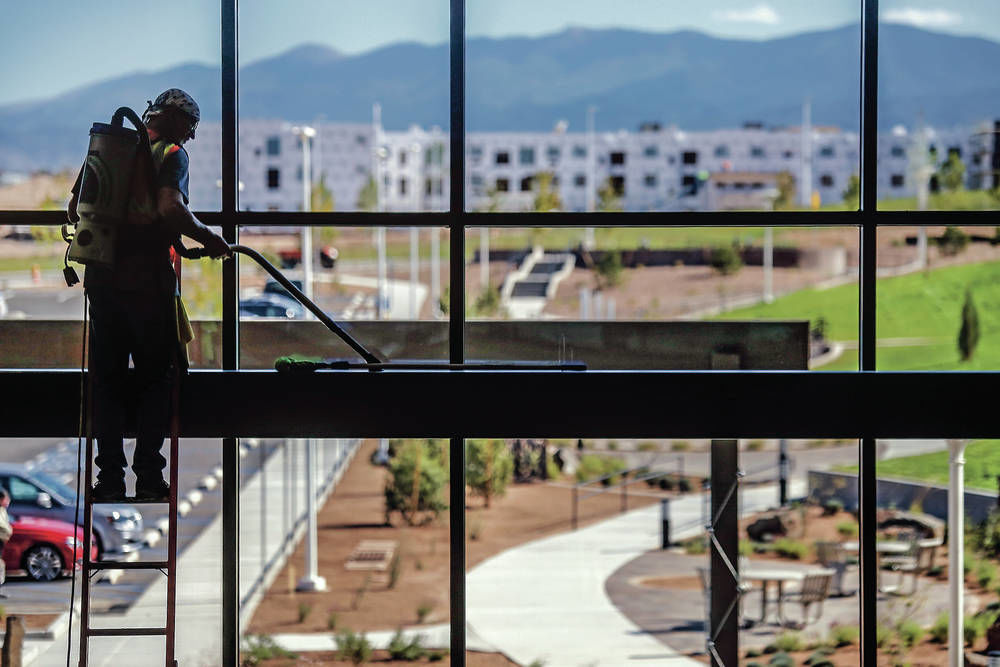 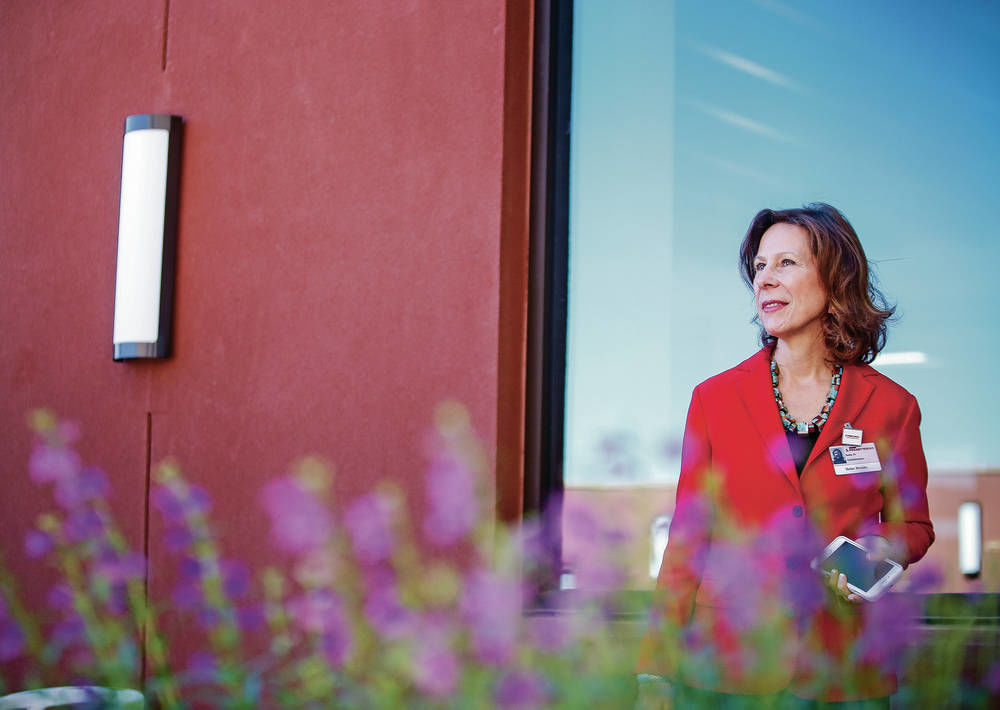 Helen Brooks, CEO of the new Presbyterian Santa Fe Medical Center, pauses Friday during the tour of the Richard H. and Scottie Pierce Terrace of Blessing and Joy. The best compliment she’s heard so far, she said, is that ‘it doesn’t feel like a hospital.’ Gabriela Campos/The New Mexican 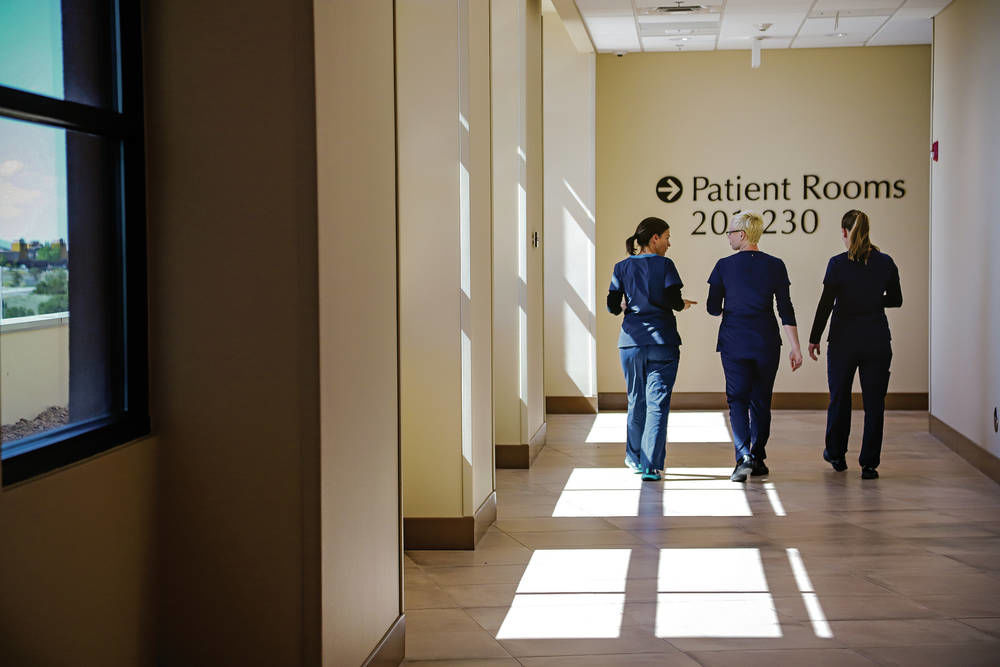 Helen Brooks, CEO of the new Presbyterian Santa Fe Medical Center, pauses Friday during the tour of the Richard H. and Scottie Pierce Terrace of Blessing and Joy. The best compliment she’s heard so far, she said, is that ‘it doesn’t feel like a hospital.’ Gabriela Campos/The New Mexican

Architect John Laur said he visited hospitals around the country before coming up with a final plan for the Presbyterian Santa Fe Medical Center.

He looked for what works in hospital designs and what doesn’t, he said Friday during a media tour of the $145 million medical center. It’s scheduled to open for business Oct. 1, two years after construction began. An open house celebration with tours, entertainment and free flu shots is scheduled Sept. 22 to introduce the facility to the public.

What Laur’s firm, Albuquerque-based Dekker/Perich/Sabatini, produced blends nature, hospitality and an interior design that Laur said allows people to know intuitively where they are inside the building.

Visitors may be forgiven for mistaking it for a hotel.

“Hospitality, it’s exactly where it’s headed,” Laur said. “It’s been headed in that direction for a long time because the days of it being a sterile environment [are coming to an end], as opposed to an environment which is more hospitable towards healing and comfort and having people feel less anxious. That’s what we tried to do.”

Hence the 342,000-square-foot, three-story building comes with acres of windows that allow in copious amounts of natural light and views of the Sangre de Cristo Mountains, a color scheme that emphasizes earth tones, large rooms to accommodate family visits and, hanging from nearly every wall, art by New Mexico artists.

The design also evolved from that of Presbyterian Rust Medical Center in Rio Rancho, Laur said.

The building is structured to promote healing and wellness, said Helen Brooks, the medical center’s CEO. The best compliment she’s heard so far is that “it doesn’t feel like a hospital.”

At the center is an open, high-ceiling common area with a fireplace adjacent to a cafeteria that will be open to the public. The space serves as the hospital’s dining area.

The building is divided into inpatient and outpatient wings. The south wing, the outpatient side, houses the Physicians Office Building with specialists grouped together. The second floor is the women’s and children’s area, for instance, with rehabilitation and other specialties on the floor below.

The third floor on both wings is a shell to be built out as the hospital expands.

In addition to hiring its own staff of 36 providers, Presbyterian Healthcare Services, the hospital’s nonprofit parent organization, contracts with some specialists — such as radiologists and anesthesiologists — and leases space to others inside the office building, said Dr. Anne Foster, Presbyterian Santa Fe’s chief medical officer.

On the inpatient side, the west wing, are 30 private rooms, four surgical suites, laboratory and imaging services, administrative offices and other services. The urgent care and emergency departments are side by side at the entrance facing Beckner Road.

Two more surgical suites will be located in a birthing center scheduled to open in early 2019.

The inpatient rooms are large enough to accommodate the biggest of Northern New Mexico families, Brooks and Laur said. They are equipped with lifts over the beds and visitor benches that convert to pull-out beds.

Laur said lessons learned at the Presbyterian hospital in Española were incorporated into the Santa Fe hospital design.

“We had a situation in Española where the family was so big that we got a call saying the breakers were tripping in the waiting area because they were bringing in hot plates and literally camping out,” he said.

Hospital patients will have access to computer tablets so they can track their treatment and find information about the hospital.

Two of the surgical suites in the medical center have laminar air flow, meaning the air flows steadily out of the room to prevent contaminants from entering. The areas are equipped with screens that permit a surgeon, using camera-equipped instruments, to conduct laparoscopic surgery, or operate on a patient with no more than a small incision.

Each surgery area also is equipped with its own “pharmacy,” a controlled-access chest of drugs commonly used during surgery. It increases the safety factor in surgical drug use and alleviates the need for a separate, costlier surgical pharmacy, said Dr. Benjamin Rieff of Anesthesia Associates of New Mexico, a Presbyterian contractor.

What: Presbyterian Santa Fe Medical Center’s “Party in the Park,” a free festival to celebrate the opening of the hospital, with live music, food trucks, free box lunches and flu shots, prizes and hospital tours

Where: 4801 Beckner Road; parking off-site at Santa Fe Place mall, Capital High School and Santa Fe Community College, with shuttle service to and from the event