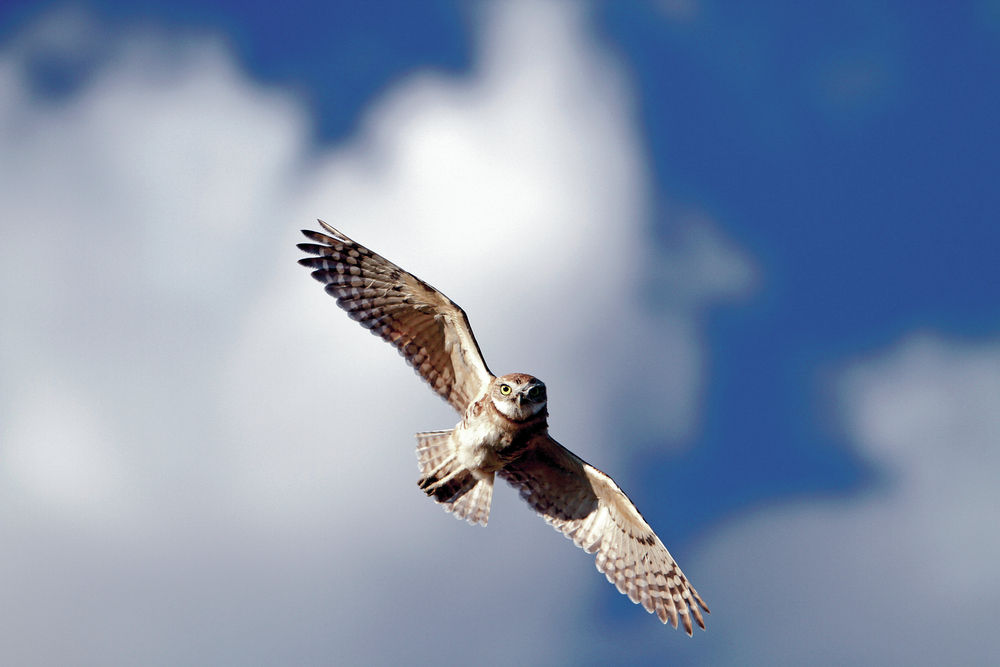 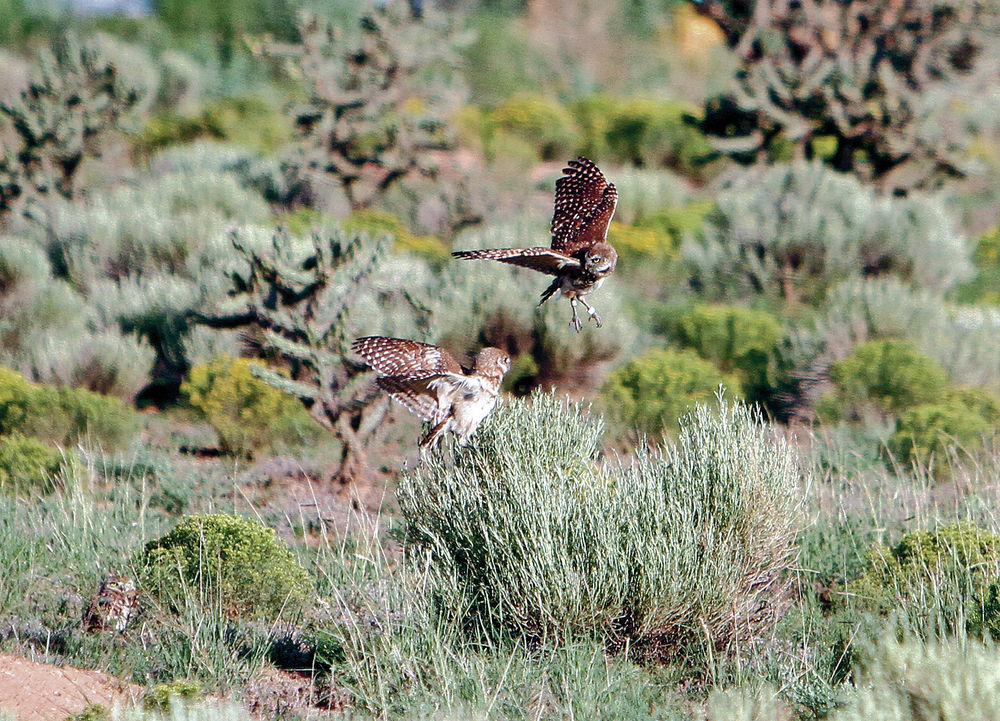 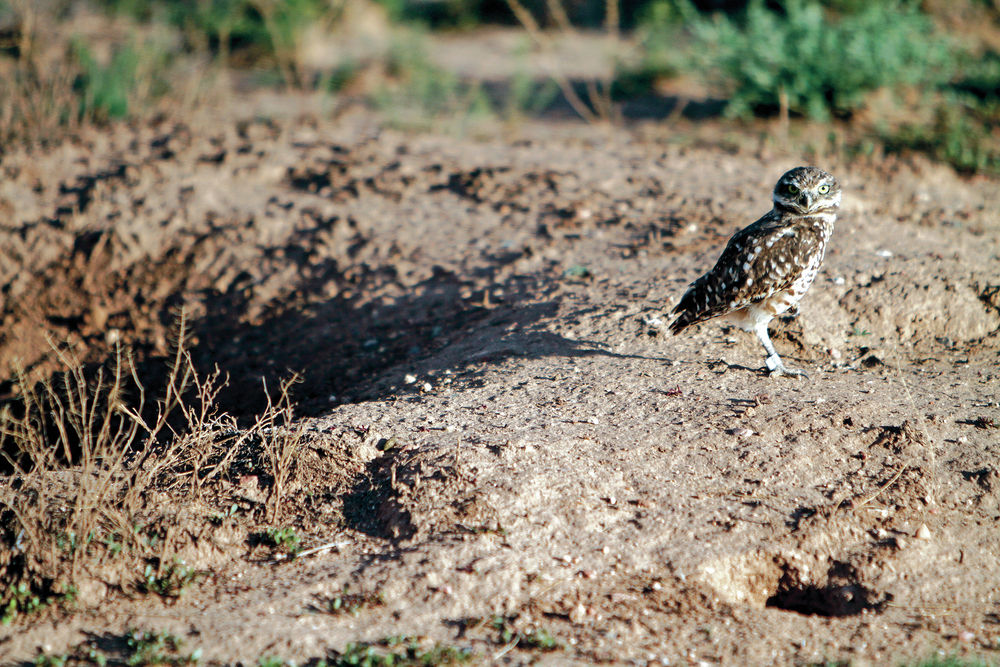 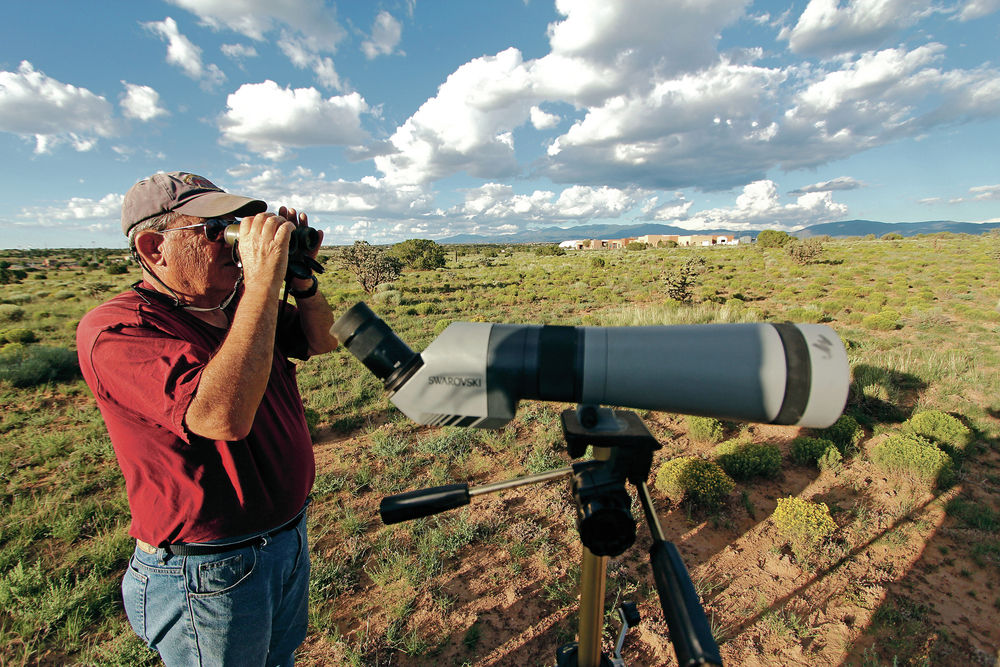 Jim Walters of Santa Fe, a burrowing owl champion, watches at owls that have taken over old prairie dog holes near the Santa Fe animal shelter. Walters, a retired national park wilderness manager, is deeply worried about the little owls. ‘This is the last viable population near the city,’ he says. Luis Sánchez Saturno/The New Mexican

Jim Walters of Santa Fe, a burrowing owl champion, watches at owls that have taken over old prairie dog holes near the Santa Fe animal shelter. Walters, a retired national park wilderness manager, is deeply worried about the little owls. ‘This is the last viable population near the city,’ he says. Luis Sánchez Saturno/The New Mexican

The fledgling burrowing owls lift off and hover over their ground nests near the Santa Fe Animal Shelter & Humane Society on Caja del Rio Road.

One stands on the edge of the abandoned prairie dog hole that serves as its home and swivels its head, its big golden eyes checking for danger. When the little owl flaps its wings and sweeps into the air, it catches the wind, balancing there for a moment between earth and a sunset sky.

Walters is deeply worried about the little owls. “This is the last viable population near the city,” he says.

Walters walks all around the county, looking first for prairie dog colonies and then checking to see if any of the holes have burrowing owls. It’s a labor of love. He doesn’t get paid for his efforts.

In 2008, he counted 68 breeding pairs of burrowing owls around the county and city. They were along Caja del Rio, at the Santa Fe Municipal Airport and in some parks. “Today, we only have four successful nests,” Walters says. “These birds are declining. It is important for Santa Feans to know we are losing all our burrowing owls.”

Another nest failed because the breeding pair disappeared before any hatchlings were born.

Walters believes the owls’ numbers are declining as prairie dogs are removed and their holes covered over. “It is the same story over and over,” he says. “If you want to destroy wildlife, destroy their habitat.”

Walters says the burrowing owls have survived well at the Santa Fe animal shelter site because they are protected by the shelter staff.

Burrowing owls are only 7 to 10 inches tall, with long legs and white brows over their bright, yellow eyes. An adult female begins laying eggs in a prairie-dog burrow in April. She lays seven to nine eggs, one a day. The eggs hatch one at a time after about 30 days. “It can be a cruel world. The last of the nestlings to hatch can be killed by the older and stronger ones,” Walters says.

“It is a tough life for these birds. It helps to hatch first so you have first dibs on the food,” he adds.

The fledglings mature within a few weeks and begin flying, but the family stays together until they start migrating south at the end of August, Walters says. “The fledglings still need adult protection.”

The owl’s diet has a lot of variety. It will dine on deer mice, crickets, kangaroo rats, centipedes, June bugs and lizards, Walters says.

Loss of prairie dog colonies and development are the biggest threats to the owl. The owl’s petite size also makes it a popular morsel for predators such as coyotes, hawks, reptiles and house cats.

Walters and a friend spent several July nights trapping and banding 28 fledgling burrowing owls at the four sites around the county. This is the first year they’ve banded the birds. Walters hopes now to track them as they mature and migrate south. “We really don’t know where they go at this point,” he says.

Walters credits the animal shelter and its executive director, Mary Martin, for protecting one space where the prairie dogs and owls live.

“For me, it was a no-brainer,” Martin said. “It’s a space we don’t use for the dogs and cats. It made perfect sense to protect the owls. Everyone has enjoyed the heck out of it.”

Martin said they wouldn’t have known about the owls living there if Walters hadn’t brought it to their attention. “We’ve learned a ton from him,” she said.

Walters says the No. 1 thing the city and county could do to help the burrowing owls is to protect prairie dog colonies.

People can help the burrowing owls by looking for them in the spring and summer near prairie dog colonies. If they spot one, they are encouraged to fill out a form at www.nmburrowingowl.com/meetings.html and send it to the New Mexico Burrowing Owl Working Group.

I am grateful that this is getting visibility as this sadly is happening throughout the West as we destroy colonies of prairie dogs with zero consideration for the broader impact. Greed for land is our main problem. Spread the word and let's protect the heritage of place for future generations of wild things as well as people.

Good piece. Walters knows his stuff. Without his personal dedication and efforts, I suspect these owls would soon disappear in Santa Fe County.