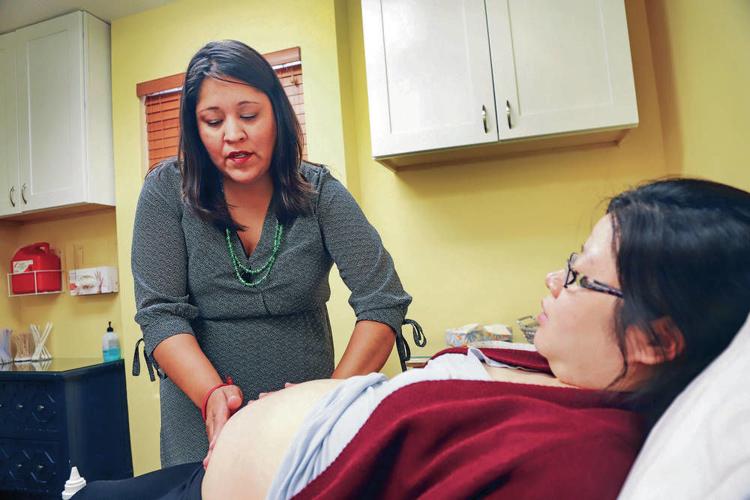 Nicolle Gonzales, a certified nurse midwife, examines a patient to determine the location of the her 29-week-old baby. Gonzales is working toward opening a birthing clinic in Pojoaque. “We’re centering Native women, we’re centering women with Medicaid insurance, underinsured, or no insurance because normally it’s not accessible to get care like that.” Gabriela Campos/The New Mexican 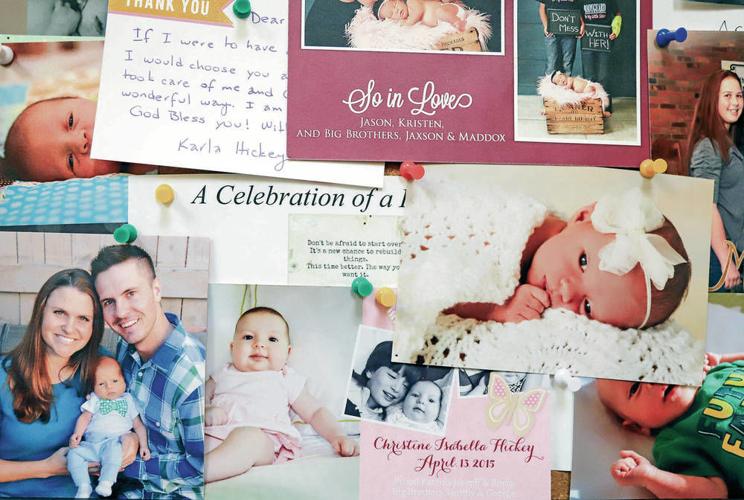 Nurse midwife Nicolle Gonzales’ bulletin board shows pictures of babies she has delivered in her office in Los Alamos. Gonzales has delivered 360 babies over the past seven years. Gabriela Campos/The New Mexican 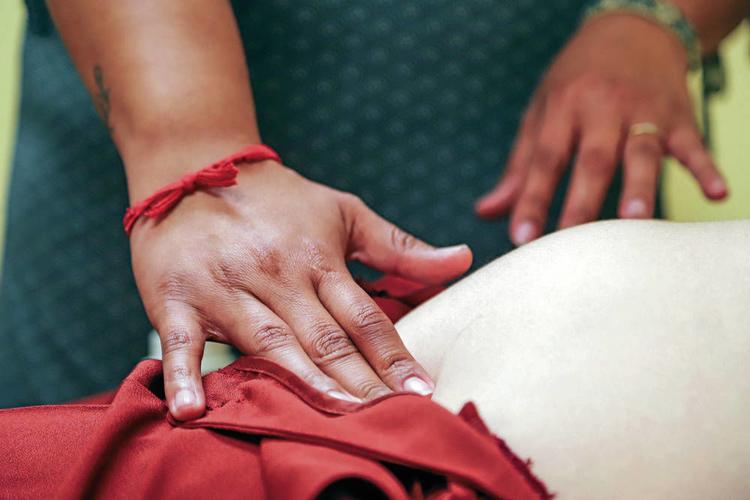 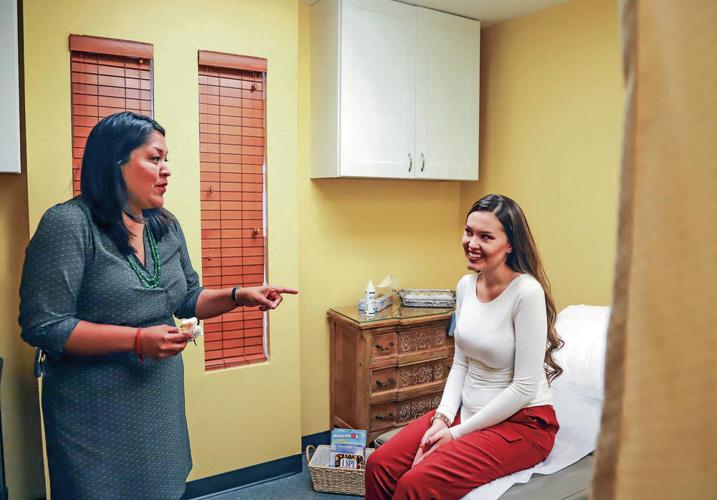 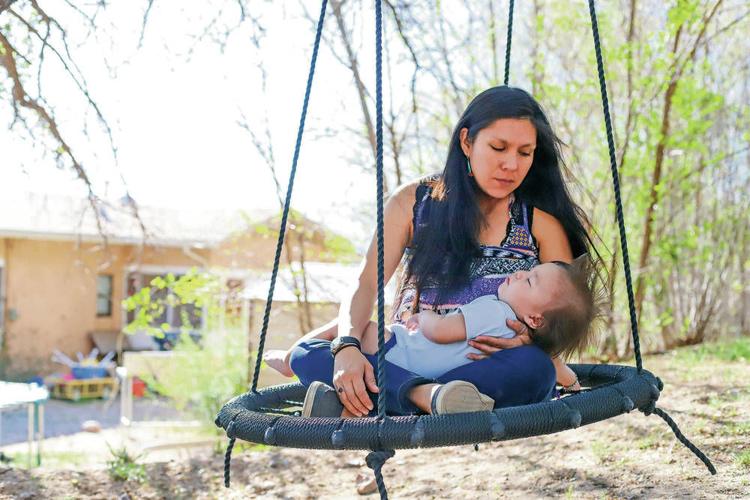 MaryAgnes Talache, community doula and pregnancy and birth support advocate for Tewa Women United, holds her 15-month-old son Jingim Ray Garcia after a nap outside their home in Nambe. Talache is the board chair for the Changing Woman Initiative, a nonprofit working toward opening a birthing center in Pojoaque focused on Native women and traditional birthing practices. Gabriela Campos/The New Mexican 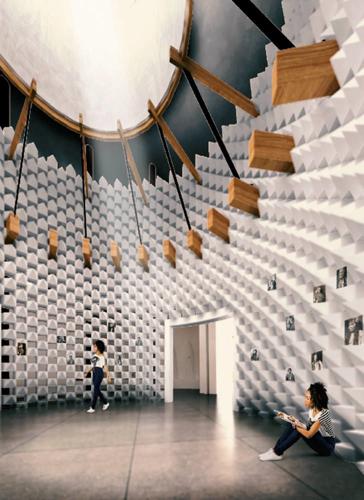 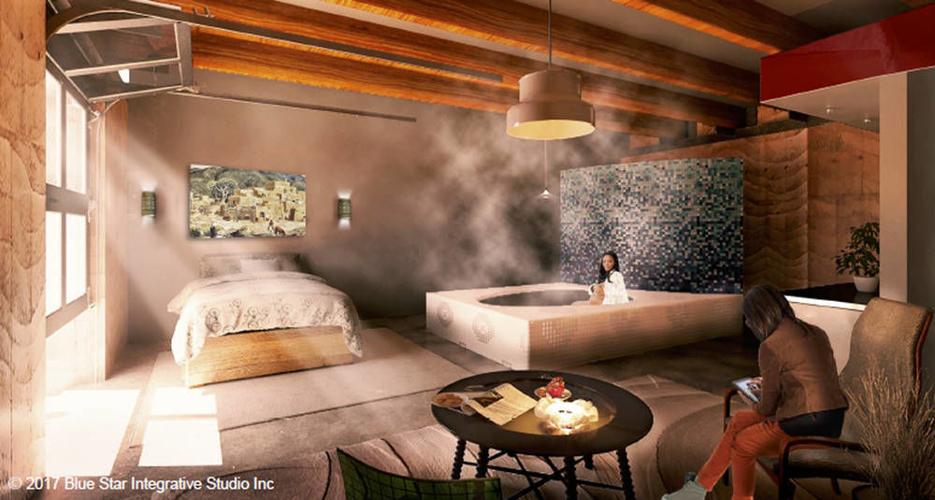 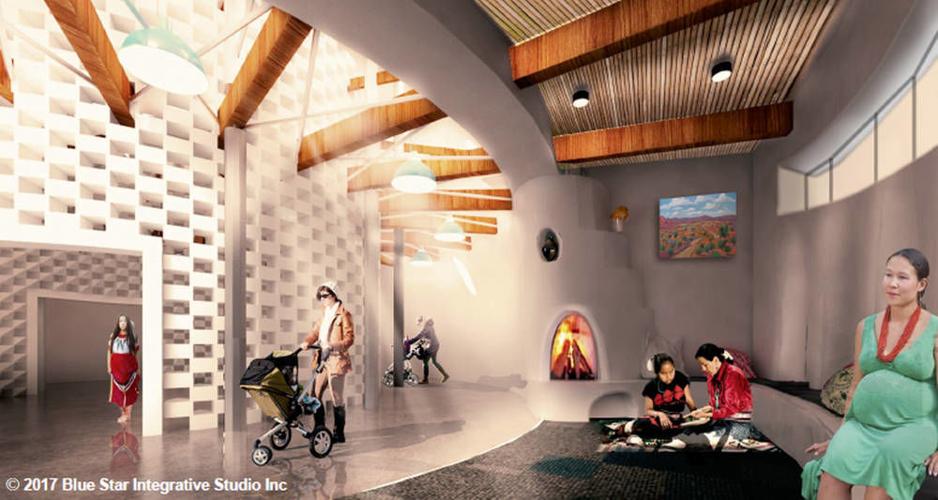 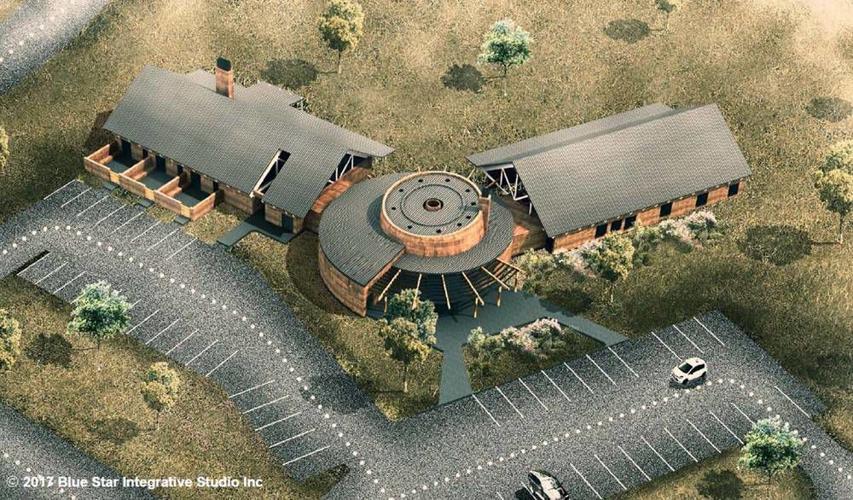 Nicolle Gonzales, a certified nurse midwife, examines a patient to determine the location of the her 29-week-old baby. Gonzales is working toward opening a birthing clinic in Pojoaque. “We’re centering Native women, we’re centering women with Medicaid insurance, underinsured, or no insurance because normally it’s not accessible to get care like that.” Gabriela Campos/The New Mexican

Nurse midwife Nicolle Gonzales’ bulletin board shows pictures of babies she has delivered in her office in Los Alamos. Gonzales has delivered 360 babies over the past seven years. Gabriela Campos/The New Mexican

MaryAgnes Talache, community doula and pregnancy and birth support advocate for Tewa Women United, holds her 15-month-old son Jingim Ray Garcia after a nap outside their home in Nambe. Talache is the board chair for the Changing Woman Initiative, a nonprofit working toward opening a birthing center in Pojoaque focused on Native women and traditional birthing practices. Gabriela Campos/The New Mexican

Emily Haozous came face to face with a troubling circumstance as she prepared to give birth to her son in 2007: The Santa Fe Indian Hospital, where she had received care for most of her life, had shuttered its childbirth services.

A graduate student at the time, Haozous, a member of the Fort Sill Apache Tribe, had no health insurance. Following her prenatal care through the federal Indian Health Service at the Santa Fe facility, she had to decide where she would deliver her infant — and how to cover the costs.

She and her husband opted to pay $2,000 out of pocket for a home birth.

“It really was eye-opening,” said Haozous, a Santa Fe resident who now holds a doctorate in nursing and is an associate professor of nursing at The University of New Mexico. “… It’s not like we had fountains of money falling out of the sky.”

MaryAgnes Talache of Nambe Pueblo, a mother of five children and pregnant with her sixth, also faced tough choices when the Indian Hospital closed its birthing unit. Each of her first four children was born in a different medical facility. And then, like Haozous, she chose to deliver her youngest child at home and plans a second home birth in the coming months.

She said she prefers the intimate experience of giving birth in a familiar environment to the commotion of delivering an infant in a hospital, which can be disconcerting or even traumatic — especially for Native women from remote communities who aren’t certain of their rights as a patient.

Talache and Haozous are among a small but growing number of Native mothers who have been turning to midwives and exploring delivery options such as birthing centers and home births, where they have a greater voice in their own care.

Both also are board members of a local nonprofit that aims to broaden birthing choices and improve health care for Native women in Northern New Mexico, with a particular focus on reviving cultural traditions in danger of becoming lost after decades of increasingly medicalized prenatal care and childbirth.

The Changing Woman Initiative is the brainchild of Nicolle Gonzales, 38, a member of the Navajo Nation and a nurse midwife who lives in San Ildefonso Pueblo. She graduated in 2011 from UNM’s master-level nurse midwife program — rated among the top 10 in the nation by U.S. News and World Report — and started the nonprofit about five years ago with a goal of opening the nation’s first Native birthing center sometime next year.

She hopes to create a venue that integrates ancient tribal birthing practices and breaks down barriers to care for all women in a region with a high rate of poverty: limited transportation, food insecurity, lack of awareness of prenatal care and high costs.

She’s determined to serve Medicaid patients and those who are uninsured or underinsured.

“My goal is to have people not pay out of pocket,” Gonzales said.

Gonzales was driven to launch the project by what she observed in her work as a nurse midwife, and as a registered nurse years before. “I saw the differences in care Native women received” through the Indian Health Service, which more than 2 million American Indians and Alaska Natives rely on for their care, she said. Facilities were outdated, she said, and women weren’t offered choices.

“Native women, because they’re a vulnerable population, they didn’t ask a lot of questions,” Gonzales said

Gonzales also was informed by her own experience with childbirth.

“There was no talk about my role as a mother, introducing my traditions into the birth process,” she said. “… When I started to learn about those traditions in our community and our history, it was really amazing to hear about the rich history of birthing in our Native communities, and how our Native women used to birth in hogans surrounded by our family, talking to our babies in our Native language first, cleansing the space in a ceremonial cleansing before the baby came, and then after.”

Gonzales sees the Changing Woman Initiative as an opportunity to build not just a birthing center focused on the needs of Native women but a women’s health model for tribal communities nationwide.

Talache, chairwoman of the Changing Woman board, said she believes there’s a great need for the project.

“I think if we can bring back our traditional teachings and bring back the natural way [of giving birth],” she said, “we would have a better outcome.”

The organization’s name is rooted in Navajo culture, Gonzales said, explaining that Changing Woman “is a deity which takes care of all women. She also represents transformation. A lot of our ceremonies reflect her in some form. She helps rebalance the male and female energy.”

The birth center will offer a full range of services for children and women of all ages, she said. “Every stage of a woman’s life is a transformation.”

The facility, estimated at $7 million, is still in the fundraising stage but has the support of an architect experienced in working with New Mexico pueblos.

Scott Moore y Medina, director and principal architect of Tulsa, Okla.-based Blue Star Integrative Studio Inc., has family roots in Northern New Mexico and lived there for more than a decade. The focus of his firm, which has offices in Albuquerque and Berkeley, Calif., is “catalytic” community projects in “rural, tribal, under-resourced” areas, he said.

He met Gonzales, who he described as energetic, driven and “laser-focused,” through his partner, Apollonia Piña, a woman with Muskogee and Mexican heritage who has similar interests in women’s health. Piña encouraged him to get involved in the birthing center project, Moore y Medina said.

He and Gonzales had their first face-to-face meeting at Standing Rock, where she was assisting with medical services in tents at the North Dakota camp, where thousands of people were protesting an oil pipeline project.

Since then, he said, “She’s been one of my favorite collaborators. … She is going to succeed.”

Changing Woman has a committed leader and a strong board, Moore y Medina said, and has drawn interest nationally, through funders and news sites focused on Native American issues and women’s health, as well as more mainstream venues like Huffington Post — “all great indicators of future success,” Moore y Medina said.

So far, the nonprofit has raised more than $400,000 from several organizations: Every Mother Counts, the NoVo Foundation, the Kellogg Foundation, the Groundswell Fund and the Shine Foundation.

Blue Star has created fundraising materials to help support the effort, with concept designs showing the future birthing center, a space he believes women would feel “nurtured and cared for, just by how the room wraps around you.”

In the meantime, Gonzales hopes to launch a one-day-a-week free clinic in Pojoaque in August.

Moore y Medina admires how Gonzales works to find the right balance of care for Native women “at the intersection of Western medicine and traditional practices.”

Just over a year ago, he said, Piña gave birth to the couple’s first child, José Valentino Piña y Moore. They had planned a home birth, incorporating cultural birthing traditions, but ended up in a hospital.

The change in plans didn’t stop the couple from bringing their own practices into the birth, he said, but it made clear to him how many Native women would be too intimidated in a hospital environment to conduct a ritual or ceremony, or to use a remedy made from local flora.

Gonzales, he said, is “holding a space for reconnection” to heritage, for protecting tribal knowledge that is under threat of becoming lost.

“I don’t know how else to hold on to that,” Moore y Medina said. “We’ve got to get this thing built somehow.”

Be a thoughtful guest at summer gatherings

Fires have an impact on more than forests in N.M.