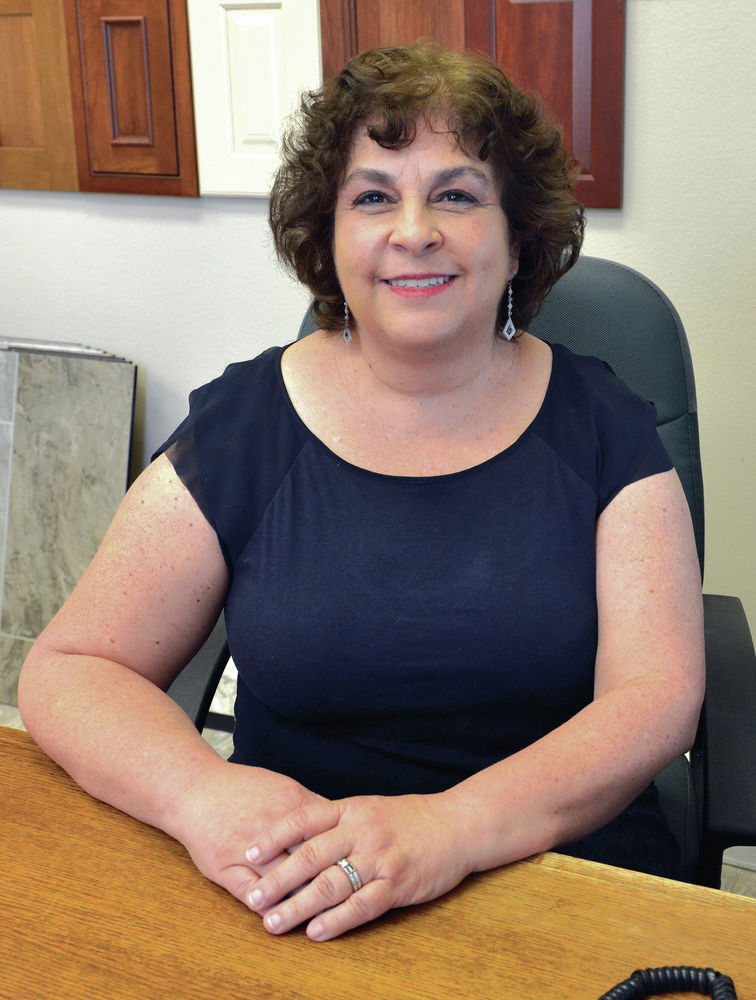 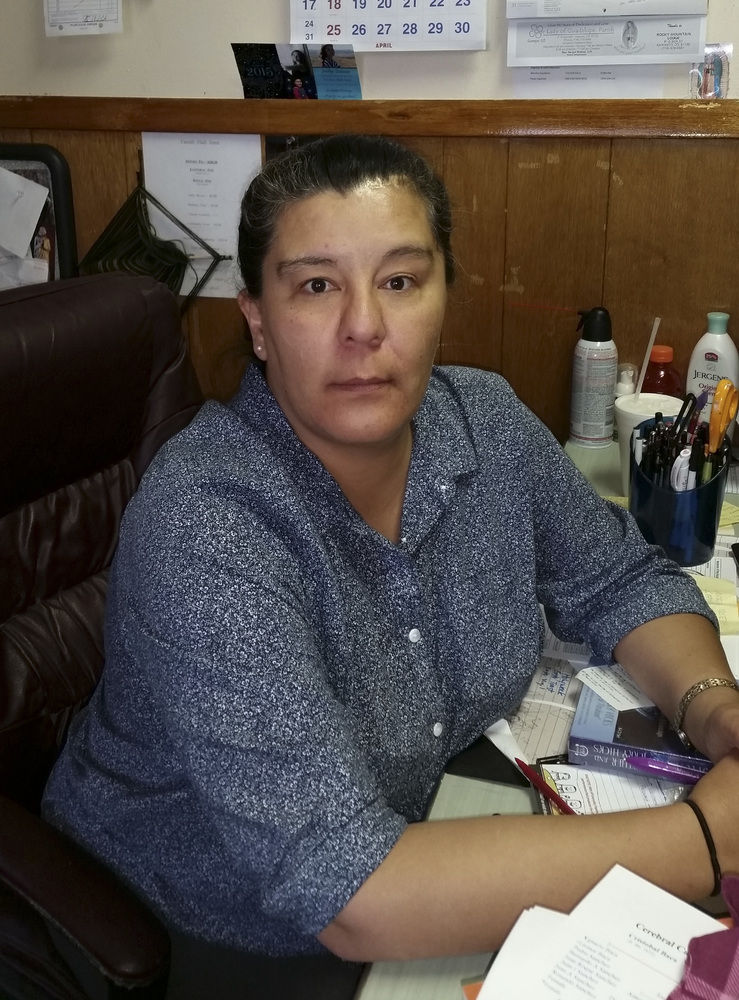 Paula Espinosa of Antonito, Colo., tested positive about three years ago, but she had long suspected she had the disease. Courtesy photo

A cavernous angioma of a patient with cavernous cerebral malformation. Courtesy Dr. Leslie Morrison via fronterasdesk.org

Paula Espinosa of Antonito, Colo., tested positive about three years ago, but she had long suspected she had the disease. Courtesy photo

It began with tingling from her pinkie finger to her elbow. Pins and needles. Sometimes she felt like her arm was burning.

The sensations recurred every few years for more than a decade. Doctors were confounded.

Finally in 2004, an Albuquerque neurosurgeon told Joyce Gonzales that she had cavernous cerebral malformation, a genetic blood vessel disease affecting the brain and spinal cord that was common among Spanish settlers of the Southwest and now is haunting their descendants.

Gonzales, 57, of Santa Fe can trace her family in New Mexico back nearly 400 years to Cristobal Baca, a farmer and settler who was born around 1635, and his wife, Ana Moreno Lara. Baca, who owned lands in Bernalillo, died in El Paso after the Pueblo Revolt. His children moved back to the Santa Fe area after its reconquest. Two of their sons apparently inherited the mutated gene, CCM1.

Gonzales’ mother and four of her siblings also had cavernous cerebral malformation. In Gonzales’ generation of the family, at least 10 people have tested positive for the disease. In 2009, her cousin’s daughter died of it. She was only 9 years old.

Last week, members of the New Mexico congressional delegation reintroduced a bill that would expand research on the treatment and prevention of the disease, which can cause severe headaches, neurological deficits, seizures, stroke, skin and retinal lesions, and sudden death.

But winning federal funding for a disease that afflicts a small slice of the country’s population has been difficult. Similar bills failed to gain traction in 2012 and 2013.

University of New Mexico School of Medicine neurologist Dr. Leslie Morrison has been treating patients with the disorder for years. She said the bill will provide funds for the large clinical trials necessary to find a cure.

Moreover, she said, cavernous cerebral malformation weaves together both the history of New Mexico and a serious public health concern. “We really need to find a treatment,” she said. “This is uniquely important to New Mexico.”

Gonzales feels lucky. Both of her own children have been tested, and they do not have the mutation, which makes her think, “I hit the jackpot.”

But she herself has not been so fortunate. In 2004, Dr. Robert F. Spetzler, who specializes in rare and difficult-to-treat diseases at the Barrow Neurological Institute in Phoenix, surgically removed the angioma from her neck that was causing the brain bleeds and her symptoms.

A legacy of CCM

Joyce Gonzales of Santa Fe can trace her family in New Mexico back nearly 400 years. In Gonzales’ generation of the family, at least 10 people have tested positive for cavernous cerebral malformation. In 2009, her cousin’s daughter died of it. She was only 9 years old.

According to Gonzales, she has 40 more lesions in her brain, but “they’re behaving, and I’ll take that.”

In announcing their latest legislation last week, New Mexico’s congressional delegates said an estimated 1.5 million people in the United States suffer from cavernous cerebral malformation, and the disease is more prevalent among New Mexicans than any other population in the world.

“Sadly cerebral cavernous malformation is difficult to diagnose and has few treatment options, but this bill is an important step along the path toward developing a cure for the New Mexicans and their families who suffer from this disease,” Sen. Tom Udall, D-N.M., said in the statement.

Henrietta Christmas, a New Mexico genealogist, said many of the descendants of the state’s old dynasties come from the Baca/Lara line. “If you’re fifth-generation New Mexican, you probably come from this family,” she said, although she urged such people not to be alarmed.

“Consult a doctor and get a test instead of looking at a genealogy chart,” she said.

The new bill directs the heads of the National Institutes of Health, the Centers for Disease Control and Prevention and the U.S. Food and Drug Administration to support creation of three national research centers that would collaborate on clinical drug trials. The legislation also calls for the U.S. Department of Health and Human Services to expand training for clinicians and scientists and award grants for surveillance and epidemiology.

One of the new research centers is likely to be at The University of New Mexico School of Medicine, where Morrison is based.

She mainly addresses patients’ symptoms, such as headaches and seizures. Surgery can only help if the person is symptomatic and has accessible lesions. But, she said, “That leaves a lot without really good treatment.”

She said the bill could expedite the research currently been done in nonhuman models and “bring it to the bedside.”

Morrison has diagnosed cavernous cerebral malformation in many members of the family of Paula Espinosa of Antonito, Colo.

Espinosa tested positive about three years ago, but she had long suspected she had the disease. She had lesions removed from her foot in 1995 and from her brain in 1999 by a doctor who called her condition vascular malformation. Last December, she had another tumor removed from her right foot and suffers significant nerve damage as a result.

Espinosa, who had to give up working as a science teacher, has severe headaches and frequent TIAs, or mini-strokes.

She has not had children. “I figure I’m going to stop this before it spreads somewhere else,” she said.

Morrison also has been treating the family of Devin Rios, 24, of Santa Fe. He has been diagnosed with cavernous cerebral malformation, along with his father, his sister and a brother.

Rios said he had been experiencing numbness and tingling in his arm. At age 18, he was hit while playing a sport, and his neck filled with blood. “It came out of nowhere and was trying to eat my brain,” he said.

According to Rios, he no longer has much fine motor coordination in his left arm despite occupational therapy. Other members of his family experience periodic seizures.

Cavernous cerebral malformation has been particularly devastating to the family of Tim Gallegos, whose daughter, Jenae, died of the disease 10 years ago.

“We had no clue that our daughter had this illness,” Gallegos said. Jenae was a bubbly, athletic girl, her father recalled. On the last day of school, she came home sick. He thought she had the flu and would be better in the morning, but during the night she had a hemorrhage near her brain stem and later passed away.

Months later, Gallegos’ son was diagnosed with the disease. The 13-year-old has periodic seizures but is doing well now.

“But every time he has a headache, it’s a cause for worry,” Gallegos said.

Cerebral cavernous malformations are collections of blood vessels in the brain that are enlarged. With abnormally thin walls, they are prone to leakages and can occur anywhere in the body, although there are usually more symptoms when they are in the brain or spinal column.

The disease appears in two forms, familial and sporadic. The family form, which is most common in New Mexico, is passed from parent to child. It is caused by mutations in at least three genes known as CCM1, CCM2 and CCM3. If one parent has the disease, each of their children has a 50 percent chance of inheriting it. The risk rises if both parents are affected. But if a fetus inherited the mutated gene from both parents, it probably would not survive, Morrison said, which might account for the large number of miscarriages in the family trees.

The disease more often occurs sporadically. For example, Spanish cyclist Alberto Contador, who collapsed with seizures during a 2004 race, is believed to have that kind. He is unlikely to have had the common Hispanic gene mutation, Morrison said.

Morrison said her patients include those with anywhere from 0 to 800 lesions. The most common problems they report are either focal seizures (or partial seizures) and severe headaches, as well as acute neurological deterioration and stroke-like episodes caused by hemorrhages.

“The way it looks depends on where it is located,” Morrison said.

Many other patients are asymptomatic and have only discovered they have the gene mutation because they have a family history and have been tested. Blood tests, MRIs and saliva can be used to learn if a person has cerebral cavernous malformation.

Morrison has enrolled almost 300 patients in her ongoing study, but “we know there are thousands who have this mutation in the Southwest region,” she said.

There are some promising drugs designed for other diseases that might be effective, Morrison said, although some are not licensed by the U.S. Food and Drug Administration.

Eleven of her patients are enrolled in a study that measures the effect of Zocor, the brand name of the cholesterol drug simvastatin, on cavernous cerebral malformation. The study tracks changes on MRI scans showing the leakiness of malformations.

Simvastatin is one of three drugs that have been shown to be effective in mouse models. There are two other drugs used to treat subarachnoid hemorrhages and diseases like Alzheimer’s, which also have been effective in mice with the mutated gene.

Another part of the study is showing a correlation between the number of large lesions (half a centimeter or more) and the severity of the disease.

Morrison’s clinic has a grant from the National Institute of Neurological Disorders and Stroke, which has just been renewed for another five years.

She also has a grant for patient communication from the federal Patient Protection and Affordable Care Act of 2010.

Morrison considers the clinic to be fortunate to have federal funding, but it’s not enough for clinical trials, and the staff has just been “trying to cobble together something for our patients.”

Getting the word out is critical, she said. “Every doctor who finishes training in this state should have heard of this disease.”

Gallegos, who is working to put together both a pamphlet on the disease and a support group, is discouraged that there has been little progress on a cure in the last 10 years. Passage of the bill, he said, would “bring awareness and help snowball research and also save lives.”

But many New Mexico doctors still don’t recognize it, he said. According to Gallegos, every time he goes to the emergency room, “They’re Googling what the illness is. They have no idea.”

Joyce Gonzales of Santa Fe can trace her family in New Mexico back nearly 400 years. In Gonzales’ generation of the family, at least 10 people…

This is a fascinating article with citations back to a lot of genealogy of our original NM families.