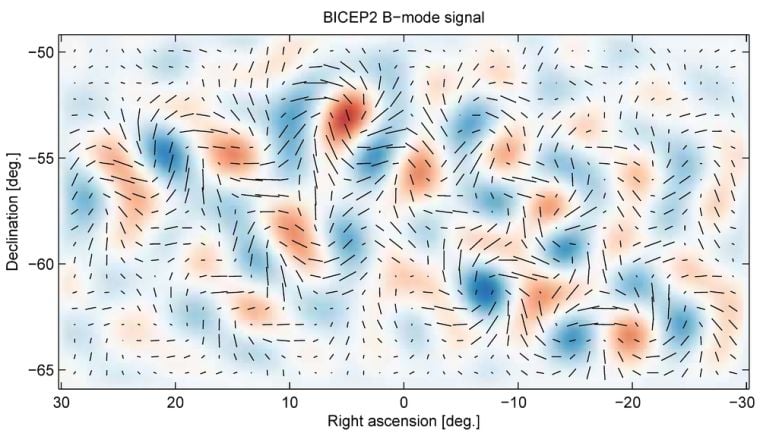 This map of the sky is BICEP2’s ‘smoking gun’ evidence. The distinctive twisting pattern, indicated here by black lines, was generated by gravitational waves interacting with matter and energy in the early universe. The pattern matches what would be expected if the universe underwent an enormous and almost instantaneous expansion. Courtesy BICEP2 Collaboration 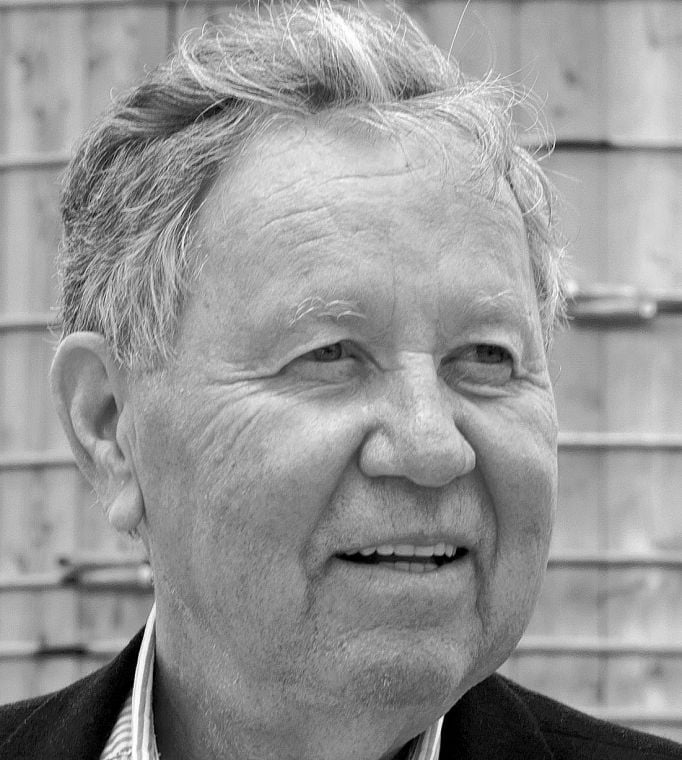 A team of astronomers led by the Harvard-Smithsonian Center for Astrophysics stunned the scientific community earlier this year with new evidence about the birth of the universe, 13.8 billion years ago.

The BICEP2 project, which stands for Background Imaging of Cosmic Extragalactic Polarization, used a specially built telescope at the South Pole to identify a pattern of polarized light thought to signify gravity waves in the cosmic background radiation left over from the first fraction of a second of the universe. These “ripples in the fabric of space-time” were predicted by Albert Einstein in his general theory of relativity. They are of an age and configuration that, if the initial conclusions of the project hold up, will tend to confirm theories of cosmic inflation that claim the universe came into existence and expanded as a NASA announcement says, “by 100 trillion, trillion times, in less than the blink of an eye.”

Before the Big Bang Theory was a popular comedy series, a much different version was part of a standard explanation for the origin of the universe. Most astronomers and theoretical physicists still favor the idea of an expanding universe with a finite age and dimension. As the development of the universe is traced back in time, the Big Bang theory continues to provide a conceptual beginning point, even if it is held together by assumptions that have been frequently revisited.

“[The Big Bang theory] gives not even a clue about what banged, what caused it to bang, or what happened before it banged,” wrote cosmologist Alan Guth, who formally proposed inflation in 1980 along with Paul Steinhardt of Princeton. “The inflationary universe theory, on the other hand, is a description of the bang itself, and provides plausible answers to these questions and more,” Guth wrote in 1997.

Now an MIT physics professor and dubbed “the father of inflationary theory,” in some circles, Guth is in the spotlight of the new discoveries, along with Russian physicist Andrei Linde, now a professor at Stanford University, who modified Guth’s model in a way that the current observations corroborate. Both Guth and Linde are proponents of string theory, a cosmological concept that allows for multiple universes. Among other fundamental ideas, the string theory holds that all matter and all forces are made up of vibrating strings and occupy multiple dimensions of space at the same time. Significantly, a difficult challenge for string theory has been the absence, until the BICEP2 results, of observational data.

“It’s of great interest to people here,” said Michael Graesser, a staff scientist at Los Alamos National Laboratory who works on questions of the early universe.

Since the announcement in March, Graesser says he hears the excitement from his colleagues and generally from the research community on the Internet. For one thing, there is a likely Nobel Prize in the offing for the experiment that can claim the discovery of inflation, but there are also issues and concerns awaiting more definitive answers.

One concern has to do with the specific signature of polarized light, called B-modes.

“Extraordinary claims require extraordinary evidence,” Graesser says, quoting a phrase popularized by astronomer Carl Sagan, proposing a golden rule of thumb for the highest levels of scientific recognition. “That’s why there’s a lot of scrutiny of this result.”

Among the most common concerns voiced by scientists so far have been doubts about the interpretation of the characteristic twisting pattern, called B-modes, in the cosmic background radiation “They may see the light from the Big Bang, but it may also be from other sources,” Graesser said. “Light scattering off dust can also produce these B-modes.”

Like other interested observers, Graesser awaits the next round of results from related experiments. An even more detailed fingerprint of the cosmic background radiation is forthcoming in the fall from the European Space Agency’s Planck spacecraft. “I think this will be an important topic over the next 10 years,” he said. “It can either be a clue or a constraint: If the result goes away it will be a constraint; if it holds up, it will be a clue.”