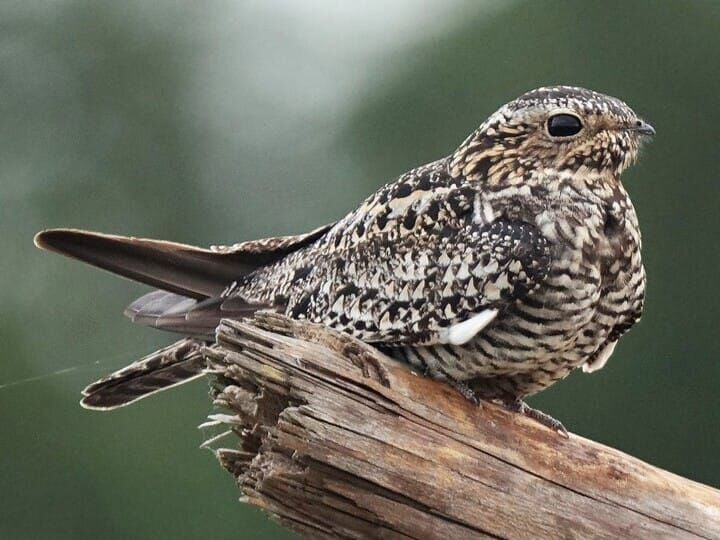 A nighthawk roosting. During the day, nighthawks roost motionless on a tree branch, fencepost or on the ground. 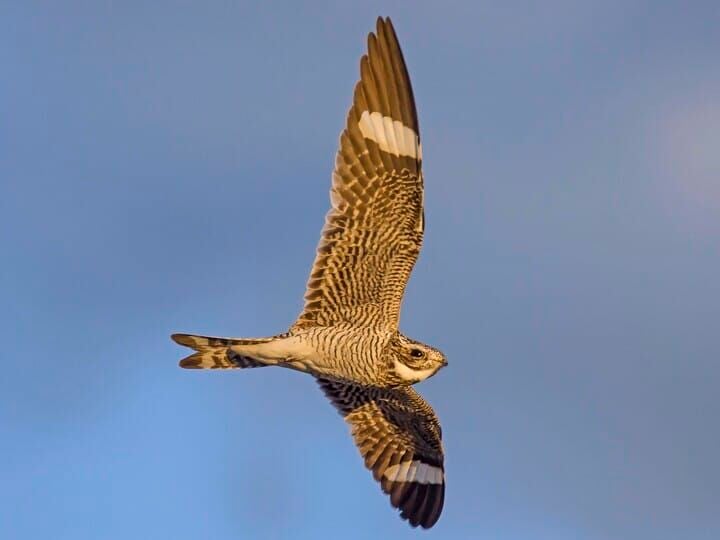 A nighthawk in flight.

For the most part, we all tend to focus on the trees and feeders in our yards during the migration season, but don’t forget to keep an eye on the skies.

A few days ago, my wife and I were into our early evening routine of watching our bird feeding stations.

We looked skyward and saw an amazing sight, a dozen nighthawks flying relatively high (about 500 feet) in looping patterns of continuous flapping and sporadic glides in search of insects.

So, what is a nighthawk? Well, it is not a hawk, and it is not strictly nocturnal. They are part of the nightjar family that consists of nighthawks, poorwills and whip-poor-wills. Each fall nighthawks form large flocks, ranging in size from dozens to hundreds or even thousands, as they migrate south for the winter. They breed in a wide range of territory in North America and spend their winters in Central and South America. Nighthawks have one of the longest migration routes of all North American birds (up to 12,000 miles every year during migration) and move early, beginning to travel south in August. Their sharp, electric “peent” call is often the first sign that they are passing overhead.

All members of the nightjar family feed exclusively on insects that are caught on the wing at dawn and dusk. They have large, gaping mouths that are well suited to snapping up flying insects. Only the small tip of their bill is visible. Their appearance is somewhat similar to swallows and swifts, but they are much larger.

Nighthawks are well camouflaged in gray, white, buff and black with long, pointed wings and forked tails. They are easily identified by very distinctive white patches on the underside of their wings.

During the day, nighthawks roost motionless on a tree branch, fencepost or on the ground. They tend to perch facing along a branch, rather than across it as birds usually do. This, along with their camouflage coloring, conceals them during the day.

Males court females by diving through the air, making a booming sound as air rushes over their wings. The male eventually lands on the ground before the female, spreading and waggling its tail, and puffing out his throat to display the white throat patch, while croaking at her. They nest both in rural and urban areas, commonly on the ground and even on gravel roofs. The nest consists of gravel, wood chips, leaves and other vegetation. Females typically incubate two eggs (creamy white to olive gray, heavily speckled with gray, brown and black), leaving them unattended in the evening to feed. Both parents feed regurgitated insects to their chicks. Parents perform diversion displays to draw intruders away from the nest.

Nighthawks are estimated to number 16 million but are declining in population by 2 percent per year as a result of the reduction in mosquitos and other aerial insects due to pesticides and habitat loss. They are also vulnerable to collisions with cars since they forage over roads or roost on roadways at night. Remember to keep an eye on the skies to spot these beauties.

Ken Bunkowski and his son, Matt, are co-owners of Wild Birds Unlimited in Santa Fe and look forward to sharing the joy that birds bring into our lives.

How large are nighthawks? Will they eat at a feeder or are the strictly insect feeders?

The ones we sometimes have are about the size of Curved bill thrasher or Scrub Jay's. They only eat live flying insects, so not coming to your feeder, but look for them in the sky around sunset and shortly after. You may hear their "brooommm" as they let out air while diving for insects. Times are hard for them as insect populations are decimated. Hardly any moths or other night flying insects lately.