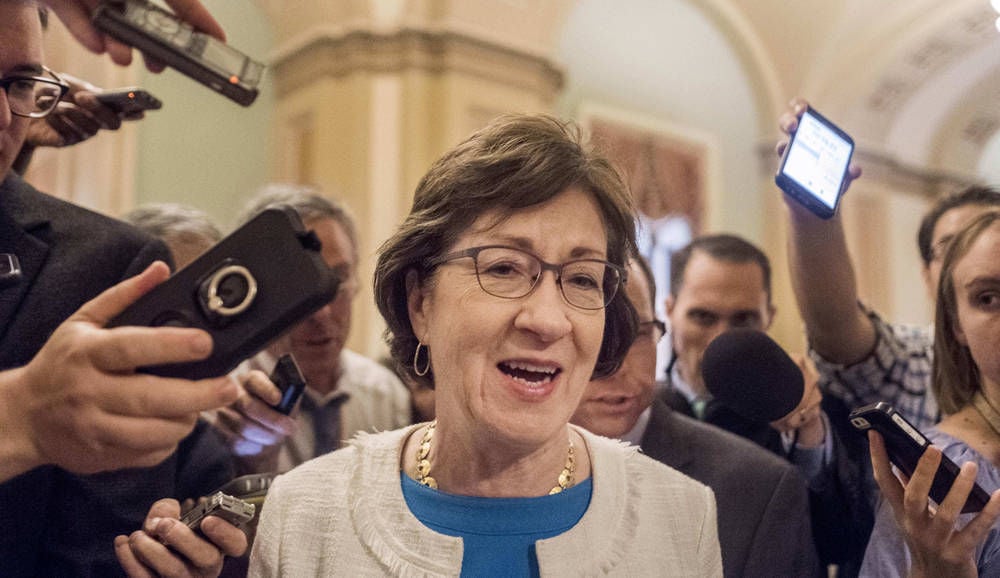 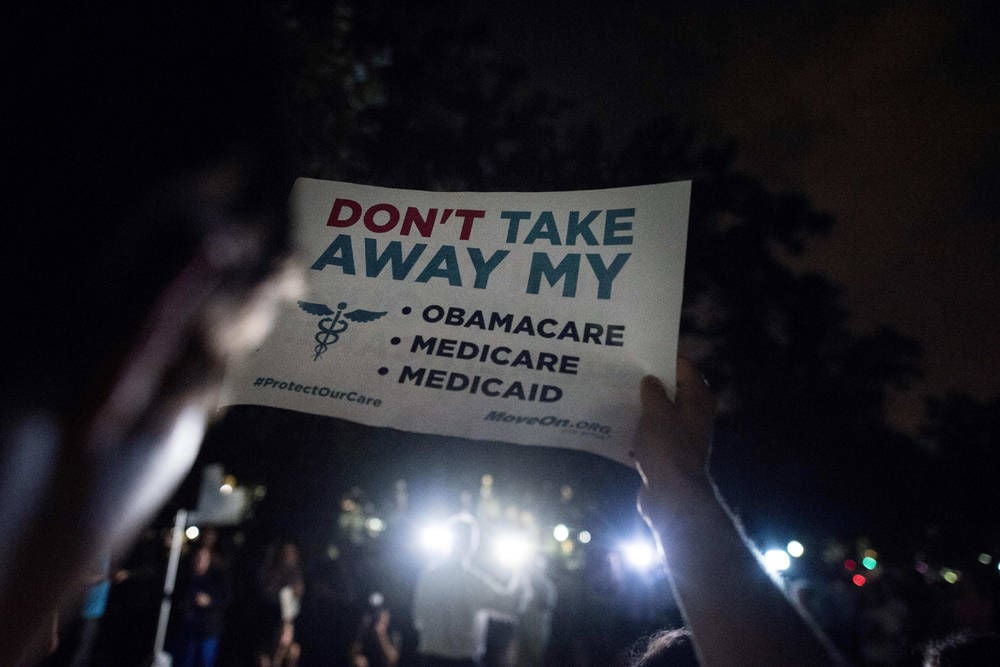 Hundreds of people stood outside the U.S. Capitol Thursday, to protest the Republican health care bill as the Senate worked overnight on the legislation. Melina Mara/The Washington Post 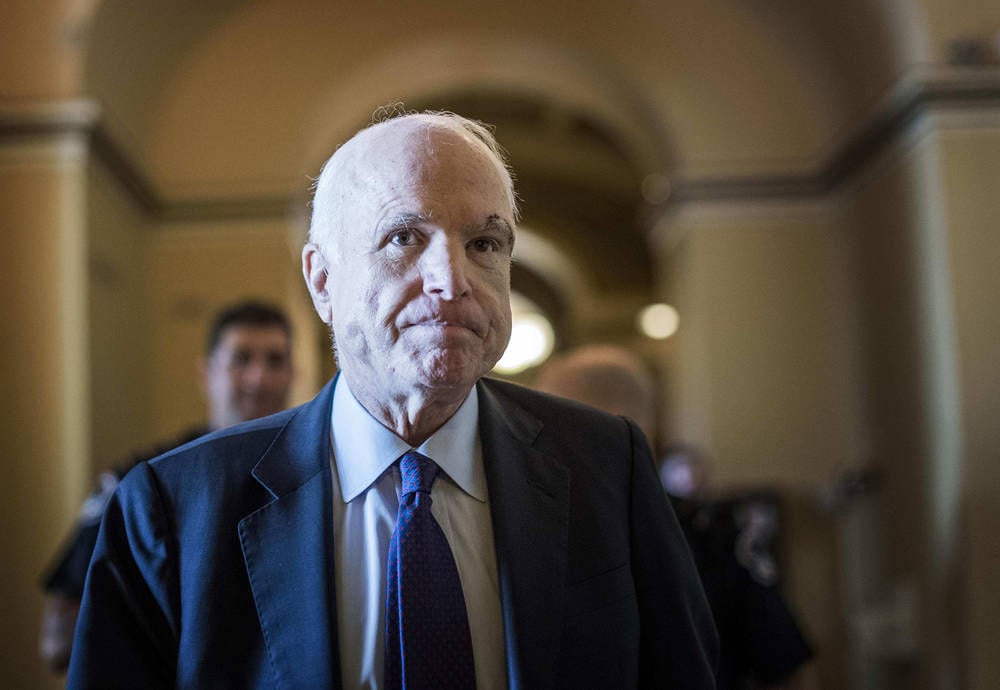 In a dramatic showdown on the Senate floor, Sen. John McCain, R-Ariz., stunned his colleagues by joining two other Republicans to reject the latest attempt to rewrite the ACA. Melina Mara/The Washington Post 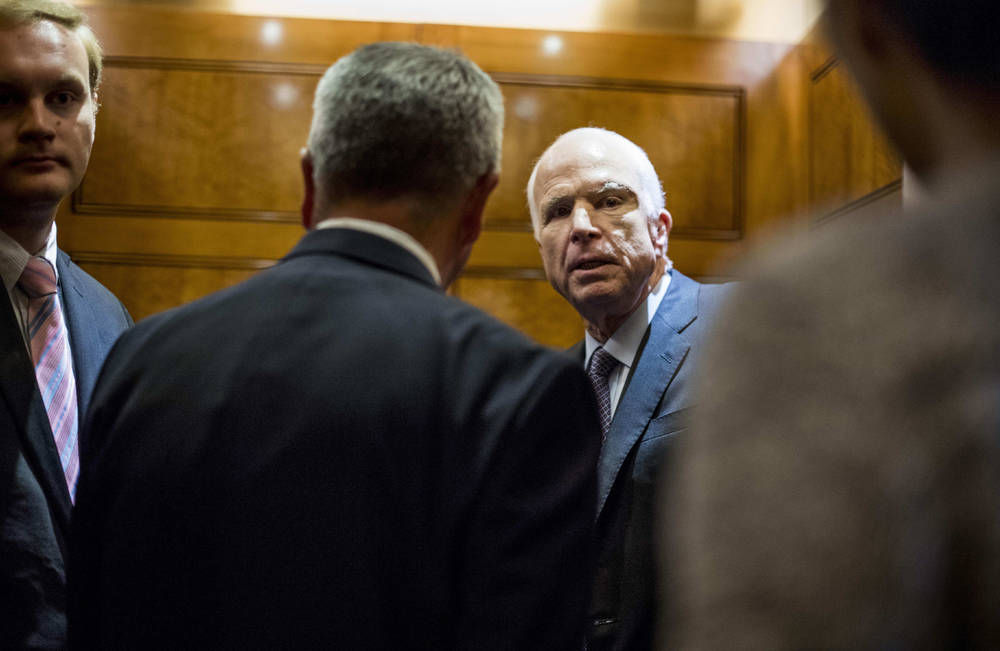 Hundreds of people stood outside the U.S. Capitol Thursday, to protest the Republican health care bill as the Senate worked overnight on the legislation. Melina Mara/The Washington Post

In a dramatic showdown on the Senate floor, Sen. John McCain, R-Ariz., stunned his colleagues by joining two other Republicans to reject the latest attempt to rewrite the ACA. Melina Mara/The Washington Post

WASHINGTON — Congressional Republicans on Friday glumly confronted the wreckage of their seven-year quest to abolish the Affordable Care Act, blaming each other and President Donald Trump for the dramatic early-morning collapse of the effort but finding no consensus on a way forward.

Some GOP lawmakers clung to long-shot hopes that some version of the legislation might be revived and that a deal might yet be struck before the fall. But the Senate’s rejection early Friday of a last-ditch, bare-bones proposal to roll back just a few key planks of the law left GOP leaders with few options for uniting their sharply polarized ranks.

Hours later, House Republicans gathered in the Capitol to take stock of the situation. Some raised the prospect of abandoning their long-standing pledge to “repeal and replace” the ACA and instead working with Democrats to shore up weak spots in the law known as “Obamacare.” But Trump signaled little interest in that approach, leaving many lawmakers baffled about how to proceed.

“I’m not a prophet,” said Rep. Tom MacArthur, R-N.J., who helped push an earlier version of the repeal bill through the House. “I don’t know what comes next.”

Politically, the collapse of the repeal effort is potentially devastating for Republicans. It leaves Trump without a significant policy achievement in the critical first six months of his presidency; it casts a pall over the party’s coming drives to pass a budget and overhaul the tax code; and it exposes GOP lawmakers to rising anger from their conservative base.

Substantively, it leaves much work undone. While the ACA has made health insurance accessible to millions of Americans, it has failed to contain rising costs, especially in the individual insurance market, where people without access to employer- provided coverage buy policies. Without federal action - and additional cash - those marketplaces could become unstable.

Lawmakers in both parties have called for stabilizing the marketplaces. But many Republicans have little appetite for entering negotiations on the issue with Democrats.

“I don’t think the Democrats have any interest in doing anything productive,” said Sen. Ted Cruz, R-Texas, a vehement critic of the ACA. He added: “Republican senators are going to go home. They’re going to hear from their constituents, and I don’t expect the response to be muted.”

At the meeting of House Republicans, Speaker Paul Ryan, R-Wis., summed up the mood by citing an old Gordon Lightfoot tune called “The Wreck of the Edmund Fitzgerald,” about sailors drowning on a sinking ship.

Entering and exiting the meeting, lawmakers offered a variety of ideas for addressing their predicament, and excuses for how they got here.

“We just ran out of time. It was an artificial deadline,” said Rep. Mark Meadows, R-N.C., chairman of the hard-right Freedom Caucus. He predicted that Republicans would still get a bill to Trump’s desk in September.

Other Republicans called on their colleague to start over and work with Democrats through the regular committee process to craft an ACA overhaul that could win bipartisan support.

A key leader of the GOP repeal effort, Rep. Greg Walden, R-Ore., said he is willing to take that approach. And Sen. John McCain, R-Ariz., the man credited with driving a stake through the heart of the latest GOP health measure, issued a rousing call to bipartisanship.

“The vote last night presents the Senate with an opportunity to start fresh,” McCain said in a statement. “It is now time to return to regular order with input from all of our members — Republicans and Democrats — and bring a bill to the floor of the Senate for amendment and debate.”

Democrats, too, expressed interest in working across the aisle, especially on a plan to make federal cost-sharing subsidies permanent. The subsidies — which will total about $7 billion this year and $10 billion in 2018 — reimburse insurers for reducing co-payments and deductibles for certain low-income customers, reducing their out-of-pocket costs.

Trump administration officials have yet to say whether they will continue financing the subsidies past the end of this month.

“The insurance industry, hardly our allies, have said the number one thing to stabilize the system and bring premiums down is to make the cost-sharing permanent,” Schumer said. “That would have a lot of support.”

Schumer expressed hope that Friday’s health care vote would prove to be a “magic moment” that sparked a wave of bipartisanship. But Senate Majority Leader Mitch McConnell, R-Ky., sent early signals that he is skeptical of requests for more federal money to shore up the ACA. After Friday’s vote failed, McConnell stood red-faced and dejected on the Senate floor.

“Now I think it’s appropriate to ask, what are their ideas?” McConnell challenged Democrats. “It’ll be interesting to see what they suggest as the way forward. For myself I can say — and I bet I’m pretty safe in saying for most on this side of the aisle — that bailing out insurance companies with no thought of any kind of reform is not something I want to be part of.”

Trump, meanwhile, continued to express mainly hostility toward the ACA. On Friday, he unleashed a series of tweets blaming “3 Republicans and 48 Democrats” in the Senate who “let the American people down” by rejecting the latest overhaul proposal.

“As I said from the beginning, let ObamaCare implode, then deal. Watch!” Trump wrote. He also called for Senate Republicans to abolish the filibuster - a venerable Senate procedure designed to protect the minority party that requires contentious matters to receive the votes of at least 60 senators.

As Republicans weighed working with Democrats, they were also struggling to resolve hard feelings toward one another.

King accused Murkowski of waging a successful write-in reelection campaign in 2010 that “was essentially a revolt against GOP primary voters.” And he said McCain “recently told the Senate he would return and ‘give all of you cause to regret the nice things you said about me.’ He kept his word.”

Earlier this week, McCain, who was recently diagnosed with an aggressive form of brain cancer, flew to Washington and cast a vote that helped his colleagues begin debate on the latest GOP proposal to overhaul Obamacare. On Tuesday, he delivered a stirring address calling for a bipartisan approach to overhauling the 2010 health care law and criticizing the highly secretive and partisan process that had produced the pending legislation.

The speech set the stage for what was to come.

In the wee hours after midnight Friday, McCain — scarred from recent surgery to remove a blood clot that unearthed his cancer — rebuffed a last-minute appeal from Vice President Pence on the Senate floor. He emerged from his talks with Pence at 1:29 a.m., approached the Senate clerk and gave a thumbs down — joining Murkowski and Sen. Susan Collins of Maine as the only Republicans to vote against the legislation.

The measure failed, 51 to 49, with all 48 members of the Democratic caucus voting no.

Stunned gasps and some applause echoed through the chamber. McConnell and his leadership aides stood nearby, grim-faced and despondent.

Meanwhile, McCain’s office announced Friday afternoon that he would fly back to Arizona for radiation and chemotherapy on Monday, but that he would be back in Washington in the fall.

But while talk of bipartisanship was ascendant in the Senate, many House members were angry with their Senate colleagues for letting the repeal effort fail.

“You’re a brand-new member and the guys all pop down next to you and say, ‘See across the hall, that’s your opposition. The other side of the Capitol, that’s the enemy,’ ” Schweikert said. “Turns out it could be true.”