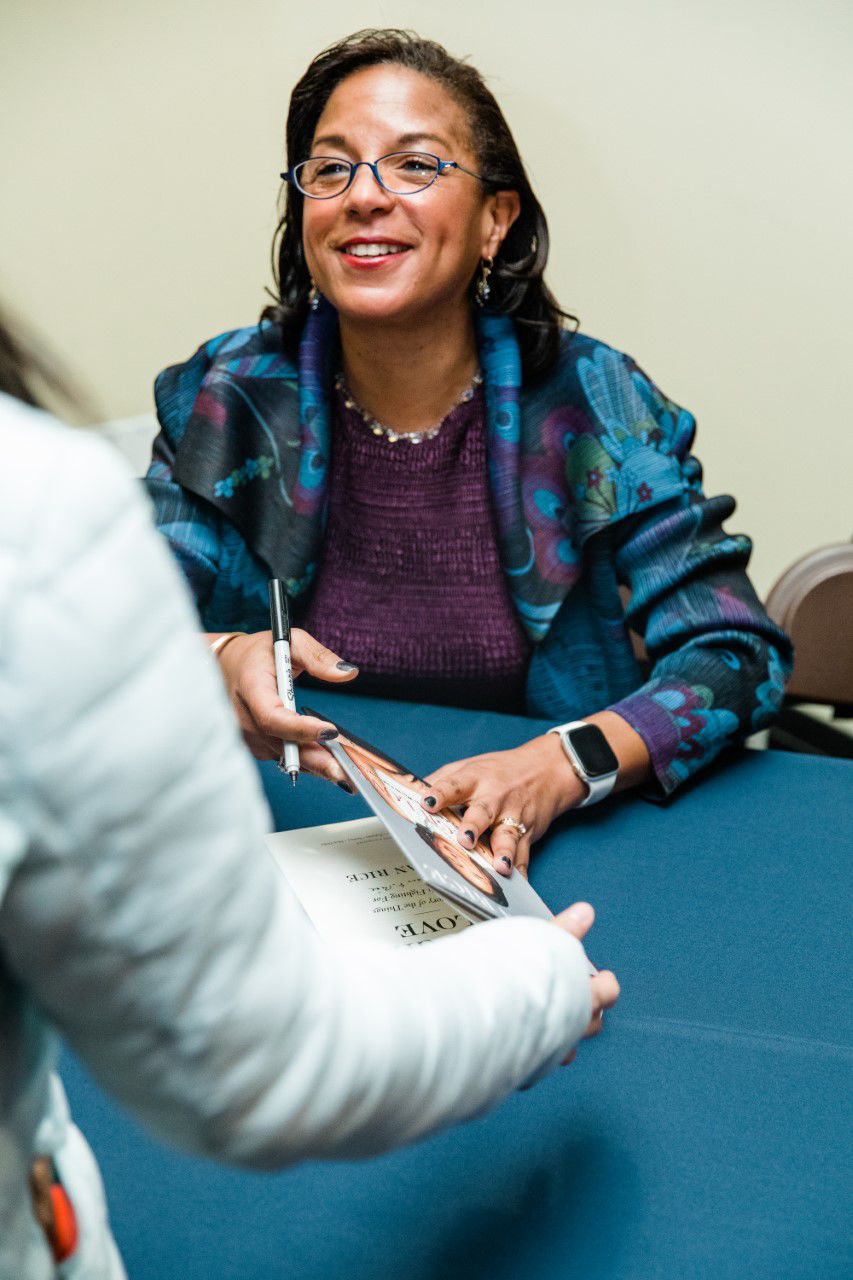 Susan Rice signs a copy of her book, Tough Love, which she’ll discuss in Santa Fe. 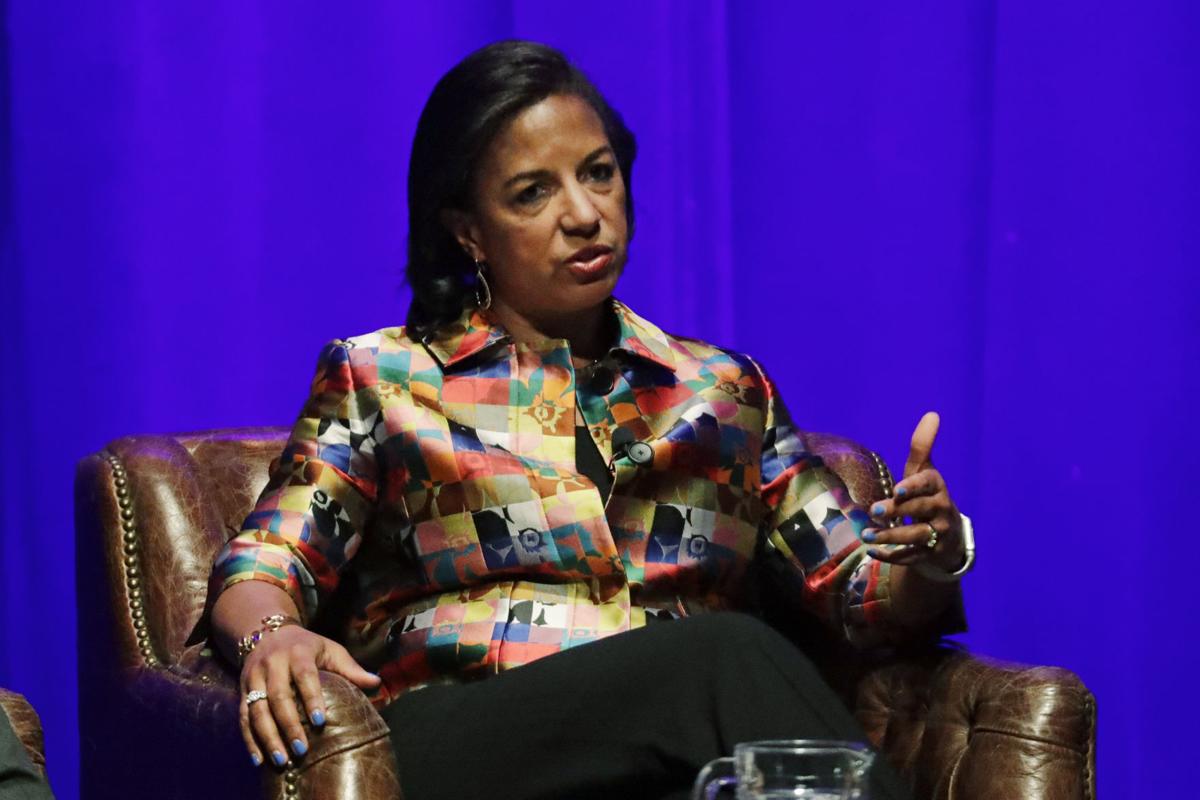 Susan Rice signs a copy of her book, Tough Love, which she’ll discuss in Santa Fe.

Susan Rice laughed heartily as she recalled falling face down in cactus in Mexico.

In her new book Tough Love, the former national security adviser describes an incident in which she dove for a football her nephew had thrown during a vacation. She landed on cactus with needles that were “triangular-shaped spears, the size of a fingernail.” They embedded in her face, scalp, arms, legs, torso and rear end.

Her nephew and a diplomatic security agent began plucking needles from the bloody punctures.

“Of all the risky ventures I took while U.N. ambassador — from traveling to war zones in Iraq, Afghanistan and South Sudan to being mobbed in Libya and trudging through the slums of Delhi — the closest DS [diplomatic security] got to having to save me was when my lead agent kindly and carefully removed cactus needles from my booty in Mexico,” she writes.

What would be a traumatic mishap for most people was a moment of levity for Rice. It’s indicative of just how brutal and intense her years of service were at times in the harsh Beltway media spotlight in Washington, D.C. That’s where every perceived misstep was magnified a hundredfold and a thick hide was required to withstand it.

Rice will discuss her autobiography March 5 at a fundraiser for the Santa Fe Council on International Relations at La Fonda on the Plaza. Tickets are $225.

Her 500-page memoir blends vivid accounts of her personal life, family upbringing and turbulent times on the world stage, from a budding foreign policy agent taking on increasing responsibility in African affairs during the Clinton administration to her career blossoming under President Barack Obama, first as U.N. ambassador and then as national security adviser.

With elegant, economical prose, she pulls the reader along in her journey of discovery, including the painful lesson that ascending the heady heights of power and becoming a trusted adviser to presidents comes with a price. Rice became a target for right-wing furor over the Benghazi attack on September 11, 2012, and a political pawn for Republicans seeking to wrest the presidency from Obama that year.

Yet despite enduring attacks — some covertly racist and sexist — and witnessing the fatal consequences of America’s failed foreign policies in Africa as a diplomat and strategist, Rice said she would choose the same path again, even knowing the extreme difficulties.

“Yes, I would serve again,” Rice said in a phone interview. “I was privileged to work on the most important issues for a country I care deeply about, with smart, dedicated people, and for a president I respect enormously. And I think I was trying to do the right thing.”

The book reveals a personal side of Rice that she could never show while in public service. Reporters, political foes and subordinates only saw her professional persona, leading many to judge her as demanding, aggressive, blunt and difficult to work with.

As she tells it, she was trying to accomplish as much as possible, which can mean being unpopular at times and misunderstood.

“It is a challenge when your job is to speak for the country and for the president,” she said. “You’re not there to speak for yourself. But you know that when you sign up for it. That’s part of the reason I say in the prologue that I felt it was timely and important for me to tell my own story in my own words.”

Although Rice gives credit to Obama and Clinton where she thinks it’s due, she doesn’t exalt them. She recounts their foreign policies with a critical eye, particularly their common reluctance to intervene in humanitarian crises if such actions didn’t clearly serve U.S. interests.

Clinton never formally decided against intervening in Rwanda to halt genocide, Rice writes, but he also never tried to rouse the U.S. and its allies from the sidelines — a decision that would haunt him.

Obama launched an air offensive in Libya that saved lives in the short term and led to dictator Moammar Gadhafi being killed by rebels, she writes, but he didn’t try to build a new, stable regime. That left the country vulnerable to violent extremists, including the Islamic State faction that spearheaded the attack against the U.S. consulate in Benghazi in 2012, killing four Americans.

After the Benghazi attack, Rice appeared on Sunday news shows to impart official CIA talking points, unwittingly setting herself up as a political scapegoat during an election year. Republicans and other critics thrashed her for broadcasting incorrect information, accusing her of being dishonest, even though she merely conveyed what intelligence officials thought at the time.

A friend of hers at Fox News later confided that the network went after her instead of her bosses because she made a good villain to rile up viewers.

It was hard for her to believe that her race and gender didn’t have something to do with it, she writes in her book.

Political foes later used Benghazi as ammunition to oppose her nomination as secretary of state, resulting in her withdrawing to avoid creating a distraction in the early months of Obama’s second term.

When asked in the interview if this was an example of Washington politics becoming more malicious and hyperpartisan in the Obama era, Rice replied, “We’ve been on a downhill trajectory” for decades.

“The hyperpartisanship probably began in earnest in the Clinton years,” she said. “It’s only intensified since. When you had Mitch McConnell make it very plain in the beginning of the Obama administration that his job was to do everything possible to make it impossible for Obama to be reelected and foil every effort, whether it was good for the country or not, I think that presaged the insanity we’re experiencing now.”

Rice tempered her partisanship by saying that during the Obama and Clinton presidencies, there were some Republicans willing to put principle over party.

In a later chapter of her book, Rice describes telling associates during the 2016 election that Donald Trump had a strong chance of winning because he tapped a vein of white resentment that many political operatives were underestimating. Colleagues and friends dismissed her concerns, which later proved prophetic.

Does she think Trump will be reelected?

“I think he has a real chance. ... That doesn’t mean he will be,” Rice said. “I think he can and must be defeated, but it’s going to be hard, and the Democrats are going to have to nominate someone who can attract a broad section of the electorate.”

Rice bemoaned the well-publicized dismantling of the State Department that’s happened under Secretaries of State Rex Tillerson and Mike Pompeo.

“I think it’s obvious that the current administration has no use for our State Department or our career professionals,” Rice said. “It makes us weaker. It makes us ineffectual. It’s damage that will take many, many years, if not a generation, to repair.”

Writing a book that demands the author mentally and emotionally relive such tumultuous times might seem painful. Rice said chronicling her early family life and childhood was more difficult than revisiting professional gullies like Benghazi.

She writes about how her parents’ deteriorating marriage escalated into more frequent and bitter quarreling until the couple separated. Their rancorous feuds became a crucible that helped shaped who she would become later in life. As a child, she threw herself in the middle of their most frenzied fights to play referee and help negotiate a truce, however fleeting, which taught her mediation skills that she would use as a diplomat.

Her family was politically minded and loved to engage in spirited debates, compelling her to be informed about current affairs at a young age and to embrace verbal combat.

Her father was a Cornell University economics professor and a governor in the Federal Reserve. Her mother was an education policy expert and guest scholar at the Brookings Institution. Being accomplished, they told her not to use race as an excuse or an advantage.

So when she graduated as top student from National Cathedral School, she viewed it as a rebuke against the white mothers who would tell their daughters Rice would get offers from the best colleges only because she was black.

“I wanted to go through that process of emotional excavation,” Rice said about recounting the triumphs and turmoil. “On balance, it was certainly cathartic and a learning experience.”

What: Former national security adviser and U.N. Ambassador Susan Rice will discuss her new book, Tough Love: My Story of the Things Worth Fighting For, during a gala fundraiser for the Santa Fe Council on International Relations.

Cost: Tickets are $225 and include a signed copy of the book. Tickets must be purchased by Friday.

Shameless warmonger. What kind of reporting is this, that offers no alternative views? This piece would seem to be propaganda, frankly. Wake up please.