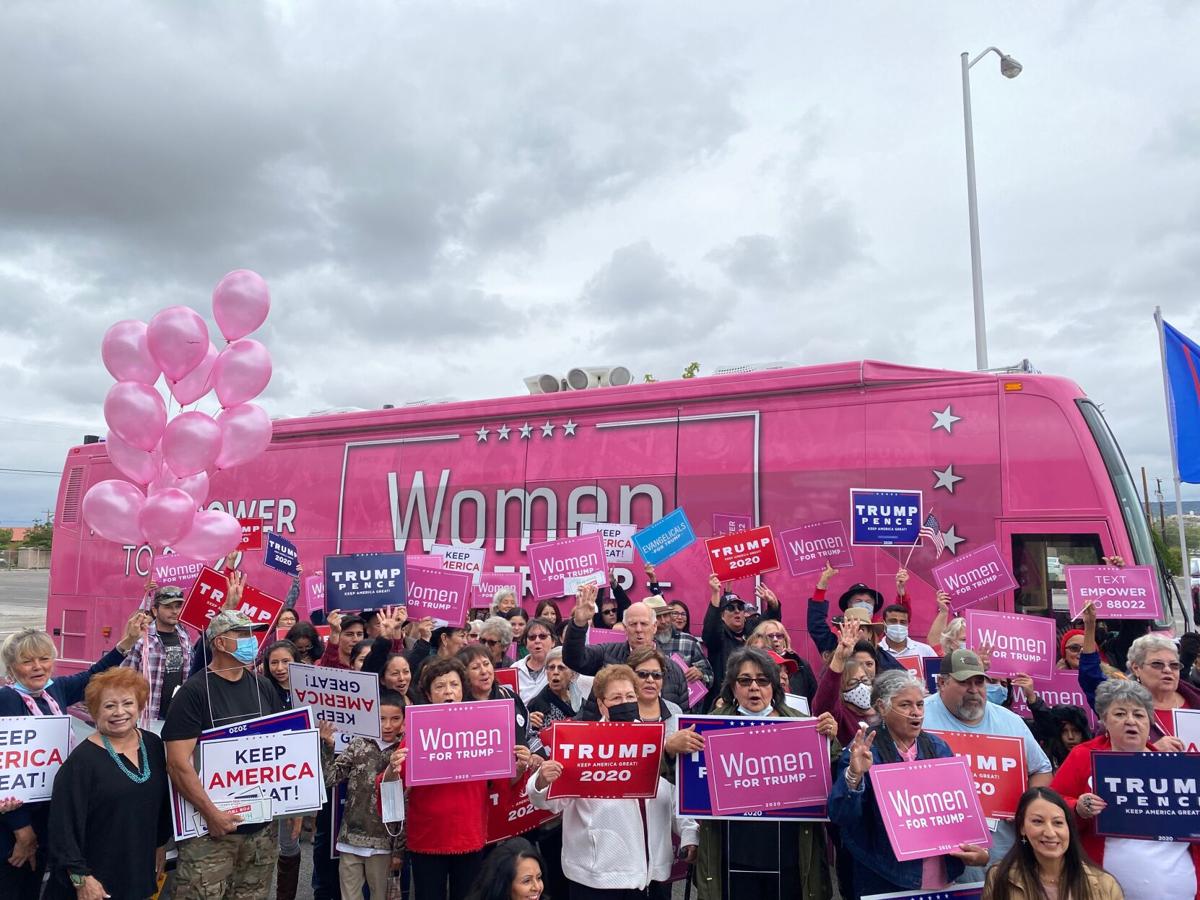 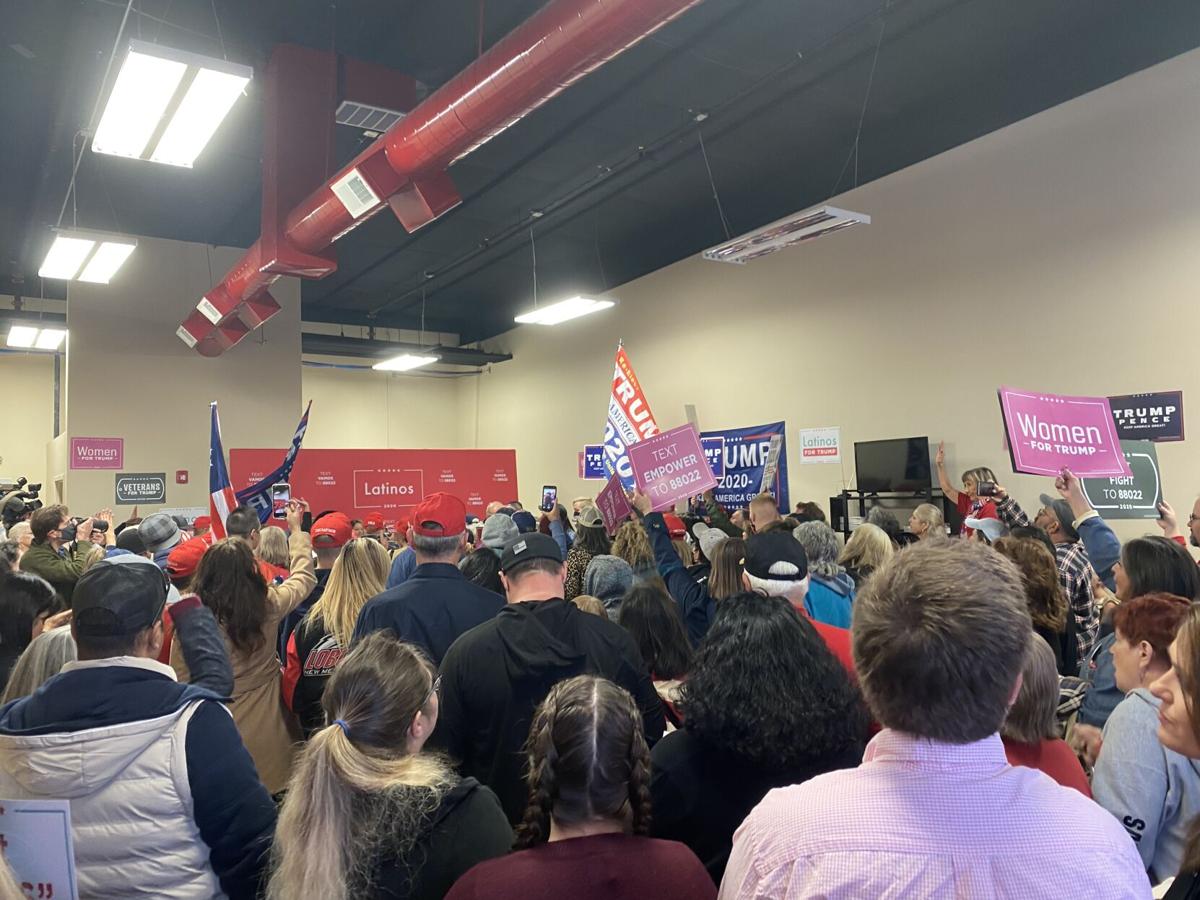 An event Wednesday morning at a Trump campaign Hispanic outreach office in Albuquerque, where roughly 200 people packed indoors, many without masks.

An event Wednesday morning at a Trump campaign Hispanic outreach office in Albuquerque, where roughly 200 people packed indoors, many without masks.

A three-day Trump campaign bus tour complete with rallies across the state concluded Wednesday — sparking the interest of hundreds who showed up to some of the events and concern from Democrats and others who criticized Republicans for not adhering to a public health order limiting gatherings and requiring people to wear masks in public.

The Women for Trump bus tour finished in Northern New Mexico on Wednesday after hitting a variety of cities in the southern and central parts of the state. At each event, photos from the Republican Party of New Mexico depict dozens — sometimes hundreds — of people packed tightly together without masks on.

In one picture, dozens of people are crammed inside an office identified as the Hispanics for Trump Community Center in Albuquerque. Almost no one appears to be wearing a mask.

Pearce said the rallies are part of a concerted effort from the Trump reelection campaign and the state Republican Party to turn New Mexico red in the upcoming presidential election.

“It is irresponsible and dangerous for the New Mexico GOP to hold these kinds of events without encouraging masks and social distancing,” Elliston said in a statement, adding Republicans are “encouraging behavior that could lead to another deadly spike in COVID-19 cases.”

Pearce responded to the criticism by saying Democrats have destroyed the state economy with measures meant to slow the spread of COVID-19 and are attempting to divert attention from a lackluster effort to campaign for Democratic presidential candidate Joe Biden in New Mexico.

Pearce claimed 50 Trump staffers have knocked on some 300,000 doors across the state in an effort to boost the president’s campaign. He stated erroneously in an interview Wednesday that the U.S. Centers for Disease Control and Prevention released guidance last week instructing Americans to no longer social distance or wear masks.

The CDC continues to recommend avoiding close contact with others and wearing a face mask as two of the best ways to reduce the spread of the coronavirus. The federal agency updated its mask guidance several weeks ago to urge people to stop wearing masks with valves, vents or face shields in lieu of cloth coverings or surgical masks because the former can still spread the virus to others.

We know the virus doesn't have a brain, what we didn't know is that these women don't either. Be smart, be safe and wear a mask.

Thank you for your intelligence! I feel so alone here except for a couple of others.

Trump’s base is shrinking faster each day. There will be. A lot of cleanup when he and his family leave in January 2021. November, one of my favorite months of the year is around the corner!

The American ESTABLISHMENT (Republican and Democrat and Fake News) need replacement with legitimate American political parties that beneficially represent the United States & American citizens. Until that happens vote for individuals who adhere to our founders principals of personal responsibility. The U.S. Executive President Trump is getting positive changes for productive U.S legal citizens in spite of wide anti-American opposition. He is not a politician who would rather destroy the nation than lose their sweet spot of domination. They will continue to restrict and divert individual freedoms that produce life sustaining products.

Integrity, Morality, Family Values, Narcissistic, Destroyer of the Environment - what's not to like!!?? 🤮

Gabriel Lujan Doesn't the GOP and the Liar in Chief love false equivalents like you do. These women were in a bus together for three days without masks. Protesters, except for the right wing gun lovers who took over capitol bldgs, were outside and mostly masked. Not equivalent. What I would like to see is COVID results for this group and tracing of those they came in contact with in...And now they know Trump played down the dangers of COVID--what to keep the numbers low? Do you think 190K deaths is acceptable tradeoff to make Trump look good?

Trump will win 2020. And what an egregious title for the article. When people protest BLM etc your biased news never mentions covid and the pandemic. But when people support OUR PRESIDENT, you mention mask. This news is so biased and left leaning it should not even be considered news but the “Santa Fe Liberal New Mexican Opinion”

Looks like Robert Graham is no longer a part of the SFNM web commenter community.

Anyone have a clue as to his fate?

Of course this wouldn’t be nearly as bad if trump the bungler hadn’t lied about it from the start, then did everything that he could by continuing to lie about it. Don’t take my word for it, you can hear him admitting to lying when he was interviewed by Woodward. Actually, you can watch him lie about it on video!

That study has been challenged. It is only now that contact tracing might give more accurate numbers.

Fascism: is a form of authoritarian ultra nationalism characterized by dictatorial power, forcible suppression of opposition, as well as strong regimentation of society and of the economy. Hmmmm, sounds like what our Dem. Gov has done to New Mexico, just saying.

Since you’re obviously incapable of finding Google, go to a library. The dictionary there will give you the actual definition of Fascism.

A good bunch of Honest thinking people of all skin colors are Americans and their general mutual respect is paramount. Red, Yellow, Black, White, Mixed race, Male and Female poverty will be reduced and well being enhanced by individuals who embrace honest self-sufficiency and earn their keep. One by one they earn their keep by adding value to a product for trading. Trading manual work, skill, innovation, experience, respect, wisdom, honesty, sacrifice, and love for products that support life.

What planet do you live on?

yea, the dude is seriously incoherent...wha?