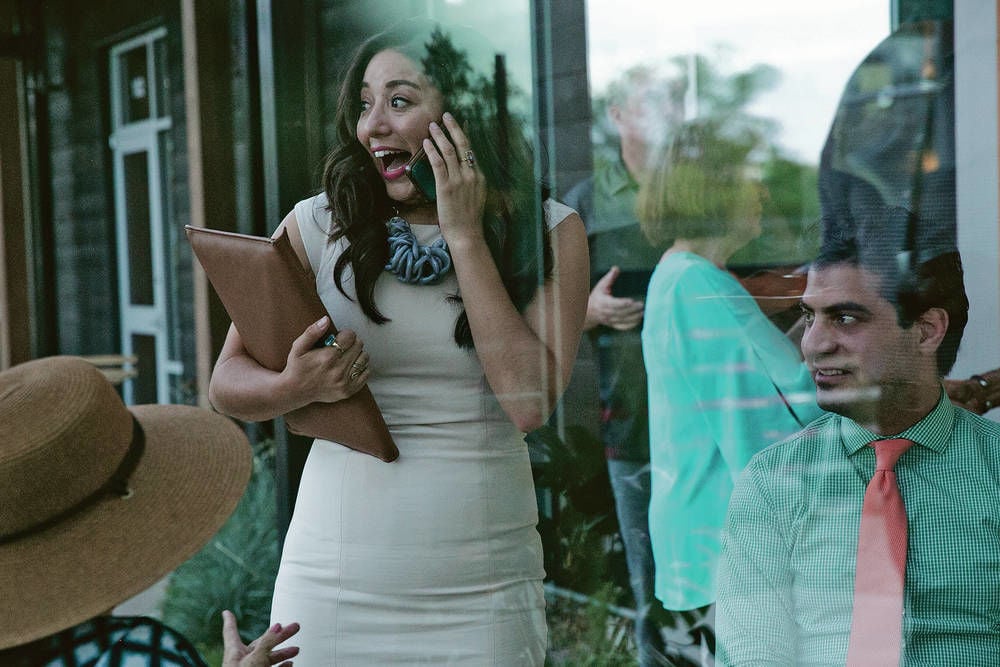 Andrea Romero reacts to news of her lead. Melanie Metz/For The New Mexican 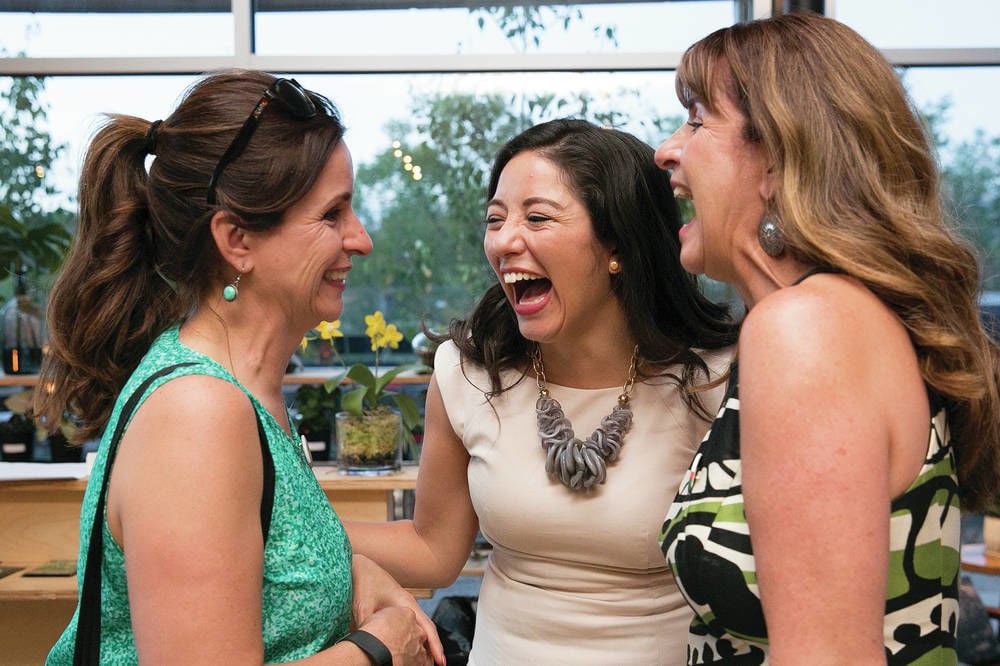 Andrea Romero, center, laughs with her aunt, Donna Lopez, left, and her mother, Aundrey Lopez, during her primary election party at Opuntia on Tuesday. Melanie Metz/For The New Mexican 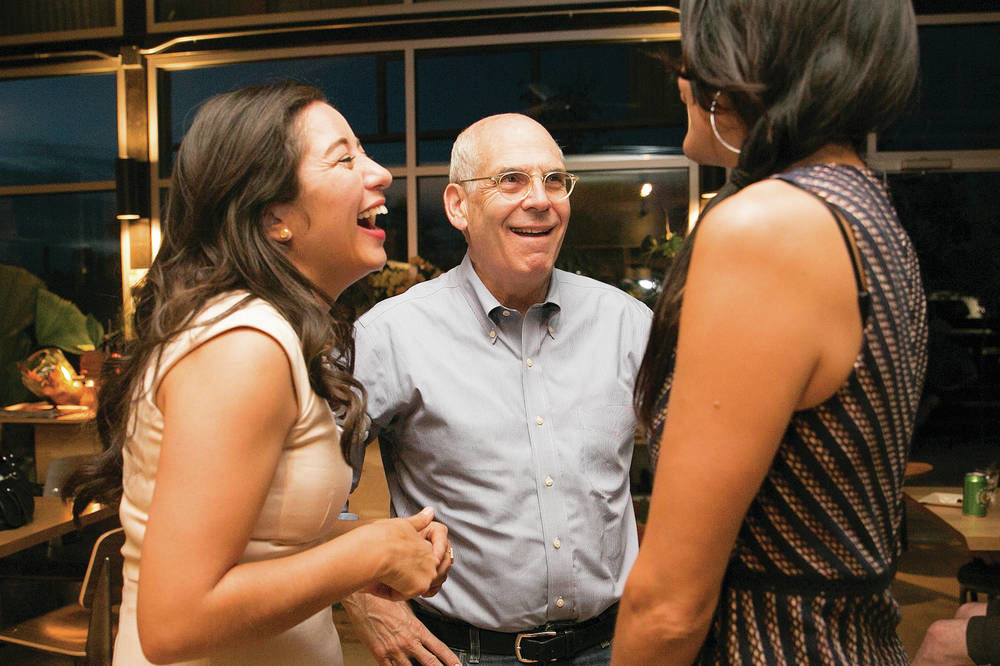 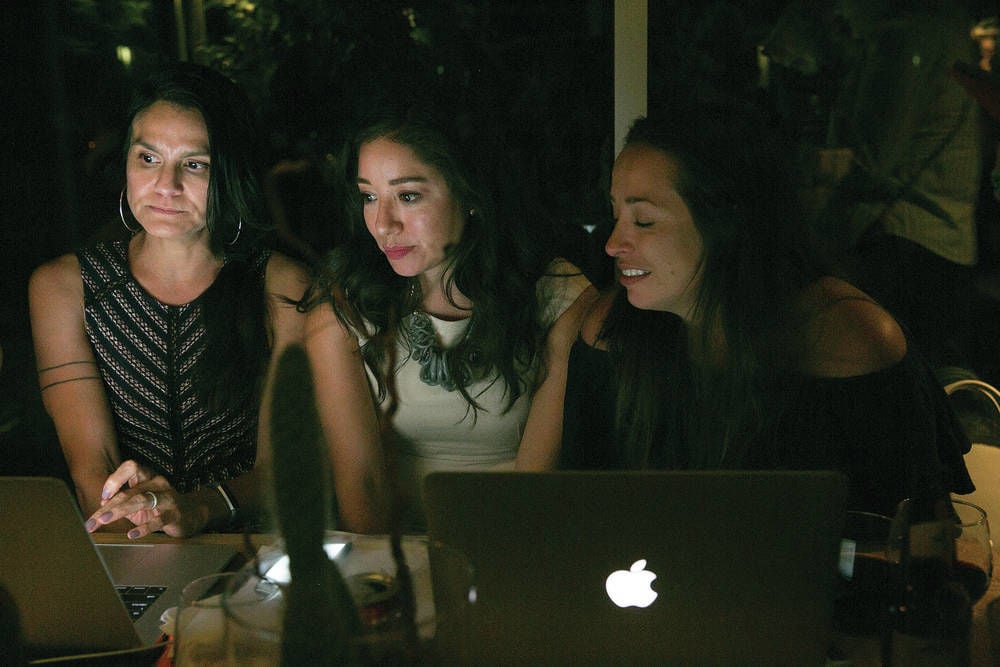 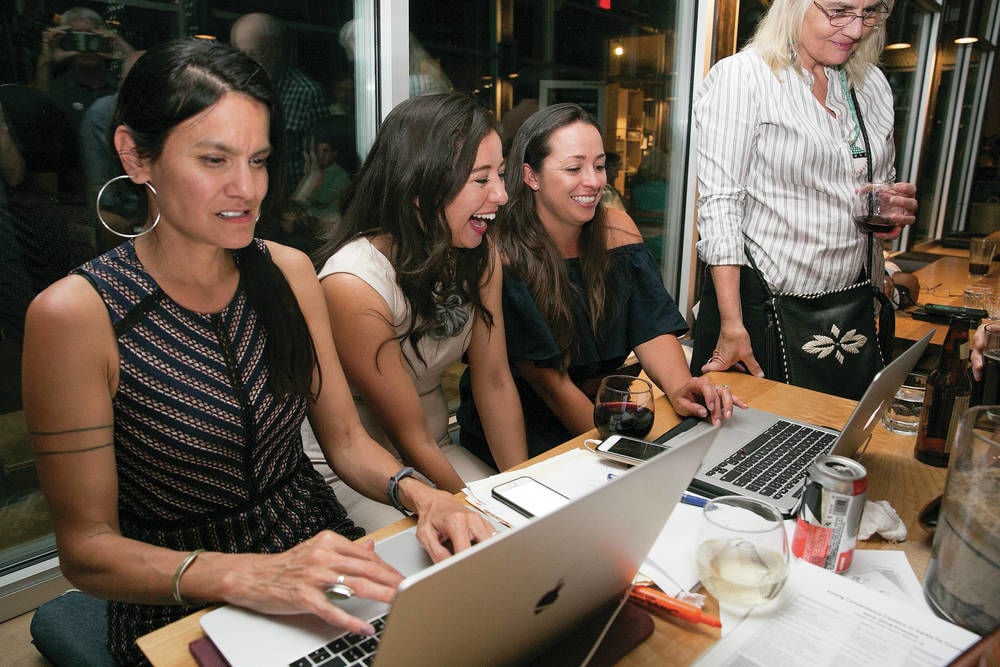 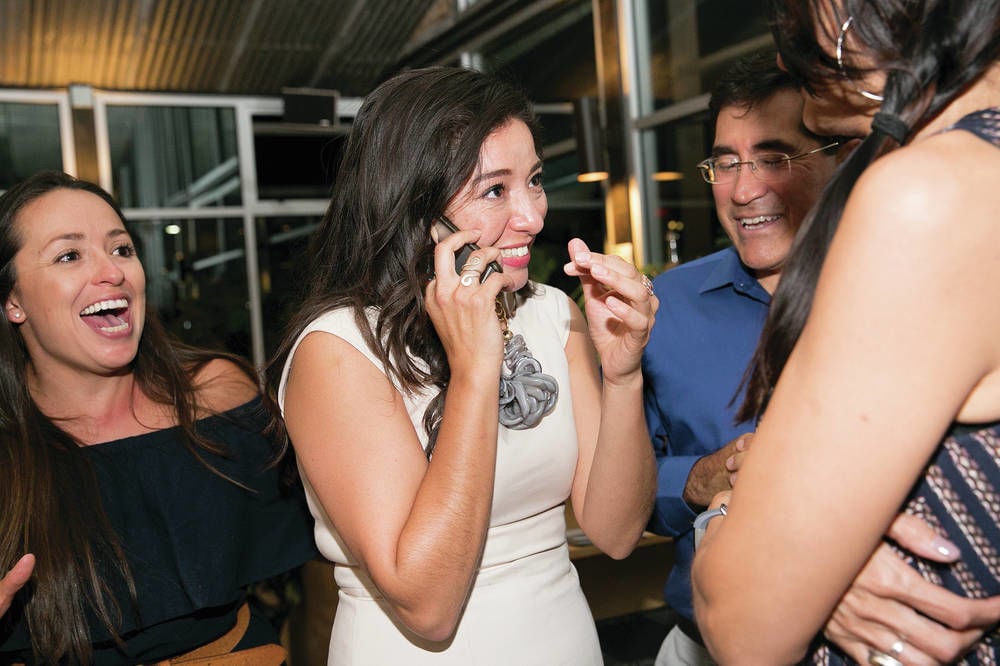 Andrea Romero reacts to the news of her primary win at Opuntia on Tuesday, June 5. Melanie Metz/For The New Mexican 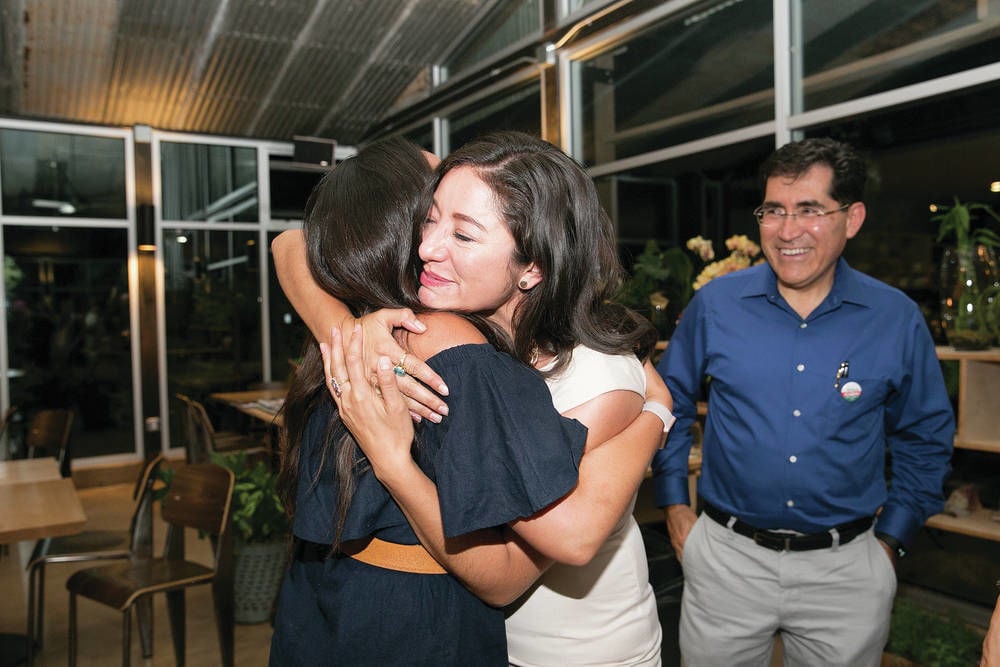 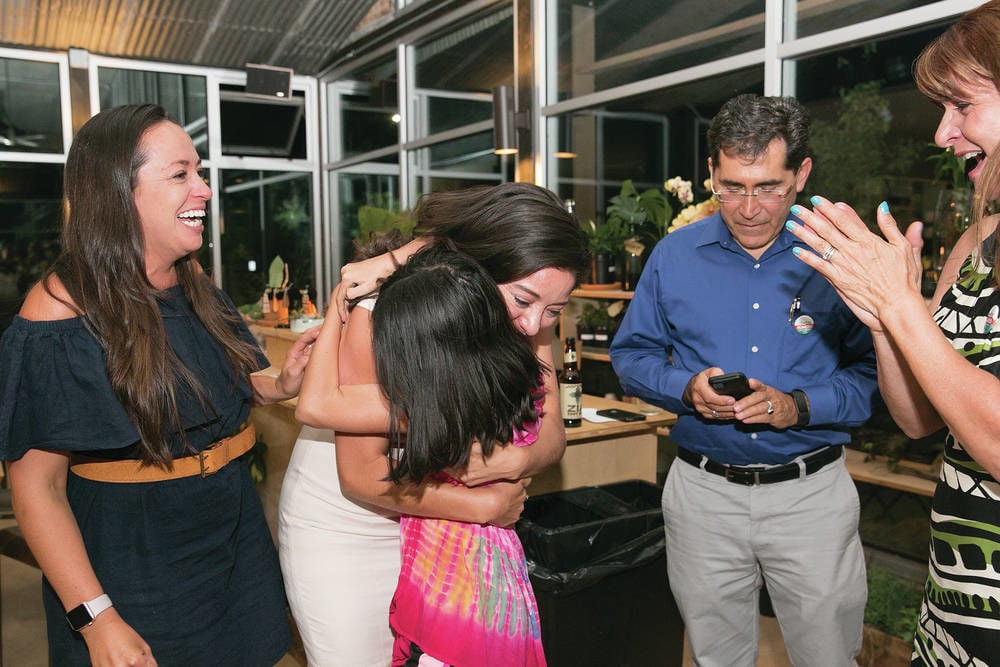 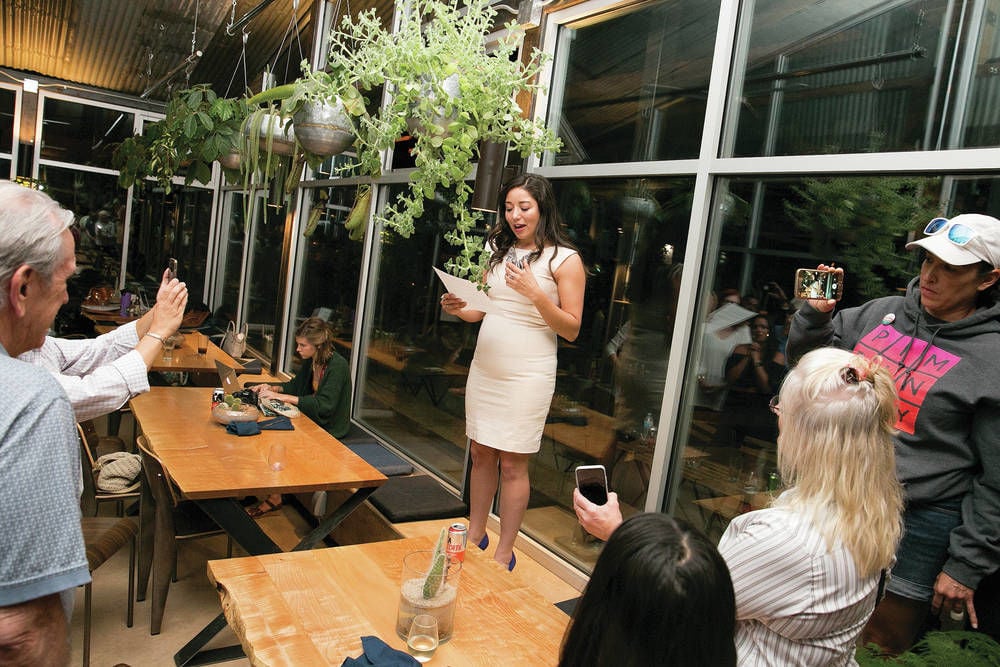 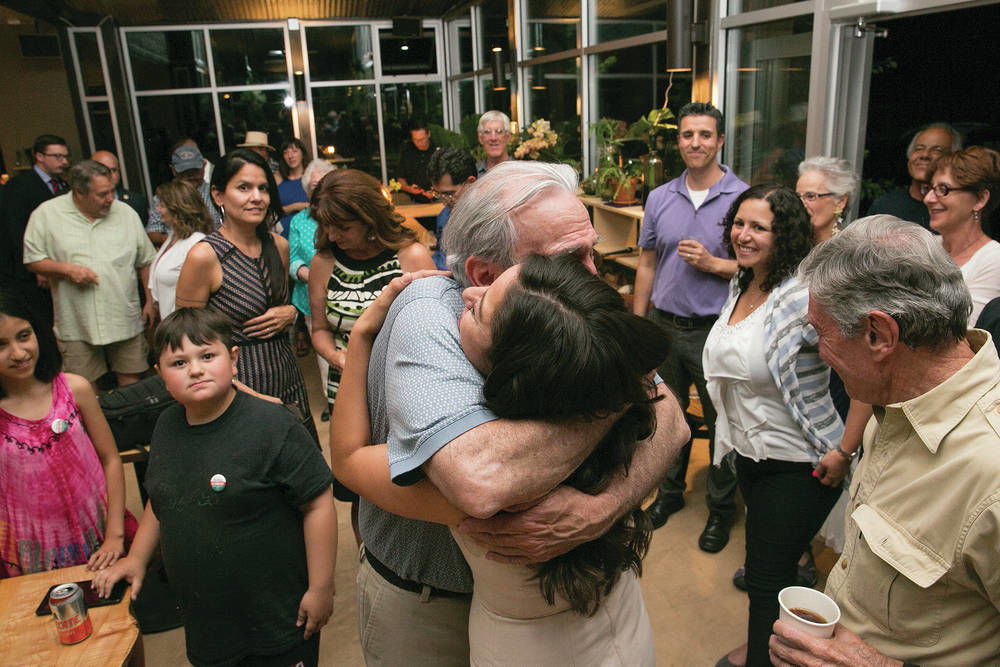 Andrea Romero reacts to news of her lead. Melanie Metz/For The New Mexican

Andrea Romero, center, laughs with her aunt, Donna Lopez, left, and her mother, Aundrey Lopez, during her primary election party at Opuntia on Tuesday. Melanie Metz/For The New Mexican

Andrea Romero reacts to the news of her primary win at Opuntia on Tuesday, June 5. Melanie Metz/For The New Mexican

“We got into this race because we believed we could have it better, and we will — we will,” a teary-eyed Romero told a roomful of family members and supporters gathered at Opuntia Cafe in the Baca District of the Santa Fe Railyard.

“When we started this movement — and now it’s begun — it was because we believed in the future New Mexico deserves,” said Romero, a 31-year-old Stanford University graduate who vowed to be a champion for progressive causes. “It deserves to have legislators who stand strong for what they believe in, where convictions for women, children, family and core Democratic values are uncompromising.”

Despite lingering questions about her past financial dealings, Romero edged out Trujillo, who was dogged by sexual harassment allegations.

“Taking on an incumbent is always a challenge, and for so many, this was extra special,” Romero said, generating laughs.

Trujillo did not return a message seeking comment late Tuesday.

With no Republican running for House District 46, which includes the northern end of Santa Fe County, four pueblos, a portion of Española and several small communities in between, Romero is virtually assured victory in the November general election.

It was a bitter and cutthroat race chock-full of mudslinging, acerbic campaign mailers and advertisements, and spending by political action committees representing vastly different interests, from Planned Parenthood to the oil and gas industries.

“When all was stripped away from the controversies, people really understood who were the people who were standing with Andrea: firefighters, our mayor, labor, pueblos,” said Neri Holguin, Romero’s campaign manager. “There were folks across this community that were saying, ‘We stand with her.’ ”

Holguin acknowledged that Romero, a government consultant and fledgling ostrich farmer who is also the director of MIX Santa Fe, did better in the more urban parts of the district.

Though she lives in the city, Romero, who attended school in Santa Fe but grew up in Nambé and Chimayó, said she is well suited to unite the rural and urban areas of the district because of her background.

Holguin said a last-minute push in support of Trujillo by an independent expenditure group funded largely by Chevron and Mack Energy “reinforced our message that Andrea stands with working families and Carl is too closely aligned with corporate interests.”

The backlash from the #MeToo movement also played a factor in Trujillo’s defeat. Trujillo called his accuser, a female lobbyist, a liar. And at one point, he described a fellow legislator leveling other sexual harassment charges against him as “a witch hunt.”

Trujillo went so far as to take a lie detector test, which he said he conclusively passed, though the questions Trujillo answered in the polygraph were not specific to the allegations lodged against him.

“It was largely how he responded,” Holguin said. “That was his undoing.”

A 51-year-old Los Alamos National Laboratory material science researcher who is also a homebuilder, Trujillo appeared to be coasting toward re-election until he was hit with sexual harassment allegations that prompted calls for his resignation, including from four Democrats in the Legislature.

The damage was swift and hard, especially in the midst of the #MeToo movement. The accusations resulted in a slew of negative mailers, including one that compared Trujillo to disgraced media mogul Harvey Weinstein and Republican President Donald Trump, who also have been accused of sexual misconduct.

The married father of four, Trujillo still faces an investigation by a House subcommittee under the Legislature’s new anti-harassment policy.

Romero, meanwhile, gave her critics plenty of ammunition over improper reimbursements she received for alcohol and Major League Baseball tickets during her tenure as executive director of the Regional Coalition of LANL Communities.

When a watchdog group unearthed the coalition’s travel policy violations, Romero asked the board of the public agency to investigate two of its members. Critics called her vindictive. Romero later apologized for how she handled the situation, though she was adamant that she was the target of a bigger political attack carried out by Trujillo’s supporters.

Romero tried to paint Trujillo as a politician who was out of sync with Democratic Party values. She pointed to his 2015 vote on a bill that would have banned certain late-term abortions, as well as what she called an “NRA-backed” bill that would have eliminated a fingerprint requirement and a two-year refresher firearms training course to renew a concealed carry license.

Trujillo countered the attacks by saying he has always supported Roe v. Wade, the U.S. Supreme Court decision that legalized abortion, and that his record reflects that he has “consistently voted for bills that further gun control.”

The back-and-forth between the two candidates and their supporters made the race one of the most closely watched — and perhaps the nastiest — in New Mexico.

The intense jockeying for votes, though, left a sour taste in some voters’ mouths.

The baggage each candidate brought to the race left some voters, such as local electrical contractor Don Gorman, 53, conflicted about their choices.

“I don’t know if what they’re bringing up against Carl Trujillo is accurate or not, but it seems to me that our media seems to exploit things and people take advantage of it,” he said. “And whether the lady Romero is running with good reason to want to run, to really improve, or if someone encouraged her to run because of Carl Trujillo having the Native American tribes going against him [and Romero] might back their interests, I’m not sure. All I know is it’s really ugly.”

“As far as him representing New Mexico, I think he’s done a good job,” Gorman said after voting at Montezuma Lodge in Santa Fe. “And I don’t know about Romero other than that there’s scandal against her, too.”

The race was so toxic that neither the editorial boards of The New Mexican nor Albuquerque Journal North endorsed either candidate.

Romero’s grandmother, Delfina Romero, said she always knew who would win the race.

“She’s done so many things in her short life that, let me tell you, I never doubted that she would get this because she gets what she goes for,” Delfina Romera said.