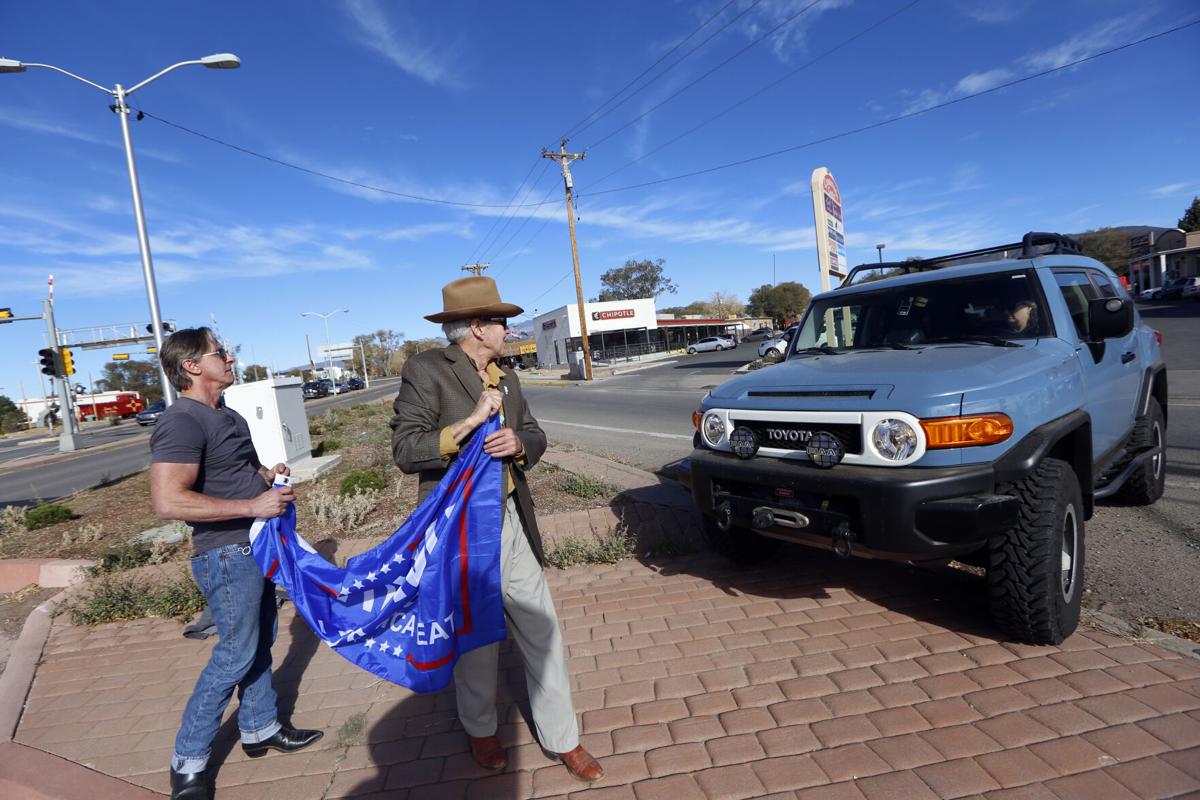 A woman in an SUV drives onto a median, stopping only a few feet away from Dan Wasko of Albuquerque, left, and Jeff Hengesbaugh of Glorieta as they held up a Trump flag Monday at the intersection of Cerrillos Road and St. Francis Drive. Some voters expressed fears of civil unrest in the aftermath of the election. 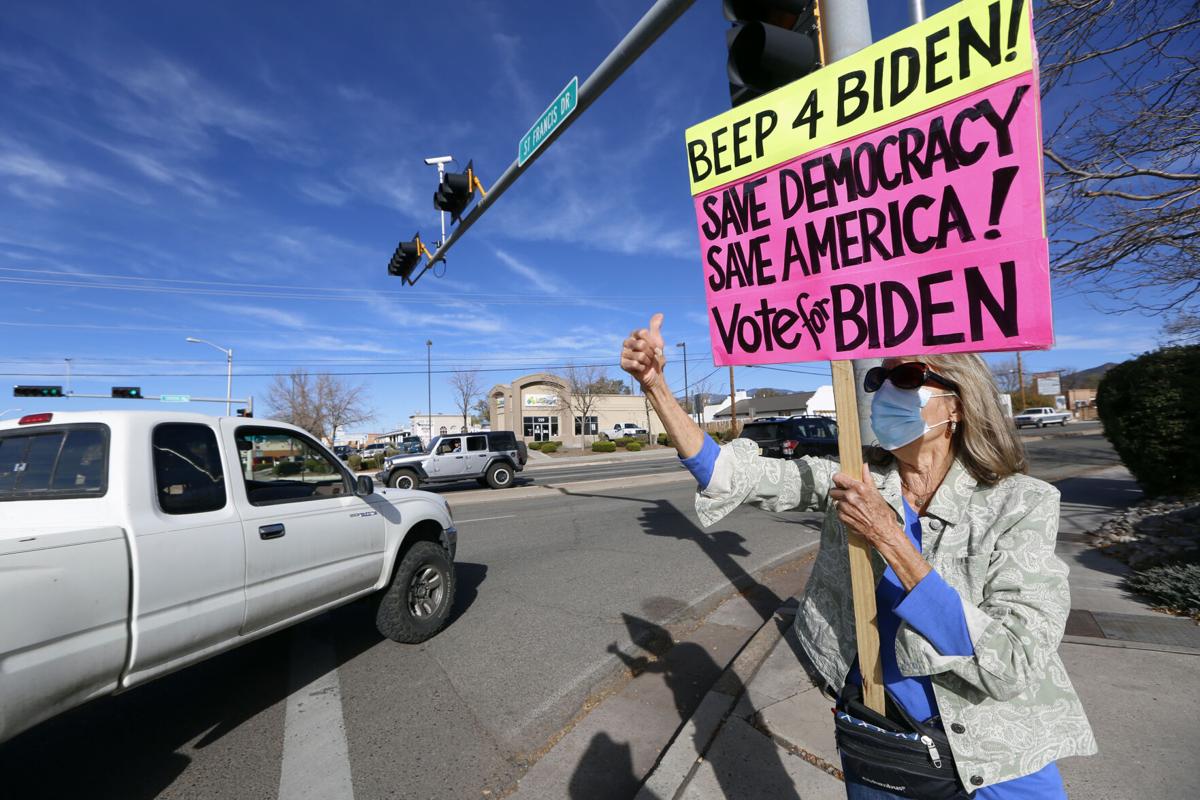 Linda Wilder Flatt of Santa Fe waves her Biden sign from the intersection of St. Francis Drive and Cordova Road on Monday. 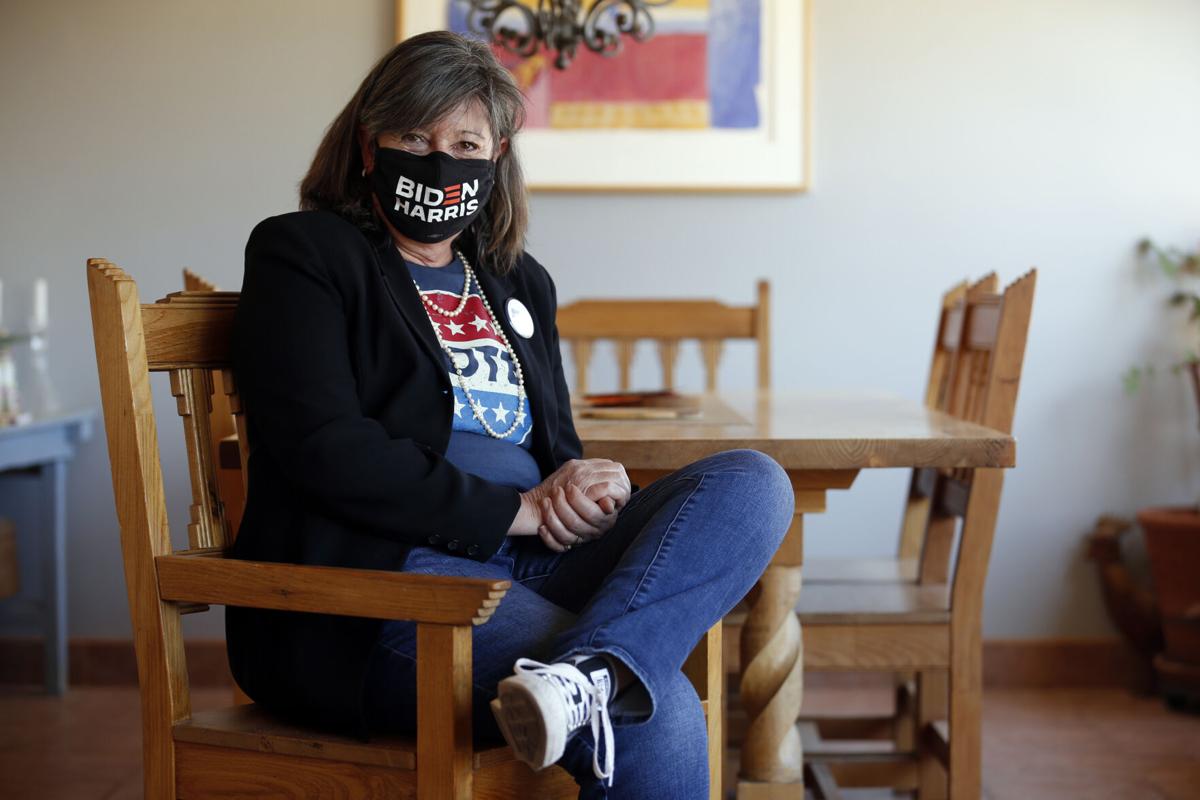 ‘I have gone through half a bottle of Tums. It just seems like my stomach is just so nervous,’ Victoria Murphy, former chairwoman of the Democratic Party of Santa Fe County.

Victoria Murphy is so nervous about the outcome of Tuesday’s high-stakes presidential election she can’t stop throwing up.

Over the last few days, Murphy said, the only food she’s been able to hold down are mashed potatoes and chicken enchiladas delivered by a friend.

“My husband keeps saying, ‘Why do you keep throwing up?’ ” Murphy, former chairwoman of the Democratic Party of Santa Fe County, said Monday. “I’m like, ‘I don’t know.’ I mean, I have gone through half a bottle of Tums. It just seems like my stomach is just so nervous.”

Like other voters and election officials around the country, Murphy is bracing for more heartburn amid predictions of a protracted vote count stemming from high turnout and a record number of mail-in ballots as Americans try to limit their exposure to COVID-19. It could leave some results in limbo for days — not to mention a possible legal challenge by Republican President Donald Trump that could draw out the drama even longer if he loses the race.

Voters in Santa Fe County say they’re anxious and also eager for the election to be over but recognize there could be delays.

“What I’m hoping is that the numbers will be so overwhelming that one side isn’t going to really have anything to [expletive] about,” Matthew Fiorina said last week after voting at the Santa Fe County Fairgrounds for Democrat Joe Biden.

“I know for me, if it’s flip-flopped and Donald Trump wins by a lot, I’ll take my medicine and move on,” he said.

Cameron Gonzales said in Monday she’s feeling mixed emotions heading into Election Day, from apprehension to excitement. This year marks the first time the 21-year-old has voted in a presidential race.

“Part of me wants to really have a lot of hope, just believing that this will go well and there won’t be much civil unrest and everything will be fine,” said Gonzales, the daughter of former Santa Fe Mayor Javier Gonzales. “But I think another part of me finds it really difficult to internalize that hope.”

“First, civil unrest,” she said. “I think there’s there’s a lot of fear as to what’s going to happen tomorrow, the days leading up to the actual inauguration, so that’s definitely concerning.”

The other reason for her anxiety comes from a generational perspective, Gonzales said.

“I’m a senior in college now, so I’m about to graduate into just this horrible economy with no jobs,” she said, adding climate change and women’s reproductive rights are issues of concern she shares with friends her age. “There’s definitely a lot of generational fear as to what happens with another Trump presidency.”

“I’d like it to be over by Tuesday evening,” he said about the race for president. “It would help with the nervousness of the coronavirus and the compound problems with voting and everybody — how would you say it? — being mean with each other. Let’s get back to being normal.”

Unlike Gonzales and Fiorina, though, Salazar said he believes Trump is the better candidate to lead the nation; he voted for Trump in 2016 and again this year.

“Ever in the history of the United States, nobody has ever given me one penny from the government. Mr. Trump tried to help, and he gave me and he gave my wife money, so we were able to continue on,” Salazar said, referring to pandemic-related stimulus checks the couple received from the federal government.

Fiorina didn’t vote in the last presidential election because he wasn’t sure which candidate — Trump or former Secretary of State Hillary Clinton — “was the lesser of two evils.”

Another voter, Aurore Loranger, said she, too, sat out the last presidential election, as well as the one in 2012. She said she wasn’t “emotionally invested” in the outcome.

Not this time, though.

Instead of sitting out another election, Loranger said she will be sitting in front of her television with her cat, Hakonnen, anxiously awaiting the results Tuesday night. But she’s prepared to go to bed not knowing which candidate won.

“I’m not going to be glued to my TV set, either, because what’s going to be will be,” she said.

Murphy, the former chairwoman of the county’s Democratic Party, said she doesn’t expect the outcome of the race to be known for at least several days.

She pointed to the June primary, when it took the office of Santa Fe County Clerk Geraldine Salazar 3½ days after the polls closed to finish counting ballots, leaving a few races hanging in the balance and forcing Salazar to petition a court to extend her deadline for results. Though polls show Biden ahead of Trump, Murphy said a lot of uncertainty hung over the country on the eve of Election Day.

Outgoing District Attorney Marco Serna said he’s excited about the election, and hopeful Biden will win, but also uneasy about how Trump might react if he loses.

“I’m scared because you don’t know what Trump will do,” he said in a phone interview Monday. It’s also frightening to consider another thing, Serna added: “what he will encourage his followers to do.”

Steve Pearce, chairman of the Republican Party of New Mexico, said he’s sure voters are ready to move past the election.

“But there is a kind of excitement, and the future of the nation hangs in the balance,” he said. “Yeah, there is some nervous energy about it, but I’m enjoying the process myself.”

Polls will be open for the general election from 7 a.m. to 7 p.m. Tuesday. Voters in Santa Fe County can cast a ballot or drop off an absentee ballot at any of the following 30 voting convenience centers (sites are in Santa Fe unless otherwise noted):

• By Sunday, more than 770,000 New Mexicans already had cast ballots for Tuesday's general election, either in person or by mail.

• Saturday was the last day to vote early in person and to register to vote for the general election.

• Democrats have outnumbered Republicans so far, casting 375,995 early and absentee ballots, compared to 267,707 for Republicans.

• More than 116,000 voters who declined to state a party affiliation had cast a ballot by Sunday, along with over 5,800 Libertarians and nearly 5,100 voters who registered with other parties.

How about we all just cheer on the fact that those early warnings about militias and other violence around our NM polling sites seems to have been a false alarm and that a record number of people voted.

Gee, we were warned about right wing militias, not about people assaulting Trump supporters with SUVs. What did the New Mexican miss?

Right wing militia peeps don't really have the courage to be active in northern New Mexico. Mostly out of state activists with no real interest in NM. Perhaps south of Albuquerque and around the Texas border where they are accepted. I wonder what would happen if these do called militia peeps showed up in Las Vegas, Espanola or in Mora?

The same thing that would happen if a bunch of Antifa thugs showed up in Boise Idaho. So what?

Just an observation Emily. But on the other hand , Antifa doesn't have what it takes to come to Northern New Mexico either. Guess you haven't been there either

The NY Times is saying that nationally, so far, there have been few disruptions. I was as concerned as anyone but lacking actual factual instances of disruptions and the fact that the lion's share of folks already voted, I thought that recent article in the New Mex was making a mountain out of a molehill.

Oh, well, gosh. Maybe the story of the Trumpf goons closing bridges in NY and NJ, and blocking roads to polling places in Atlanta, not to mention trying to run the Biden bus and escort vehicles off the highway overshadowed the fact that an SUV drove up onto the median where a couple of people were holding a flag displaying their ignorance, where there was no damage or injuries, and no reported threat.

Hmmm, pedestrian vs vehicle may not end well. Vehicles blocking other vehicles, not so much. Your logic is flawed.

Having been hit by a car and been deliberately run off the road in another instance, I'll take my chances avoiding the ditch. The article from several days ago said we should be very worried in New Mexico. So far, crickets. I am sure you are disappointed as you would like to brand all Trump supporters as evil.

The only thing that surprises me is that the driver was not in a Prius or a Subaru.

Musta been one of those few climate change denying Democrats. Like all the ones in town driving SUVs.

She should've been sited! No matter your political preference, driving up on a median with intent to hit (or scare) is assault with a motor vehicle! How is this okay?!

It does constitute assault. I looked it up.