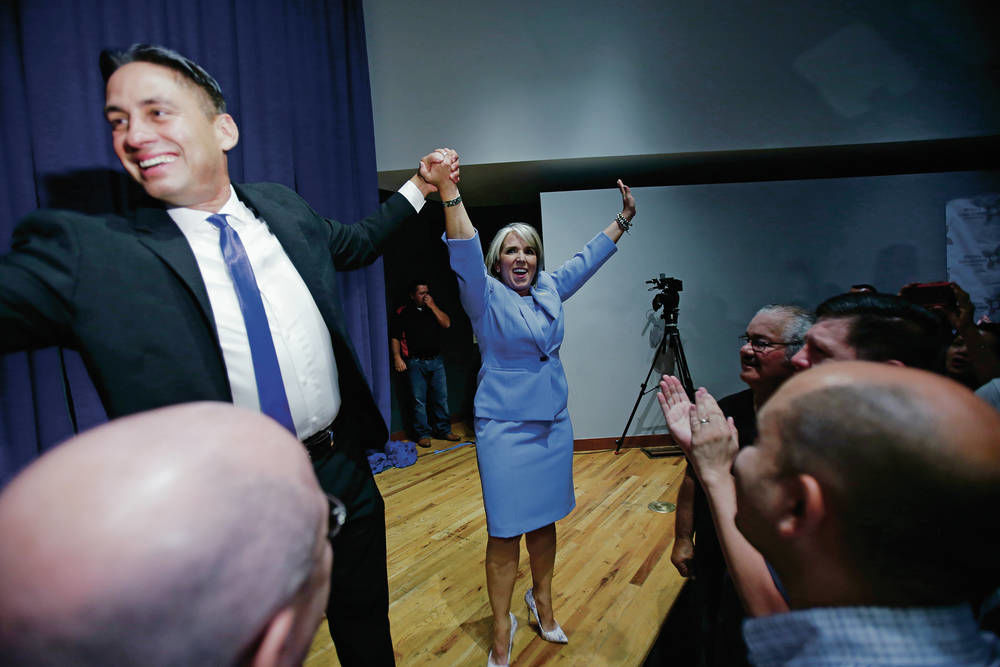 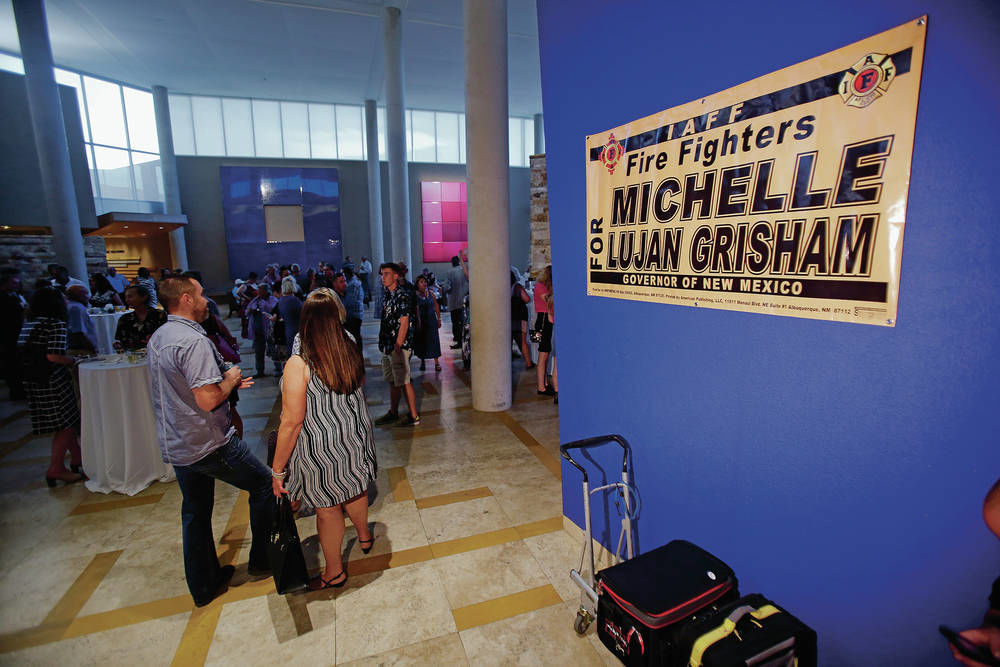 People wait for Michelle Lujan Grisham to arrive at her party at Albuquerque Museum on Tuesday, June 6, 2018. The unofficial results were showing Lujan Grisham at 70%. Luis Sánchez Saturno/The New Mexican 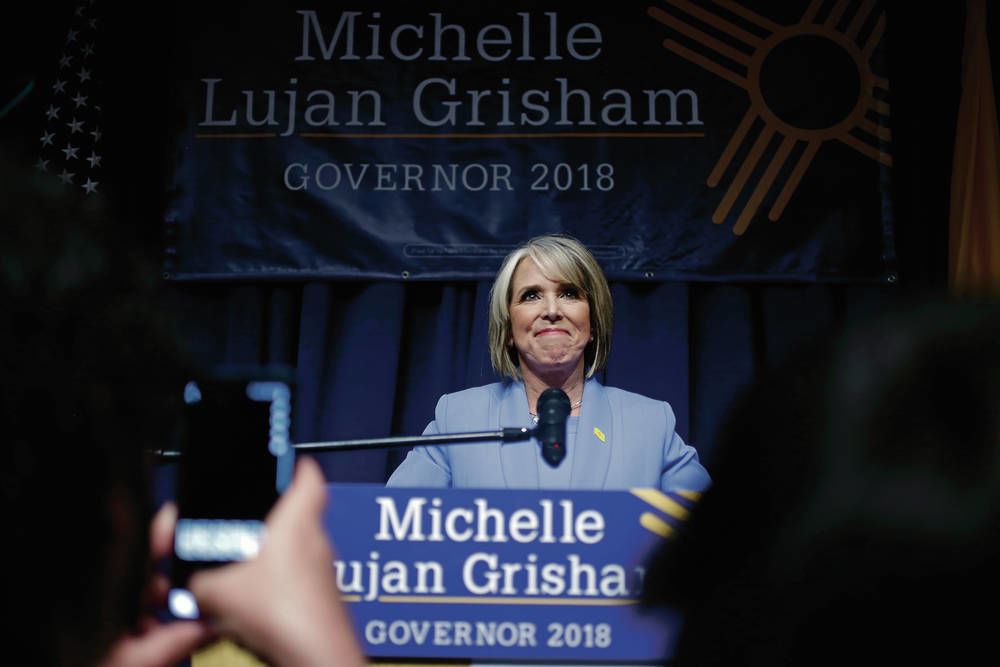 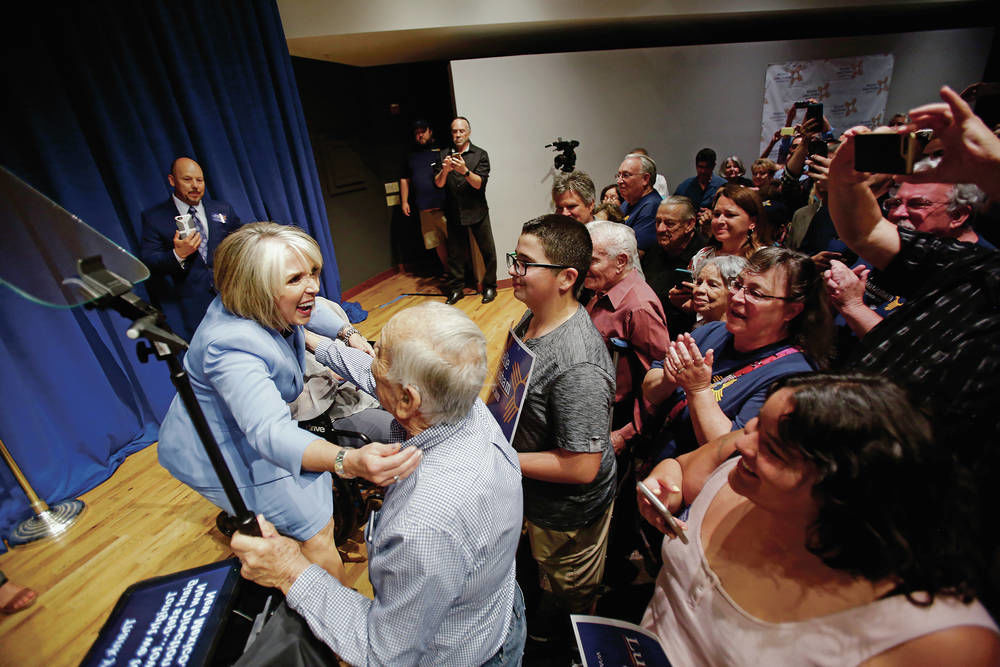 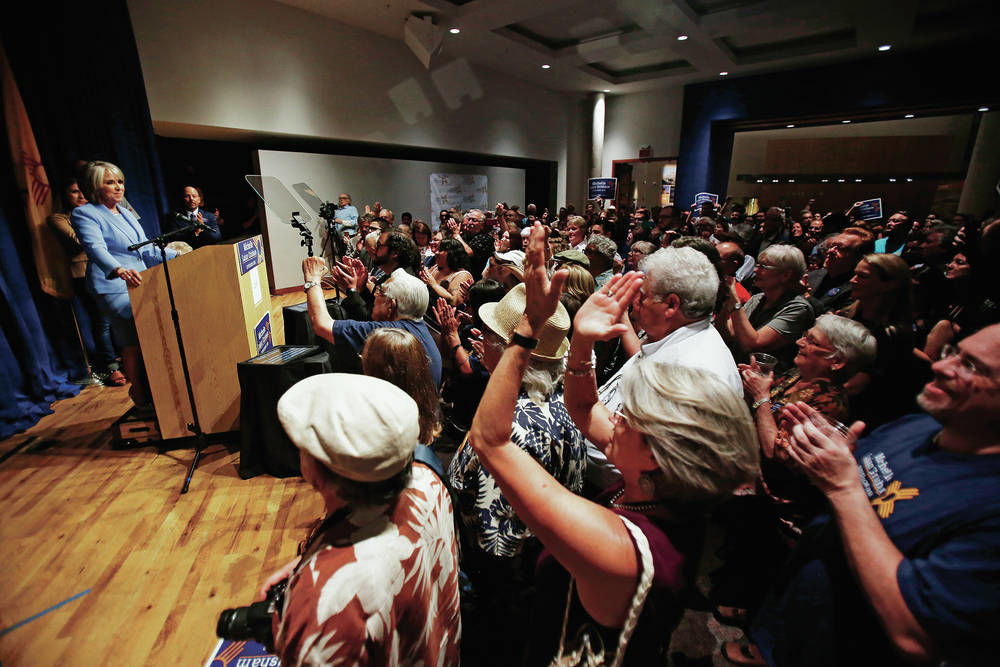 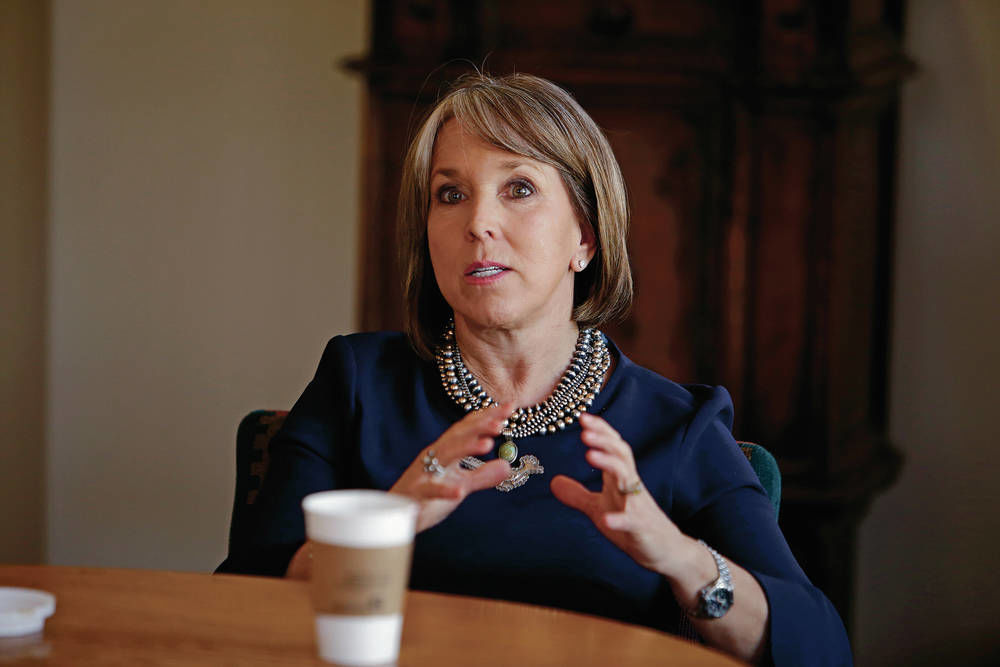 People wait for Michelle Lujan Grisham to arrive at her party at Albuquerque Museum on Tuesday, June 6, 2018. The unofficial results were showing Lujan Grisham at 70%. Luis Sánchez Saturno/The New Mexican

ALBUQUERQUE — New Mexico Democrats overwhelmingly chose U.S. Rep. Michelle Lujan Grisham on Tuesday to carry the party’s banner in the race for governor after nearly eight years out of power and a decade of economic malaise.

Democratic voters turned out in greater numbers than they did in the last two gubernatorial primary elections, handing the Albuquerque congresswoman a resounding victory. Lujan Grisham was on track to win well over half the votes in the three-way race with 66 percent late Tuesday night.

Lujan Grisham will face off against Republican Congressman Steve Pearce over the next several months leading to the November general election.

And the heightened interest in the primary bodes well for Democrats. But it is now in large part up to Lujan Grisham and her running mate for lieutenant governor, state Sen. Howie Morales, to parlay her party’s frustrations with President Donald Trump and outgoing Gov. Susana Martinez into a victory on Nov. 6.

Addressing supporters at the Albuquerque Museum, Lujan Grisham launched into a victory speech heavy with policy priorities that would appeal to the party’s base.

She described the primary election victory as “a giant step towards increasing the minimum wage and raising the pay for more than 100,000 New Mexicans” and a “giant step toward jump-starting New Mexico’s economy by investing in infrastructure, small businesses, apprenticeships, and skills training for workers.”

She added: “Gone are the days we treat health care like a privilege.”

But Lujan Grisham also alluded to the expensive and vicious race that is likely ahead.

In the last weeks of the primary campaign, her opponents, Albuquerque businessman Jeff Apodaca and state Sen. Joseph Cervantes, had attacked the congresswoman over her past business dealings with the company that manages New Mexico’s health insurance program for people with particularly expensive medical conditions. They have depicted the congresswoman as having, at best, a conflict of interest.

Not only did she shrug off those questions Tuesday night, she suggested “the Russians and Wikileaks could learn some things about how to spread falsehoods and phony stories” from the attacks against her.

And she said those attacks will be “nothing compared to the negative campaign of distortion and lies we are likely to see from the national Republican Party.”

The race was not close. Late Friday, Apodaca had 22 percent of the vote and Cervantes had about 11½ percent.

Lujan Grisham, 58, had launched her campaign before either of them in December 2016. Apodaca, the son of former governor Jerry Apodaca, entered the race in May 2017. Cervantes, of Las Cruces, launched his campaign in July 2017.

But other well-known and well-funded potential contenders, such as U.S. Sen. Tom Udall and Attorney General Hector Balderas, stayed out of the race.

Lujan Grisham steadily consolidated support among labor unions and major environmental groups while building a statewide campaign that dwarfed the field operations of her competitors. By the end of last month, her campaign had about $1.1 million on hand.

For the most part, Lujan Grisham was unflappable, carrying herself like a front-runner.

Apodaca, 56, rallied some in the progressive wing of the party, particularly with his focus on legalizing marijuana. He did not concede Tuesday night, but told The New Mexican he was disappointed in the results and was “not kidding himself.”

Meanwhile, Cervantes, 57, funded his campaign mostly out of his own pocket and performed well in debates, coming off as a serious, seasoned candidate. The lawyer from Las Cruces did concede, noting that he never managed to tap into the significant share of voters around Albuquerque.

The campaign had been fraught at times.

Morales, 45, steadied the Democratic primary for lieutenant governor after state Sen. Michael Padilla of Albuquerque dropped out amid new questions about years-old lawsuits accusing him of creating a sexually hostile work environment in another job.

Padilla had been the front-runner and a flurry of candidates jumped in after his departure. But Morales, who ran unsuccessfully in the Democratic primary for governor four years ago, managed to consolidate support quickly, particularly from teachers unions.

Meanwhile, in December, a transgender woman said she was discriminated against during an internship in Lujan Grisham’s congressional office. Lujan Grisham denied the allegation.

Still, these issues and the questions about her business in the health care industry will be at best distractions as Lujan Grisham campaigns for governor over the next several months.

Meanwhile, Pearce has been building his war chest, emerging unopposed from a one-man primary election with a financial advantage over Lujan Grisham, not to mention the advantage of going into the general election unsullied by party infighting. Pearce will be joined in the race by the Republicans’ nominee for lieutenant governor, Michelle Garcia Holmes of Albuquerque.

The political newsletter Inside Elections has labeled the race for governor as leaning Democratic.

The final tally Tuesday night seemed on track to give Lujan Grisham a bigger primary victory than polls had suggested.

Whether she can ride that support to the Governor’s Office will hinge on whether Democrats are motivated to turn out again in November. And to that end, Lujan Grisham signaled that part of the Democrats’ task will be to galvanize voters not only around the race for governor but around pushing back after some stinging losses for Democrats over the past several years.

“Do we want our state to be defined by the bankrupt and intolerant values of Donald Trump?” She asked the crowd to boos. “… Do we want the values of hyperpartisanship and obstruction that we see in the tea party Congress that Steve Pearce has embraced?”