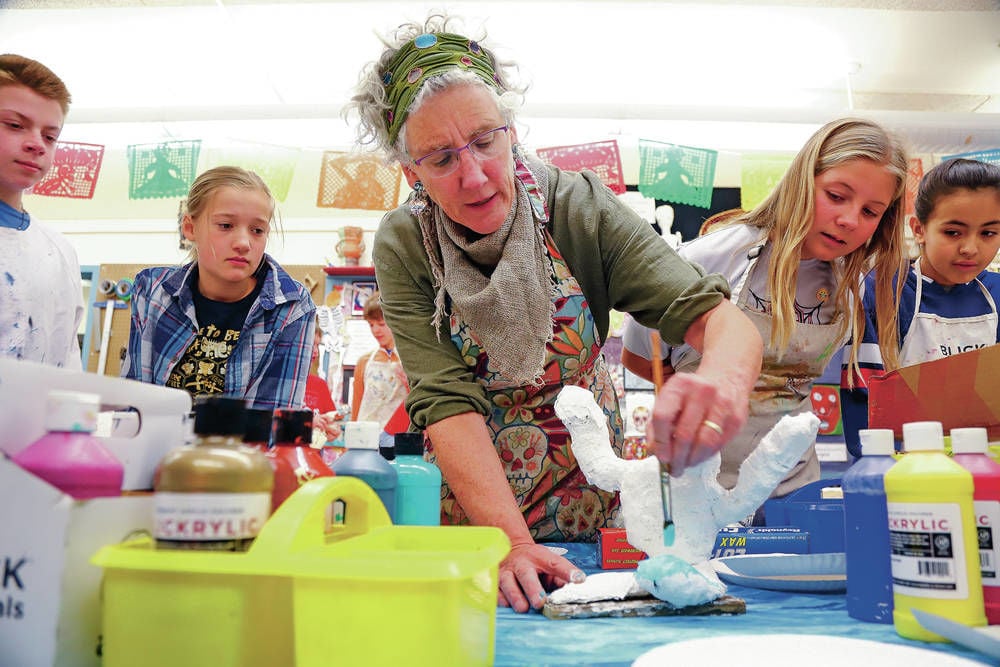 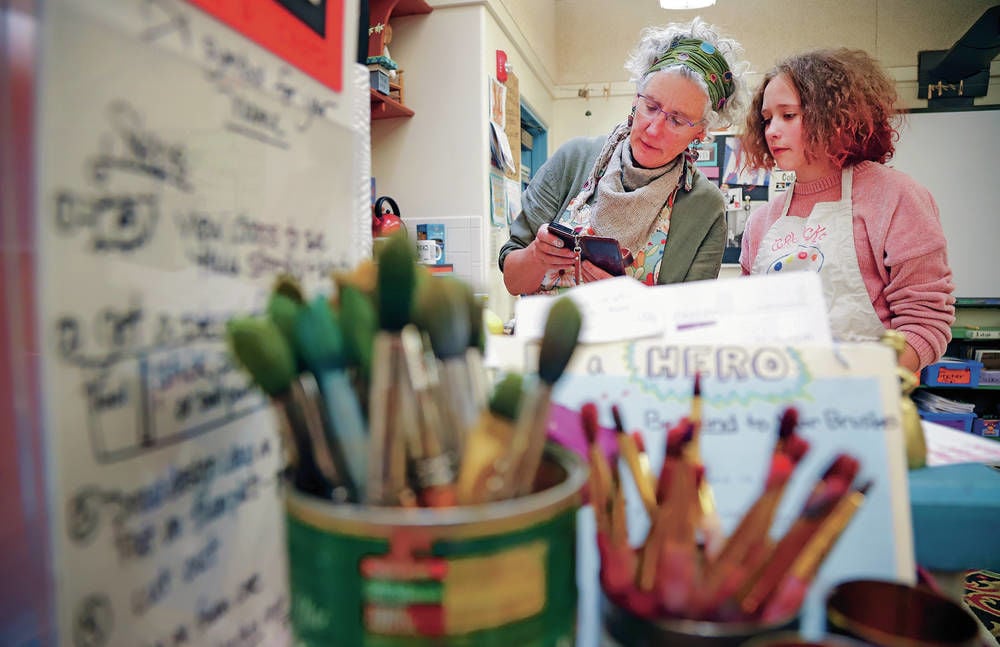 Visitors to Mary Olson’s classroom at Wood Gormley Elementary School are greeted with all the odors of art supplies: paints, pigments, clay, glue and charcoal.

These scents of creativity permeate the room, a place where children explore methods of expression and adventurously make things.

“Art takes you into a lot of other things in the world,” said one of Olson’s students, a third-grade girl who was toiling away on a papier-mâché project on a recent day.

“Miss Mary Olson is a good teacher,” the girl said, “because she helps you a lot with each project. And she doesn’t judge you.”

Taking her students into new worlds with art is one of Olson’s goals.

“Kids and creativity,” she said as she gestured toward her students. “Just hanging out here, you can see the results. It’s fresh and alive.”

Olson, 58, recently was named New Mexico’s Arts Educator of the Year by the New Mexico Art Education Association. The award is an honor, said the Chicago native, who has been tinkering with artistic projects since she was a child.

The award, she added, excites her for its acknowledgement of the important role art plays in public education.

Steve Heil, who works in the special-education department of Santa Fe Public Schools, nominated Olson for the award. In his nomination letter, he praised her ability to involve visiting artists and the outside community in her classroom.

“She listens and learns from her students,” Heil wrote. “She follows others into new territory that is interesting and artistic.”

“They’re supposed to struggle and solve problems and come up with their own ideas,” she said.

And if they fail?

“That’s fine,” Olson said. “They can turn it into something else, which happens to professional artists all the time. … You end up throwing something out and starting all over again.”

Some of her kids knew exactly what they were making as they applied layer after layer of newsprint to their papier-mâché creations.

But some proclaimed that they had no idea what they were making — nor did they care.

The best part, said fellow student Reyes Beals, is that their “hands get really messy.”

Olson has been teaching at Wood Gormley for 16 of her 36 years as an educator.

As a child, she loved to “make stuff,” as she put it, in her grandfather’s workshop at his home. But she really fell in love with children and arts education while serving as a summer intern at the Bemis Art School for Children in Colorado Springs, Colo., in the early 1980s, after she graduated from the University of Colorado in Boulder.

Within a year, she had moved into a teaching job at the Bemis Art School.

She also taught art at an array of private and public schools in Colorado before coming to Santa Fe Public Schools in 2003. Since then, she has become known for inviting professional artists, including some from the growing Meow Wolf collective, to offer workshops in her classroom.

Last spring, she and her students created an immersive oasis all over the school to highlight the challenges facing the world’s coral reefs as they struggle to survive in an era of global warming.

As part of a wool arts project, she had a regional sheep shearer come in to demonstrate to kids how to give the animal a haircut.

Olson said she’s working her dream job. “Kids and art — how can you go wrong?”