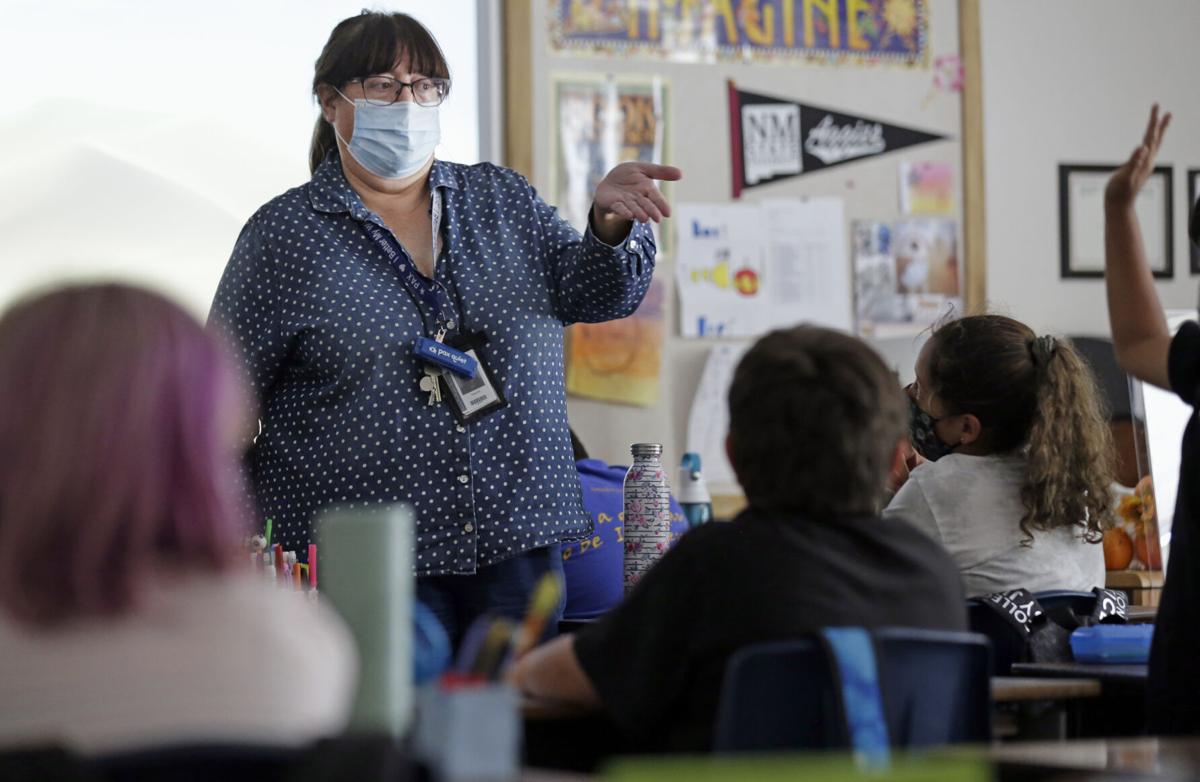 Anne Brito teaches fourth- and fifth-grade students in a combined class Monday at Sweeney Elementary School. The school has five vacant teaching positions and substitutes are hard to find. 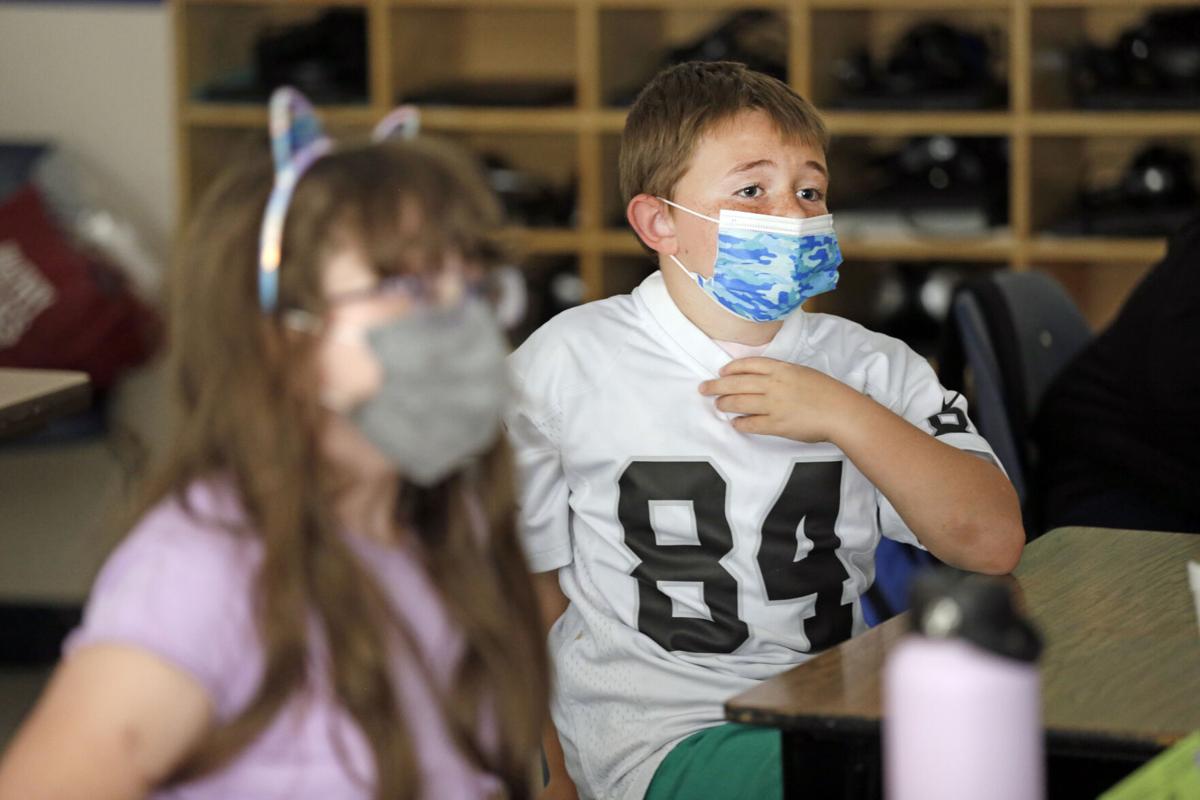 Anne Brito teaches fourth- and fifth-grade students in a combined class Monday at Sweeney Elementary School. The school has five vacant teaching positions and substitutes are hard to find.

With five teacher positions still unfilled at Sweeney Elementary School nearly two months into the school year — and substitutes hard to find — Principal Dolores Montaño-Peña has had to get creative.

She’s combined students in different grades, using assessment data to determine where to place each child.

She’s overhauled curriculum to accommodate a wide range of skill levels in each classroom.

Montaño-Peña and her assistant principal also have taught classes to ensure teachers have some prep time.

As students returned to classrooms after more than a year of learning was disrupted by the coronavirus pandemic, closing campuses and shifting lessons online, schools in Santa Fe and statewide have been struggling with a combination of teacher vacancies and substitute teacher shortages.

Meanwhile, Montaño-Peña said, volunteers who usually help in classrooms, tutoring students who are trying to catch up to their peers, are nowhere to be found. She hopes to see that change after kids under 12 can begin receiving the COVID-19 vaccine and volunteers feel more comfortable visiting the school.

Superintendent Hilario “Larry” Chavez said in an interview Monday the staffing issues at Sweeney are particularly pressing, but teacher openings persist in other Santa Fe schools as well — including at Desert Sage Academy, the district’s only online option.

That compares with 1,048 teacher vacancies statewide this month, according to preliminary data from New Mexico State University. That’s up from 571 at this time last year, researcher Rachel Boren told state lawmakers on the Legislative Finance Committee during a hearing Tuesday.

Oechsner said on any given day in the district, there are 120 or more teacher absences or vacancies to fill. About 75 spots remain after 45 or 50 substitute teachers on the district’s rolls sign up to work for the day, he added.

This year, the district has a pool of 115 substitutes. Usually, it has at least 200. Since the coronavirus pandemic hit in early 2020, however, the number has declined.

District administrators and school principals have been regularly relying on teachers to take over combination classrooms and sell their preparatory periods to help fill gaps amid a scramble to recruit substitutes.

“Until everything is filled, we’re constantly having our attention diverted to taking care of putting people into those positions,” Oechsner said. “That takes a lot of time on the part of our principals and our department heads.”

Oechsner also said the district has seen more resignations than usual this year — a couple each week.

Montaño-Peña said several former teachers at Sweeney, on the city’s southwest side, have left their jobs to care for aging parents or kids.

In the past, she would receive a stack of applications for each teacher vacancy and would conduct interviews with a hiring board. Now, she said with a laugh, it feels more like the few candidates who apply for open positions are interviewing her.

“It’s so interesting to see that shift,” Montaño-Peña said.

When her teachers — many of them new hires and some from outside the United States — had to attend mandatory training sessions last week and there were no subs available to fill their classrooms, Montaño-Peña put younger students at Sweeney on a rotating, twice-daily schedule of special classes like physical education.

“It worked out really well,” she said. “At the end of the week, though, my [elective teachers] were exhausted.”

Montaño-Peña is still optimistic that as more teaching positions are filled at her school, which serves about 350 students, the kids will get back into classrooms with same-grade peers later this year.

The hunt for teachers and substitutes during the ongoing pandemic is a nationwide issue. California saw a drop of 17,000 licensed substitutes between the 2018-19 school year and 2020-21, according to a recent report in Business Insider.

School districts across the nation are offering raises to draw more substitutes.

Santa Fe Public Schools hosted two job fairs this summer to recruit substitutes and professionals in other fields who were interested in pursuing an alternative pathway to a teaching license. The efforts led to 18 new hires in July; another 11 offer letters were sent to prospective hires in August.

But Oechsner said bus drivers are still doubling up on routes, and administrators licensed to drive buses have been stepping in to help.

A job fair scheduled Thursday — from 3:30 to 6 p.m. at the Nye Early Childhood Center — will be open to people interested in becoming educational assistants.

The Public Education Department recently announced it was investing $37 million in federal pandemic relief funds to an initiative that will help districts pay for new educational assistants, with a goal of increasing adult-to-student ratios in classrooms. The closing date for New Mexico’s 89 school districts and about 60 start-chartered schools to apply for the funding was Monday; the agency said it had received 44 applications.

Low pay has been a barrier to building the state’s teacher workforce, educators and advocates have said.

New Mexico’s minimum pay for teachers is based on a three-tiered system, depending on the level of education and experience. Entry-level teachers now start at $41,000 a year.

“Higher salaries would be a great benefit to us as we try to recruit teachers, as we try to encourage our current students to go into the colleges of education to become teachers,” Oechsner said.

“My staff have been superheroes,” she said.

Perhaps they should have stayed with online classes this year? Why the rush for this chaos, other than politics?

It sounds like it's taking a lot of creativity in covering classes. Hopefully, people will see a way to work in the schools. Maybe asking retired teachers to be substitutes might be something to explore.