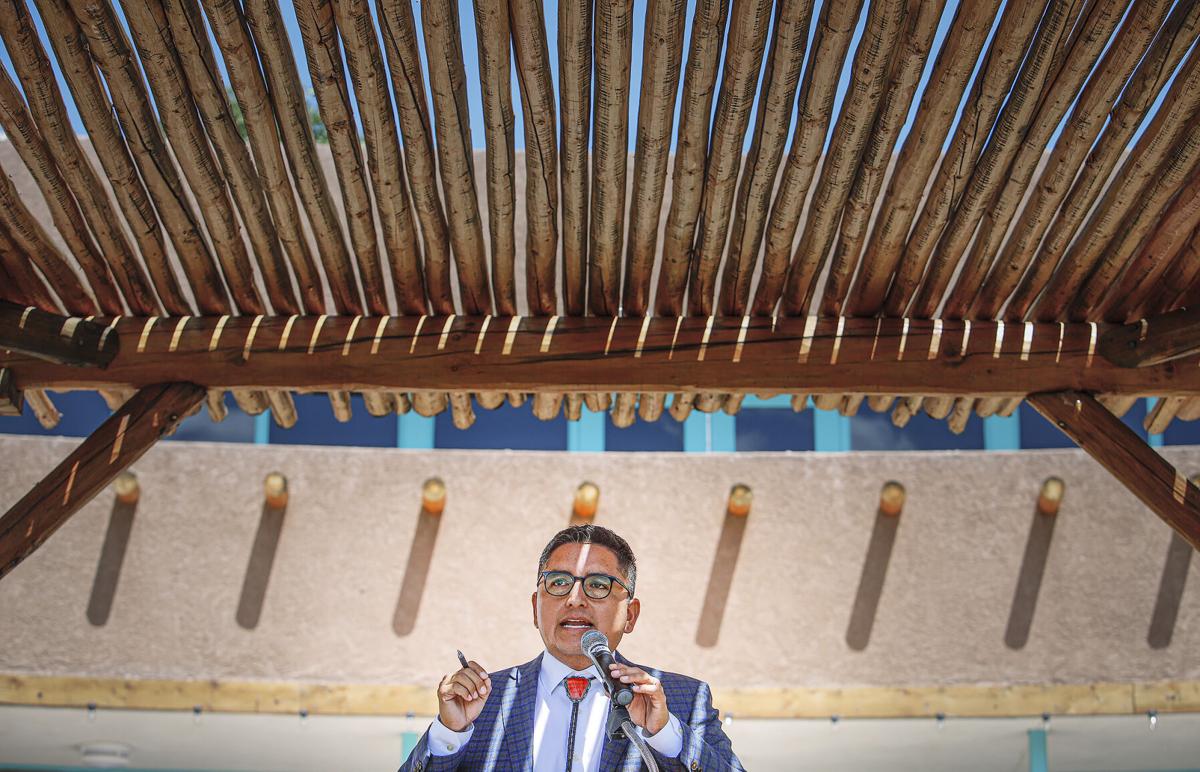 State Rep. Derrick Lente, D-Sandia Pueblo, speaks to a group of tribal leaders, educators and legislators assembled Friday in the courtyard of the Indian Pueblo Cultural Center in Albuquerque. 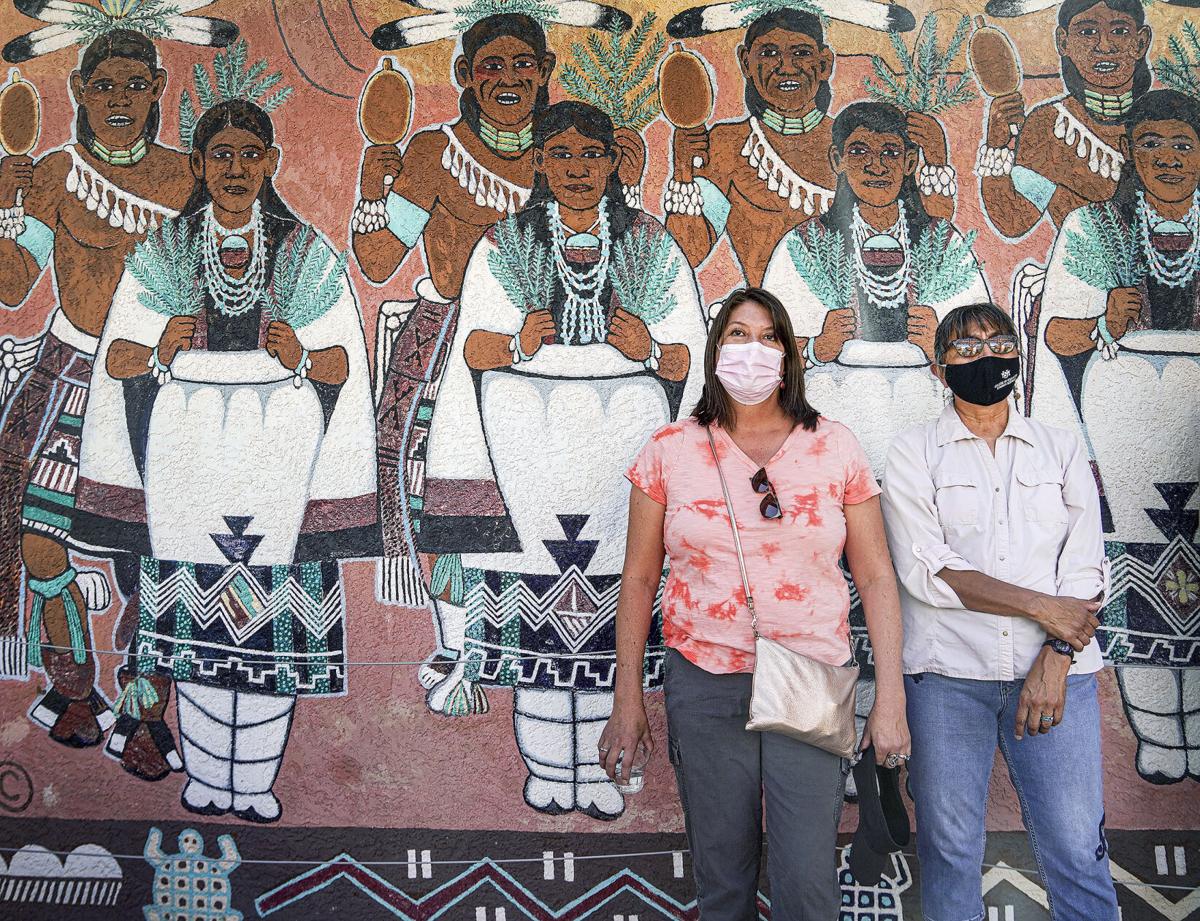 UNM professors Tiffany S. Lee, who is Diné/Lakota, and Glenabah Martinez, who is Taos/Diné, listen to speakers Friday at a gathering calling for an end to systemic racism in the state's public schools. 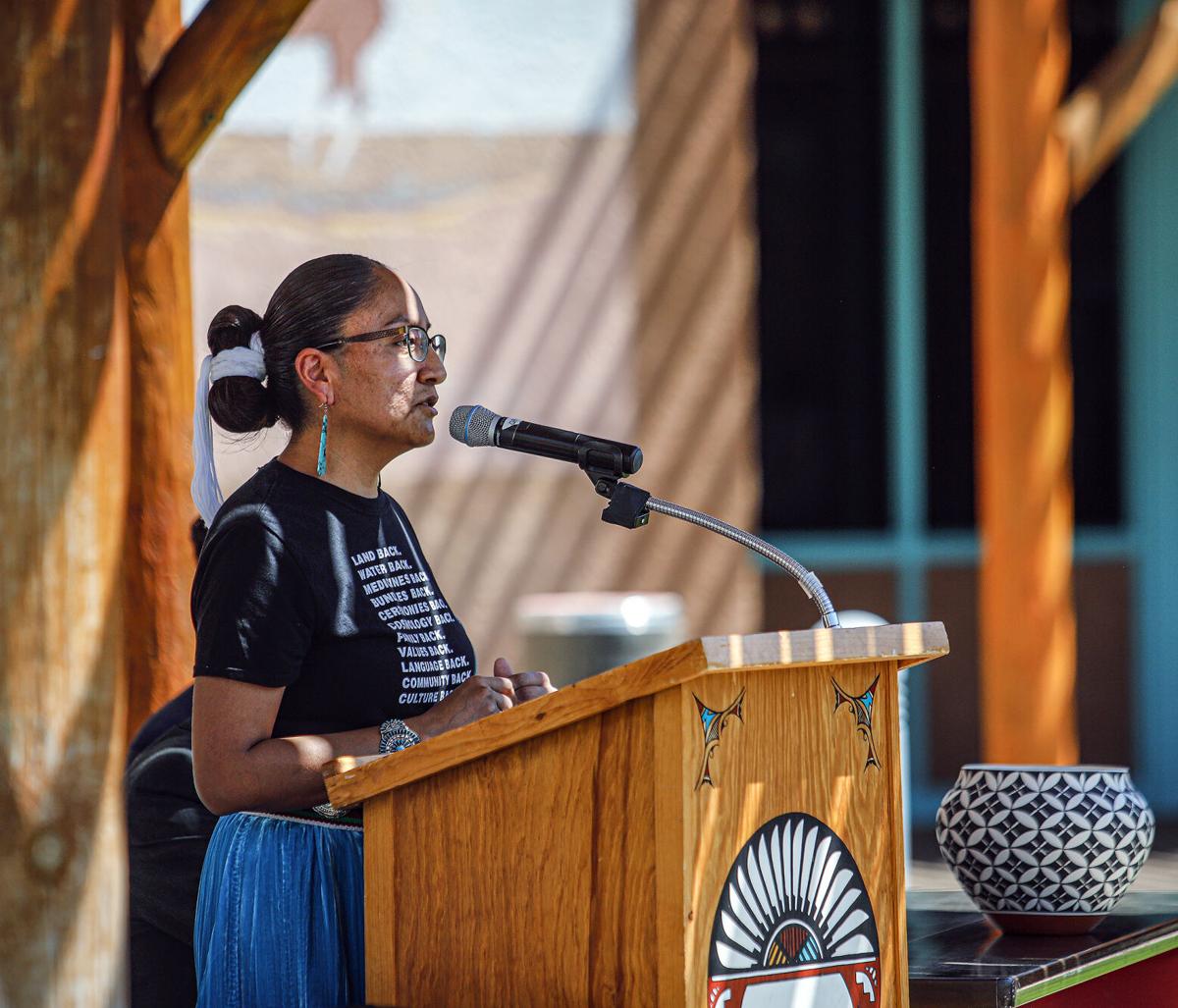 Wilhelmina Yazzie, a plaintiff on her son’s behalf in the state’s landmark education lawsuit that bears her name, speaks at Friday’s gathering calling on the state to end systemic racism against Native students in public schools.

State Rep. Derrick Lente, D-Sandia Pueblo, speaks to a group of tribal leaders, educators and legislators assembled Friday in the courtyard of the Indian Pueblo Cultural Center in Albuquerque.

UNM professors Tiffany S. Lee, who is Diné/Lakota, and Glenabah Martinez, who is Taos/Diné, listen to speakers Friday at a gathering calling for an end to systemic racism in the state's public schools.

Wilhelmina Yazzie, a plaintiff on her son’s behalf in the state’s landmark education lawsuit that bears her name, speaks at Friday’s gathering calling on the state to end systemic racism against Native students in public schools.

ALBUQUERQUE — Wilhelmina Yazzie’s eldest son, Xavier Nez, was a fourth grader when she became a plaintiff in a landmark lawsuit that found the state’s public education system failed to provide several groups of at-risk students an adequate education.

Nez graduated from high school in Gallup this year. But his mother on Friday called for quicker action on the lawsuit that bears her name in the courtyard of the Indian Pueblo Cultural Center, where dozens of tribal leaders, educators and legislators gathered to pressure the state to do more.

During a Friday news conference, several speakers, including Yazzie, also took aim at the swirling controversy over the status of Legislative Education Study Committee director Rachel Gudgel, who made racist remarks about Native Americans while on the job. A panel of state legislators deadlocked 5-5 last week on whether to fire Gudgel, which allows her to keep her influential position.

When Yazzie addressed the controversy, she fought tears as her voice broke.

Though several Pueblo, Navajo and Apache leaders joined Yazzie in demanding a more culturally relevant education for their students and correcting a public education system they say is rife with inequities, they again called for Gudgel to be removed from her job two days after she issued a public apology.

Zia Pueblo Gov. Jerome Lucero called for Gudgel’s immediate removal in an emotional speech in which he referred to the Zia symbol, which adorns the state flag.

“It hurts for me to see that that sun symbol flies so high, and yet people can sit there and say racial comments to us Native Americans,” he added.

In an emailed statement, Gov. Michelle Lujan Grisham offered her most pointed remarks on the controversy.

“I have refrained from commenting directly over the course of this saga because I do believe it is not necessarily appropriate for the executive branch to dictate to the Legislature on matters of personnel — the same way I think it would be inappropriate if the roles were reversed,” she said. “At a certain point, though, circumstances warrant something more.”

Lujan Grisham added that if Gudgel were her employee, she would be fired by now and the results of the investigation would be made public.

“To Native families and communities and parents and students who are hurt: As governor of this state, I am sorry that this has happened, and I’m sorry it has happened in this way – with secrecy and a lack of clarity about the facts. … This individual, if the facts have substantiated the allegations, should not hold a position of public trust, end of story,” she said.

Sen. Bill Soules, D-Las Cruces, who heads the Legislative Education Study Committee, did not respond to an email request for comment and could not be reached by phone.

Speakers at the news conference also complained the state is dragging its feet in its response to Judge Sarah Singleton’s 2018 ruling in the Yazzie/Martinez case, and some advocates say they have even provided ideas and plans to the state about how it can help Native children — among the groups of students the lawsuit said were receiving an inadequate education in New Mexico.

The Tribal Remedy Framework, published in 2019 as a response to the lawsuit and based on recommendations made by several groups, calls for educational funding to be allocated directly to tribes for community-based program supports and tribal libraries, plus initiatives to boost the Native teacher workforce.

During the last legislative session, only $15.7 million of a $140 million request from several bills surrounding the plan was approved for such items. Regis Pecos, who resigned from his policy advisor post in the Legislature in response to the vote that kept Gudgel as as the LESC director, spoke out on the funding during a recent Legislative Education Committee session.

But a spokeswoman for the Public Education Department noted that much was accomplished for Native students during the session.

“Although we did not receive the entire amount, we had some historic victories in Indian Education this year,” department spokeswoman Carolyn Graham wrote in an email Friday.

Some at the news conference pointed toward the struggles faced by Native children and state policies they claim perpetuate those problems.

“We refuse to recognize that tribal people do, in fact, know best how to educate their children. That is systemic racism,” said New Mexico Voices for Children Director James Jimenez.

Correction: A previous version of this story incorrectly reported the amount of funding allocated for the Tribal Remedy Framework during the last legislative session. It was $15.7 million.

Find information on the education plan backed by all the state's tribes and pueblos at nabpi.unm.edu/tribal-remedy-framework.html

showing your true colors there Mr. Johnson, we were talking about education.

because of encouragement and and hard work, volunteering and helping native children my grandchildren are graduating from college and returning home to help.

Degrees in Anthropology, Chemistry, criminal Psychology, and medicine. I want all

native children and black children, and brown children, and white children to have a shot at success. We need better broadband, and people without pre conceived ideas on what is "good for us."

Seriously? That is so not going to happen in this poor state with the kind of politicians that get elected, never has and never will.

Having been a party in the Aamodt water rights adjudication, aka water theft by the pueblos, I can assure you every politicians who represented me locally, state, and federally was in their pockets. We non-pueblo people were not listened to and our water right stolen from us with no compensation. They are incredibly powerful politically because of that.

OK, they "demand action". What are they going to do when nothing happens of any consequence, as it has not for all NM's children over the many decades we have been in last place in education for all? Take away the Zia symbol?

This is not just a Native American problem. New Mexico ranks LAST in pre-K-12 education year after year, except for the years we are 49th and Mississippi is 50th.

Thank you Ms. Roller for the disturbing reminder - this is simply unacceptable.

Please also recall, Natives have been historically mistreated and marginalized as a group. How much less their access to simply a fair and proper public education?

Nonetheless, you bring-up a very serious issue for all New Mexicans and Americans.

[thumbup] But they have more politicians in their pockets than other people do.