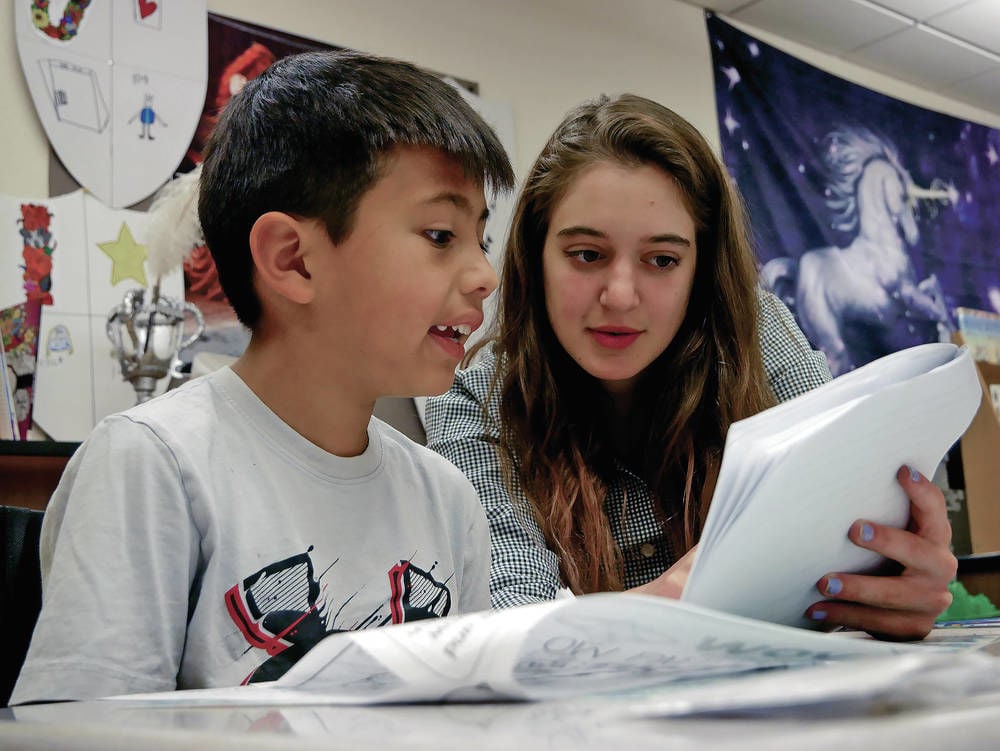 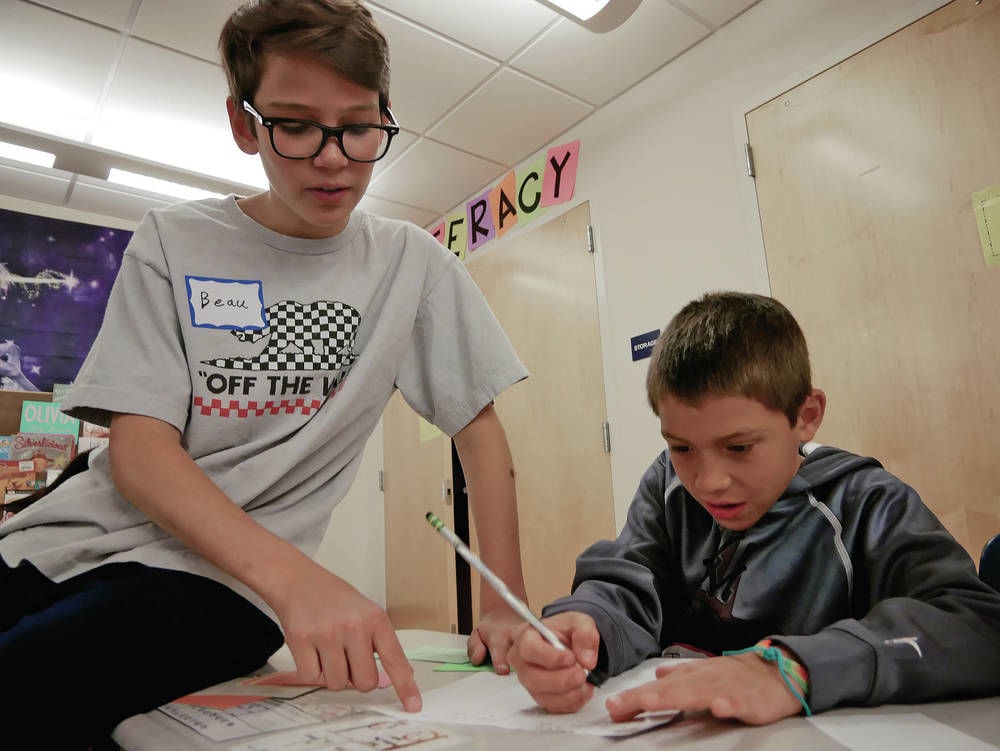 Beau Herndon, who will be a sophomore at Santa Fe High this fall, helps Jaydon Vigil, a fourth grader at Atalaya Elementary, during the Reading Quest summer camp Thursday at Sweeney Elementary. Matt Dahlseid/The New Mexican 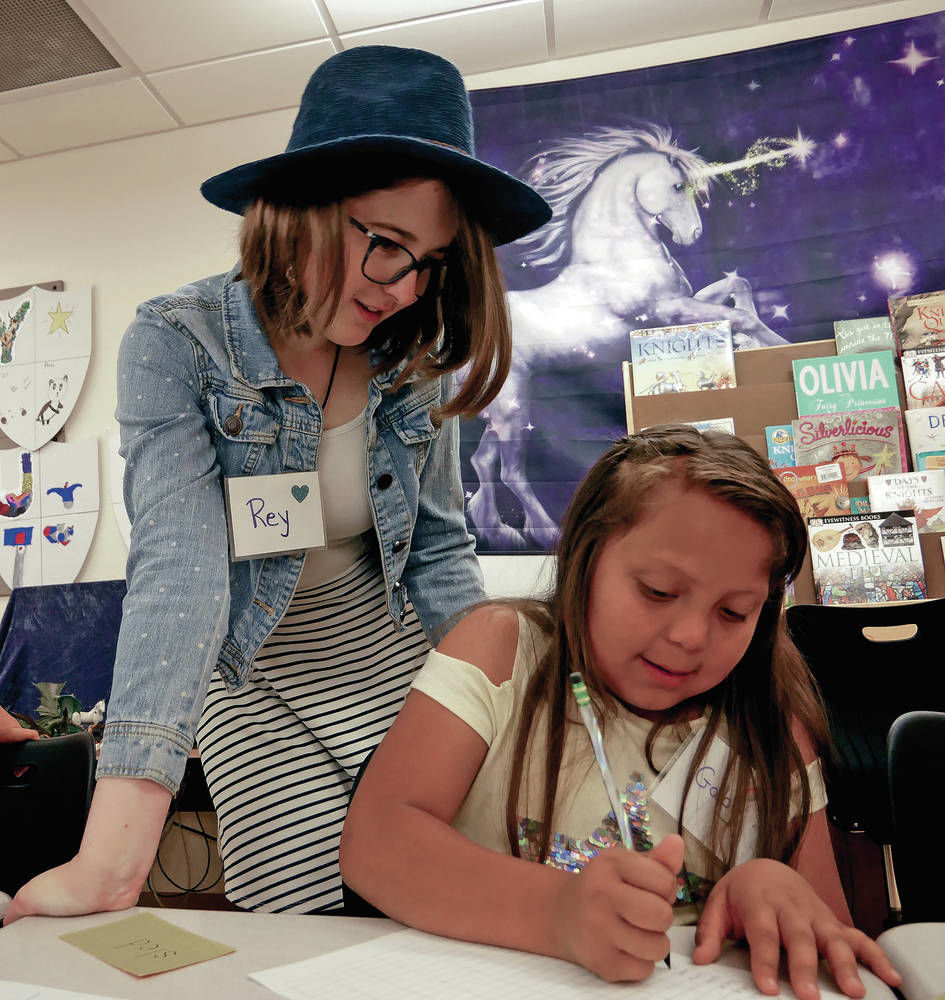 Beau Herndon, who will be a sophomore at Santa Fe High this fall, helps Jaydon Vigil, a fourth grader at Atalaya Elementary, during the Reading Quest summer camp Thursday at Sweeney Elementary. Matt Dahlseid/The New Mexican

But as they guide young learners through vowel pronunciations and help them get over fears of reading aloud, the teens experience a rewarding side of the profession that might prod them to at least entertain the idea of a future in education.

“Watching a kid make progress, it keeps giving me that extra push to want to be a teacher,” said Beau Herndon, who will be a sophomore at Santa Fe High School this fall, after a morning of rehearsing lines of a play with children enrolled in the nonprofit Reading Quest’s literacy camp at Sweeney.

Herndon was one of 25 teen tutors working with about 80 kids in the monthlong program.

“There are all these questions about the career, like, ‘Is it financially stable?’ But that’s not for me to worry about right now,” Herndon said. “I just like teaching kids.”

New Mexico needs more of its high school students to discover they like teaching kids.

An annual study by New Mexico State University found that out of 1,200 vacant positions for public school workers in the state in fall 2018, more than 700 of them were teaching jobs. To fill those classrooms, New Mexico is turning inward, creating systems to identify high school students who, like Herndon, might be interested in teaching and offer them a clear path through college and into a career that is both financially viable and publicly respected.

“Everything comes back to this issue. Everything we want to accomplish across the state depends on solving this shortage,” said state Public Education Secretary Karen Trujillo.

“It starts by identifying future teachers in high school,” she said. “Then we need to work with higher education to make sure they don’t lose them. And then we need to support them through the first five years of their teaching career, because that’s when they get lost.”

Trujillo said that when she first began examining New Mexico’s teacher shortage in 2014 as a researcher at NMSU, she found just six high schools with education career pathway programs. At the time, most students interested in education and hoping to find any kind of teaching or tutoring experience were left to seek out opportunities like Santa Fe-based Reading Quest on their own.

In 2015, Trujillo prepared the inaugural New Mexico Educator Vacancy Report as a way to track both educator vacancies and the pipeline of future teachers in New Mexico. The most recent report showed the number of teacher vacancies had jumped by more than 55 percent between 2017, when there 476 open jobs, and 2018, when there 740.

Trujillo also started the New Mexico chapter of Educators Rising — a national organization that provides a curriculum for an elective high school class on the fundamentals of teaching.

This past school year, Educators Rising organizers said 531 students at 42 high schools in New Mexico were involved in the program, and about 20 percent were expected to continue studying education in college.

According to state higher education data, a total of 300 undergraduates earned bachelor’s degrees in education in December and May from New Mexico’s six four-year public universities that offer teaching programs.

Trujillo said the next step is to add Educators Rising chapters to all of the state’s universities to steam line the path from high school education programs to college degree programs.

Anna Soeiro, who teaches sophomore English to special-education students at Santa Fe High, will begin teaching an Educators Rising class at the school in the fall. The course includes classroom observations and requires students to prepare and execute original lesson plans.

Soeiro said she jumped at the opportunity to prepare potential future educators while also working to change the stigma around teaching.

“I’m excited because so many of us teachers have been hemming and hawing and complaining about the shortage, and now I’ll have the chance to do something about it,” she said.

“The teens we teach know we don’t make a lot of money,” she added, “and they’ll question me everyday, like, ‘Why are you doing this?’ Now is a good time to change that perception.”

The perception that teaching is a profession with low pay and punitive working conditions scares away prospective educators. The state is aiming to change that narrative.

This year, the New Mexico Legislature and the Public Education Department have taken action aimed at helping aspiring teachers step into a more pleasant profession. The Legislature raised the minimum teacher salary from $36,000 to $40,000 and set the base pay for Level 2 and Level 3 teachers at $50,000 and $60,000, respectively.

The Public Education Department also is in the process of developing a new statewide standardized test to evaluate student progress in reading and math, as well as teacher performance, and the department already has overhauled the way it judges individual schools by replacing an A-F grading system that drew fierce criticism.

“The narrative around teaching and education has been so demoralizing that it was really hard for even educators to encourage kids to be educators,” Trujillo said. “Our job is to change that narrative.”

A more positive outlook for a career in education might have been helpful several years ago for Celeste Herrera, who said she knew when she was a student at Las Cruces High School that she wanted to be a math teacher.

Her teachers and other mentors talked her out of it.

“They said, ‘You’re good at math, so you should be an engineer, not a teacher. Math teachers are a dying breed. You’re not going to have a job,’ ” Herrera said. “I really took that to heart and decided not to pursue my passion.”

Herrera graduated from the New Mexico Institute of Mining and Technology with a degree in petroleum engineering in 2018, and she was all set to pursue a master’s degree in hydrology, when the classroom called.

She is now halfway through a two-year master’s degree program in secondary math education at NMSU and plans to teach at a high school in New Mexico when she finishes.

“The teachers I had in high school who encouraged me to be an engineer instead just wanted the best for me,” Herrera said. “Being a teacher won’t be the easiest or highest-paying career, but I know it will make me happy.”

To fill hundreds of teacher vacancies, New Mexico is making it easier for more students to discover a passion for the profession.

“I knew I was interested in the teaching field as soon as I did one after-school tutoring program,” said Herndon, the Santa Fe High student working with Reading Quest this month.

“I think when more kids are exposed to teaching,” Herndon said, “a lot will open their eyes to how rewarding it can be to help kids learn.”