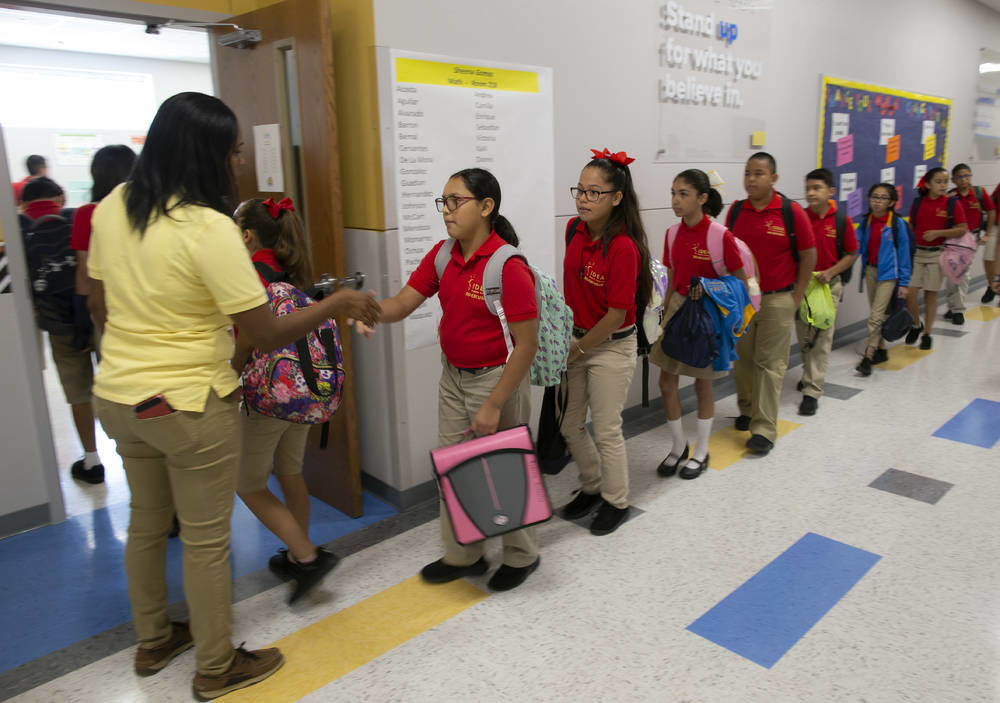 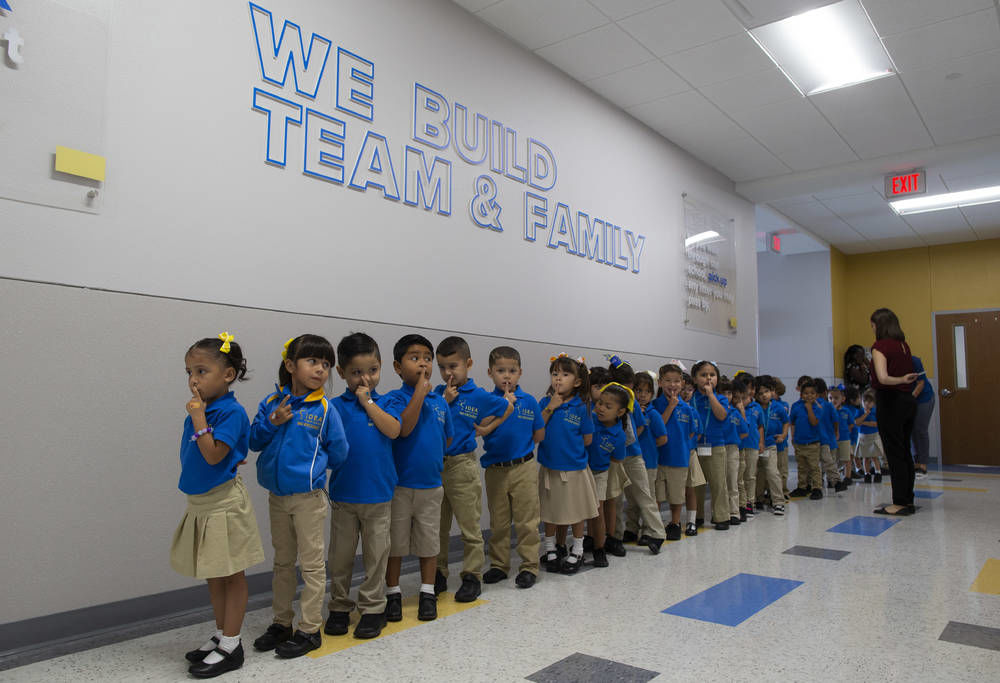 Pre-K students from a line outside their classroom at the IDEA Edgemere public school on its second week of operation in east El Paso, Texas, on Monday, Aug. 20, 2018. (Andres Leighton for Searchlight New Mexico) 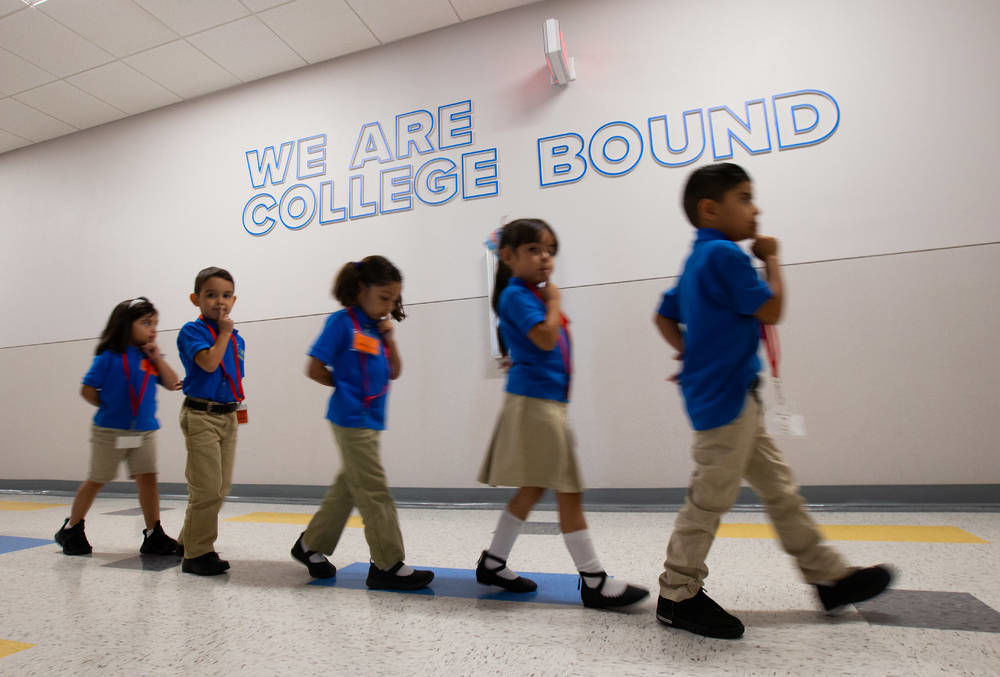 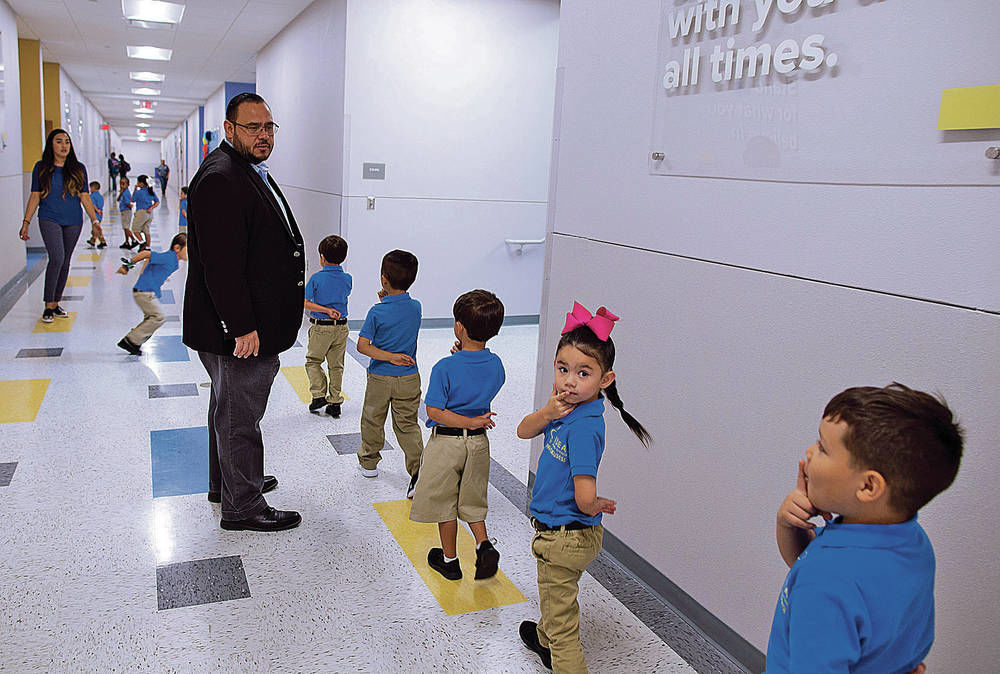 Ernesto Cantu, executive director of IDEA Public Schools in El Paso, observes Aug. 20 as kindergarten students walk to their classroom at the IDEA Edgemere on its second week of operation. Andres Leighton for Searchlight New Mexico 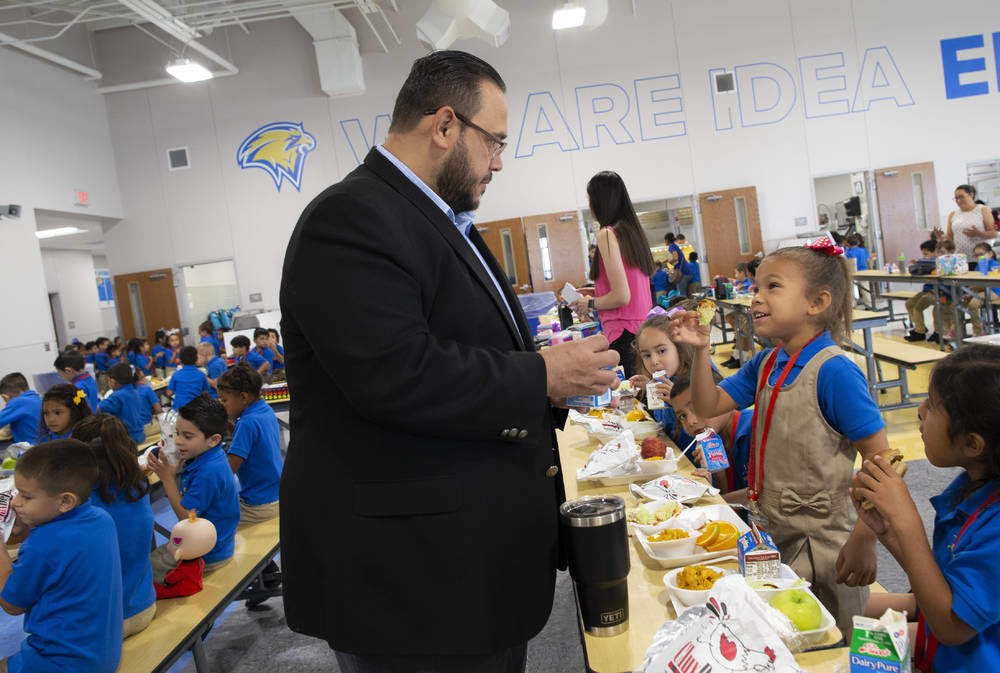 Ernesto Cantu, executive director of IDEA Public Schools in El Paso, interacts with a kindergarten student during lunch time at the IDEA Edgemere on its second week of operation in east El Paso, Texas, on Monday, Aug. 20, 2018. (Andres Leighton for Searchlight New Mexico) 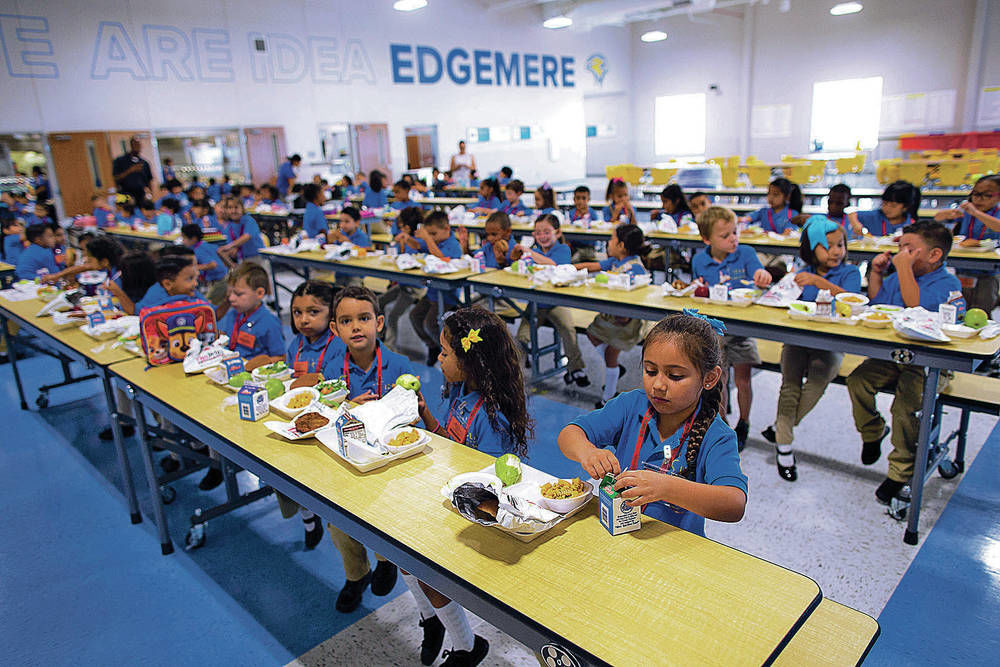 Pre-K students from a line outside their classroom at the IDEA Edgemere public school on its second week of operation in east El Paso, Texas, on Monday, Aug. 20, 2018. (Andres Leighton for Searchlight New Mexico)

Ernesto Cantu, executive director of IDEA Public Schools in El Paso, observes Aug. 20 as kindergarten students walk to their classroom at the IDEA Edgemere on its second week of operation. Andres Leighton for Searchlight New Mexico

Ernesto Cantu, executive director of IDEA Public Schools in El Paso, interacts with a kindergarten student during lunch time at the IDEA Edgemere on its second week of operation in east El Paso, Texas, on Monday, Aug. 20, 2018. (Andres Leighton for Searchlight New Mexico)

EL PASO — The kindergarteners of IDEA Edgemere walked quietly single-file down the hall, their uniforms embroidered with the school logo, left hands behind their backs, right fingers over their lips. Shh. Emblazoned on the wall above their heads, a sign read: “We do whatever it takes.”

It was only the second day of school, but they were already learning the rigors of IDEA Public Schools, a Texas nonprofit that targets low-income, Hispanic communities — and delivers academic results.

Its network of schools — now 79 and growing fast — regularly outperforms Texas public schools on standardized test scores in every subject matter and at every grade level. It boasts a 100 percent graduation rate and widely broadcasts the fact that every one of its graduates gets accepted to college.

“I think the No. 1 thing we do is believe in kids,” said Ernesto Cantu, executive director of the office in El Paso, where the network opened four schools in August. “If you don’t believe that every student should go to college, you don’t belong [at IDEA].”

Now, building on that success, the charter network — founded 18 years ago in a South Texas border town — is advertising aggressive plans to multiply. Those plans include expanding to 173 pre-K, elementary, middle and high schools from Texas to Louisiana and Florida by 2022 — a goal of serving 100,000 students compared to 35,595 today.

And it has its eyes on New Mexico.

No major, national charter management organization operates in New Mexico. But though state law prohibits for-profit companies from running charter schools, it does not preclude a large nonprofit from entering the market, according to Lisa Grover, senior director for state advocacy in New Mexico for the Washington, D.C.-based National Alliance for Public Charter Schools.

IDEA administrators met in March with Christopher Ruszkowski, New Mexico’s education secretary-designate, and got a “good” reception, Cantu said. The Public Education Department did not respond to numerous requests from Searchlight for comment.

IDEA has already hired away one of New Mexico’s top-performing educators. As principal of Anthony Elementary in the Gadsden Independent School District, Linda Perez raised test scores and helped make the school a Blue Ribbon winner in one of the poorest parts of the state.

She now serves as a “principal in residence” at IDEA Edgemere, a training program that will prepare her to lead one of the network’s future new schools in El Paso next year. Her educational philosophy — marked by a “no excuses” approach and early focus on college education — apparently meshed well with the charter mantra.

“Every child can and will succeed if given the opportunity,” IDEA proclaims on its website, a motto that serves as a powerful contrast to New Mexico’s explicit lack of expectations for at-risk students. In opening statements last year in a court case it recently lost, the Public Education Department laid bare its belief that some kids just can’t learn.

“The students are not like empty vessels that you take a pitcher and pour knowledge into them,” said Stephen Hamilton, the state’s attorney in Martinez vs. New Mexico, in May 2017. “Students that are economically disadvantaged, because of their situation, are not as receptive to education as other students are and have difficulty learning, and they have worse results.”

The IDEA model provides a highly structured academic environment, full of supports to ensure that every student not only graduates but also is admitted to college. Those supports include extended-day programs to help kids with homework, Saturday school, “rigorous pre-AP instruction” for middle schoolers, “AP for all” high schoolers, as well as academic and college counseling.

To receive a diploma, students must apply and be accepted to a four-year college, according to the student handbook. It is a rule written into the IDEA Public Schools’ charter in Texas. To help get them there, IDEA sends its students all over the country to visit colleges and universities. Last year, the network spent $3.9 million toward that goal.

Not every student makes it that far. The Texas Education Agency (TEA) doesn’t report attrition rates for charter networks, but IDEA spokesman Marco Carbajal said the network’s student “retention goal” is 90 percent. That could mean that as many as 10 percent of students do not return year over year.

The network — founded in Donna, Texas, by Teach For America alumni Tom Torkelson and JoAnn Gama — has many boosters, including the Bill & Melinda Gates Foundation, which has supported it with multiple grants. It has also won multimillion-dollar Race to the Top grants, a competitive federal program to “help trail-blaze effective reforms and provide examples for states and local education agencies,” according to the U.S. Department of Education.

But it has also faced its share of criticism, including claims that its policies artificially inflate metrics and fail to account for the potential “weeding out” effect of student attrition. The TEA gives the network a “B” overall in its school grading system, which weighs student performance on standardized tests, college readiness and graduation rate.

“A typical charter management organization has policies in place that allow them to make claims, like ‘100 percent of our kids apply for college,’” said David Knight, associate director for the Center for Education Research and Policy Studies at the University of Texas at El Paso.

“They can make that claim because it is a requirement at IDEA schools that in order to graduate you apply to college,” he said. “Some call that charter school math.”

The role of student attrition in charter school graduation rates is a controversial issue. Researchers have asked, but not yet resolved, a fundamental question: Are certain groups of kids prone to leave certain charters?

Another criticism has to do with the long-lasting academic gains behind such programs. IDEA is working to address to what extent those gains fizzle when its students move on to college.

IDEA graduates who attend Texas colleges and universities don’t perform as well as their public school peers, according to 2017 data from the Texas Higher Education Coordinating Board. That year, some 37 percent of the IDEA students who attended a Texas college ended up earning a 2.0 or less their freshman year — anywhere from a “C” average to a failing grade — compared to a quarter of high school graduates generally.

Cantu said IDEA Public Schools has acknowledged the issue and is analyzing its students’ performance in college. While hand-holding ensures high school success, it may backfire in the college environment where kids need to make their own way.

“We review GPAs and we’re purposely proactive in providing support,” Cantu said. “While in college, it’s up to them to look for that support.”

Like many of his students who come from poverty, Cantu grew up in a family of migrant farm workers in the Rio Grande Valley. He has worn many hats in the IDEA network, including as principal of a school in his hometown of Las Milpas, a former colonia on the Texas-Mexico border.

The IDEA network currently serves a student population that is 93 percent Hispanic and 87 percent economically disadvantaged, according to the TEA. More than a third of its students are English-language learners.

Between 2014 and 2016, the latest year for which data is available, the charter’s students topped Texas students generally on the state’s standardized test scores in nearly every subject matter and grade level. In that same period, 100 percent of IDEA’s high school students graduated on time, according to TEA.

The program has occasionally faced strong local opposition as it has moved into new areas.

Where IDEA Edgemere opened on the far east side of El Paso, new single-family houses are rising in the desert by the hundreds. The local Socorro Independent School District issued a $448.5 million bond in 2017 to accommodate that growth, and pay for new schools and renovations for its 46,300 students.

When the district discovered IDEA’s plans, its administrators fought back hard.

Superintendent Jose Espinoza organized 3,000 teachers and volunteers to go door-to-door and flaunt the district’s own successes and programs. They knocked on some 10,000 doors, according to a SISD spokesman, touting the public schools’ graduation rate of 91.5 percent; an extended school day for kids struggling with academics; art, music and sports; and a year-round school schedule.

The effort took a toll on IDEA’s recruitment plans. The charter, which enrolls its students through a lottery, had fielded roughly 3,000 applications in El Paso but by the first week of school had missed its enrollment target of 1,068 by more than 100 children.

“Socorro has done a really good job countering what we’ve done,” Cantu said, even as he shrugged off the impact.

With school about to let out at IDEA Edgemere, parents waited with engines running in 100-degree heat. Ariel Navarro, driving a bright blue pickup, said she was thrilled to enroll her 5-year-old son, Junior, at an IDEA school. She comes from south Texas and knew IDEA’s reputation.

“What really stood out,” she said, “is the college focus.”