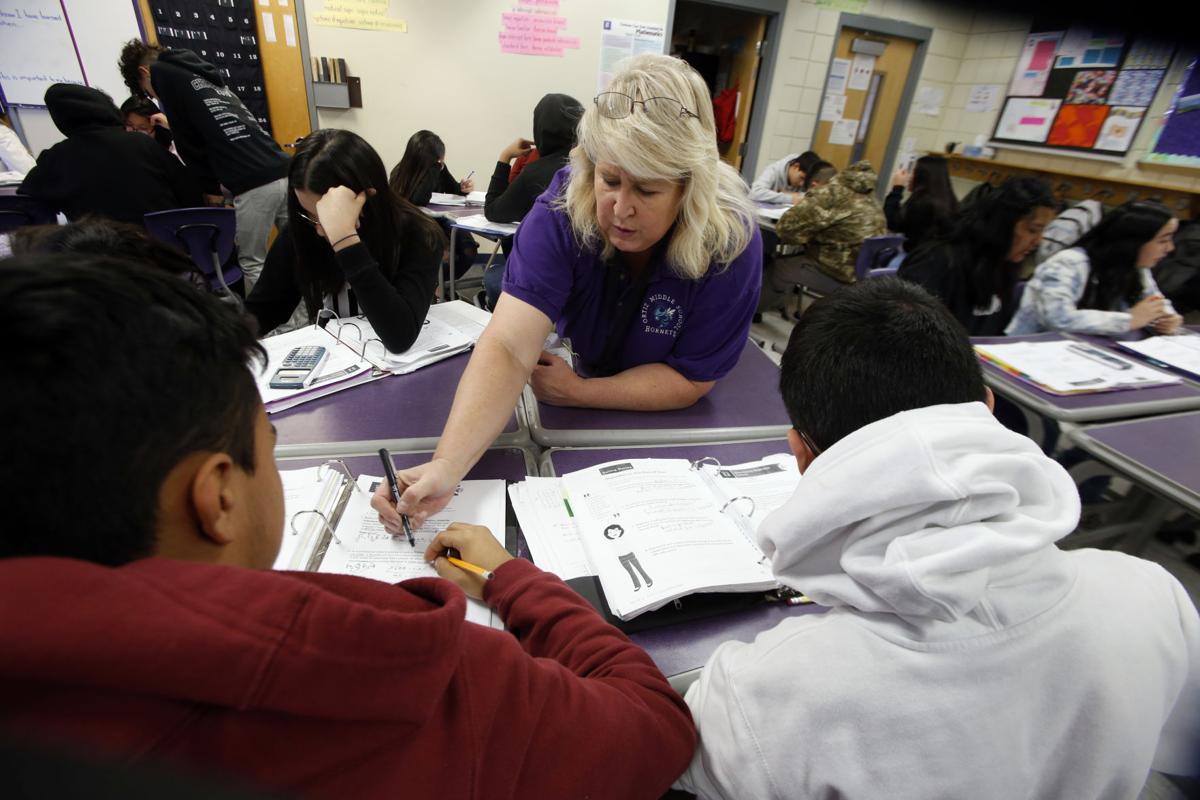 Debbie Parke, an eighth grade math teacher at Ortiz Middle School, works Thursday with Luis Hernandez, 13, left, and Mauricio Cantero, 14. Parke has 46 students in that class and two other classes with 43 and 45. 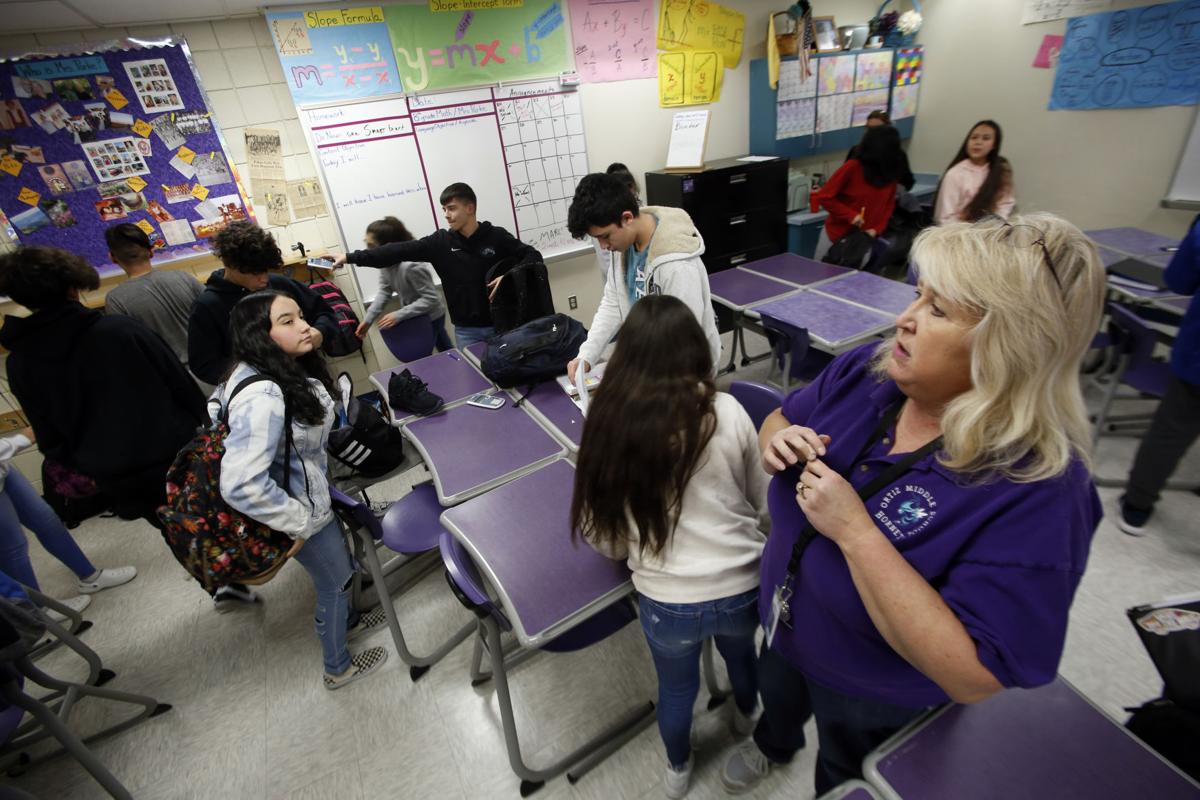 Debbie Parke, an eighth grade math teacher at Ortiz Middle School, speaks to students before lunch Thursday. Parke has 46 students in the class and two other classes with 43 and 45 students.

Debbie Parke, an eighth grade math teacher at Ortiz Middle School, works Thursday with Luis Hernandez, 13, left, and Mauricio Cantero, 14. Parke has 46 students in that class and two other classes with 43 and 45.

Debbie Parke, an eighth grade math teacher at Ortiz Middle School, speaks to students before lunch Thursday. Parke has 46 students in the class and two other classes with 43 and 45 students.

This fall, he had a chance to ask a certified science teacher for an explanation of atoms and electrons.

The Ortiz Middle School eighth grader knows firsthand the effect an experienced teacher can have on a student’s learning versus a long-term substitute, who doesn’t require a teaching license to lead a classroom when there is no full-time educator available — a problem that persists throughout the state’s public schools.

At south-side Ortiz, one of only two large public middle schools in Santa Fe, it’s a problem students and staff face year after year, with lasting effects.

Torres said his math class this year, headed by a certified teacher, has about 40 students — but a crowded room with a professional teacher beats a small class with a sub, he said.

According to district officials, four of Santa Fe Public Schools’ five full-time teacher vacancies are at Ortiz — seventh grade history, science and math, and eighth grade math. The number is down from seven vacancies at Ortiz earlier this year. But it’s still putting pressure on staff and students.

Ortiz teachers say the shortage leads to two difficult scenarios: Students already struggling to catch up to grade-level math and reading skills are either crammed into large classes where they get little individual attention or they are in a class led by a substitute.

While some subs are retired teachers or aspiring teachers with formal education and training, many have few qualifications. The result, teachers say, is a lost year for students, which can have an effect for years to come.

Max Quintana, a sophomore at Capital High School, said he still feels the impact of missing a math teacher at Ortiz in seventh grade.

“Sometimes I have trouble remembering some of the basics. I feel there are concepts I should know, but I have to go back to reteach myself because I missed them in middle school,” Quintana said.

“I think the absence of teachers in middle school really impacts the job of teachers in high school,” he added. “They have to spend time reviewing the basics, and then some students are frustrated by two or three years of trying to pass algebra and sort of give up.”

There are many reasons for the teacher shortage at Ortiz, where more than a third of its roughly 600 students are English-language learners, compared to 24 percent across the district, and 100 percent are from low-income households.

Despite its challenges, Ortiz enrolls 100 students in a medical career pathway that continues down the street at Capital High School. The program offers students a chance to become licensed practical nurses before they graduate from high school.

There are also entrepreneurship classes similarly aligned with a program at Capital.

Some of Ortiz’s challenges lie outside the school’s walls, such as a lack of housing that new teachers can afford.

Principal Felicia Sena said over the past three years, at least 10 teachers from out of state have accepted an job at the school, only to decline the offer after learning of Santa Fe’s cost of living.

“That’s so frustrating because you feel great at the start of the summer. ... Then it’s the end of June, and you start getting those ‘I can’t find housing’ messages. Then by July, you’re back to five vacancies, and by then everybody has taken jobs elsewhere,” Sena said.

Veronica García, superintendent of Santa Fe Public Schools, said there also are “assumptions about Ortiz that are not fair.”

“I think there is a perception in Santa Fe that has persisted that our middle schools are tough,” García said.

Teachers agree the community’s perception of the school does not reflect the reality. “I feel defensive a lot when I’m talking to people about Ortiz because there is a perception in the community this is a bad school,” said art teacher Bill Johnson, who is in his fifth year at Ortiz. “A guy said, ‘my condolences’ the other day when he found out I taught here.

“That’s not my experience at all,” Johnson said. “These kids have challenges that kids on the other side of St. Francis [Drive] maybe don’t have, but they’re good kids and they deserve a full staff of teachers for each of their classes.”

This semester, Johnson has given up one of his planning periods to teach a section of seventh grade New Mexico history.

Eighth grade math teacher Debbie Parke has taken on the work of two, with four sections of around 36 students each.

“I wish she had an assistant,” said eighth grader Andrew Obispo, who is in one of Parke’s classes. “Without an assistant, she has to do it all by herself. An assistant could take a group of students to another table and help them where they’re struggling.”

Ortiz is far from the only school in the state — or nation — struggling to keep teachers. A statewide report by New Mexico State University in October found 644 teacher vacancies and 410 positions open for teaching assistants, counselors, psychologists and other staff.

She has called retired educators in hopes of enticing them back to the classroom, posted advertisements across the West, as well as in Puerto Rico and Spain, and has transferred staff — sometimes against their will — into classrooms to replace long-term substitutes.

In December, García identified 15 of the district’s most pressing teacher vacancies and tried to fill them with interventionists, or certified teachers who provide instruction in small groups to students who need extra support; literacy and technology coaches; and other staff with teaching licenses who work in other roles.

According to the district, through a combination of voluntary and involuntary transfers, the initiative, dubbed Project Put Students First, filled 10 of the district’s 15 openings.

Of the five remaining vacancies, one is at Early College Opportunities high school — an alternative dual-credit program in which students earn job certifications and associate degrees through community college courses — and the other four are at Ortiz.

In the fall, the school board debated a controversial proposal to close three elementary schools — in part to address declining student enrollment across the district and the costs of maintaining aging facilities, and in part to tackle what proponents of the plan called inequities between south-side schools like Ortiz and small elementary schools in the downtown area that serve fewer numbers of low-income kids.

The proposal failed, but the board vowed to study the issue.

“Ortiz has the most obstacles in the district,” science teacher Carl Krings told the school board at the time. “We have filled positions with long-term subs and on a daily basis split classes among teachers for student supervision.

“Ortiz has accomplishments and offers a rigorous curriculum despite our shortages,” Krings added, “but imagine student achievement if teachers weren’t hindered by doing the jobs of missing colleagues?”

Citing his heavy student load, he urged the board to change the way it addresses student-teacher ratios and alter teachers’ school assignments.

Ortiz Principal Sena acknowledged she worries about teacher burnout while marveling at her staff’s dedication to students.

Johnson said he hears a question often: “Are you coming back next year?”

Carolyn Salazar, an English teacher at Ortiz, has heard it too.

“I’ve already gotten that question multiple times,” she said, “and I’ve only been here half the year.”

In middle school a class of 46 is insane. Consider that college basketball has a ratio of 3 to one to teach bouncing a ball. College football is about 8 to 1. So fire the superintendent. The lack of urgency to is outrageous.

This school district is so effed up. Excuses, excuses. Blame and more blame on the east side schools. The east side schools are better not because they are richer, but the parents expect their children to get an education and they participate in the schools. Ortiz has a student body where the parents believe education is the responsibility of the government: 100 percent of the students at Ortiz are on free or reduced lunches and other assistance. As a local and a

product of our local school system, I’m pretty tired of our taxes being used for people who don’t value an education and only use it as day care where teachers take care of kids, make sure they are fed, and provide emotional support that obviously lacks in these homes. Teachers in this town have taken the place of what parents are supposed to do and that is a reflection of how some countries (Mexico) don’t want their people educated. Time to just get tough with how we educate are kids and stop pandering to the idea that they can’t idea is because the are disadvantaged because they are poor. Poverty is everywhere, always has been and always will be, and it’s not an excuse for poor results such as our Santa Fe public schools have been producing for the past few decades, which by the way coincides with about the time our city decided to become a sanctuary city.

There is a slight error - I, Debbie Parke, have 4 classes of 40-46 students and a small class of 22 students taking High School Algebra I as 8th graders.