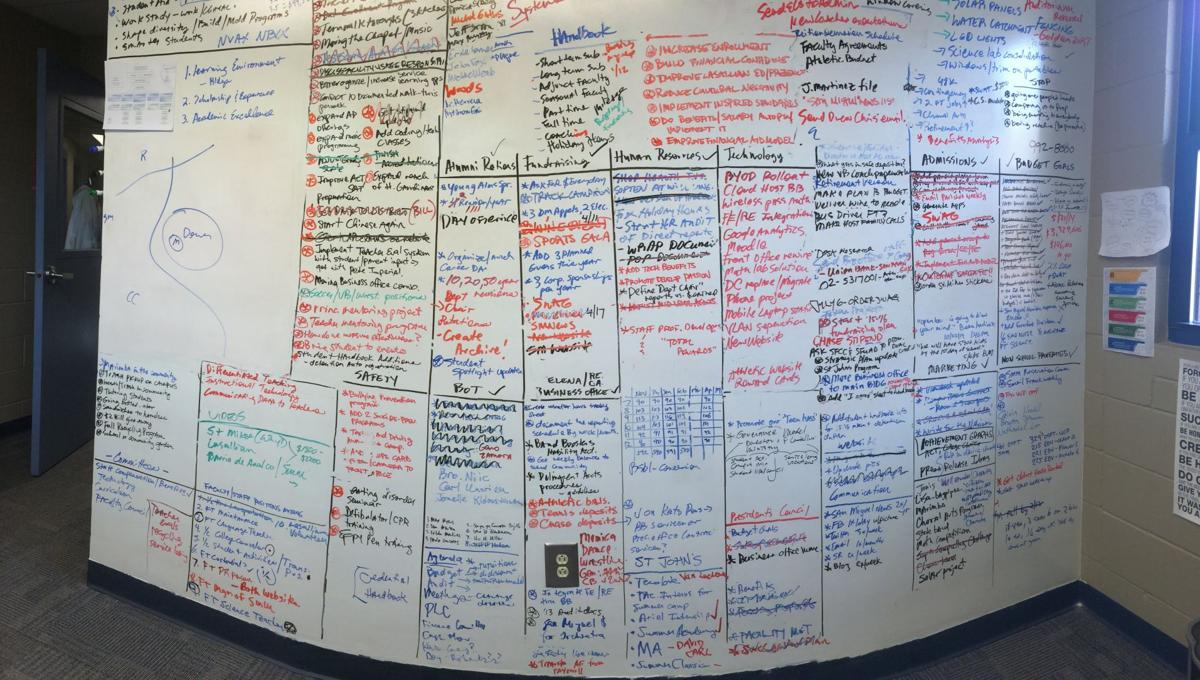 A wall filled with notes in Taylor Gantt’s office at St. Michael’s. 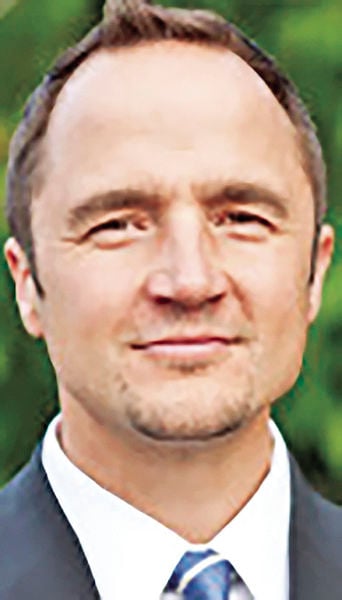 After spending more than a decade at St. Michael’s High School, President Taylor Gantt announced this week he is stepping down and will take on a new position as the finance chief at United World College USA near Las Vegas, N.M.

“Eleven years is a pretty good run at any one place, so I just feel ready for something new,” Gantt said in an interview Tuesday. “I’m really proud of all we accomplished at St. Mike’s and excited for this new opportunity at UWC.”

Gantt is known at St. Michael’s High for his ideas, said Susan Patten, vice president of admissions and advancement.

He has used a special paint to turn a wall of his office into a dry-erase board that he fills with his thoughts and strategies.

“Every meeting, he’ll say, ‘Don’t freak out, I have another idea,’ and go write on his wall,” Patten said. “And as much as we’ve had some fun at his expense for it, at the end of the day, he’s had a lot of good ideas and has moved the school forward.”

Gantt started as a substitute teacher at St. Michael’s in 2009 and has spent the last six years as president, leading the private Catholic middle and high school, which enrolls around 450 students, through a period of financial troubles and a major renovation.

“The school had a lot of financial issues six or seven years ago. We really straightened out those out,” Gantt said. “We went on a really aggressive fundraising campaign to remodel the school, building by building.”

He estimated he helped raise around $3.5 million during his six years as president to renovate classrooms, a library and the cafeteria.

He also oversaw the addition of a six-lane running track.

“Trying to maintain that old school built in the 1960s was a struggle,” said Diahann Larson, director of Lasallian ministry, who has been at the school for 28 years. “We’ve gotten a nice face-lift.”

In addition to improving facilities, Gantt is credited with raising teachers’ salaries and starting a new medical careers program.

Gantt told the St. Michael’s Board of Trustees on Sunday of his decision to leave in June, when his contract expires. He has accepted the position of chief financial and operations officer at United World College, an International Baccalaureate boarding high school with a campus in Montezuma that serves about 230 students in grades 11 and 12 from all over the world.

According to a news release from St. Michael’s board Chairman Nicholas Miller, an interim president will lead the school in 2020-21 while the trustees conduct a search for Gantt’s permanent replacement.

One of the things he’ll miss most about St. Michael’s is its storied sports programs, Gantt said.

“When it comes to football and basketball and sports in general around Santa Fe, everybody hates St. Mike’s,” he said. “I’m going to miss that.”

He still has a daughter at the school, Gantt added, and plans to remain active in the St. Michael’s community.